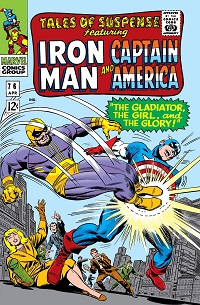 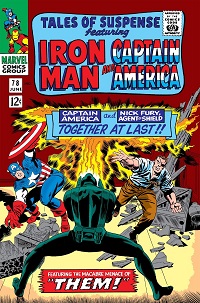 I’m taking these four issues together because they all deal with Agents of S.H.I.E.L.D. … kind of. Notably, the first three issues introduce a new reason of Cap to despair his past—the loss of a woman he knew and loved during World War II, whom we now know to be Peggy Carter—and a new reason to appreciate the present, namely Peggy’s lookalike niece sister, Sharon. And the final issue reunites Cap with Nick Fury, now a colonel and running S.H.I.E.L.D., which Cap really really wants to be an Agent of.

WARNING TO THE FAINT OF HEART: There be romance ahead, much of it drawn by a master of the form, John Romita, Sr.

Remember that, at the end of issue 74, Cap started falling into the ocean after destroying the combined Sleepers. Appropriately, issue 75 begins in mid-fall…

Through some dazzling athletics—and thanks to “his superb, power-packed body in the peak of condition” and “his matchless athletic prowess at its prime of perfection”—he hits the water well… but still loses consciousness, only to be picked up by a passing freighter. (Check out Stan’s unparalleled alliteration in the exposition in the first panel.) 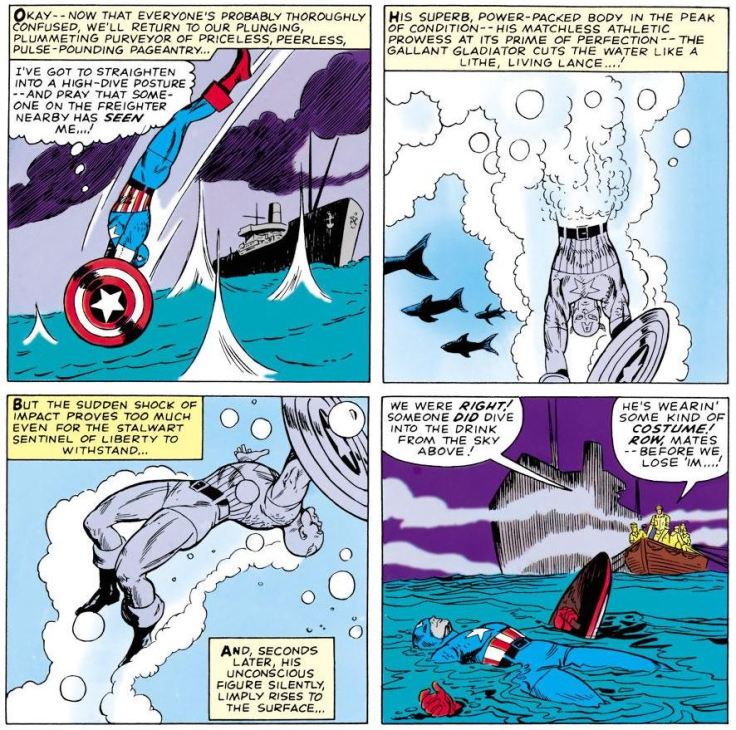 Later, he descends into despair, thinking back to all he’s lost—including Bucky, his old taskmaster Sergeant Duffy from Fort Lehigh (?), and, brand new to Cap’s story, a mysterious woman from the war who we now know as Peggy Carter—as well as his role in this new world.

“Perhaps it’s Steve Rogers who’s the legend—and Captain America who is the reality!” is the kind of talk we’re more used to hearing from Batman (“Is Batman the mask—or is it Bruce Wayne?”) or Superman (“Deep down, am I really Clark Kent or Superman?”). We’ll see much more of this from Cap is coming issues as he continues to struggle with his absence of a personal life outside of being the Sentinel of Liberty, especially as he finds himself getting closer to… well, just wait.

(Also note the hint of existentialist angst in asking if he was “born to be” Captain America and nothing more, suggesting that he feels his destiny was chosen for him rather than by him.)

His “gloomy reverie” continues as he walks the streets of Manhattan, until he sees a familiar face. 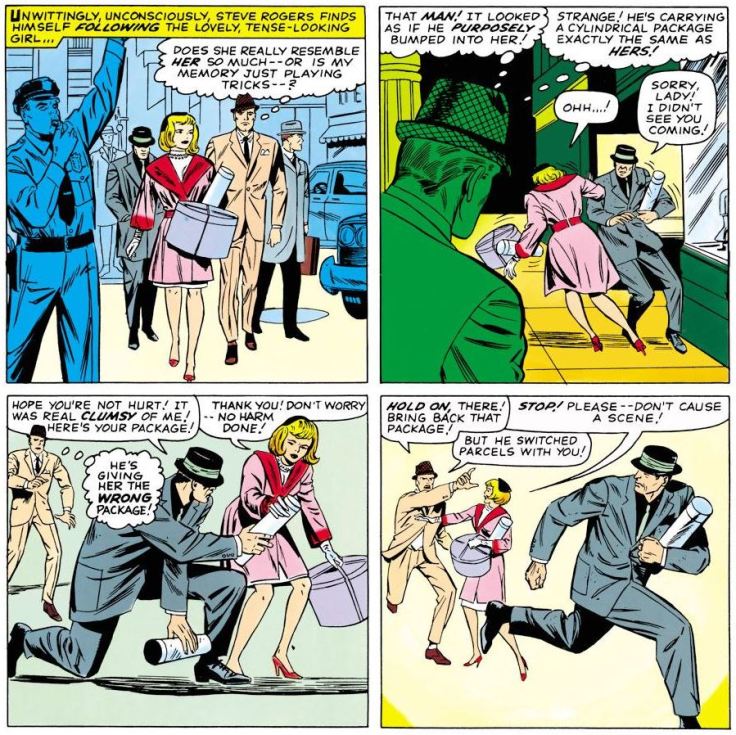 The mystery of the parcel will become important soon, but for now Steve is hung up on the woman herself, who reminds him of his lost love from the war.

On the next page, we find out why (although neither woman’s name will be revealed for quite some time, maddeningly).

At this point, roughly twenty years after the end of World War II, Peggy and Sharon can believably (if barely so) be sisters, but later, as the time span since 1945 widens, they are retconned to be aunt and niece.

Oh right, the parcel… it contains Inferno 42, a powerfully explosive element extracted from a meteorite, that a shadowy cabal was planning to use to destroy New York City until it was stolen by S.H.I.E.L.D. (I wonder why Sharon would have it, then, hmm…)

And who have they hired to retrieve it but Batroc the Leaper, making his first appearance in this very issue (and giving Jack Kirby another acrobatic fighter to draw).

I mean, just look at these panels! Stunning.

Note Cap’s criticism of Batroc’s being a mercenary, selling his skills to anyone with no obedience to principle.

While they are fighting, Sharon leaves with the parcel, and once they stop, Batroc reveals the danger inside—and the true nature of the woman carrying it. 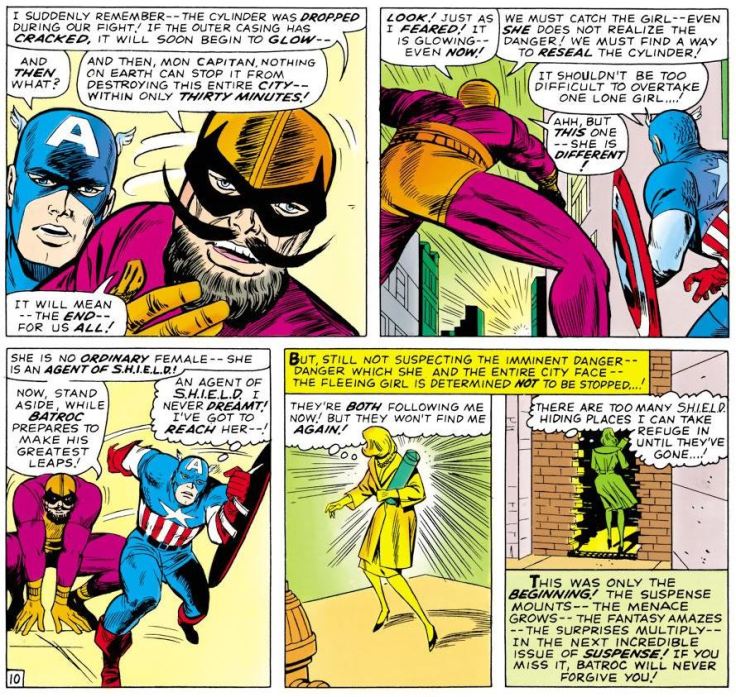 “Stand aside, while Batroc prepares to make his greatest leaps!” Gotta love that guy.

As issue 76 opens, Cap and Batroc follow Sharon into a S.H.I.E.L.D. safe house and have to fight their way in—and although the Legend can work alongside the Leaper to save Sharon and New York City, he draws the line at being friends! 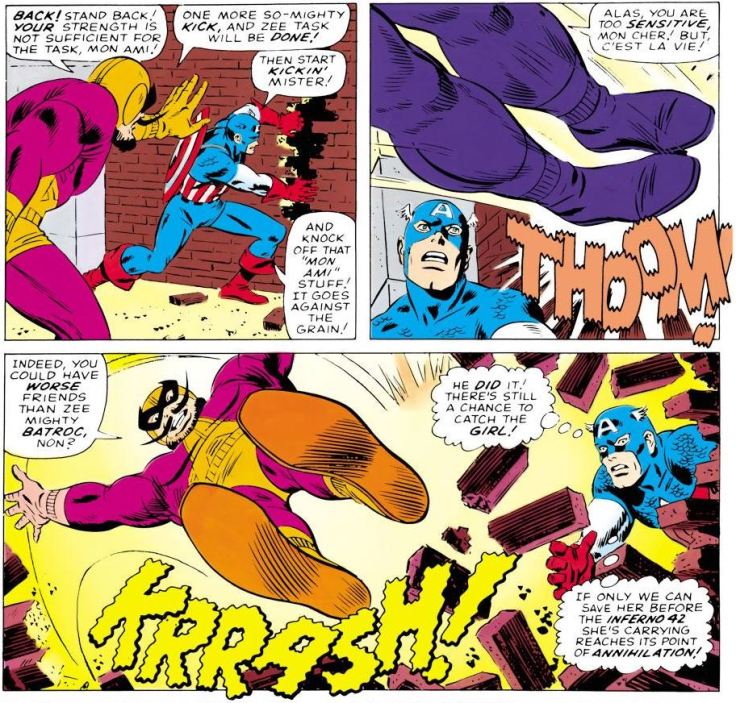 Sharon is alarmed to see the two working together, suspects the worst, and triggers the safe house’s booby traps. (Also, we see a classic Romita panel, as he takes over pencils on this issue and the next.)

By the time Cap and Batroc get through the defenses to Sharon, she has already succumbed to the effect of holding the Inferno 42 canister—but Cap is still hung up on her resemblance to Peggy. 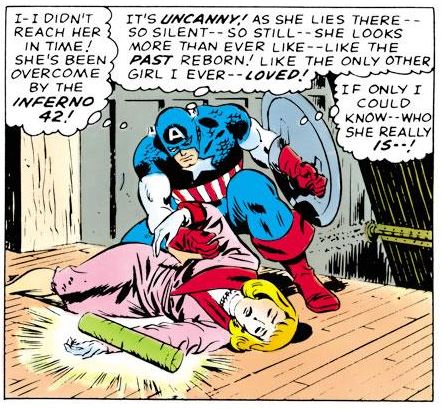 Just then Batroc returns, and we see how easily he deals with Cap’s mighty shield.

With another powerful kick Batroc takes Cap out and escapes with the canister, returning it to the men who hired him… but who should return to foil their evil plans? 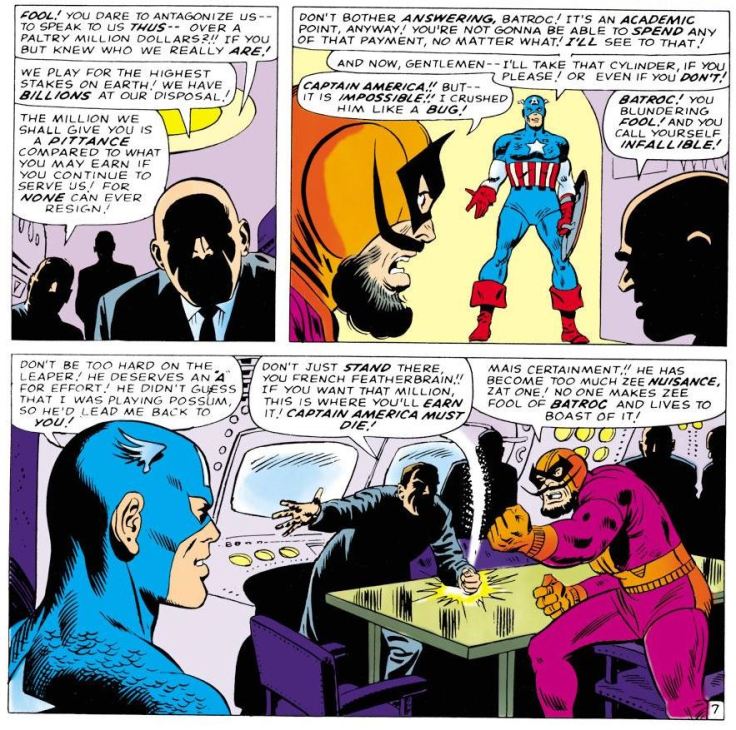 Not like Cap to play possum—a bit too devious for him—but we can assume that circumstances demanded it. (And Batroc thought they were friends, tres triste.)

While Cap and Batroc fight (again), the men escape with the canister, and even though Cap tells Batroc he must be brought to justice, he acknowledges he has to chase the men instead—strangely, less to get the explosive back and more to see them punished. 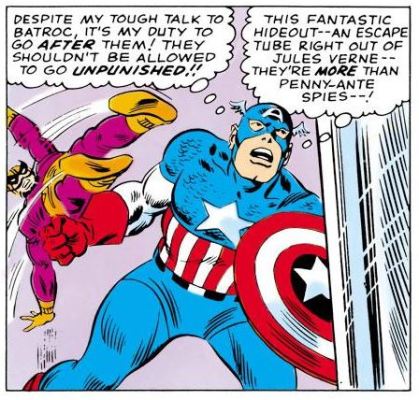 But Cap and Batroc continue to fight and the Leaper flees, freeing Cap to turn his attention back to Sharon in the final panels of the issue—and waxing very romantic about her. 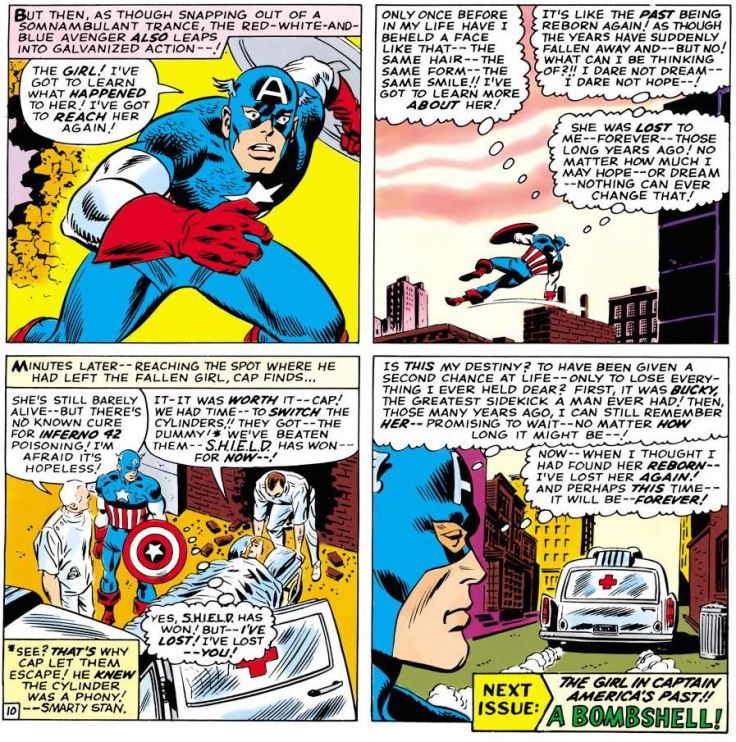 (Thanks, Smarty Stan, but that’s too clever by half.)

Here we see Cap confronting loss yet again, thinking he may have found the only woman he loved—albeit “reborn”—only to lose her before even learning her name.

In issue #77, we learn more about the Great Lost Love of World War II… but not her name. (We won’t learn that until Captain America #162!)

It starts out with Cap watching a WWII newsreel showing troops celebrating a victory while he remembers he didn’t feel much like celebrating. 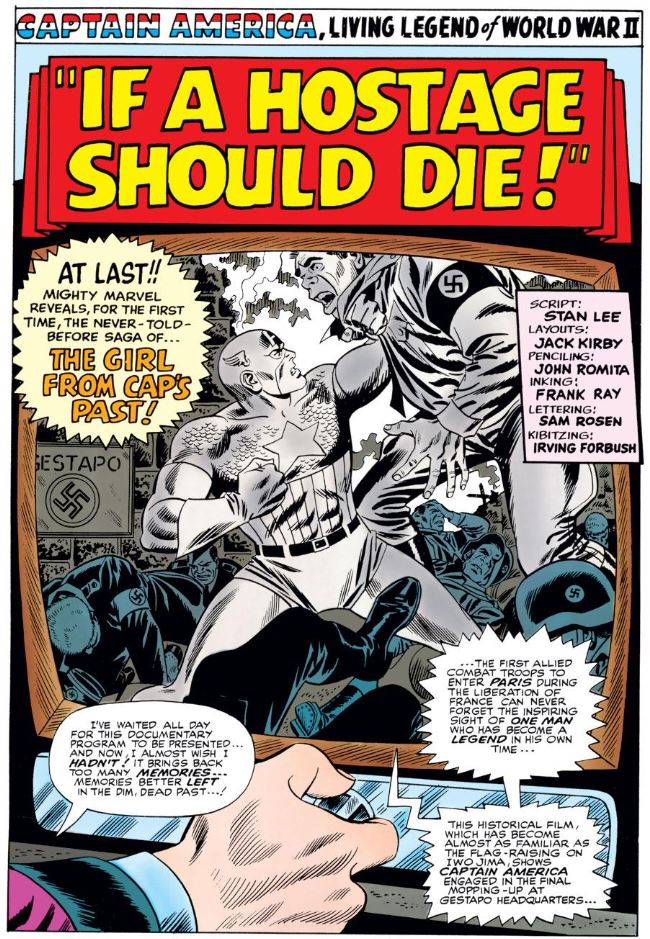 And soon we know why. 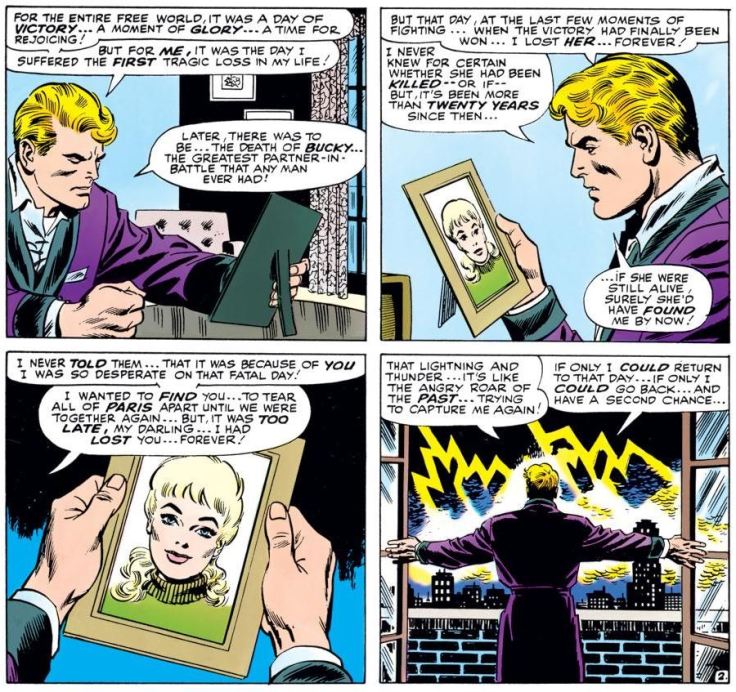 Note that Cap holds the loss of Peggy—whether or not she survived the war—to be the first tragic loss of his life. (The death of his mother before he became Captain America must not have been established yet.)

Most of the story is a WWII mission, during which we see Cap and Peggy together, proclaiming their love for each other—and with Peggy giving Cap the what for after his sexist comments (which, to his credit, he quickly acknowledges). 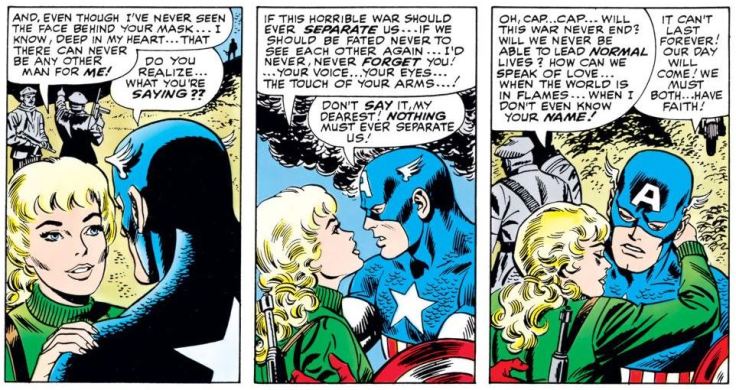 Soon, the lovers are separated… by duty! (The conflict between love and duty will characterize most all of Captain America romantic relationships from this point on.)

In these posts I usually highlight Cap’s virtues—as well as his lesser moments—but here I must point out Peggy’s bravery after being captured by German troops. For anybody who fell in love with her after Captain America: The First Avenger or her Agent Carter series, you might be happy to know she was a hero from her very first appearance.

Nonetheless, as she marches to her fate after defying her captors, she is thinking of Cap.

When Cap gets a chance in his own battle, he asks after Peggy…

…and when he gets to the Gestapo headquarters, we see the scene captured in the newsreel from the opening of the chapter, and discover why Cap was not celebrating with the rest of the troops.

His frantic search is frustrated by the revelry… 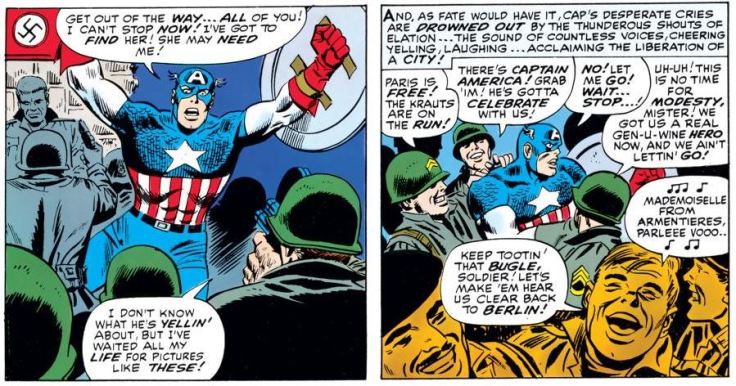 …until he realizes that his need to find Peggy shouldn’t detract from his fellow soldiers’ joy, and he joins the celebration, in body if not in spirit.

And, like ships in the night, the lovers pass by each other, unaware that the other is there.

The mystery of Peggy remains—and will remain just that for quite a while—as Cap again descends into melancholy, adding yet another loss to his burden of grief and guilt.

Finally, in issue #78 we see Cap’s first meeting with Nick Fury, Agent of S.H.I.E.L.D., after their one and (as of this time) only meeting in Sgt. Fury and His Howling Commandos #13—and after Cap sent him a letter in Avengers #16 asking to join S.H.I.E.L.D.

Also, for the first time outside Fury’s current series in Strange Tales, we meet A.I.M., though here they’re simply known as “Them.”

We join our hero in the training room in Avengers Mansion (in a classic Kirby pose.)

Cap and Nick renew their short acquaintance, the Agent of S.H.I.E.L.D. learning not to grab little green balls of Kirby-esque brilliance that Cap is actively trying to avoid.

Fury came to get the Avengers’ help in stopping AIM/Them from developing artificial men—but Fury and Cap are surprised when those artificial men come looking for them instead, giving us some nifty fight scenes in which Nick Fury shows off his karate skills. 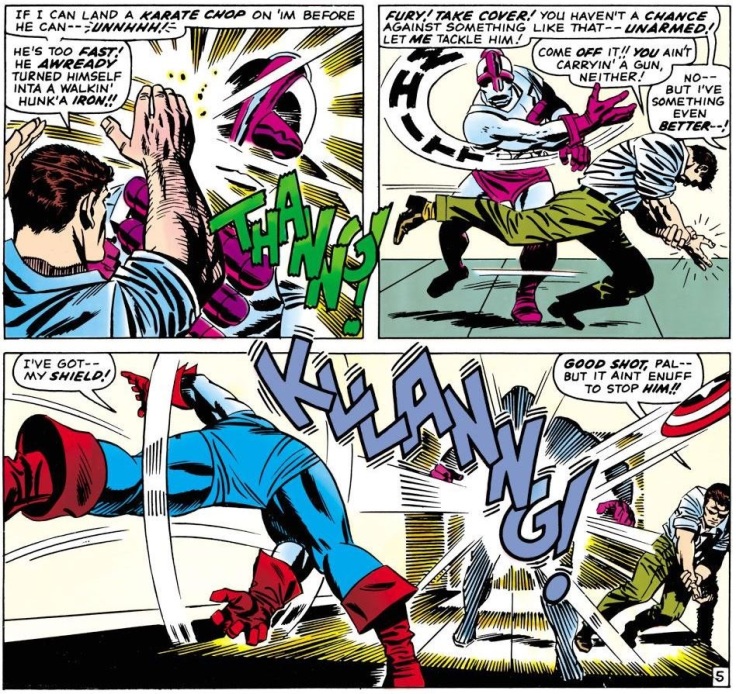 Of course, Cap has to give Fury a lesson on leverage.

After Cap and Fury defeat the artificial man, they tie up some loose ends—including Cap’s job application. 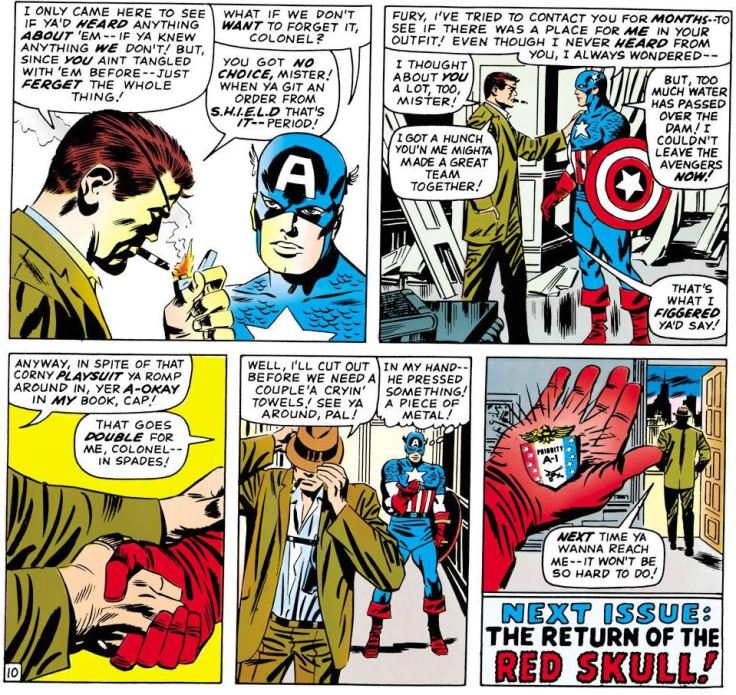 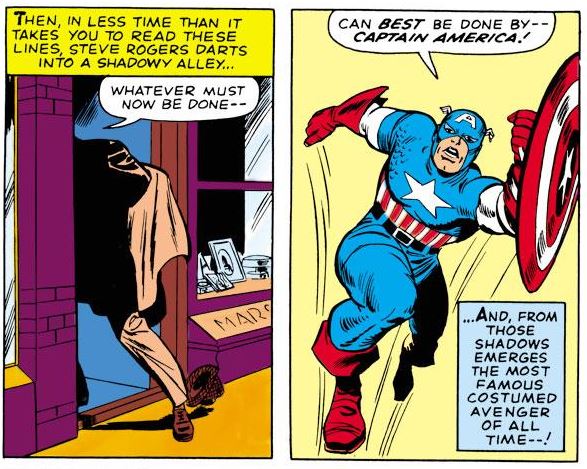