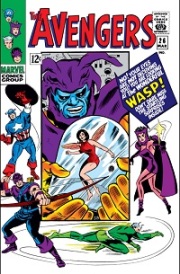 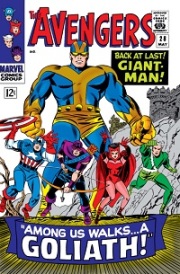 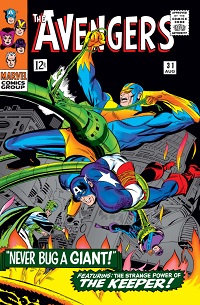 These six issues see two current Avengers members leave and two originals return… and even more momentous, Captain America and Hawkeye start to heal their wounds (as Clint gets a new punching bag).

Issue #26 opens with Cap trying to show his fellow Avengers the new secure messaging device Tony Stark dreamed up, but Hawkeye has no patience for it. Interesting, Quicksilver takes him to task while handing a fine compliment to Cap.

Clint and Pietro squabble for a bit before Cap interjects (which Wanda, as always, admires in silence). 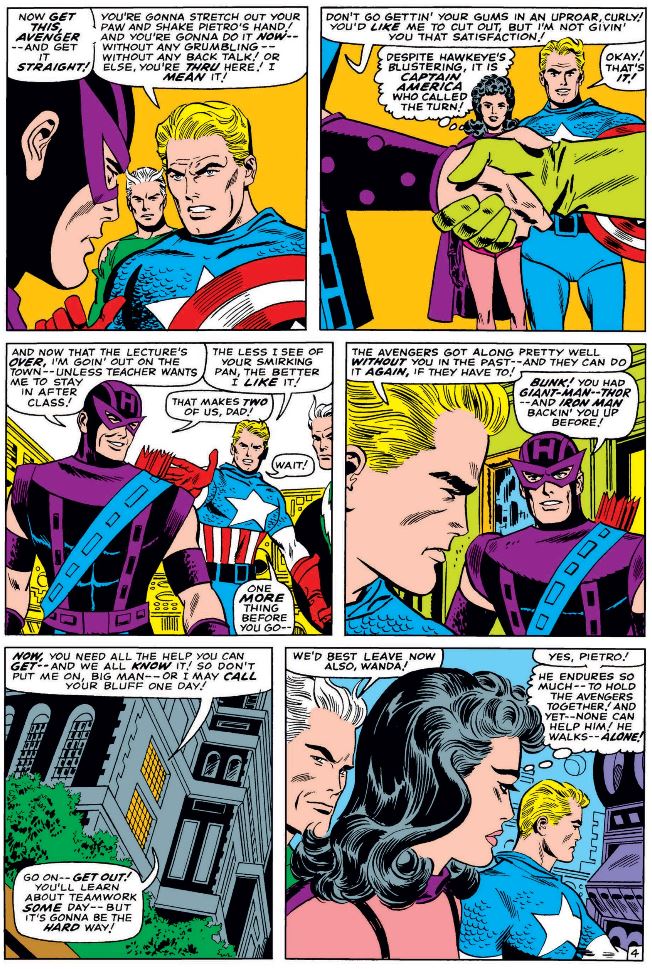 Wanda even sings Cap’s song for loneliness for him!

Most of the rest of the issue concerns Janet van Dyne, the Winsome Wasp, who is abducted by Attuma, an Atlantean conqueror, who observes her following Namor and suspects her of spying on him instead. She manages to escape and send a distress signal to the Avengers to warn them of Attuma’s war plans. Gradually they all make their way to Attuma’s undersea vessel—Hawkeye was being petulant and joined the rest later—and they did battle (as you do).

By issue #27, Cap and the Scarlet Witch have been captured, but Cap exploits every comics villain’s weakness… 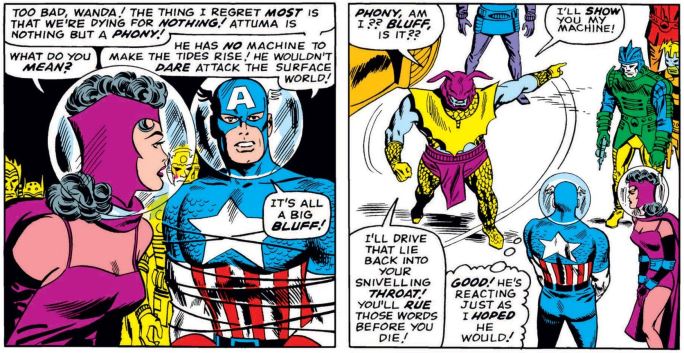 Below, Cap makes one of his best statements about courage, which I cite in The Virtues of Captain America (p.47). As he suggests, courage is not the absence of fear, but the ability to overcome it. (A verdant fighter pilot I know would agree.)

In the end, the Avengers escape from Attuma’s craft, which Cap sabotaged to explode, eliminating “the watery menace to mankind” (as he puts it).

At the end of the issue, the Avengers get a distress call regarding the Wasp, which in issue #28 we learn is from none other than Hank Pym—whom no one knows is actually the original Avenger know variously as Ant-Man, Giant Man, and more—saying the Wasp is missing (and in the process revealing his secret identity).

Clint gonna Clint… but not for much longer.

And what happened to the Wasp, anyway? You might recognize this handsome fella from his cinematic debut in the first Guardians of the Galaxy movie; this is his first comics appearance.

Like any good collector, he wants a complete set of Avengers. (Understandable.)

Meanwhile, Cap and the rest have learned a lesson from trusting wannabe-Avengers who turned out to be villains (like Wonder Man in Avengers #9 and a robotic Spider-Man in Avengers #11), so they take out their newfound paranoia on poor Doctor Pym.

That’s a bit harsh, Cap. You couldn’t simply ask him about how silly you all thought it was that Tony Stark could possibly be Iron Man? 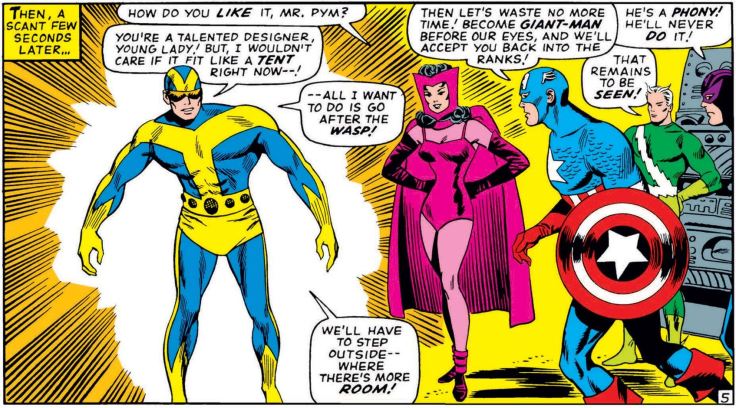 For a while, at least, Hank goes by Goliath—which will be soon be more apt than he could know, and also casts Cap’s insistence that he use his powers in an even harsher light. 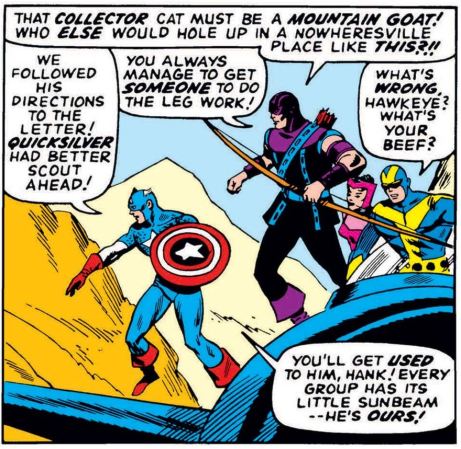 …and gets a new appreciation for how Cap has developed as a leader since Hank left the group, as we see in the two nonsequential panels below. 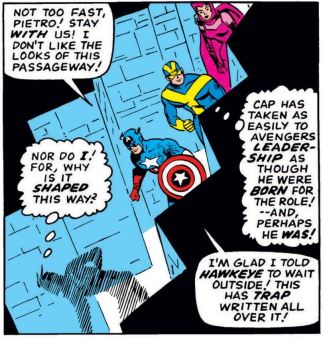 Once the Avengers + 1 find the Collector and the Wasp, and enter into combat with  Abner Jenkins, aka the Beetle, a foe of the Human Torch and the Thing, and later Spider-Man, who graduated to fighting the Avengers (and would later become a key member of the Thunderbolts). Reach for the sky, Abner!

In the scene below, I really like how Cap quietly acknowledges that his bravado is less than sincere, although necessary for inspiring the “troops.”

After the Collector escapes via time machine—take that, Kang—Wanda frees the Wasp from her tiny prison, and she reveals her identity to the other Avengers (as Hank was forced to earlier). Speaking of whom, when Hank tries to shrink to normal size, he discovers he was a goliath too long, and can only reduce his size to ten feet.

As we see in issue #29, he has some… issues with this, issues that Cap learns to manage in later issues, but does not do so well here.

Meanwhile, an old flame returns to Hawkeye’s life… none other than Natasha Romanova, the Black Widow, who has been brainwashed by a Chinese Communist into destroying the Avengers. To that nefarious end, she recruits the Swordsman and Power Man, last seen in Avengers #20 and Avengers #22 (respectively), and invites Clint join them, but never will he be evil again. (Just a jerk.)

Cap sends the Wasp to trail Hawkeye, but she has an unfortunate encounter with a bird on her way back to warn Cap about the villains, who manage to overtake the Avenger, humbling he who needs no humbling.

I would argue that philosophizing always helps—as you, dear reader, would surely agree!

After many glorious battles, the villains flee, and while Hawkeye draws his bow on Natasha, he finds he cannot fire—and to his surprise, Cap sympathizes.

This is where we start to see Hawkeye ease up on Cap, finally realizing he’s not the rigid, demanding taskmaster Clint wanted to imagine him as.

The next two issues, #30 and #31, feature almost no ethically interesting Cap content. Most notably for the Avengers, Wanda and Pietro take a leave of absence to return to Europe to find out why their powers are fading (as seen in the panel from issue #30 below), and are replaced by Hank and Janet, the former still broken up over his permanent Goliathness.

Also, Black Widow breaks her brainwashing and begins interacting with the Avengers more, eventually becoming a member in Avengers #111 (and later a movie star).