In this issue, Captain America meets Frank Castle, aka the Punisher, in one of Frank’s earliest appearances outside of Amazing Spider-Man, two years before he appeared in Daredevil and six years before he got his first title. Accordingly, we get our first look at the differences between the two men, which we will see from time to time as they run into each other (although less often than you might expect). Also, Steve Rogers gets his first professional art gig, which actually matters much more for future developments in the title. (Sorry, Frank.)

The issue opens with Cap intervening as a couple of mob enforcers try to get information out of a guy named Joey, after which the police show up and give Cap some much-appreciated validation, especially since his role as the Sentinel of Liberty was shaken anew in issue #237.

Say goodbye to Captain America and meet Steve Rogers, mild-mannered commercial artist for a large metropolitan publisher… or so he hopes.

Hmm, I suspect Non-Parallel Publications Inc. (NPP) is a clever stand-in for National Periodical Publications, Inc., the official name of DC Comics from 1961 to 1977.

Steve receives what may be his first professional critique… 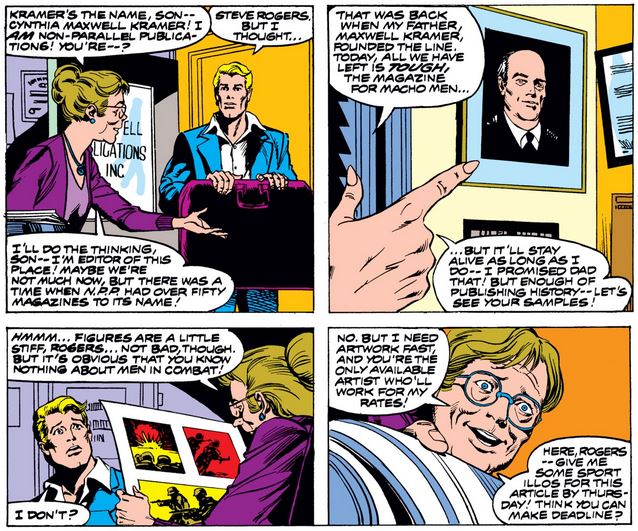 …although I like to think it says more about how Ms. Kramer is used to seeing combat portrayed than how Steve does it!

And he’s none too pleased with his first assignment.

He missed the reality about editors: They are super-villains! (I kid, I kid.)

After he gets home to his new apartment, he hears one of his neighbors, Holocaust survivor Anna Kapplebaum (whose story was told in issue #237), cry out, and he rushes to her side, reassuring her that he believes in her and what she saw.

At last, Steve gets to work on “Ilse–Love-Prisoner of Stalag 18,” when he hears… 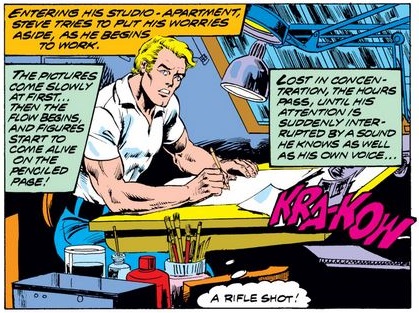 …only to find his mystery gunman and Joey, the fella he saved from the mob enforcers at the beginning of the issue. (And Cap’s acrobatics continue!)

Here we see a frequent theme in the interactions between Cap and the Punisher: Frank Castle, a former Marine who served in Vietnam, has a deeply rooted respect for Cap, which conflicts with his mission to eradicate crime (especially organized crime) using extreme methods (including one that Cap and a certain Dark Knight Detective would never endorse). 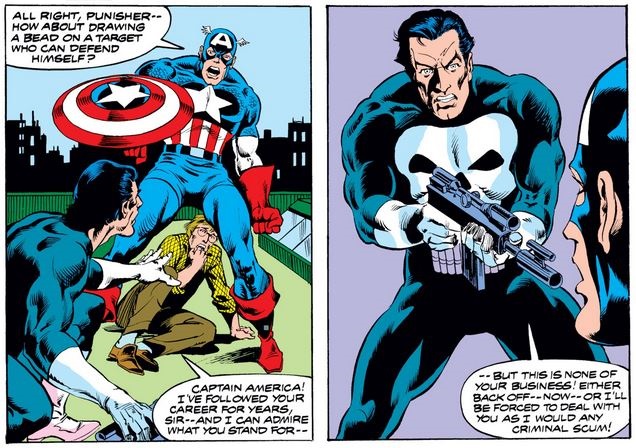 Fun fact: Frank keeps a “war journal” of his crime-fighting missions, and I assume he was an early adopter of the Bullet Journal. (Thank you, I’ll be here all week.)

Frank tries to explain to Cap that they’re both on the same side, sharing the same ends, but Cap hones in on the main difference: the means that each thinks those ends justify. 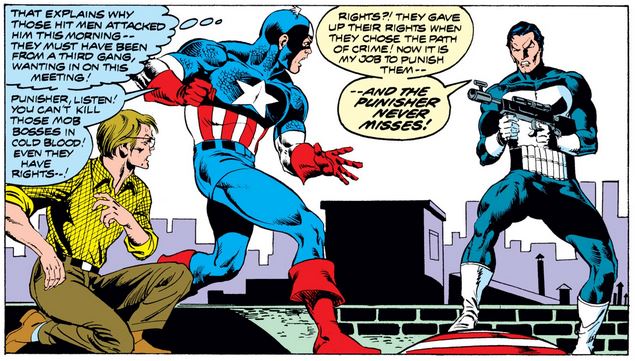 As we see above, one aspect of their difference approaches deals with the rights of criminals: Cap believes in the rights of every person to a trial and to be punished only if found guilty by a jury of their peers, while Frank believes criminals have no rights and he is free to mete out their punishment, implicitly assuming that he knows who is guilty and what punishment they deserve (and not being particularly concerned about being mistaken). Cap would prefer to trust those roles to the authorities, who (ideally) can investigate, apprehend, and prosecute criminal suspects dispassionately, letting the guilty go free on occasion but also lessening the chances of punishing the innocent (hence William Blackstone’s famous saying that it is better to let ten guilty persons go free than to punish one innocent one).

The Punisher is determined to take out Joey, enough to threaten Cap’s life to do so, unless he’s bluffing—as Cap is when he offers Frank a deal (despite his distaste for dishonesty and subterfuge).

We don’t find out what Cap’s “deal” involved because Joey decides he can outrun a bullet… which he can’t.

Cap finds out where Frank is going and heads there, leaving Joey in the care of some guy who showed up on the roof (in overalls, so he’s trustworthy or something, I guess). On the way, he reflects on the Man in Black (no, not this one, nor this one). 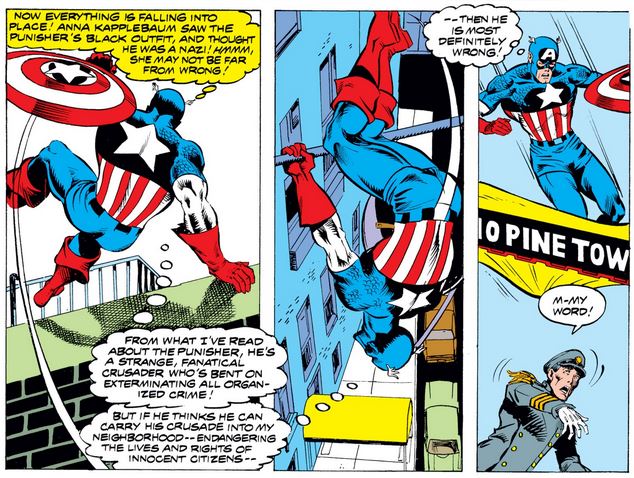 At the risk of reading his thoughts too literally, Cap seems more concerned here with keeping Frank out of Brooklyn and protecting its innocent residents than preventing him from murdering people in general, which is more consistent with Batman’s stated mission of protecting the (innocent) people of Gotham City than Cap’s normal emphasis on protecting the American people and dream. (Maybe I am taking him too literally, but it’s still a surprising thought on his part, perhaps motivated by finally having a home base of his own.)

Cap arrives such as Frank is about to detonate explosives attached to a water tower in which two prominent mob bosses are meeting. They renew their debate: Cap reiterates his point about rights, particularly that they can’t be granted selectively if they are to apply universally, and then borrows a page from Batman’s script, arguing that Frank can’t adopt the methods of the very people he fights without becoming one of them. (I think that ship has sailed.) 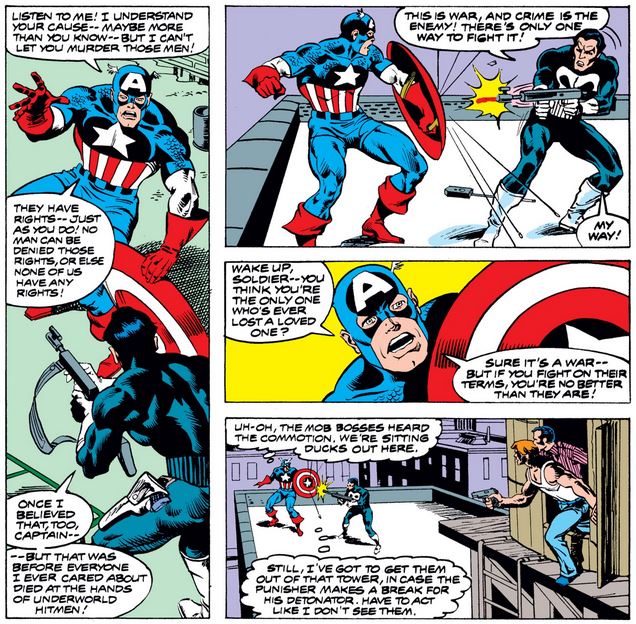 Note his thoughts in the last panel above, reflecting concern not just for him and Frank—while Frank is firing at him—but also the criminals inside the water tower. (Cap is nothing if not sincere.) Below, he performs an unbelievable balancing act: He stalls Frank until the criminals leave the water tower and then saves Frank from them, only to watch Frank take out the criminals one by one.

(Very nice of the criminals to fire into Cap’s shield instead of the exposed man next to him.)

From the look on his face above, we can surmise that Cap is unhappy with how the situation is unfolding, which he confirms below to Frank before he backs up his words with action—action that earns Frank’s admiration as well as a more mysterious sentiment, perhaps gratitude or esprit de corps.

It turns out one of the criminals… umm, isn’t… and she has no problem expressing her gratitude.

While Cap points out the obvious, he also notices Frank discard the detonator, and anticipates the result just in time to save more lives…

…but not in time to prevent Frank’s escape. (But I’m sure we’ll see him again… a lot.)

After the police show up, Cap comes to a realization similar to one he had after he defeated his psychotic 1950s doppelgänger, one that we’ll often see when he encounters the Punisher: that he and Frank are as similar as they are different, and “there but for the grace of God go I.” 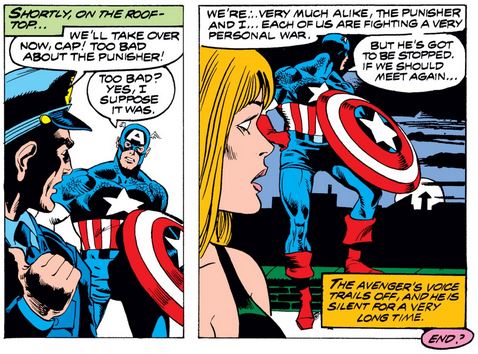 By the way, I am aware that I mentioned the Dark Knight more than usual in this post, and if you’re interested in any of the points I made here about the him, they are discussed further in my book Batman and Ethics.

Collected in color in Punisher: Back to the War Omnibus and in black-and-white in Essential Captain America Volume 7 and Essential Punisher Volume 1.