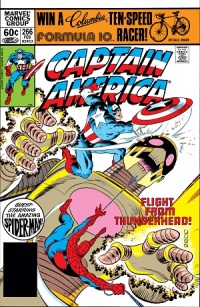 This issue wraps the team-up between Captain America, Spider-Man, and Nick Fury begun in the last issue, in which Cap continues to be overly dramatic, using some lines best saved for the Red Skull on Sultan, a would-be world destroyer-slash-dictator.

Naturally, this issue begins with the cliffhanger left over from the last, in which Nick has pulled a Bucky, and Cap and Spidey have taken a big step off of the flying mountain headquarters of our villain-of-the-month. 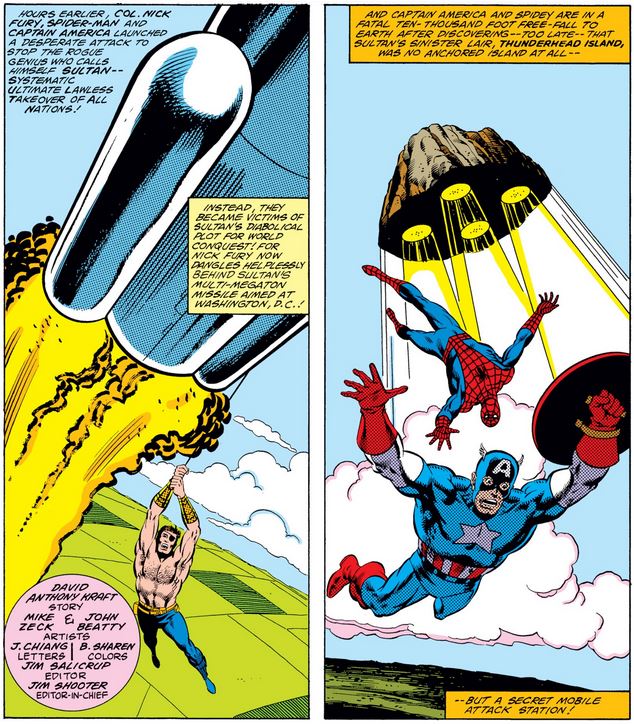 After Spidey catches the mountain with one web, he tries to shoot another down to Cap, who has faith in his young friend, until said friend gets knocked out… 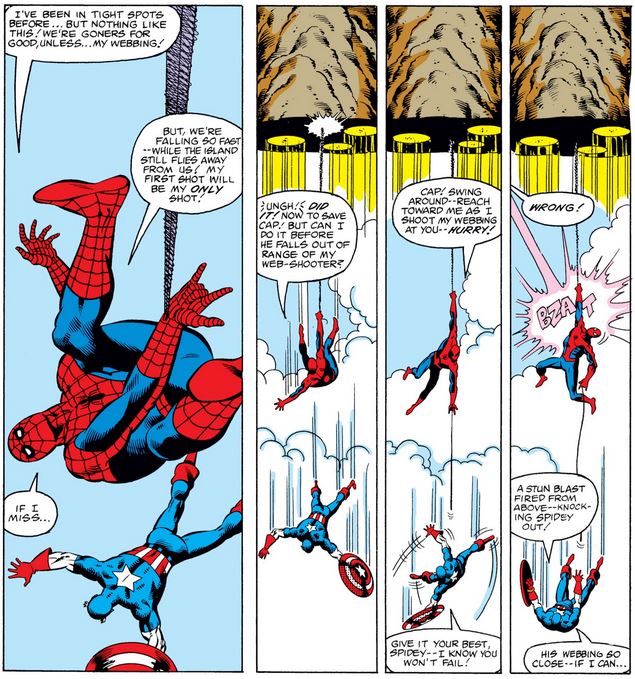 Sultan’s biotron constructs refuse to let gravity do its job, and Cap uses their sudden appearance to his advantage, demonstrating some clever acrobatics and mid-air shieldwork… 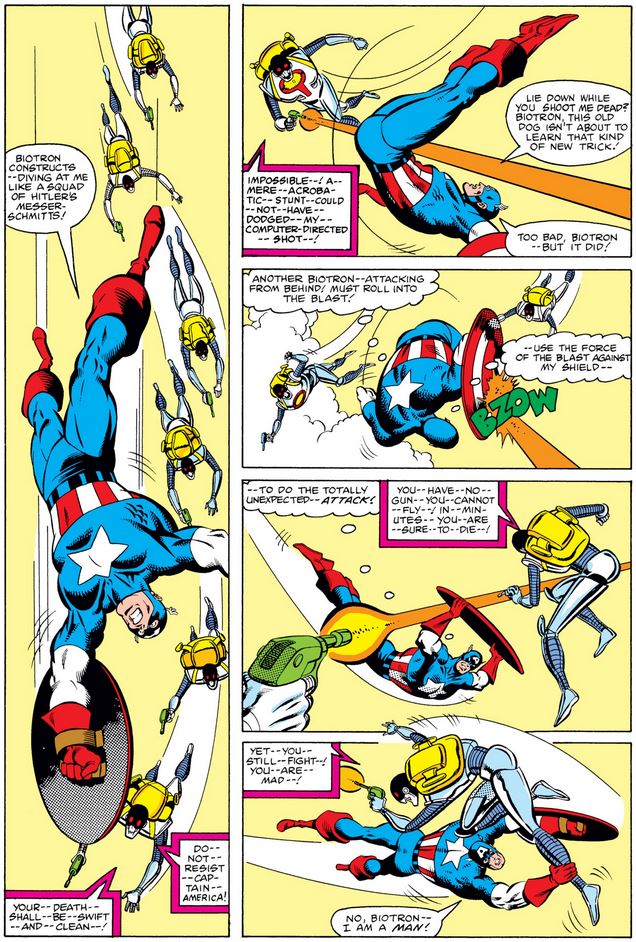 …before sharing some personal experience with them.

…proclaiming this, coupled with ambition and drive, to settle humankind’s superiority over machines. 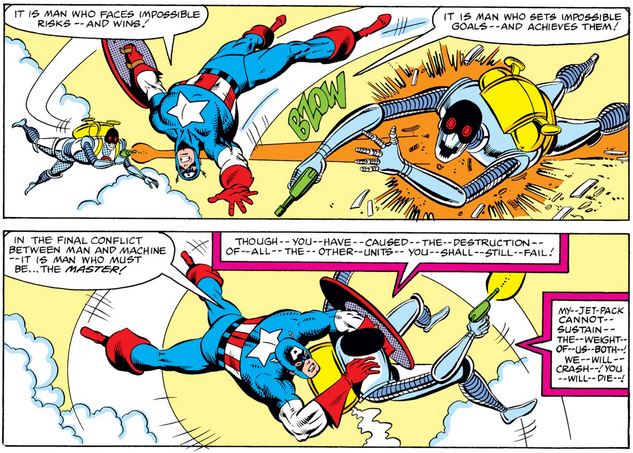 And in defeating the last biotron construct, Cap also wins the battle against gravity, but wastes the culmination of his grand speech on no one. (Or does he know we’re reading?) 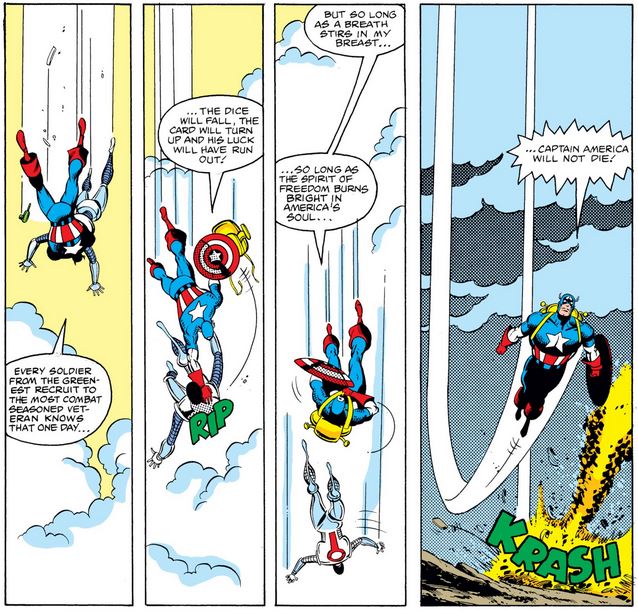 However, it looks like he has a little left for Sultan, whom he puts in a class just a little above (or below) his weight. 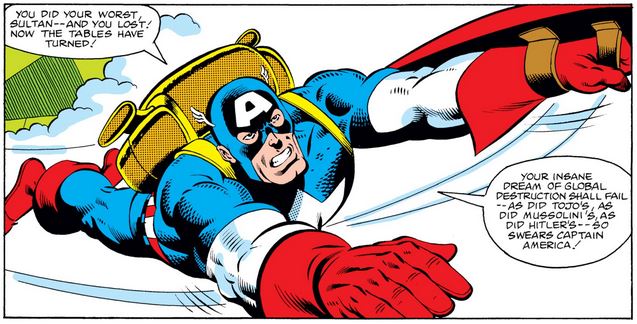 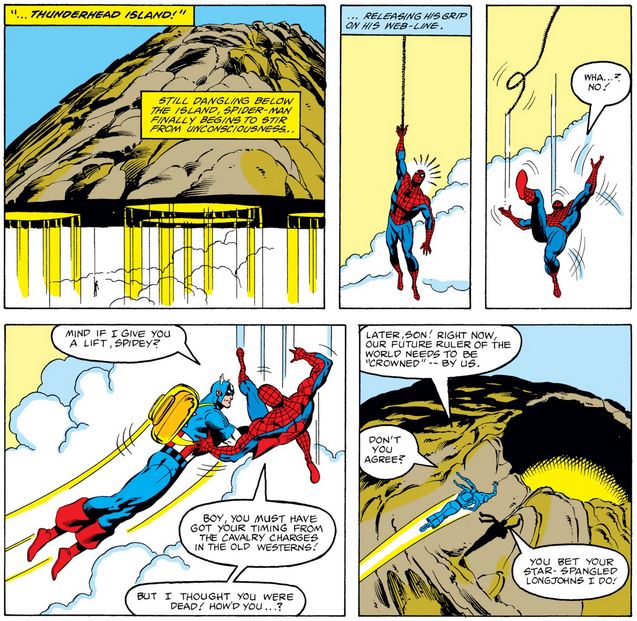 After Cap and Spidey return to the mountain, the battle is joined once again—a battle of words as much as fists, with Cap refuting Sultan’s plans to defeat the American spirit by destroying its capitol. 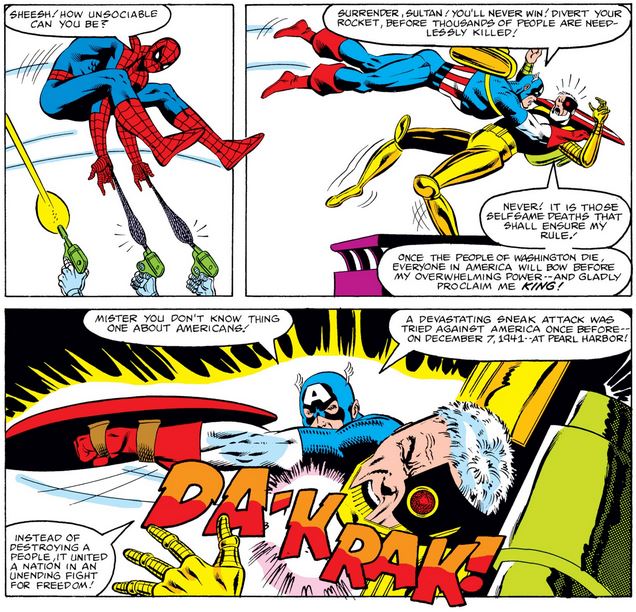 For some reason, the would-be king loses his bravado once Cap lifts him up… 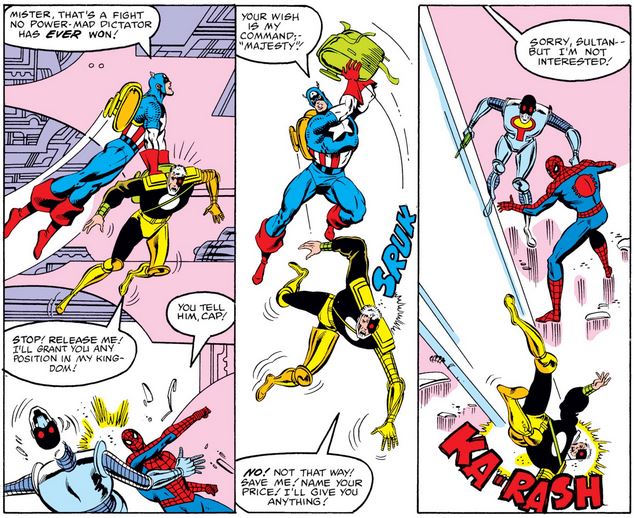 …and dies when he hits the ground, much to Cap’s surprise, though he doesn’t seem upset about it, instead using the occasion to make a comment about charismatic leaders and their followers (although these followers are literally robots). 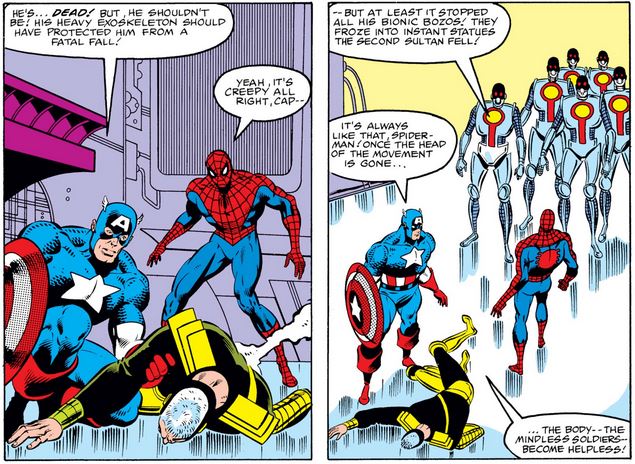 When Cap and Spidey feel the mountain shake, they fear the worst and flee. They soon learn, however, that not only were they wrong about the mountain—you never know what a mountain’s going to do!—they were also wrong about the capacity of Cap’s jetpack, which is quickly running out of fuel. On the bright side, this gives Cap a chance to give Spidey a skydiving lesson. 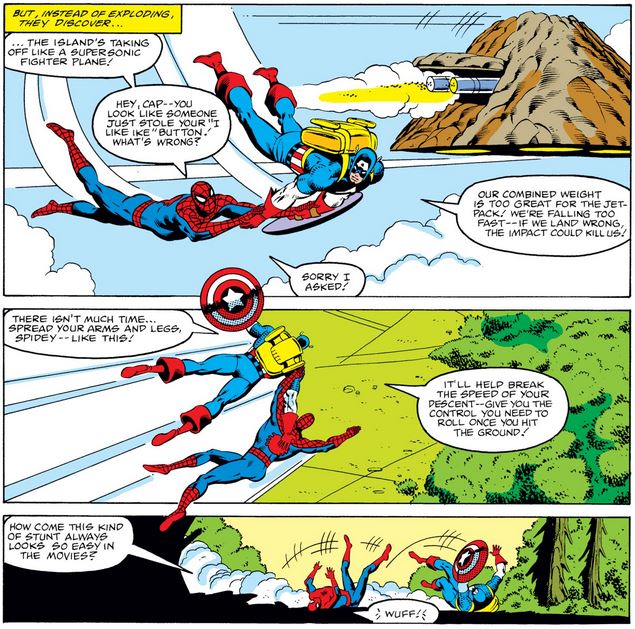 Spidey gets a chance to return the favor when he senses danger… in the form of Sultan, who borrows a trick from Machinesmith’s playbook. 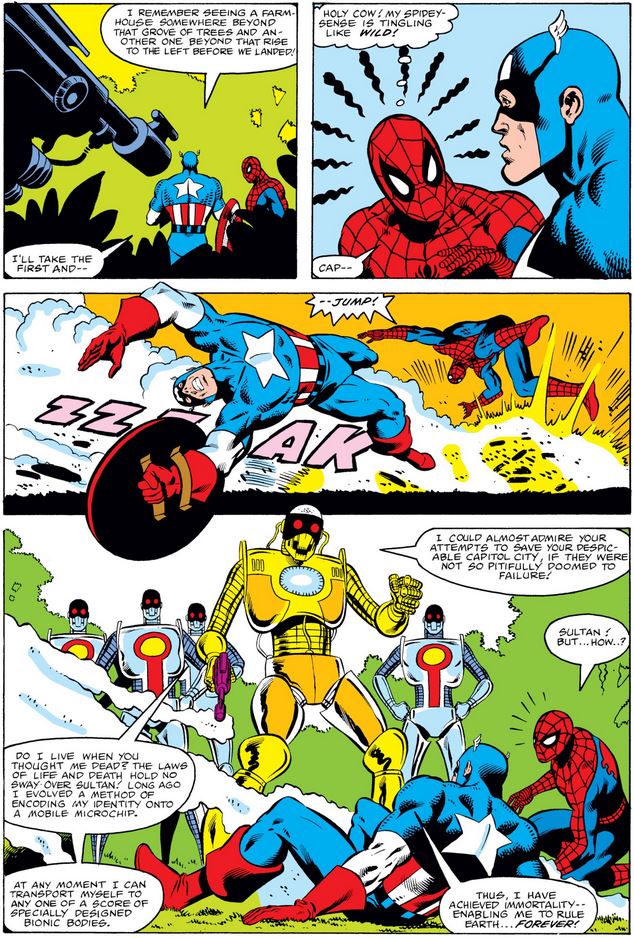 After they fight a little more, Sultan points out a flash in the sky, the implications of which threaten to push Cap over the edge… 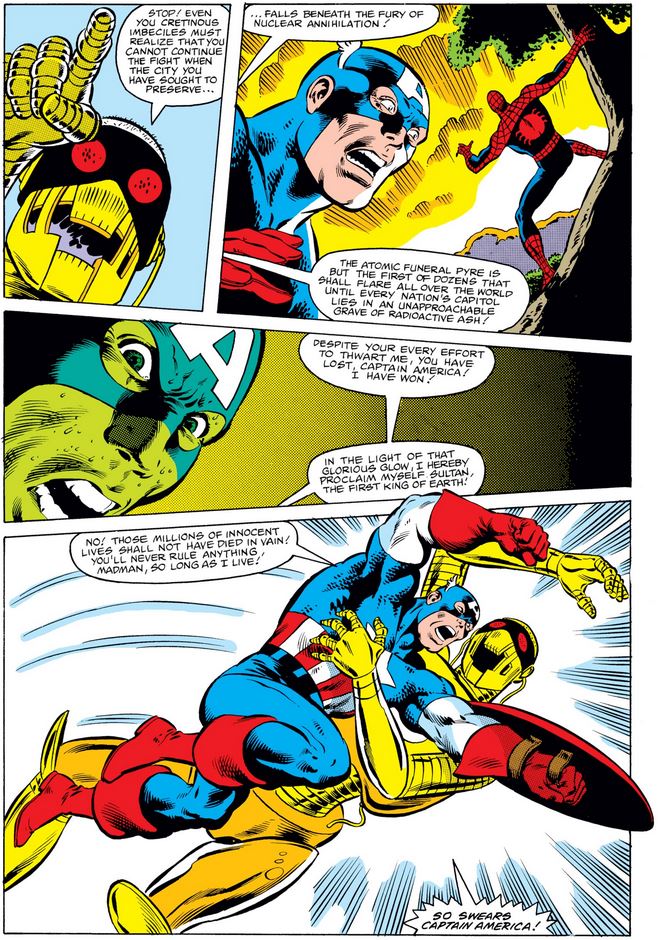 After some more fighting, Cap finally realizes how to counter Sultan’s sonic blasts, destroying that body… 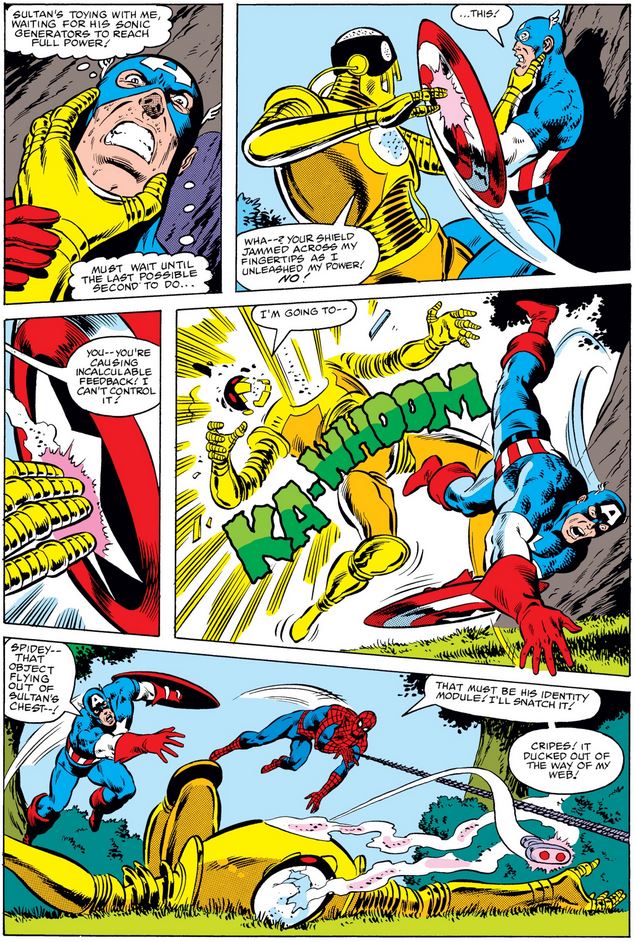 …but letting his thumb drive free to fly into another. Or not. 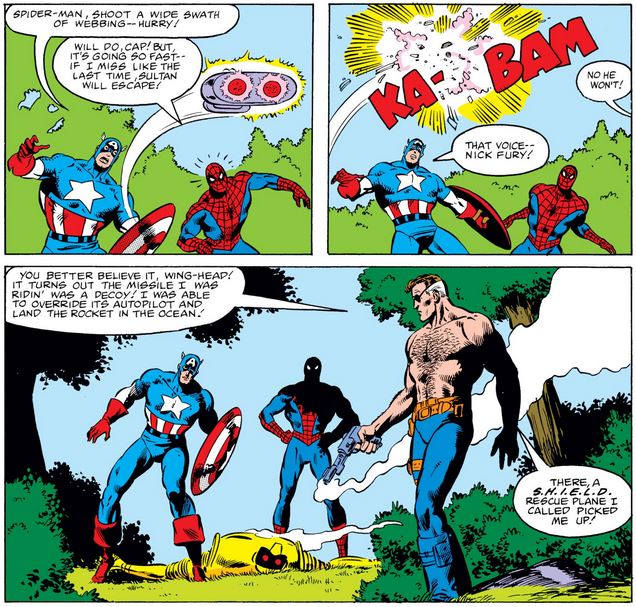 And what about Washington, DC? 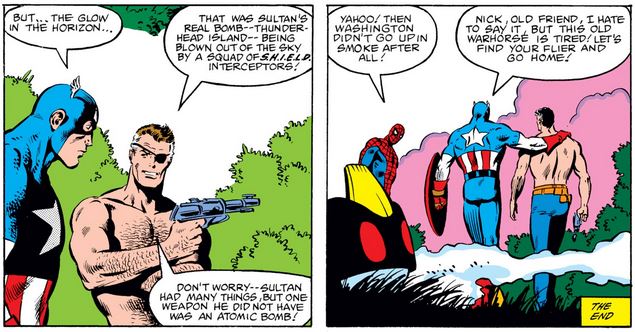