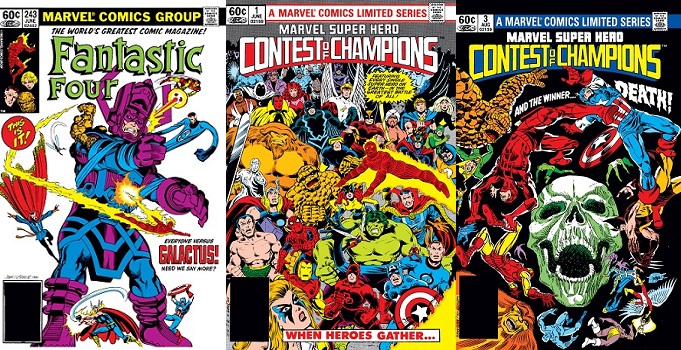 These four issues feature Captain America and his fellow Avengers alongside the Fantastic Four, plus (supposedly) every other Marvel hero at the time in Marvel Super Hero Contest of Champions, the company’s very first miniseries (or “limited series” as they were called then).

In Fantastic Four #243, the Avengers find themselves in a mansion with no power, and Cap doesn’t have time your jokes, Janet!

(Can I just take a moment and say how nice it is to see John Byrne drawing Cap again?)

As they will soon learn, Terrax, herald of Galactus, separated the island Manhattan from Earth and is holding it hostage to compel the Fantastic Four to kill Galactus and free Terrax from his servitude. Terrax grows impatient and attacks Galactus himself, but the World-Eater makes quick work of his herald and then turns his attention to his next meal: the third planet from the sun. Reed tries to reason with him, but Galactus doubles down on his cold indifference until some of Reed’s friends show up. 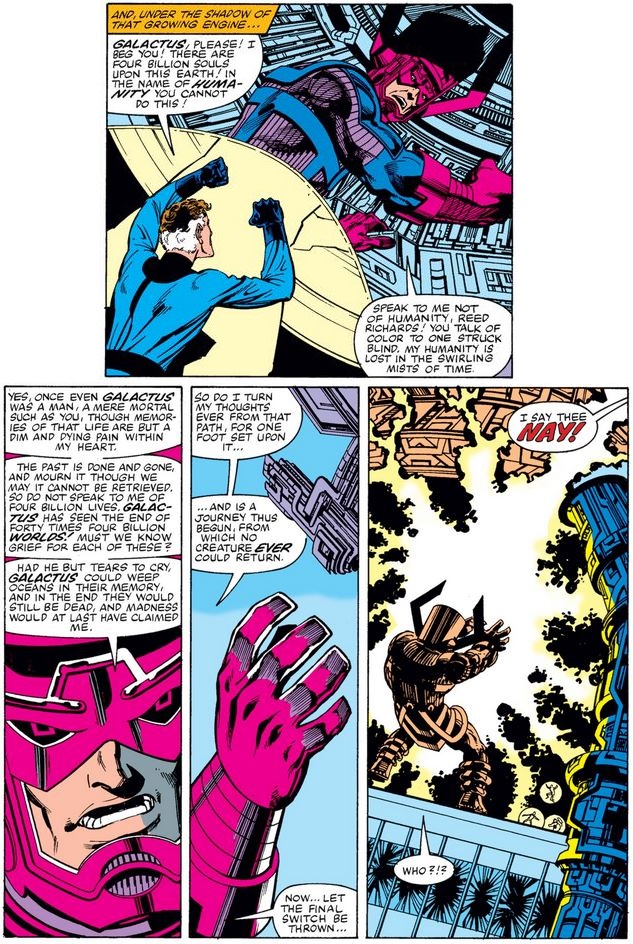 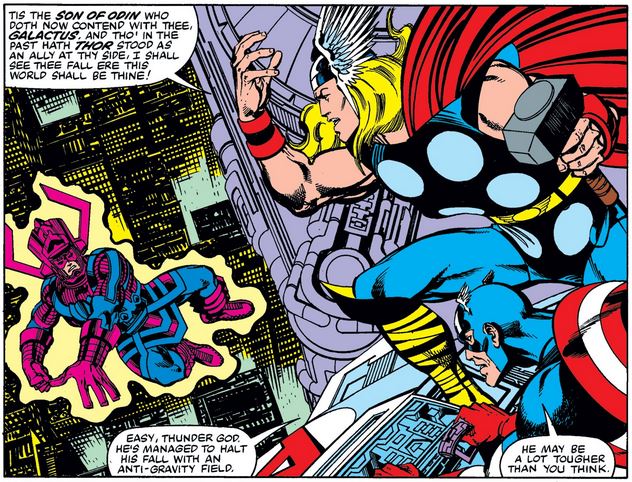 Nice Capsplaining, but the Odinson is more than familiar with Galactus, having faced off with him many times, starting with Thor #161 (February 1969).

The Avengers Prime attack, but Reed interrupts with some… common sense?

Leave it to the Wasp to drive Galactus to ground by flying into his helmet and breaking the concentration he needed to hover, after which the heroes manage to defeat him—with the help of Doctor Strange, who forces Galactus to confront the thought of all the lives he’d ended.

(This is where Galactus falls in love with a vampire slayer, right?)

Now that he’s down, the next question is… what to do with him? As we saw, Johnny is willing to let him die, but Cap and Reed have other thoughts.

In Fantastic Four #244, Iron Man draws on a recent Avengers story to make a case for letting the Devourer of Worlds perish, but Cap counters with an argument that Reed will build on later when he’s put on trial for saving Galactus and allowing the consequent murder of entire global populations (in Fantastic Four #262). 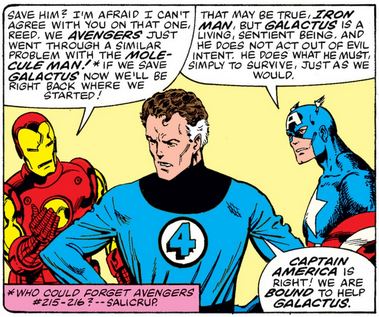 It’s only touched on briefly here (and much more when Reed testifies in his trial), but speaking as a Fantastic Four fan, I’ve always found the moral status of Galactus an interesting one. If he is truly sentient—which, in this context, I take to mean conscious, self-aware, and autonomous—then it would seem he is responsible for his actions, which cannot be chalked up to survival instinct alone, and he can be judged good or evil based on them. Galactus is either a rational person or an irrational beast, with the former usually commanding more respect than the latter; it’s difficult to see how he can be both. (I’m sure I’ll have more to say about this when I finally write my book on the Fantastic Four!)

Tony does agree to fetch some of advanced tech from “his employer” to help save Galactus, with a jumpstart from Thor that goes too far, requiring Cap’s help (along with a gentle dig at his pal’s handiwork).

In the end, Galactus is saved, but I’ll let you read the rest of the story for yourself—as with all of Byrne’s FF run, it’s well worth it!

The cast of characters grows much larger in Marvel Super Hero Contest of Champions #1, beginning with an outdated Avengers line-up (due to the story originally being prepared to commemorate the 1980 Olympic games in Moscow, which the United States ended up withdrawing from).

…as is every other hero in the Marvel Universe, resulting in a double-page spread that has been replicated in many a line-wide event book, including Marvel’s Secret Wars and DC’s Crisis on Infinite Earths.

(Hey Matt, what are you looking at?)

Below we see what may have been the first observed “meeting” of the Illuminati, the secret brain trust that first appeared officially in New Avengers #7 (July 2005) but were established to have operated behind the scenes since the end of the Kree-Skrull War (in Avengers #97).

Long story short: Similar to the Avengers/Defenders War, the heroes here were gathered by the Grandmaster and a mysterious hooded opponent to do battle for them and retrieve mystic objects. More important… look who gets picked first, albeit not for the best reason! 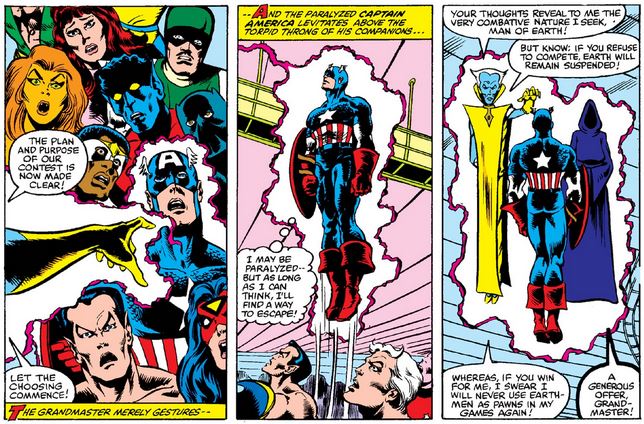 There are four separate battles over the the next two issues, and Cap is in the final battle, in issue #3. (If you don’t recognize Shamrock, Collective Man, or Blitzkreig, don’t worry—they’re three of six international heroes introduced in this series, mostly never to be seen again.)

Cap acquaints himself with his teammates, for all it’s worth. 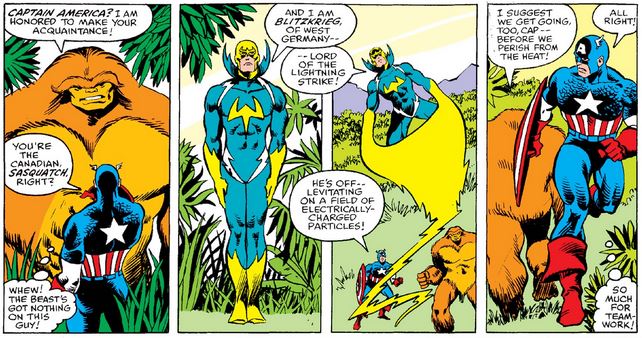 He ends up fighting Shamrock—and in case you couldn’t guess where she’s from, she’ll tell you. (Cap might have mentioned his own Irish heritage, had it been established yet. He does get a point for the classic film reference, though.)

She’s not just making a cultural reference: She does have luck powers… 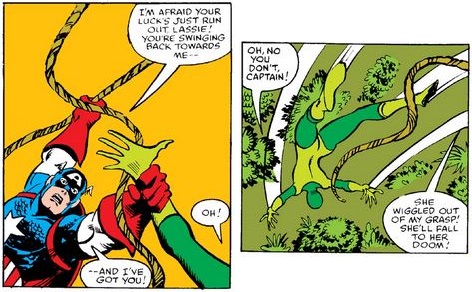 …which save her life and allow her to evade the… ahem… handsome hero chasing her.

Cap finds the mystical object they’re all after, but Shamrock gets there first.

Funny story: As the issues clearly show, the teams of the Grandmaster and his mysterious opponent each won two matches, but as you can see above, the Grandmaster was declared the winner, 3-1. (Counting is hard!)

Collected in: Avengers: The Contest.