This post is somewhat of a grab-bag, centered on Avengers Annual #11, written by then-regular Captain America and Defenders writer J.M. DeMatteis, followed by a few panels from assorted other Cap appearances that month, including two other annuals. (The Amazing Spider-Man Annual #16 from the same month—which introduced Monica Rambeau, the new Captain Marvel—is covered in the post on Avengers #224-227, because it leads directly into issue #227.)

Avengers Annual #11 opens with the mysterious arrival on Earth of Nebulon, a god-like being who fought the Defenders several times and was sentenced by the authorities of his world to exile on Earth. (Thanks a lot.) When he befriends Thor, Nebulon pleads his repentance and desire to start a new life, and Thor invites him to meet the rest of the Avengers—one of whom is the subject of effusive praise in the narration below, highlighting his renown, his dedication to his mission, and “natural” abilities.

Why he works out in full costume, including cowl and boots, I’ll never know… perhaps to simulate battle conditions?

While he’s critical of his performance, the Wasp is more flirty… 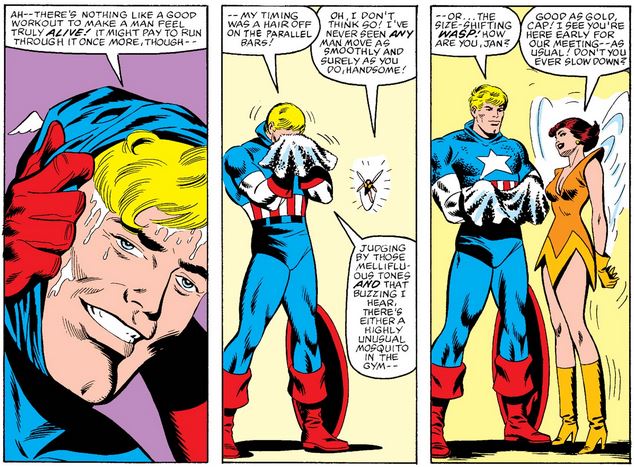 …and even though he misses the obvious Tinker Bell joke, we see that he is working out his tight five.

Based on the dialogue and thoughts above, this story apparently takes place before Avengers #224… you’ll see why in that post.

As promised, Thor brings his new pal to the clubhouse. Tony’s already familiar with his rap sheet, but Cap doesn’t seem too alarmed.

Thor pleads his new friend’s case, and Janet and Cap are instantly sympathetic, each for her or his own reason: Janet’s reaction reflects her recent break-up with Hank Pym, and Cap’s is based on his own experience as a “man out of time” and his gratitude to the Avengers for helping him adjust to his new world.

Even Iron Man relents, just before a new quartet of heroes arrives to cast a dissenting vote.

The Defenders claim that Nebulon has mesmerized the Avengers and has plans for the Earth, which are evenly split between destruction and conquest. They fight—of course they fight—and Nebulon claims that it is the Defenders who have been bamboozled, specifically by Supernalia, a female member of Nebulon’s race. In this spirit, Cap urges the Defenders to resist her control… 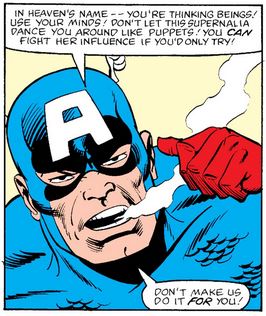 …aaaaand they keeping fighting, which tells you how well that went over. This time they pair off, with Cap mixing it up with his former Avengers teammate, the Beast.

They both become distracted when they hear the Wasp (who is fighting the Gargoyle), but not for long. 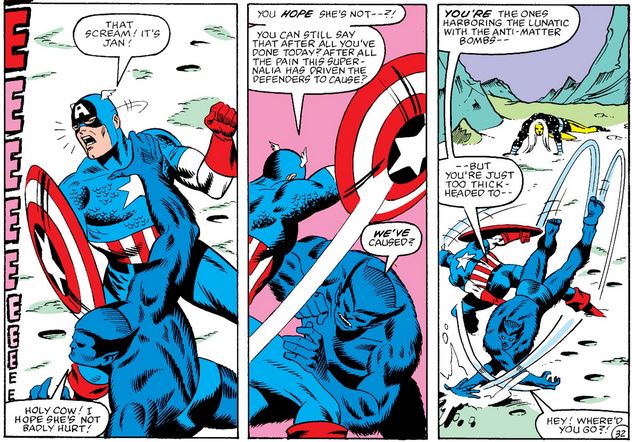 It’s not often we see someone catch the shield (until Captain America: Winter Soldier, at least), much less use it like a toboggan.

Similar to how he gets through to the adult Bucky the first time they fight (in both the comics and the movie), Cap lets Beast wallop him until he comes to, trusting that his friend remains in control.

Not so quick, Nebulon… someone’s here! Not only do we learn that both of them were manipulating our heroes (albeit in different ways), but also that they kinda know each other. 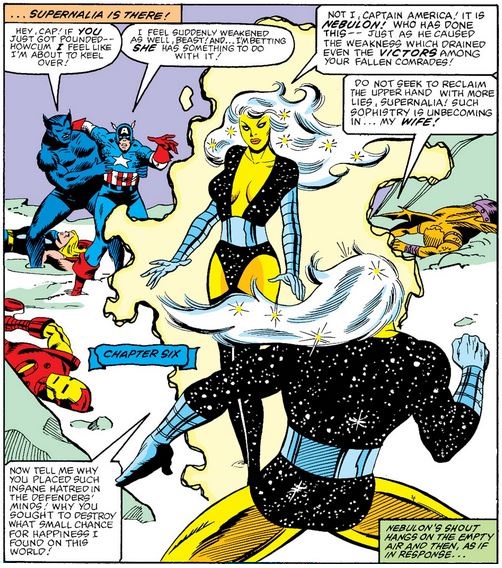 People may joke that their partners want to kill them, but this is no joke: She does want to kill him. Specifically, this would be an honor killing, based on the negative sense of honor (as discussed in chapter 4 of my book), which Nebulon rejects. 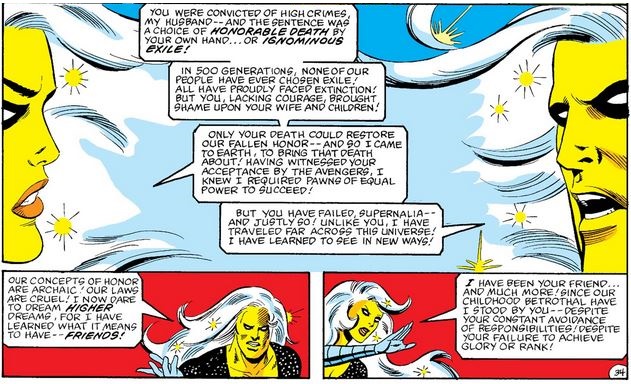 Supernalia then reveals Nebulon’s true plans for Earth, by the way of an “ennui device” that starts drawing the life force out of our heroes (and presumably makes them want to read French philosophy). As the collected heroes nonetheless turn the fight to Nebulon, the Beast asks Supernalia for help, but she refuses to interfere… until Beast points out that she already has, which negatively affects her own sense of honor in a very strong way.

No stranger to existential despair, Cap manages to redirect the ray to Nebulon himself, with much stronger effect. 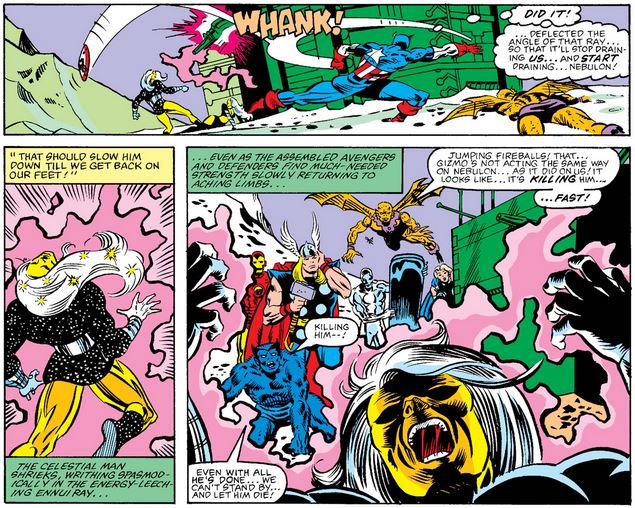 The Beast tries to block the ray and save Nebulon, but Supernalia stops him—which sounds like BUTT, no less—in the hope of restoring both her and her husband’s honor through death.

In case that wasn’t clear…

In the final two panels, Cap makes clear that Supernalia and Nebulon’s people are hardly the only ones who value a perverted sense of honor, based on pride and shame rather than integrity or justice, over life itself.

Bonus for the governance nerds out there: The final two pages of this issue contain the Avengers Charter, beginning with four short articles (comprising a very long oath) followed by a detailed list of by-laws.

Note the first two articles, which are of particular interest to the occasional controversies over the countries in which the Avengers are authorized to intervene, as well as which government bodies recognize them (without implying any particular chains of authority or oversight—more on that later).

In the by-laws, under Section One: Policy & Operations, we find a clause that could be important come the days of, say, a civil war:

Here is the entirely of Section Four, acknowledging in no uncertain terms that the Avengers do not actually “avenge” crimes, leaving that function of criminal justice to the proper authorities (while offering their assistance when warranted).

Lastly, Section Six clarifies the role of the US National Security Council in overseeing the Avengers (as we’ve seen in the various misadventures of one Henry Peter Gyrich).

We wrap up this post with three very minor appearances from this month. First, in Incredible Hulk Annual #11, the Avengers help most of the other Marvel heroes deal with an outbreak of a “green flu” (in a story that hits a little too close to home right now), actually a plan by the Hulk’s foe the Leader to create a new society (led by him, naturally). Below we see Cap reassure the New York City mayor (Ed Koch) that the Avengers are on the case.

After Hank Pym succumbs to the infection himself, the rest of the Avengers prepare to find the Hulk. Cap takes charge, even acknowledged by the exposition as their leader—this fact, along with Hank’s presence, suggests that this story takes place before Hank’s departure from the team in Avengers #214 (December 1981), much less Janet’s becoming team leader in Avengers #217 (March 1982)

The team, inspired by Cap’s words, follows the Hulk into a deep chasm. 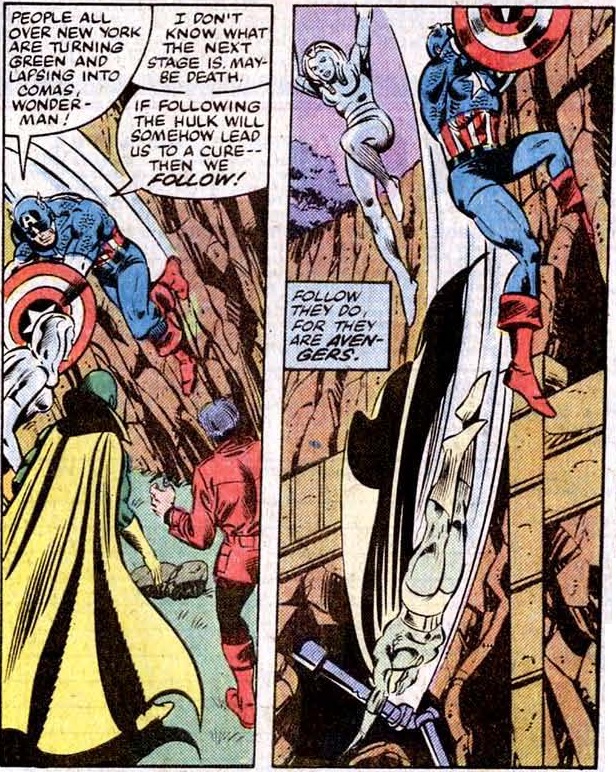 By the end of the story, Cap realizes they all owe the Hulk their lives, and reminds everyone that, despite all his rage, the Hulk is still a hero (sometimes, at least). 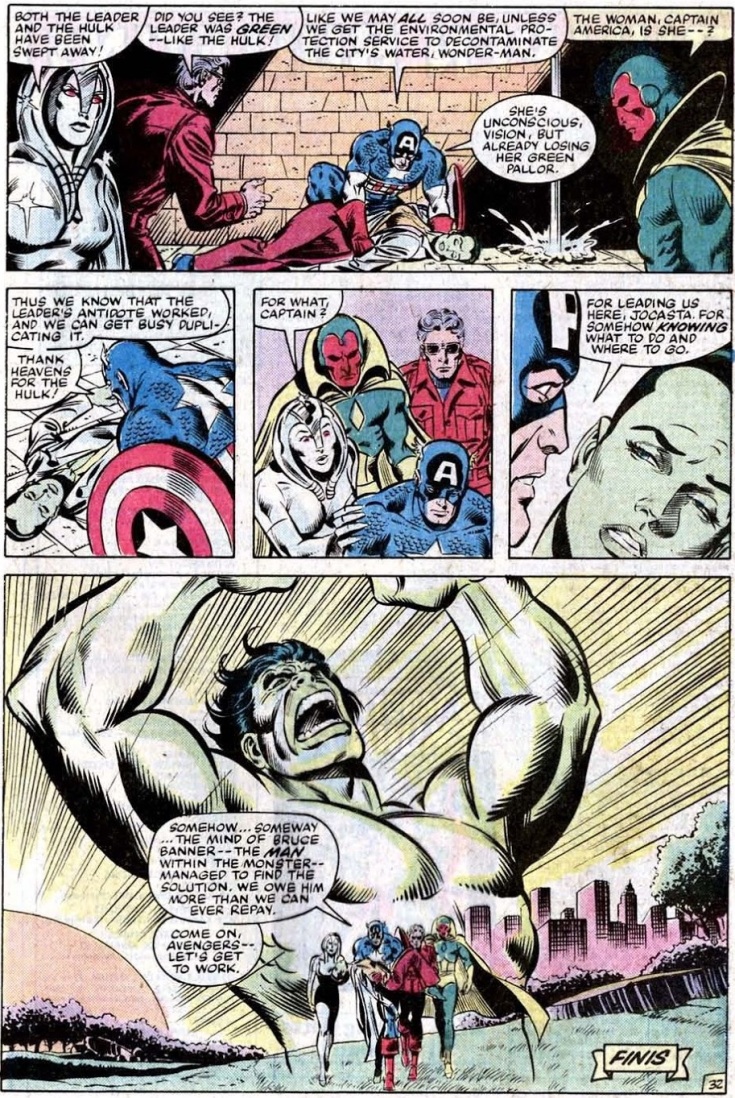 Finally, we have two panels from the Thing’s team-up title: In Marvel Two-in-One #92 (guest-starring Jocasta), we see Cap answer Reed Richards’ call with a humblebrag of epic proportions, before telling Jarvis that it will take forever to give Reed the information he needs. 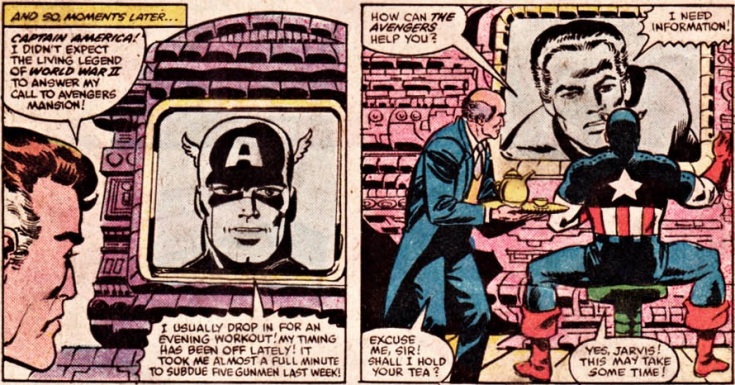 And in Marvel Two-in-One Annual #7, guest-starring a number of heroes vying with the Thing in a contrived battle against “the Champion,” the Avengers and the Fantastic Four prepare for the fight, and Cap cautions Hawkeye against overconfidence, suggesting much greater implications for the battle. 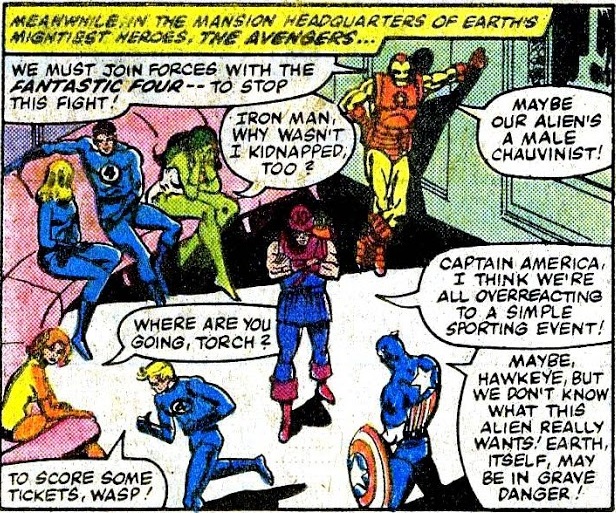 Johnny, on the other hand, has no concerns whatsoever. You go, Johnny!

Both collected in black-and-white in Essential Marvel Two-in-One Volume 4.