This post covers, in very little detail, the Avengers’ underseas adventure with Namor in Avengers and Alpha Flight, as well as Captain America’s two minor appearances alongside the team in the final issues of Eternals and Power Man and Iron Fist. (Not a good sign to have the Avengers guest-star in your book, I guess—watch out, Alpha Flight!)

In Avengers #271, a new Masters of Evil is assembling—which actually began in the last issue when they helped Moonstone escape custody after the Avengers captured her during the protests against Namor joining the team. As the Wasp is dealing with a couple of them, she sends out an emergency signal that the Black Knight forwards to all, bikers included.

A few hours turn into several days, apparently, because the panel below is the next time we see Cap: the very last page of the issue, getting a non-update from the Black Knight, who seems more concerned with the Wasp’s new beau, Paladin, than with the Masters of Evil. But both concerns will have to wait when Namor, who was alerted at the end of the last issue to the abduction of his otherworldly love Marrina by his enemy and political rival Attuma, calls for help.

In Avengers #272, we see the team heading to Atlantis in their submarine, and Cap urges Hercules not to count his chickens—remind me, was that one of his labors?—before Namor briefs him on the situation.

Namor is understandably frustrated and hurt that he has been rejected by his people and was forced to ask for help, but Cap lends his old friend a supportive hand. (A small gesture, perhaps, but between them I’m certain it means a lot.)

When the Avengers first encounter Atlantean soldiers, Namor acts like the ruler he is, and the Wasp makes clear the team has his back, but as Cap notes, the other side is not impressed.

As they join in battle, Cap gets a humblebrag in…

…before they notice another group in the distance, and this time they are allies, also trying to free Marrina (a former member of their team) at the request of Namor’s cousin and emissary, Byrrah.

The last part was shown in Alpha Flight #39, where we also get another view of the meeting of the two teams.

I’ll bet Namor likes that way of referring to them!

…but Cap’s greeting has to be corrected, unfortunately. (Note the contrasting opinions of two of the Alphans towards the Sentinel of Liberty.)

Back in Avengers #272 (as well as Alpha Flight #39), Namor explains that he only wants to rescue Marrina, and has no aspirations to reclaim his throne (with Cap’s corroboration), all of which calms the concerns of several of the collected heroes about starting an underwater war.

As the collected heroes engage once more with the Atlanteans, Hercules rails once again against the Wasp’s leadership while Cap cheers on his team. 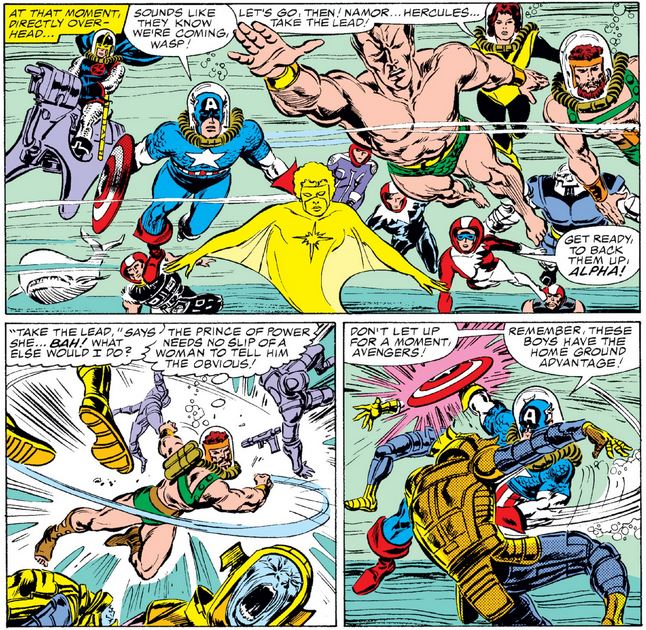 In Alpha Flight #39, Cap draws an obvious comparison between Attuma’s nationalistic calls back to a mythical “golden age” and similar protestations made by another infamous fascist leader.

After the Alpha Flight member Northstar frees Marrina, the battle comes to a head, and now even Cap is worried about escalation, leading to a conflict between responsible diplomacy and duty to rescue a hostage… and duty wins the day (this time, at least).

In the end, of course, the heroes win, and Namor gives Attuma a lecture that would make Cap proud…

…before he finally has a chance to talk to Marrina, who rejects him and flees. When Captain Marvel offers the team’s help, and even evokes the name of one of his oldest friends, Namor refuses, rather poetically.

When Monica reminds him of the civil suit facing him in New York, Namor expresses regret that he cannot settle that matter, but deems it more important to help Marrina. He tells his fellow Avengers that he’s leaving the team, and leaves her with a profound statement about duty and honor that shows how much he and Captain America have in common… and how much Captain Marvel misjudged him when he first joined the team.

Also these months: In Eternals #12, Cap serves honorably as the official switchboard operator between the two Avengers teams (who have their own team-up in their respective annuals next month, unrelated to the Eternals). 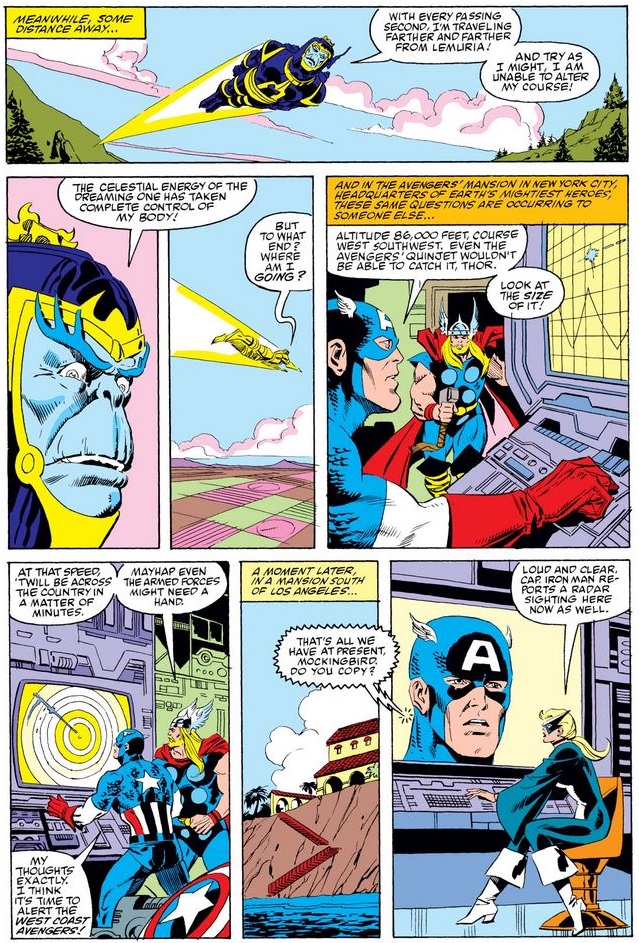 Finally, in the series finale of Power Man and Iron Fist, the Avengers work with founding member Hank Pym and Reed Richards to save a young boy named Bobby Wright who had grown close to Iron Fist. When Cap mentions the similarity to his experience with Rick Jones, it gives the others an invaluable idea. Reed has reservations, but Cap reminds him what’s at stake

When Cap and Reed see Iron Fist using his qi to keep the boy alive while Hank works on a solution, Reed mentions his discomfort with mysticism… at least the “unorthodox” kind… but Cap is only concerned that the boy lives.

When it becomes clear that Iron Fist is putting his own life in jeopardy to save the boy, Luke is obviously pained, more so because of an earlier argument between them, but Cap and Falcon remind him of the enduring power of friendship… 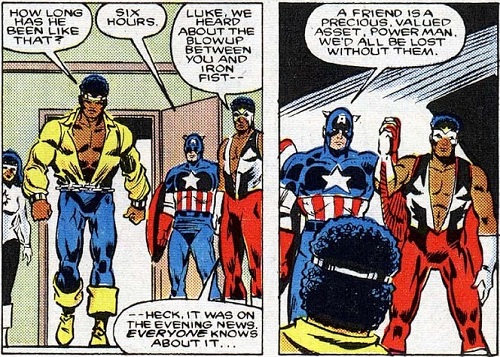 …which is re-enforced by Janet and even Reed, who is thinking about Ben and the fateful trip that transformed him forever (as seen in this obscure comic).

Cap plays clean-up, reminding Luke that everybody’s working for that young boy and they all have their role to play… if even that role is simply being there for your friend. 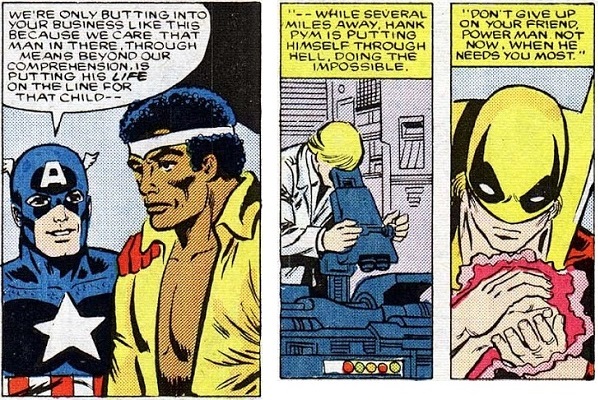 When Hank emerges with his own custom nega-bands—which I’m sure he’ll call Pym-bands, because of course he will—the Avengers run in the hall. (Nobody’s perfect.)

In the end, the boy lives, and the heroes share a touching hug.

By the end of the issue, both the boy and Danny Rand do die, but the boy was actually the Super-Skrull (who got better), and Danny was actually a plant creature from K’un-Lun who took Danny’s place earlier in the run. (Comics!)

All collected in: Avengers Epic Collection: Under Siege

Not collected (at least until Power Man and Iron First Epic Collection Volume Four is published).