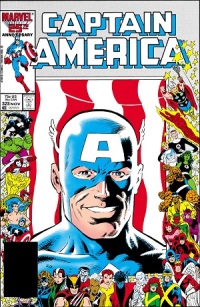 This issue of Captain America introduces John Walker and Lemar Hoskins, albeit in a way that will be unrecognizable to readers familiar with them only from The Falcon and the Winter Soldier. (However, John’s career will follow the same broad trajectory, and Lemar fares much better than he does in the show!) Storywise, this issue makes a strong statement about the brand of patriotism that is performative and opportunistic rather than sincere and principled, which is obviously an important distinction to Captain America. Also, we get an almost wordless back-up story from Marvel Fanfare that shows how Cap inspires kids to be better, whatever that may mean to any specific kid—or grown-up!

Below is the opening splash, and please note that the title is actual fireworks over the Statue of Liberty, announcing the arrival of Walker under his “codename” at the time.

His thoughts give us an early sign about his motivation and goals (as if his name in sparkly lights over Lady Liberty weren’t enough).

As Walker dives into the water, impressing the guards watching below, the camera turns to Cap, who has never thought to compare himself to the Statue of Liberty, although others do… probably not his new pursuers, though. 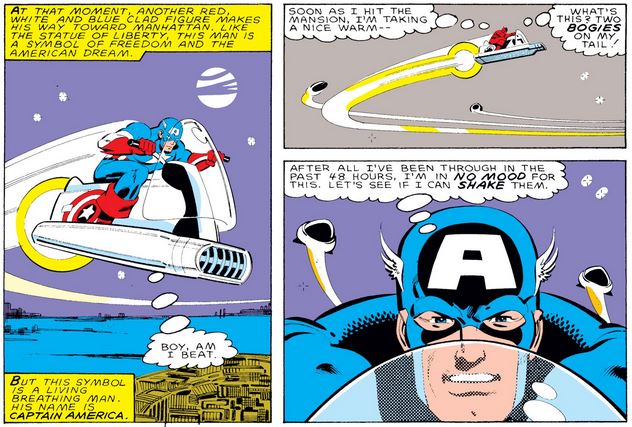 Cap finds his forward progress impeded, and while he ponders who’s after him…

…he decides to take a closer look, anticipating one of my favorite modern Cap pages, in which he surfs a jet while escaping from the SHIELD helicarrier.

Funny I should mention SHIELD: It turns out they want to talk to him about the incident in Switzerland when he killed an ULTIMATUM agent (from issue #321). If they’d told him that sooner, he wouldn’t have had to fight one of the pilots inside the tiny jet. 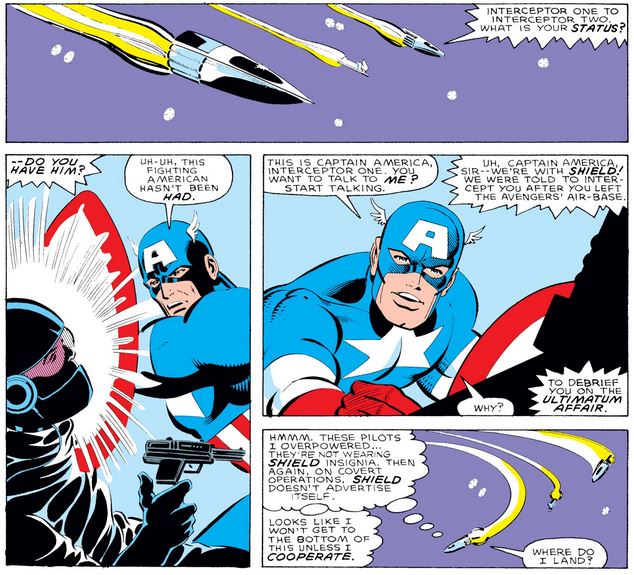 Next, we get a little more detail about his current conflict with SHIELD, the reasons for which foreshadow his upcoming difficulties with the U.S. government… 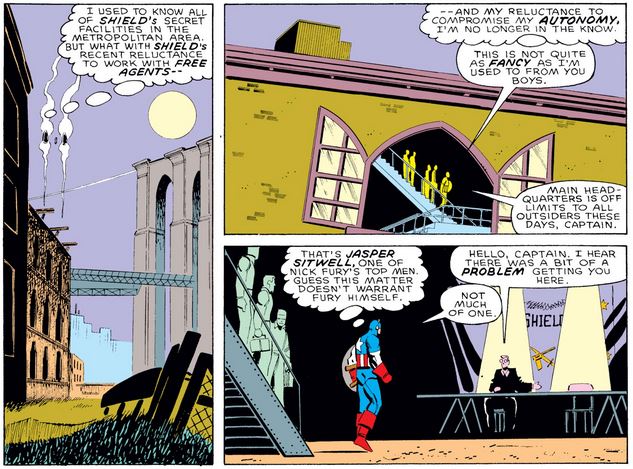 …before Sitwell lays out the story as he sees it, focusing more on Cap’s official independence than what he actually did. 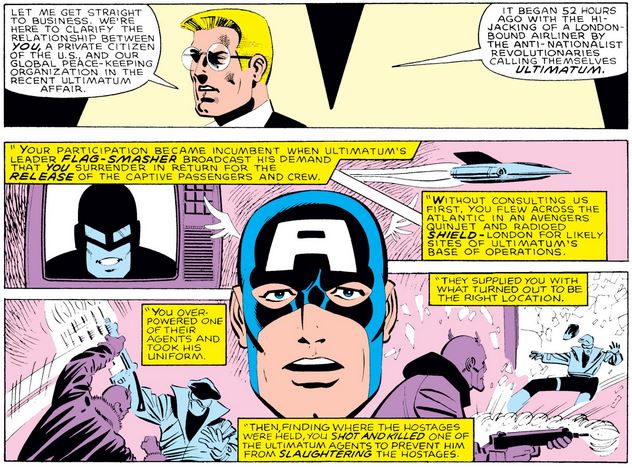 After he wraps up, he shows Cap the press coverage—just one example of many, I’m sure, and hardly a flashy one. (I’m sure J. Jonah Jameson was very conflicted himself, loathing costumed heroes in general but admiring Cap.)

Again, Sitwell emphasizes Cap’s “unsanctioned” involvement and the charges pending in Switzerland because of it… and offers him a way out.

And think about it he will, but for now we will rejoin John Walker, who meets up with Ethan Thurm, his manager/promoter/public relations agent who previously worked with the Ultimate Class Wrestling Federation (last seen in issue #316). If that isn’t enough to cast an even darker shadow on Walker, his refusal to intervene in crimes that aren’t publicity-worthy should clinch it.

We’ll get to Walker’s rally soon enough, so let’s turn back to Cap, who still maintains a residence at Avengers Mansion when he’s not on the road. It seems that word of the Switzerland incident is getting around and the fallout has begun, as press interest builds… 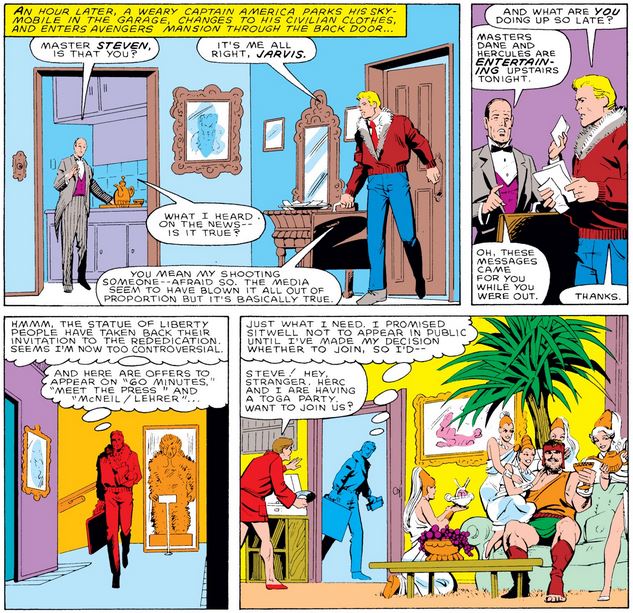 …and Dane Whitman (the Black Knight) is of little help. (“I’ve never gotten over killing, and it wasn’t even my fault!” Thanks, pal.) 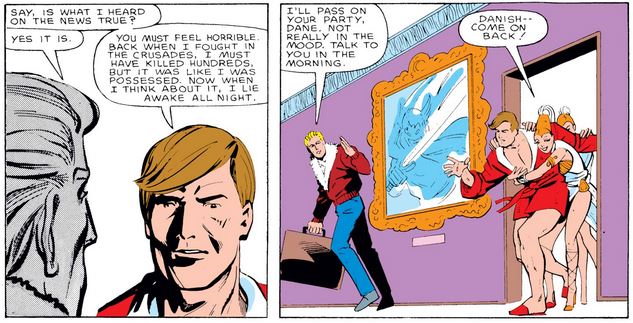 Look whose picture is prominently placed in Cap’s room: someone he obviously misses talking to. (This is all the more striking if you remember how long it took for him to open up to her at all.)

What’s Bernie Rosenthal up to these days, anyway? She’s wishing she could talk to him too… but we do learn that they have weekly phone calls, which is very heartwarming.

Steve is still thinking about SHIELD, but realizes it would mean letting go of other things, including his autonomy. (What about his comics gig, you ask? You’ll see in the next post.) When he sees one of Walker’s fliers, though, he’s surprisingly and optimistically interested…

…until he gets there.

Walker is delivering his spiel, focusing on patriotism as a brand instead of a concept, claiming it through empty words rather than demonstrating it through action. 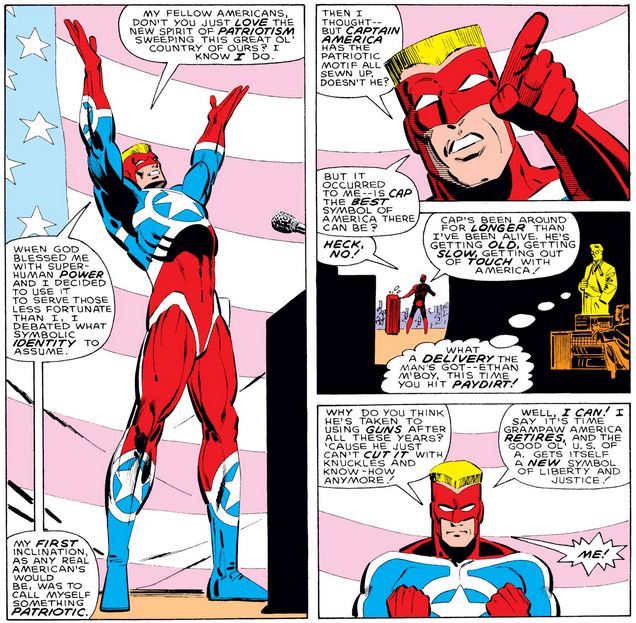 He finishes by criticizing Cap’s actions in Switzerland as reflecting weakness and age, which Cap takes personally while reminding himself that Walker can say whatever he wants… a thought that is interrupted by quite the sight on stage.

The three newcomers “defend” Cap, but not exactly in the way he would like… and naturally he’s more concerned about the safety of the crowd. 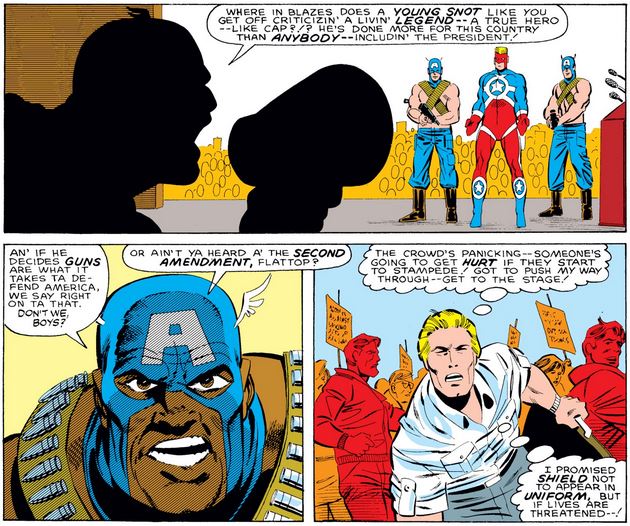 That’s Lemar Hoskins with the megaphone, by the way, although he won’t be named for a while. He and Walker trade oversimplified readings of the Bill of Rights until they throw down…

..with Walker putting on a show of defeating the “Buckies” until the police show up, after which Walker calls for unusual political action. (A scholar of the legislative process he is not.)

At least Cap is growing suspicious, especially after he sees the “police” take the Buckies away in an unmarked vehicle.

Later, as Walker and Thurm celebrate their successful “exhibition,” Cap pays them a visit… incognito (if that’s what you want to call it).

Walker and Sturm are slow to catch on, until Cap gets straight to the point, questioning the sincerity of Walker’s patriotism.

Cap’s request is relatively modest, considering: He’s only interested in keeping civilians safe, not shutting Walker down (despite his insults and mockery). But Walker just sees an opportunity for more publicity.

Cap continues to show Walker what class and dignity are as he turns down the “offer,” dismisses any reaction on Walker’s part, and reasserts what it means to be a national symbol (and a patriot).

Cap is satisfied with himself, and returns to considering SHIELD’s offer, when the Buckies carry out Thurm’s idea.

Cap finds himself having to fight in plainclothes, and realizes for the first time how jacked up the Buckies are.

Cap takes the chance to use his judo (emphasized more often in the early Tales of Suspense years) while one of the Buckies lets slip that they are Ultimate Class Wrestlers—that is, super-powered.

“That’s my favorite suit. That’s my only suit!” (Apologies to Kendra.)

Soon, Cap makes one of the most important speeches of his life. In the first half—I couldn’t bring myself to split the image—he takes responsibility for what happened in Switzerland, expresses regret over what he did even though he had no other choice, and affirms that he believes killing (in general) is wrong.

In the second half, he is rather hard on himself, given his reasonable, justifiable, and frankly admirable actions that day: He says those actions should not be “condoned or sanctioned,” and that he stands ready to face whatever legal consequences there may be for his actions. (One would imagine charges are unlikely to be pressed exactly because his actions were justified; in other words, even though killing in general is wrong, his specific act of killing the ULTIMATUM agent was right because it was done in defense of others’ lives.)

Next, he stresses how seriously he takes his actions, and asks for forgiveness, which again is unnecessary if his actions were justified. (Again, one would imagine there’s only one person who thinks he needs forgiveness, and it’s the one with the A on his forehead… but we’ll see in the next post that one would be wrong.)

In the last two panels, he admits to human imperfection and the inability to live up to one’s own standards—emphasizing the importance he places on integrity, but failing to recognize the danger of setting your personal standards impossibly high—and finishes with a fine message about always trying to be better.

Of course, Walker and Thurm can only view Cap’s speech through their own lens of self-promotion, missing the point entirely.

We’ll be seeing Walker again in issue #327, and soon after that he will become an increasingly central figure in the book (wink wink).

Also this month, in a story written and drawn by legendary Batman artist Norm Breyfogle for Marvel Fanfare #29, we meet two little kids who may not have seen Cap’s press conference, but who will become inspired by him nonetheless, and in a much more direct—and nearly silent—fashion.

…and then “Colossal” Craig himself, who snatches the boys up just before Cap arrives on the scene.

Craig hides with the boys in an empty classroom when he is spooked by the rustling flag outside, giving Cap the chance to burst in through the other window and disarm Craig. 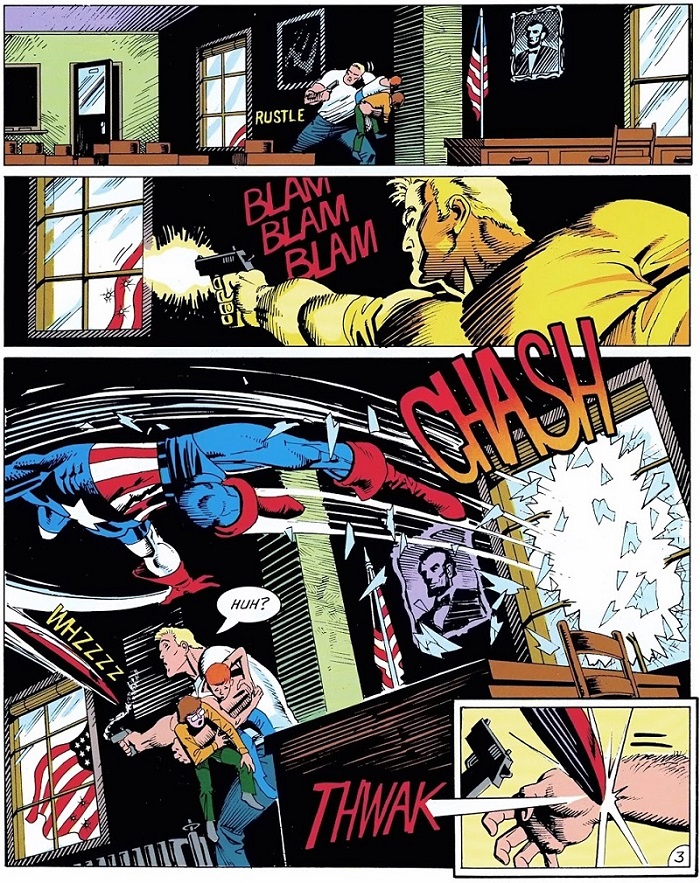 Those of us old enough to remember smacking erasers together, and then choking on the resulting cloud of chalkdust, will appreciate Cap’s tactic below.

Cap considerately washes the chalkdust off Craig’s face, and then grabs the dropped gun before his foe can.

(Is Craig afraid Cap will shoot him? I’m sure news of the Switzerland incident went over big with a certain faction in prison.)

Finally, Cap finishes Craig off with three rhyming blows, and the two boys find a common interest at last.

On the final page we see how the boys were inspired by Cap’s example to improve themselves, each in his own way (although I hope the bully learned a more character-based lesson as well!). 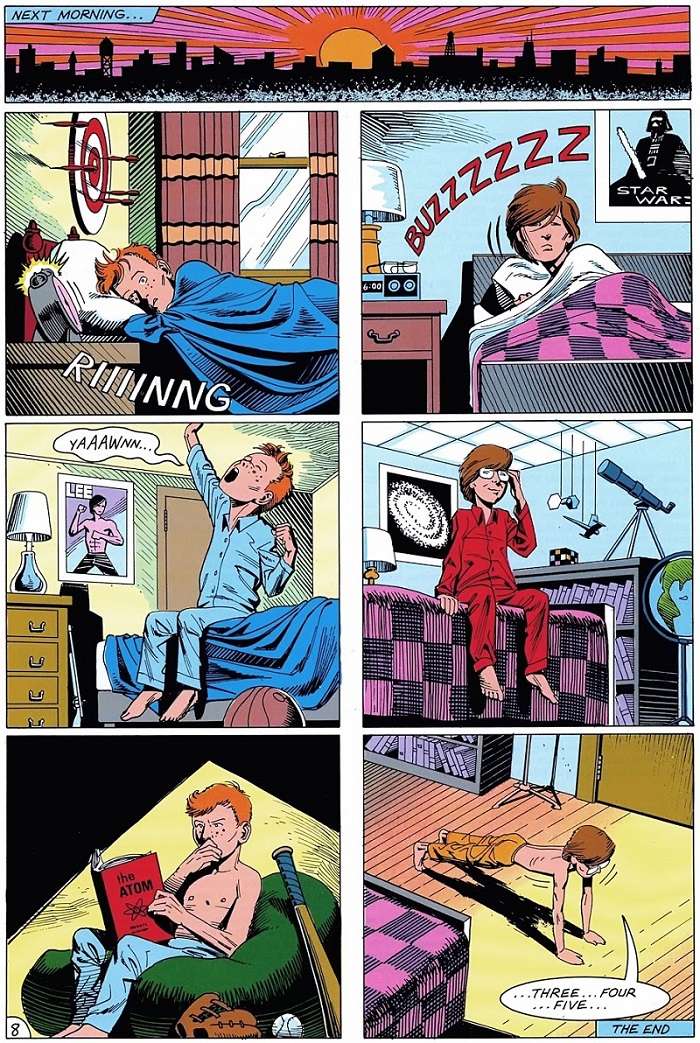 Not yet collected—although the main story about the Hulk is, because it ties into the Scourge storyline, which ironically sees it appear in several Captain America collections, but without the Captain America story in the same issue.