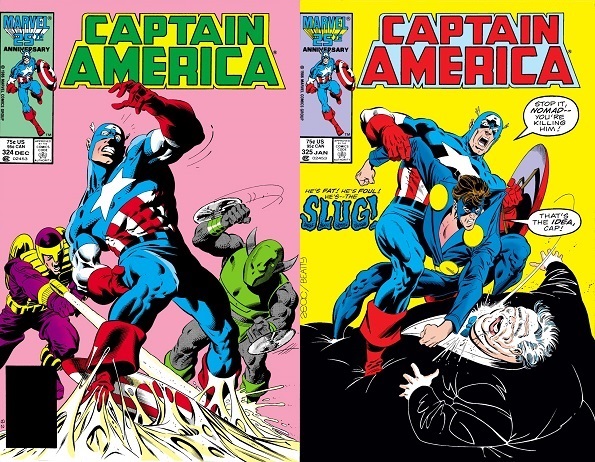 I’m covering these two issues together because a significant portion of each issue is taken up with the adventures of Nomad (last seen in issue #309), whom Captain America joins up with at the end of the story. More interesting for our purposes is Cap’s ongoing confrontation of the fallout from killing an ULTIMATUM agent in issue #321, especially the public’s new perception of him (which would seem to reflect a distinct misunderstanding of who he is and what he stands for).

In issue #324, Cap bursts in on a quartet of armed men who turn out to much more afraid of him than they ought to be.

After Cap discovers their weapons actually shoot water, the four would-be militants explain themselves, justifying their “combat maneuvers” with Cap’s actions in Switzerland. (“I learned it by watching you, Dad!”)

As if he needed a reason, Cap thinks back in that fateful day, including his ironclad justification, which he accepts in his head but not his heart.

He repeats the gist of his speech to the media from the end of the last issue, which comes as an immense relief to the man with the bright blue shoes, before Cap hangs his head, not just for his own inability to forgive himself for his past action, but for the public’s inability to do the same. (The pose in the second panel below anticipates Mike Zeck’s unforgettable cover to Captain America #332.)

Let’s take just a moment and check in with Nomad, currently busting drug dealers and leaving no uncertainty about who trained him.

We and Cap will catch up with Nomad in the next issue, but for now, Cap is back “at home,” reflecting on the public’s reaction to the news from Switzerland, including those afraid of him killing again and others who wish he would do it more often. (Yes, Frank, we see you.)

He reconsider SHIELD’s offer from the last issue but dismisses it once again, remembering his role as a national symbol, and then contemplates the unthinkable.

On his way to New York to meet with his old boss, Cap gets an alert from a former partner, and even though he acknowledges it could be another prank call, he can’t ignore it. 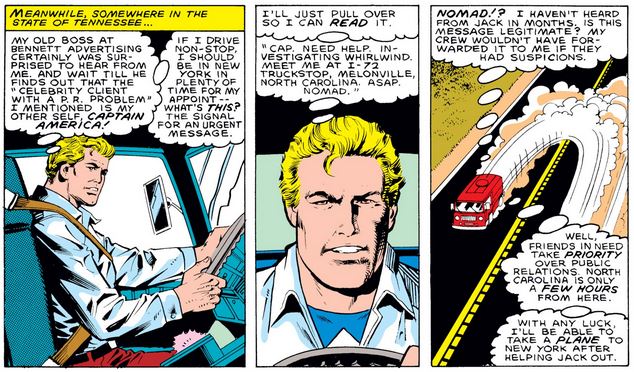 He gets to the truck stop and orders a burger, but doesn’t get a chance to eat it—man, his day just gets worse and worse—because Whirlwind shows up, as the message said, and Cap already suspects he has been manipulated again.

Cap learns that Whirlwind has gotten an upgrade (courtesy of the Tinkerer, as revealed earlier in the issue), and immediately reacts to protect the onlookers.

Cap takes off after Whirlwind on his motorcycle, but runs into a trap laid by—who else—the Trapster, and wonders why these two minor villains are suddenly out for blood.

Whirlwind’s answer is yet another reflection of the incident in Switzerland, but Cap doesn’t have time to ruminate on it… but the Trapster does confirm that the message from Nomad was a ruse (and a clever red herring on the part of writer Mark Gruenwald, given Nomad’s reappearance in this issue).

It’s no surprise that Cap prevails over these two-bit crooks, but he goes a bit overboard congratulating himself for doing it “without taking a life,” as if he had succumbed to a long-held and strong desire to kill in Switzerland and now has to struggle to hold it in check. (This is reminiscent of Batman’s frequently given reason for never killing, fearing if he crosses that line he would never stop.) He does apply the same “lesson” to his publicity problem, though, which is a relief. 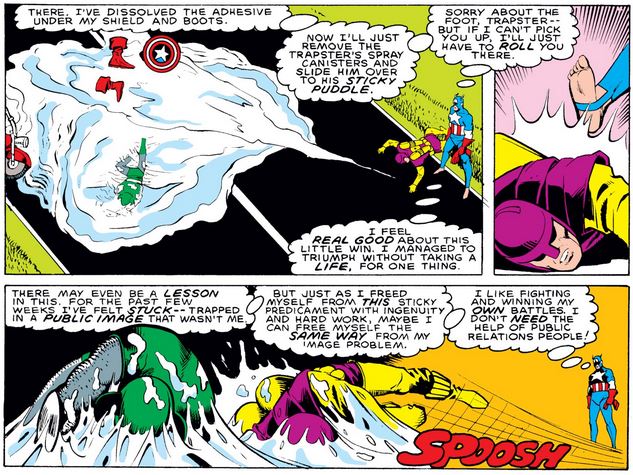 Issue #325 is heavy on internal monologue, starting with the opening splash below, in which Cap gives perspective on how his mission has changed since the war and how it requires the constant and diligent use of judgment.

And we get an interesting comment on his shield as a target, like a fly in a urinal or a bright yellow bat-symbol on a dark knight detective’s chest. 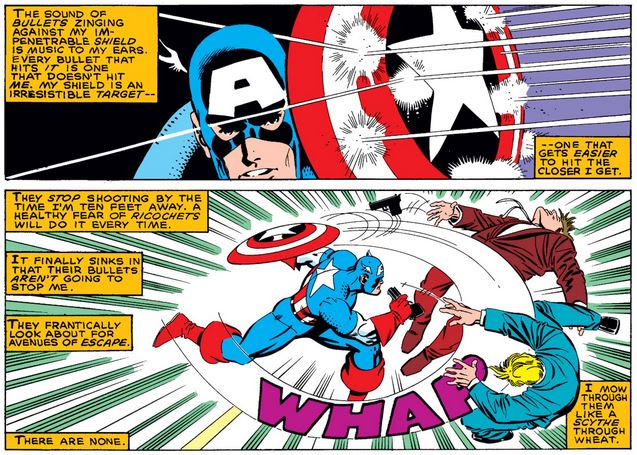 Oddly, he defends his well-known restraint on the basis of fairness—evening the odds, I guess, which is more appropriate for a game or sports match than the fight against evil—rather than proportionality or doing the least harm. And of course, one of the thugs makes a reference to Switzerland, which he once again needs to refute.

When the gentleman in green accuses Cap of an unforced error, he’s more serious than Cap realizes…

…which he quickly learns, offering an early version of his line from Captain America: Civil War about not being able to avoid a “situation pointing south.” 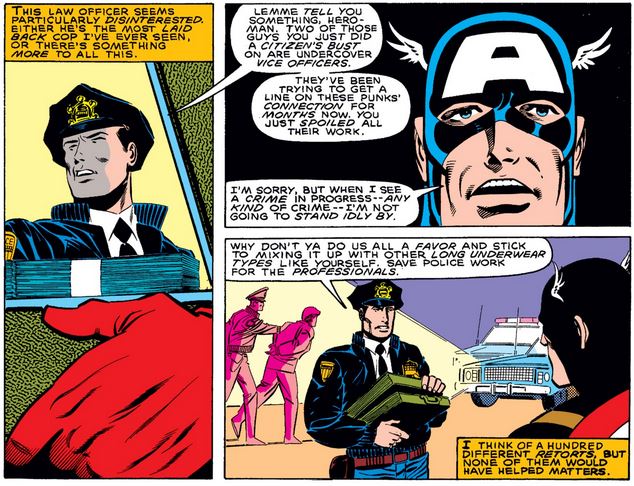 It would seem we could use a Marvel version of DC Comics’ Gotham Central, showing the difficulties of the police department’s job in a superhero universe.

As Cap walks away, he expresses a rare thought about the criminal justice process…

…which leads to fascinating questions about how to “maximize” justice—for instance, by sacrificing a “smaller amount” of justice to achieve a “larger amount”—or if justice is an ideal that cannot be measured or compared, and should simply be pursued without thought of trade-offs. For more on this, see Michael T. Cahill’s article “Retributivism in the Real World,” as well as his and my chapters in my edited book Retributivism: Essays on Theory and Policy.

Cap checks in with the Brooklyn crew (from issue #302) who repair his motorcycle (and who gave him the tip about the drug deal), and as usual he insists on paying for their services, while explicitly (and silently) appreciating their help.

Momentously, below Cap puts an end to the experiment that began in issue #237 when he moved into 569 Leaman Place in Brooklyn (although he decided to move out in issue #317 after his break-up with Bernie Rosenthal). He declares the conflict between fulfilling his duty and maintaining a private life too difficult, and chooses the former, thinking of himself first and foremost as a soldier, which is very interesting, being rare in this period.

(Someone more psychologically adept than this writer might accuse him of avoidance, but I won’t go there.)

There is one aspect of his private life that Cap is holding onto, though, as he acknowledges at the end of the panels below. 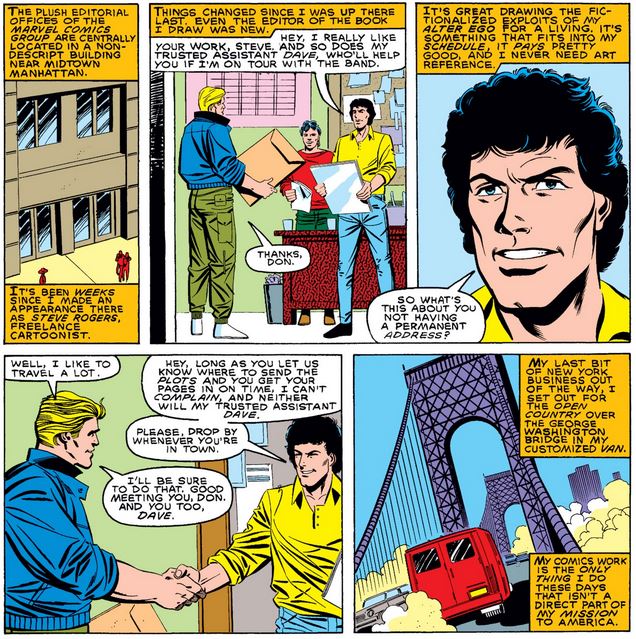 “Don” is Don Daley, editor of the in-universe Captain America book as well as ours, and “Dave” is David Wohl, his assistant. (And yes, Steve Rogers wears parachute pants—in the late 1980s, who didn’t?)

Back in his van, Cap receives another message about Nomad, about which he is suspicious…

…but follows through on nonetheless. The lead takes him to Nomad’s friend Priscilla, who gives him information he uses to find his former partner (who earlier was discovered hiding on the yacht of the druglord known as the Slug and tossed overboard). 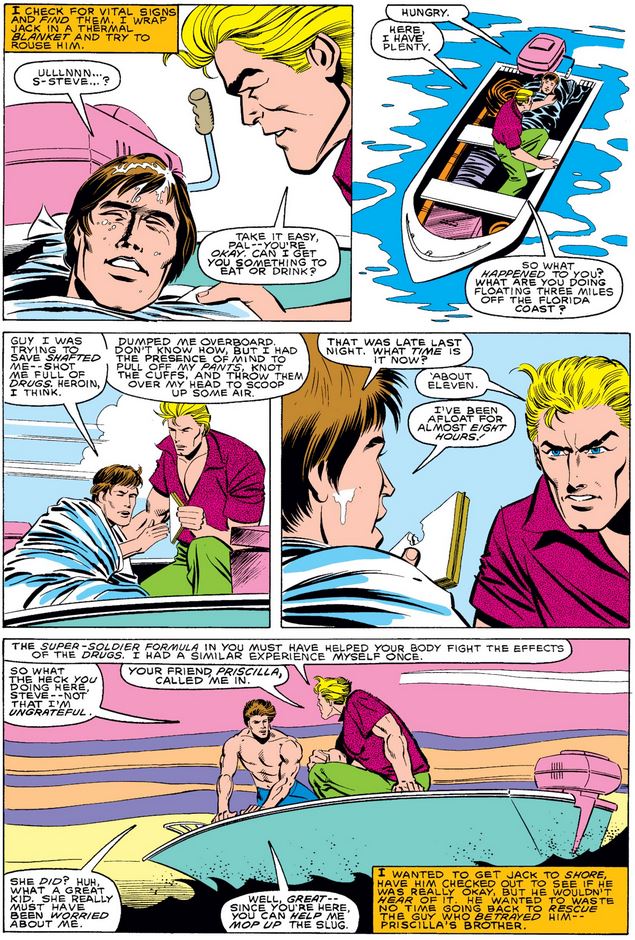 …which the younger man confirms in his own thoughts, while making plans to keep Cap out of sight at the right moment.

Nomad starts a fire in the yacht’s kitchen, presumably to create chaos to cover his plans, which also keeps Cap busy trying to get the passengers onto rescue ships in an orderly manner—not that the Slug’s men appreciate it.

His task finished, Cap goes in search of Nomad, finding him thrashing the Slug… 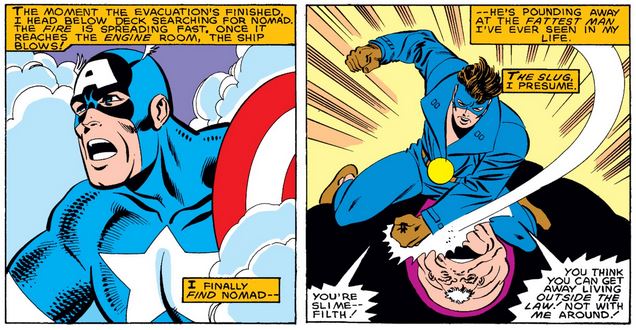 …and while Cap’s primarily concerned with getting Nomad off the ship before it explodes, he also has concerns with his friend’s version of justice, very different from Cap’s own, the incident in Switzerland notwithstanding. 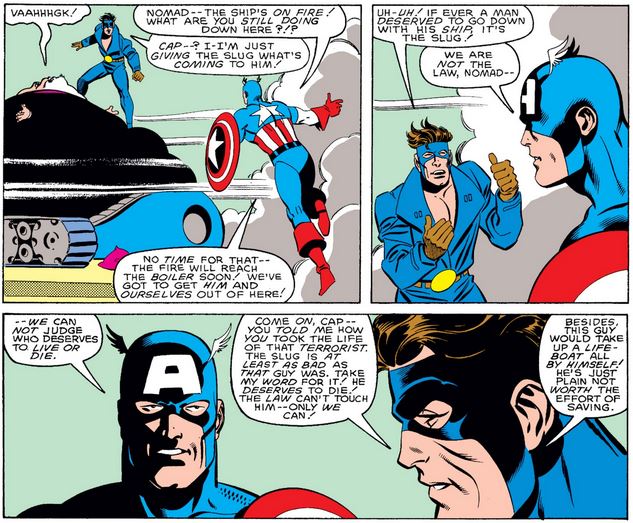 Cap would presumably argue that they haven’t exhausted all options yet, but has to devote his attention to saving the Slug, while Nomad chooses to help others instead—which Cap, in all fairness, acknowledges is a valid choice, given that one has to be made.

Before long the yacht finally explodes, after which Cap and Nomad reunite in the water, the Slug emerging soon afterwards (later to appear in a wide variety of Marvel titles, including Captain America and Nomad).