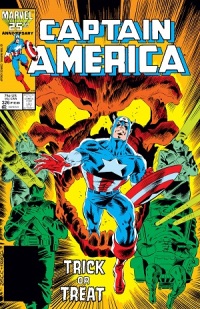 This Halloween issue takes us out of the current storylines about Nomad, ULTIMATUM, and John Walker—for the most part—and instead returns us to Skullhouse, the setting of “the death of Red Skull” from issue #300, where Captain America will see some ghosts, revisit some memories, and engage in a lot of internal monologue. (A lot.)

Our story begins with the splash below, explaining how Cap ended up back at Chez Skull and ending with a less snappy version of one of Wolverine’s catch phrases. 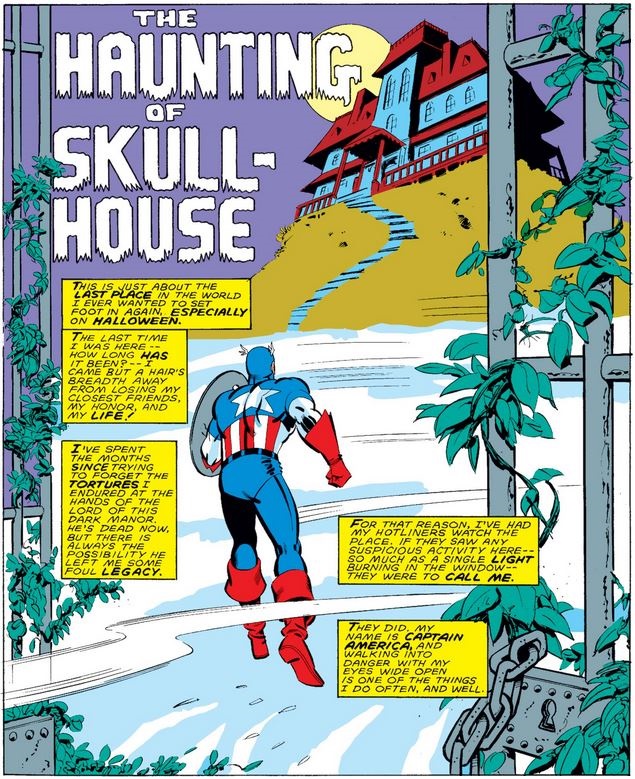 Let’s hope Doctor Strange never sees the first panel below—at the very least, one would think Cap’s battles with Baron Blood during the war and afterwards would have cured him of any skepticism—but he does make an interesting comment about the nature of evil at the bottom before eventually seeing his greatest foe (sans masque). 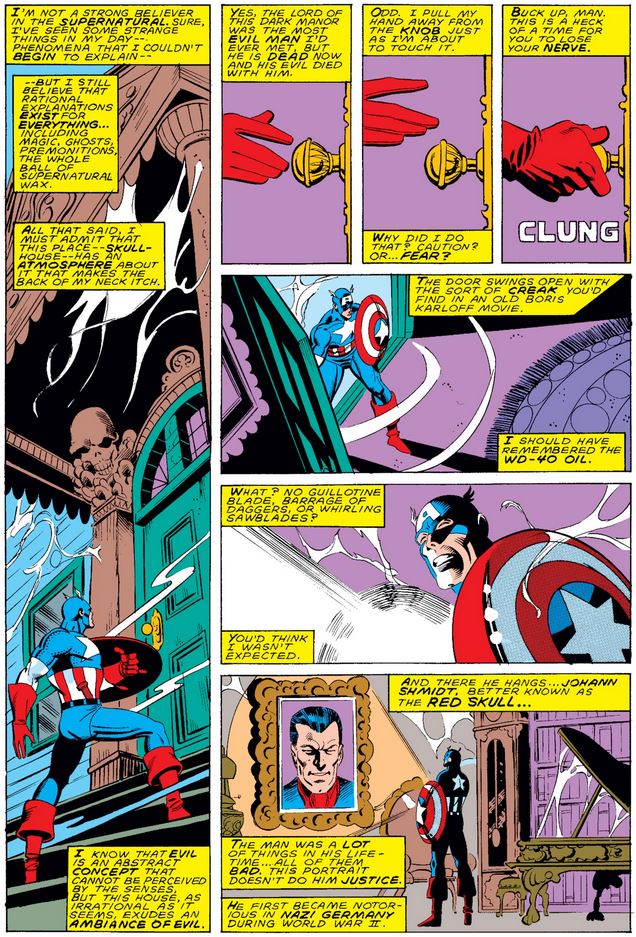 Next, Cap reiterates the part of his origin introduced in issue #255 in which he was given the identity of Captain America as a symbol of liberty, to counter the Nazis’ own, the Red Skull.

Cap asks himself a very good (and timely) question about what happened to the Red Skull’s body after he gave it to the fiend’s daughter in issue #301, before a strange noise attracts his attention… 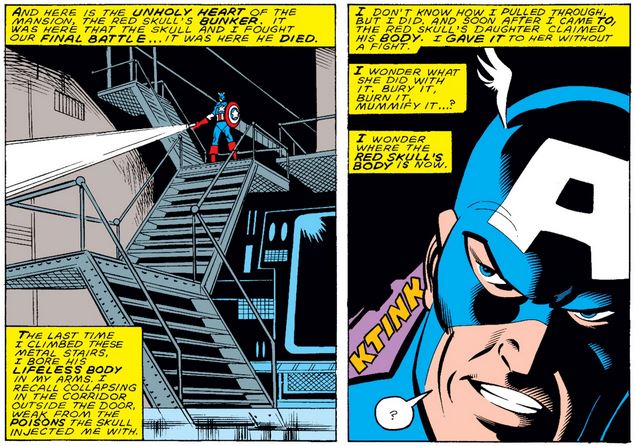 …at which point the man in question seems to appear. 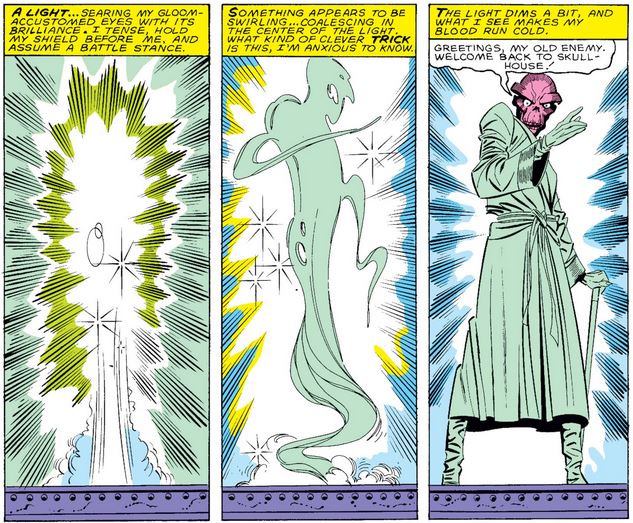 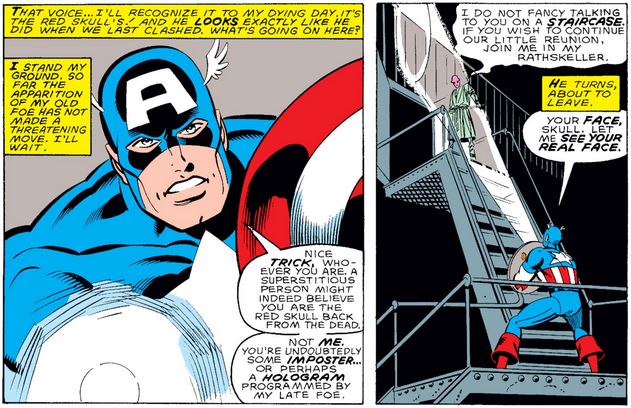 …which he maintains even after “the Skull” grants him his request. 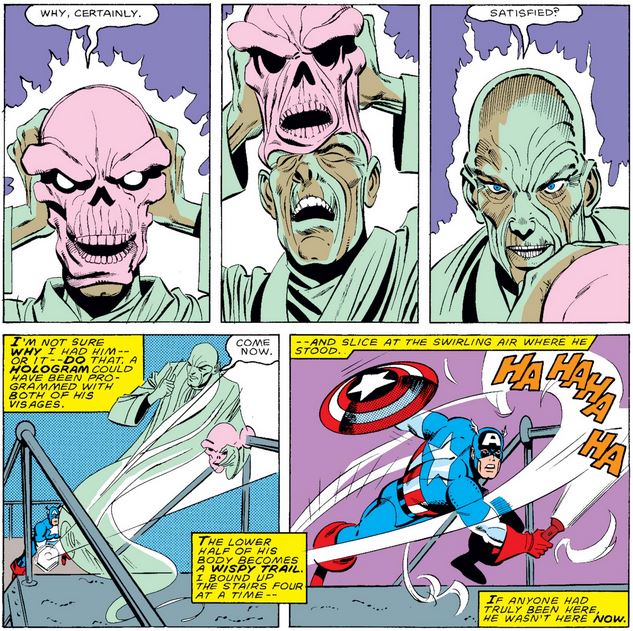 The Skull—let’s just call him that for now, without quotes—invites Cap for a drink, but our hero continues to test his theories about what’s going on… 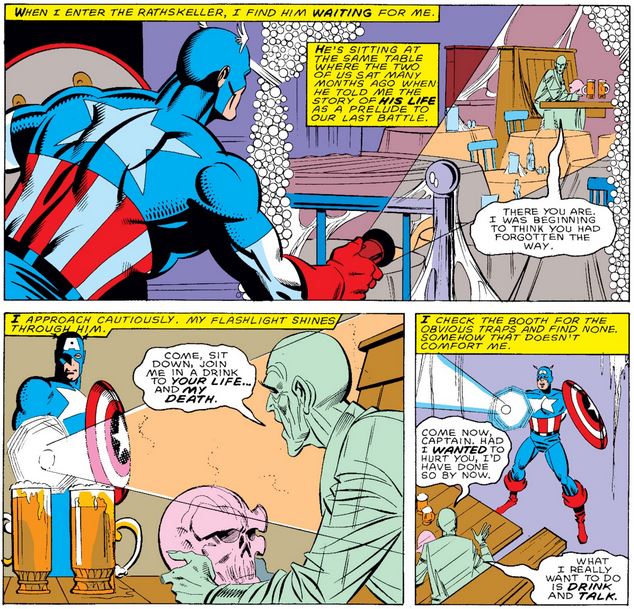 …literally taking a whack at one of them, before the Skull bemoans Cap’s lack of gratitude for all the glorious victories the Skull gave him. 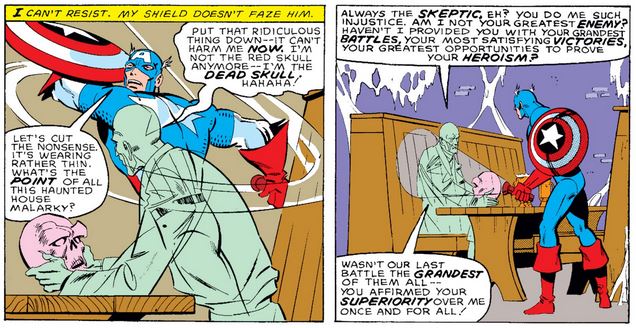 After the Skull summarizes their last battle, starting in issue #294 and ending with his death in #300, Cap realizes the flaw in his theory of a pre-programmed hologram. The Skull launches into a lecture about self-realization…

…concluding with seeing his plan realized after his death, albeit by a distinctly less colorful figure. 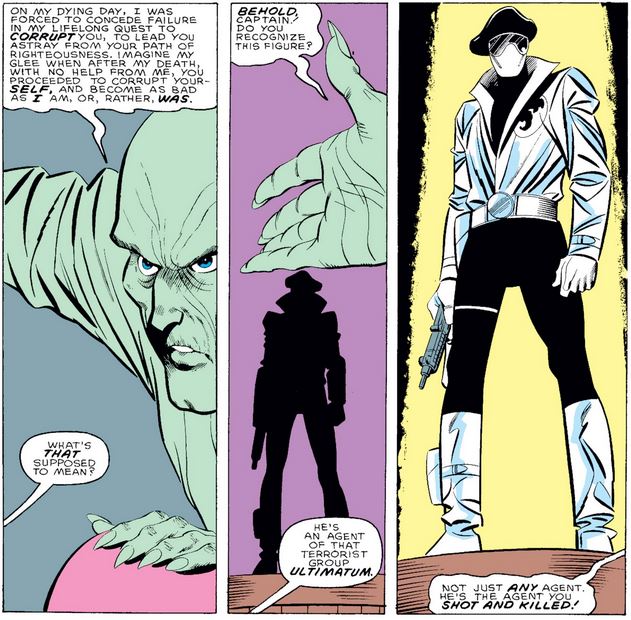 “I didn’t know you were called Vlad!” “Well, you didn’t bother to find out, did you?” (Apologies.)

Cap plays it cool while the Skull lays out his own theory of cosmic moral balance, drawing a rather extreme conclusion from a very flimsy premise. 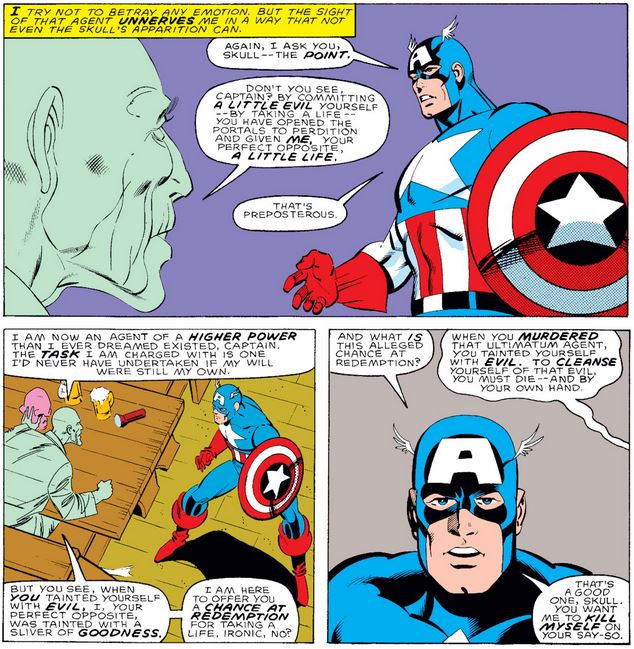 …against a group of fallen foes, including the ones he dreamed about in issue #322 the night after he killed the ULT—I mean, Korda. 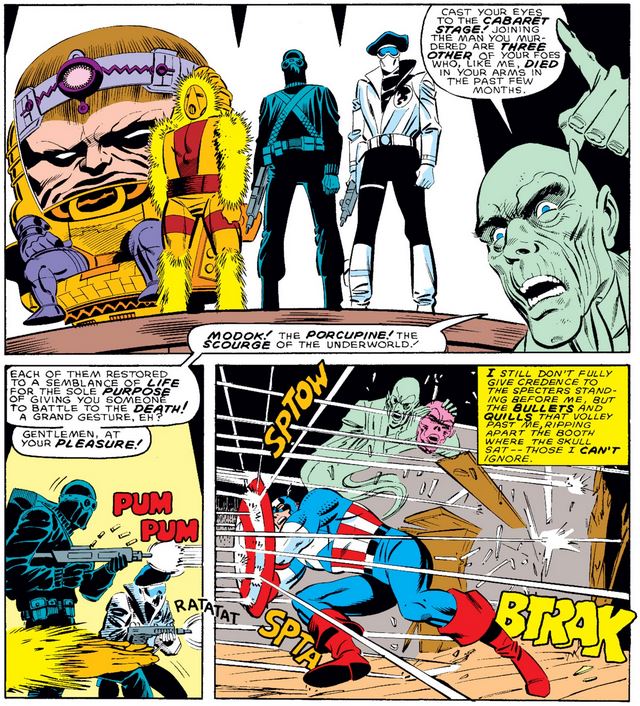 Cap doesn’t have the opportunity to question the reality of these enemies, as their weapons appear to be all too real. (And at least we get a fight scene!) 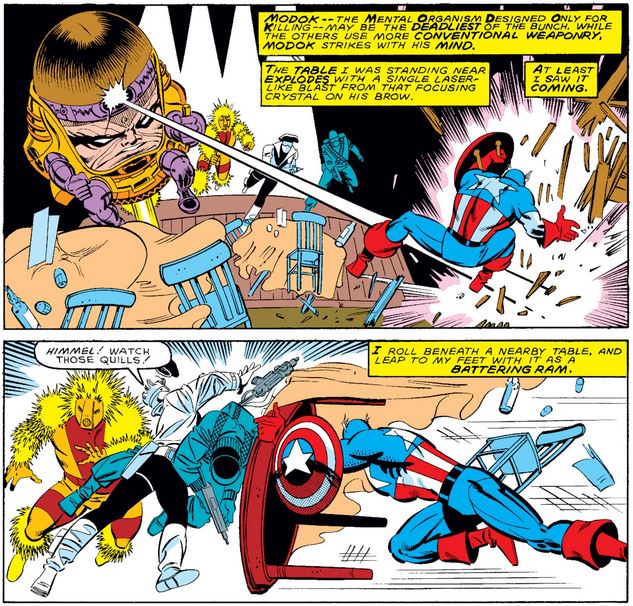 Cap’s thoughts reflect some of his martial arts knowledge as his actions similarly reflect years of training to throw his opponents off-balance mentally and physically. 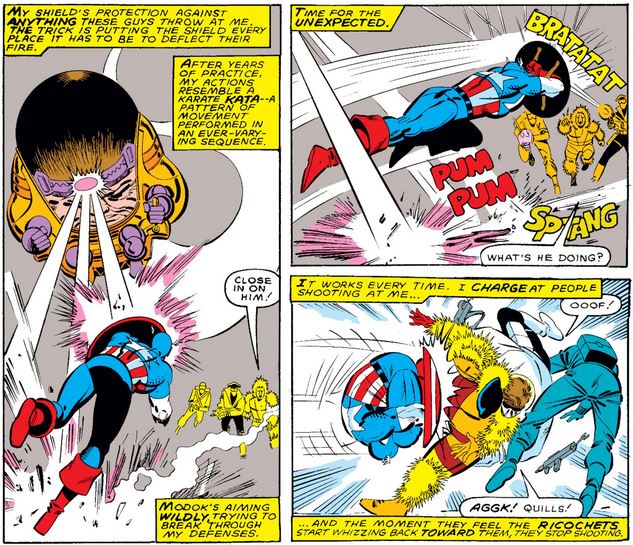 Cap uses his shield to break a hole in the floor to fall back and adopt a better vantage point, and after a few more pages of fighting, his exhaustion builds but his perseverance does not lapse. 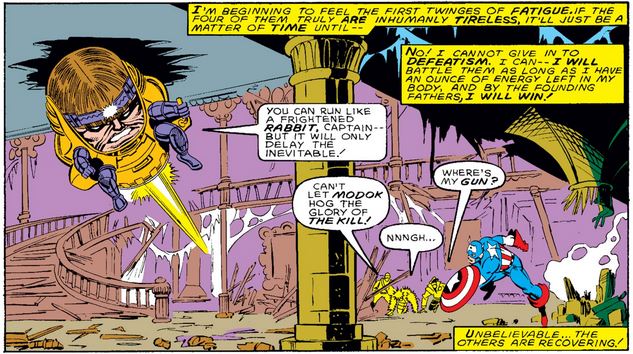 Finally, we get a glimpse of the wizard behind the curtain, and it sure doesn’t look like Johann Shmidt. (The line about Cap battling “the demons of his own mind” could clue you in to his identity.) 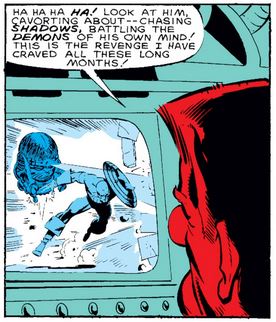 Cap concludes from their continued strength that his enemies cannot be human and therefore stops holding back… and realizes, too late, that pushing him to go this far may have been the Skull’s plan all along. 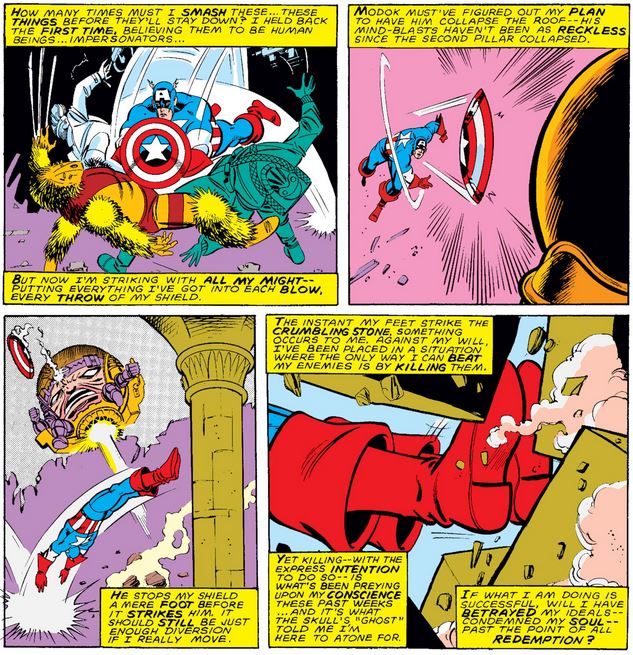 As he leaps to his safety, Cap considers the ramification of the nature of his own Frightful Four as the ceiling collapses on them.

(That suggests an interesting question: Could Cap actually will himself to believe in ghosts? See here for more on voluntary belief, courtesy of Philosophy Talk.)

Our mysterious man-in-charge is growing impatient with Cap’s indefatigable will, revealing his ruse (to us, at least), questioning whether Cap can even acknowledge the possibility of defeat (has he even been reading this blog?), and finally popping in his favorite Three Dog Night eight-track and just rocking out.

Cap’s hallucinations take a very personal turn, starting with the predictable, but joined with a strangely positive message… 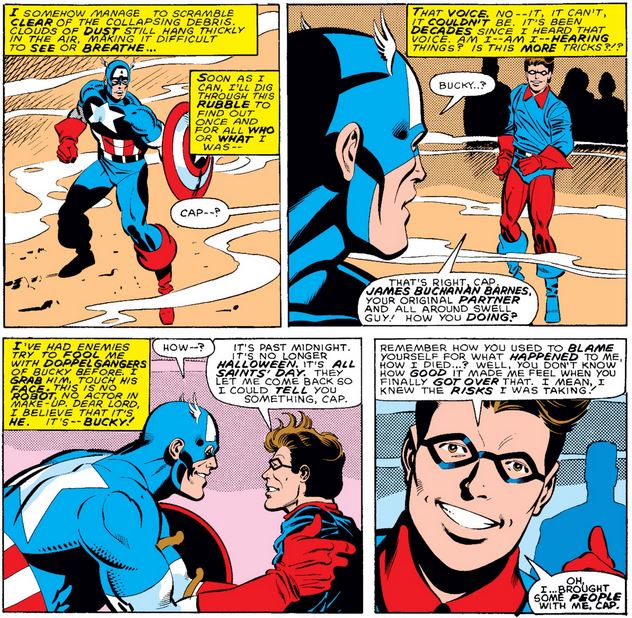 …before three more “ghosts” appear, all seen much less often than Bucky (and one of them is actually alive, although Cap won’t find this out until issue #445).

At first, Cap’s “loved ones” continue Bucky’s supportive and heartwarming messages, but soon they start singing the same tune about sacrificing his life to balance the one he took. 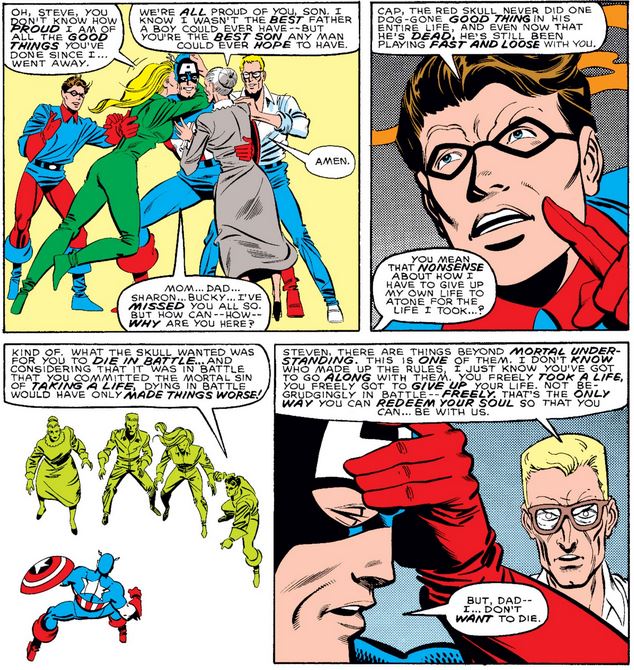 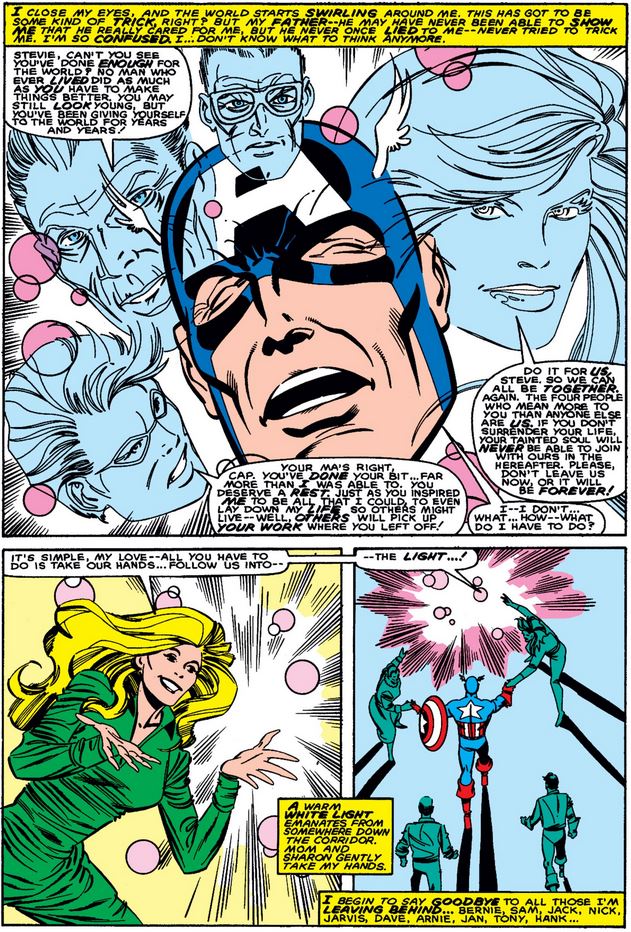 …which he almost succumbs to, likely due to his exhaustion, before he comes to his senses and realizes these “people” do not actually have his best interests at heart!

This is the final straw for Cap’s manipulator—”surprise”—Doctor Faustus, who abandons his more artful psychological torture in favor of good old-fashioned death traps. But wait… 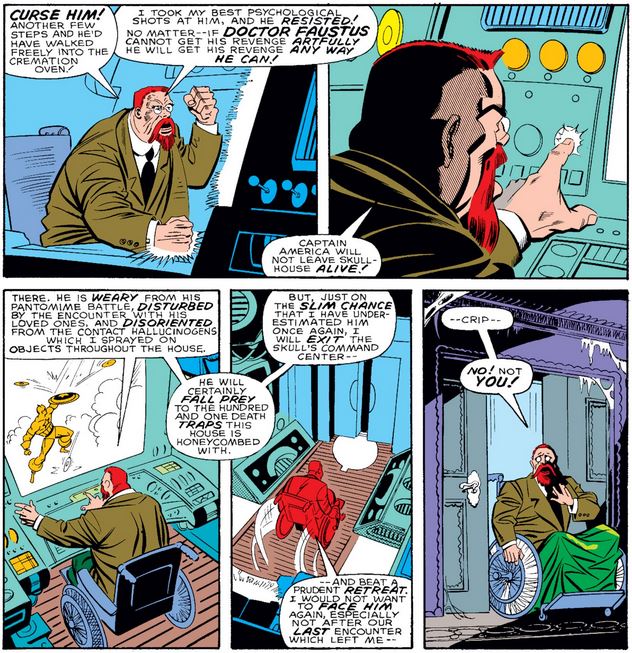 …this isn’t one of his plans! 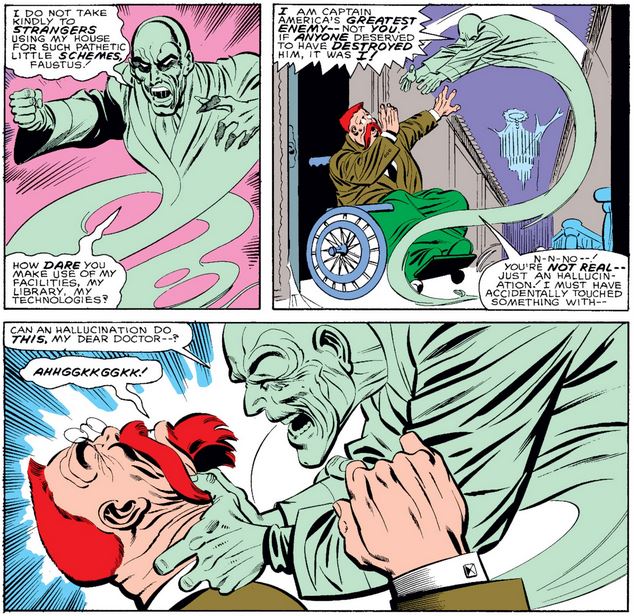 Meanwhile, Cap manages to get past (or through) all the death traps, and finds Faustus—”oh right, him, that makes sense”—waiting very patiently and peacefully for him. 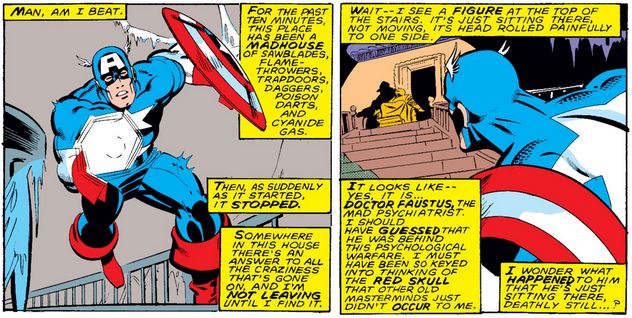 At the story’s conclusion, Cap is relieved that he still has no reason to believe in the supernatural… 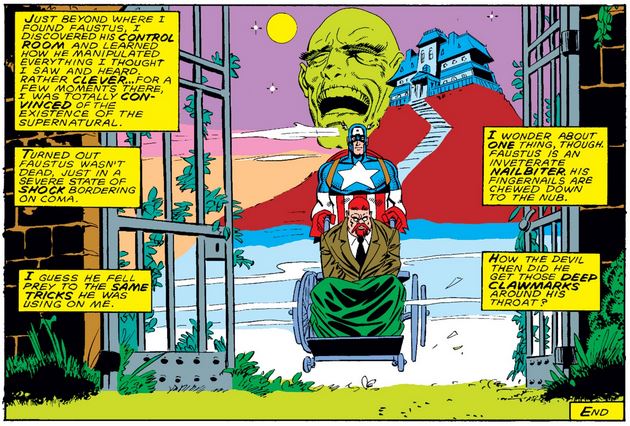 …no reason at all.