This issue wraps up the story begun in the last issue, wherein Captain America fought with domestic terror group the Watchdogs, who unbeknownst to him have recruited his old neighbor Mike Farrel. As revealed on the cover, we also invite John Walker, aka USAgent, to the party, which also includes Cap’s ex-fiancée Bernie Rosenthal, back for a second try at Cap’s heart. As a bonus, we also see our hero in two of his friends’ books, in which we see him in a more laid-back role (which I think he has definitely earned).

In Captain America #386, our hero visits his favorite meditation spot to distract himself while his mind works on how to find the Watchdogs and their hostage, Bernie. 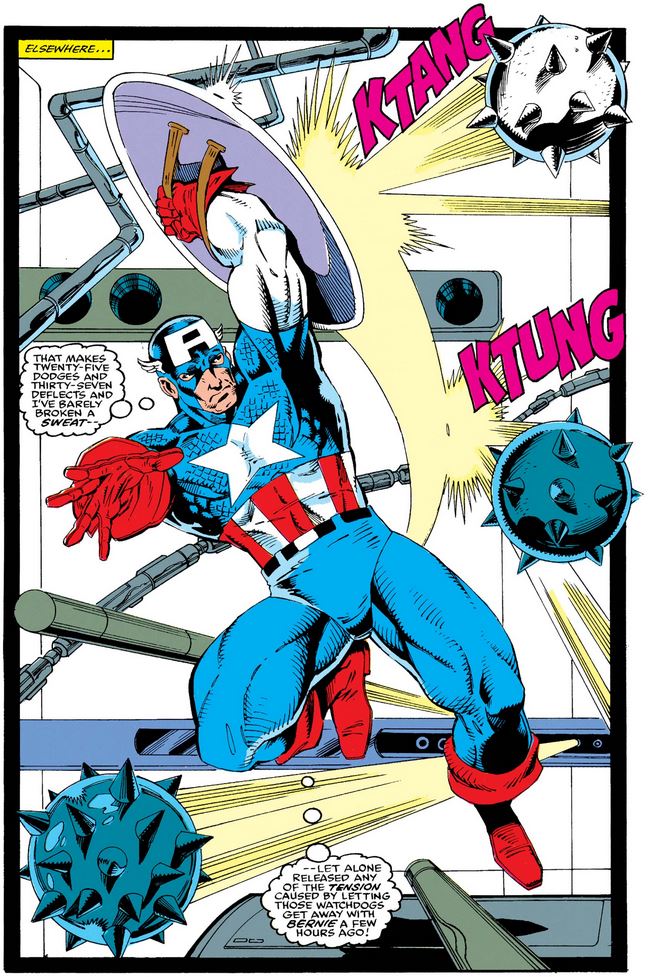 He seems strangely passive, but this could also be considered as a mature awareness of his limitations (although I don’t know if Bernie would see it that way). While watching him, John Jameson keenly observes that even a superhero in perfect human physical condition nonetheless has to work out to maintain it (a point that we will see echoed in this month’s Captain America Annual #10).

A visitor? Who could this be, pray tell? Someone who has a history with the Watchdogs and wants a piece of the action—and who Cap does not want involved, for exactly that reason (and more).

Cap puts his foot down, telling Walker that, whether or not he’s an Avenger—and he is not—he’s not welcome on this mission. 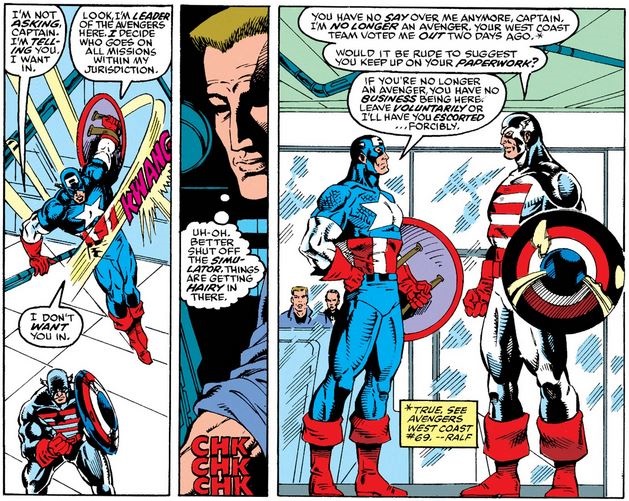 USAgent tries one more tactic, the ol’ “you owe me” bit, but Cap isn’t buying it, holding the line that the mission is more important and he doesn’t regard Walker as qualified to further it. 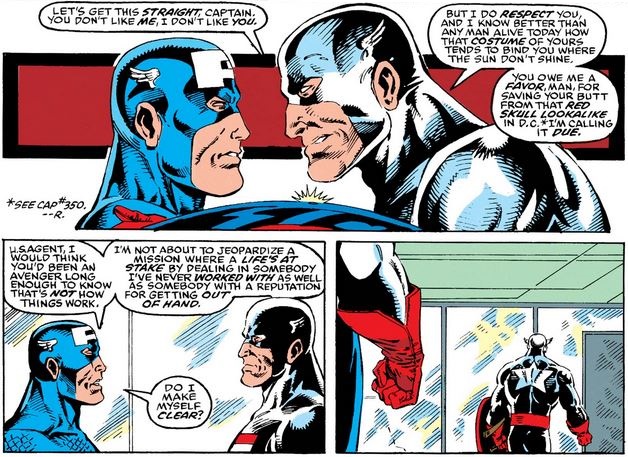 Cap is quite restrained while telling one John about the other (although “great big pain in the posterior” is close to the line for him), and who knows what else he might have said had Fabian not burst in spouting what is perhaps the worst nickname ever for the Sentinel of Liberty. 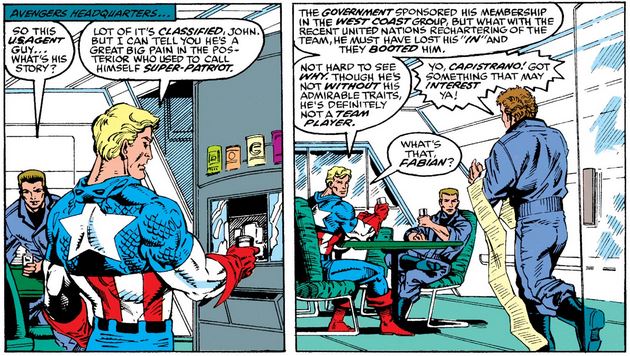 Well look who turns out to be the detective in this group! While Cap was working out his frustration and dealing with Walker, Fabian was at the Bat-computer putting two and two together.

Who is that in the hat… ohhhh, it’s Cap, in disguise! Wow! However masterfully he circumvented the advanced security at the art gallery in Soho, I doubt he’ll be able to convince people he’s the artist he’s speaking to…

…nor can he disguise his dislike for his art (although he’ll protect him all the same).

When Cap returns to the van, we see one of the most heartbreaking panels of his comic book history. 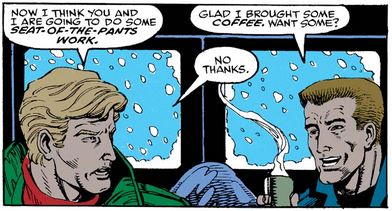 Must be a Skrull! (Or else John makes awful coffee.)

Before long, they see two thugs abduct the artist from the gallery, so Cap follows them on his skycycle to a ski lodge, hoping to catch the Watchdogs and find Bernie. After he cuts the power, their own security shows up, against which Cap reluctantly protects himself. 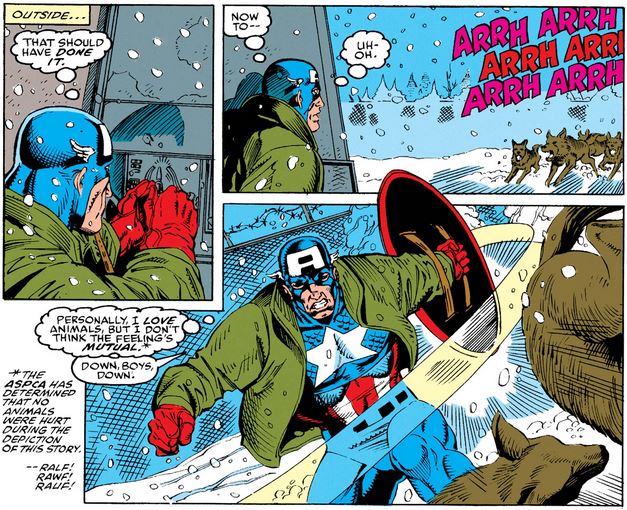 After breaking through the front door and setting the dogs on a wild goose chase (after his jacket), Cap goes into stealth mode to take advantage of the commotion. He manages to find Mike Farrel, now a captive of the Watchdogs (which conveniently leaves Cap unaware of Mike’s membership in the group).

But you know who doesn’t do stealth? That’s right… this guy. (Well, Cap did want a commotion.)

As Walker works out his grudges against the Watchdogs, he flashes back to the epiphany against violence and killing he had in issue #383 (in a back-up story not covered in our post on the issue), and he holds himself back. 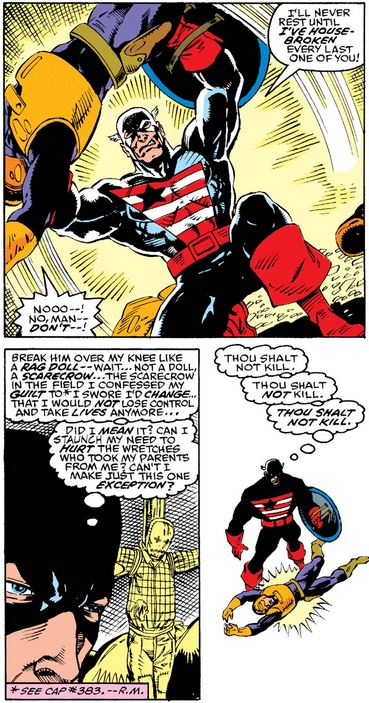 Meanwhile, Cap locates Bernie and other captives, but before he can free them, he senses someone behind him…

After they wrap up the case, Walker wants recognition, but Cap maintains he could have done better on his own… and I can’t decide if Walker’s laugh means he disagrees, or that he thinks Cap’s joking. (“Hah! Good one, Cap! You so needed me.”) 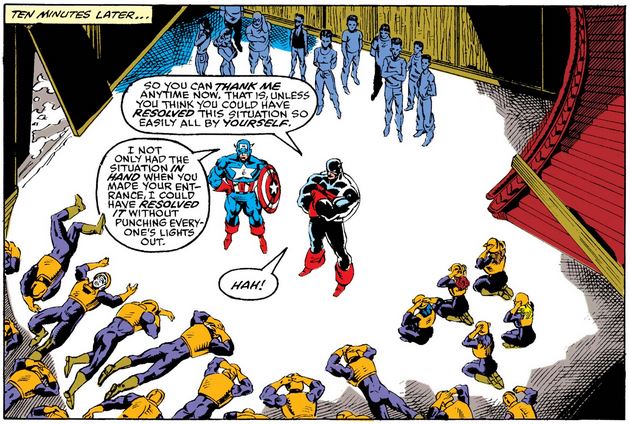 At least Cap recognizes that Walker held himself back and commends him for it. 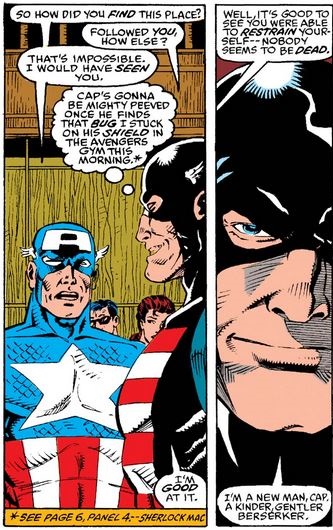 The story ends with Mike honorably confessing his involvement with the Watchdogs, condemning the wrongful means they took towards ends he retains sympathy for, and turning himself in. 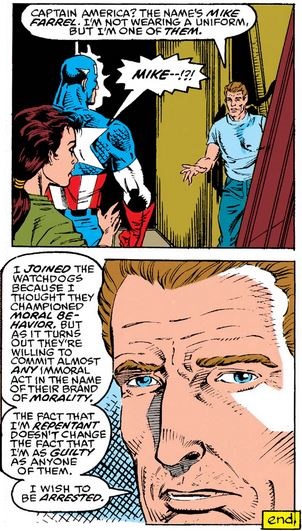 We will see how this affects Mike’s life when he re-appears in a couple years. (Hint: It’s not good.)

Before we sign off, let’s see what Cap was up to in other titles this month. In Namor the Sub-Mariner #15, Cap—once again in the Avengers’ gym—receives a visit for Namor, over whom he presides as probation officer since his trial for crimes against the surface world in issue #13, a duty that he is now called to enforce (not that Namor cares one way or the other) 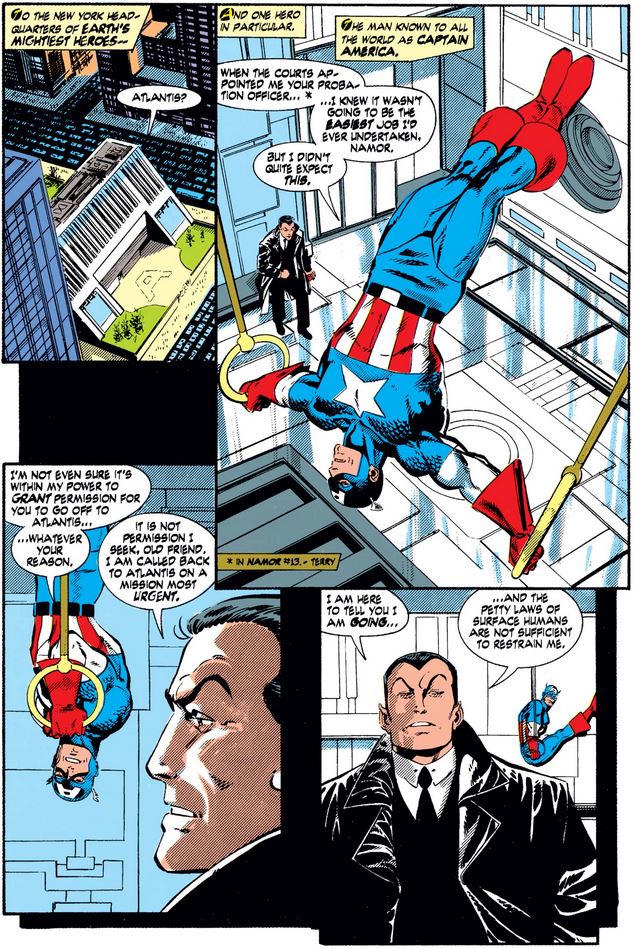 But Cap is impressed that Namor has told him about his return to Atlantis rather than just leaving, so he allows it.

Finally, in Nick Fury, Agent of SHIELD #24, we join one of Ben Grimm’s legendary poker games (as seen in Marvel Two-in-One #75, for example), during which Cap subtly reminds his old friend of the importance of duty and responsibility… even on his day off.

After Nick gets an update on the mission at hand, he tries to gloat to Cap that he would won that hand… but sadly it was not to be. 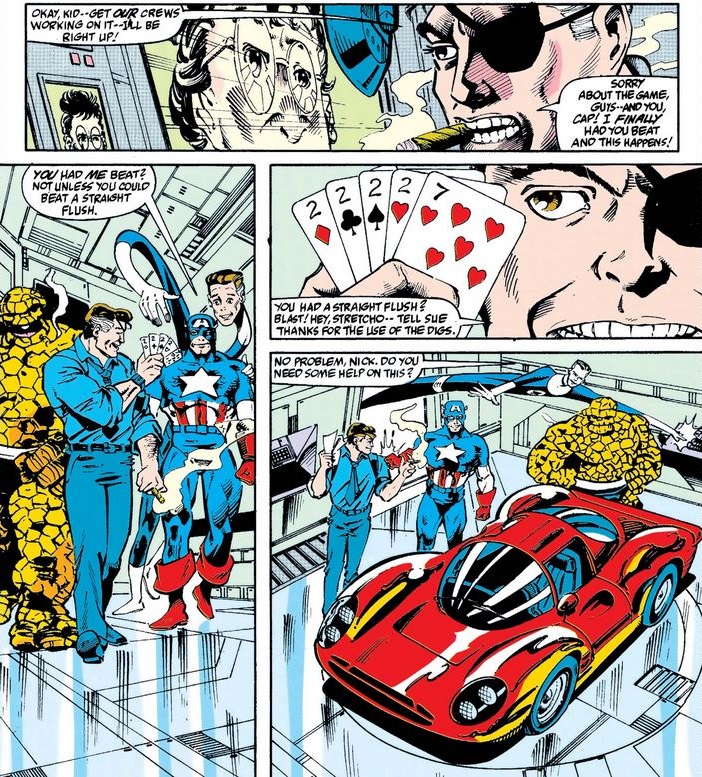