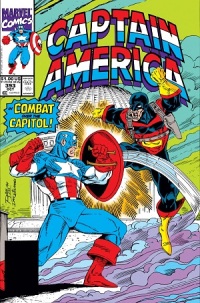 This issue serves as a transition between “The Superia Stratagem,” which ended in the last issue, and the beginning of a five-part storyline focused on the Red Skull (with “Operation Galactic Storm” looming on the horizon beginning with issue #398). We’re also introduced to Captain America’s German counterpart, Hauptmann Deutschland, seen on the cover… but why are they fighting? (Hint: It has something to do with Skull-comma-Red.)

In a lengthy prologue, a trio of German superheroes (including our new friend “Haupt”) try to put the Red Skull and the Skeleton Crew on trial in Germany, only to have Cap, Thor, and Iron Man—actually “bioplastoids” courtesy of Arnim Zola—arrive and “take custody” of the villains, effecting a clever escape.

On page 11 we finally see the real Captain America, parting ways with most of his companions from “The Superia Stratagem,” even complimenting Paladin (regardless of how much it hurt), only to get the “Boy Scout” accusation back. Adding insult to injury, Black Mamba rubs it in Cap’s face that he made a good decision in not turning them in to the authorities back in issue #382, which suggests that Diamondback told them he was uncomfortable with the idea when they discussed it in issue #381, but she still gets a compliment also. (Everyone gets a compliment today!) 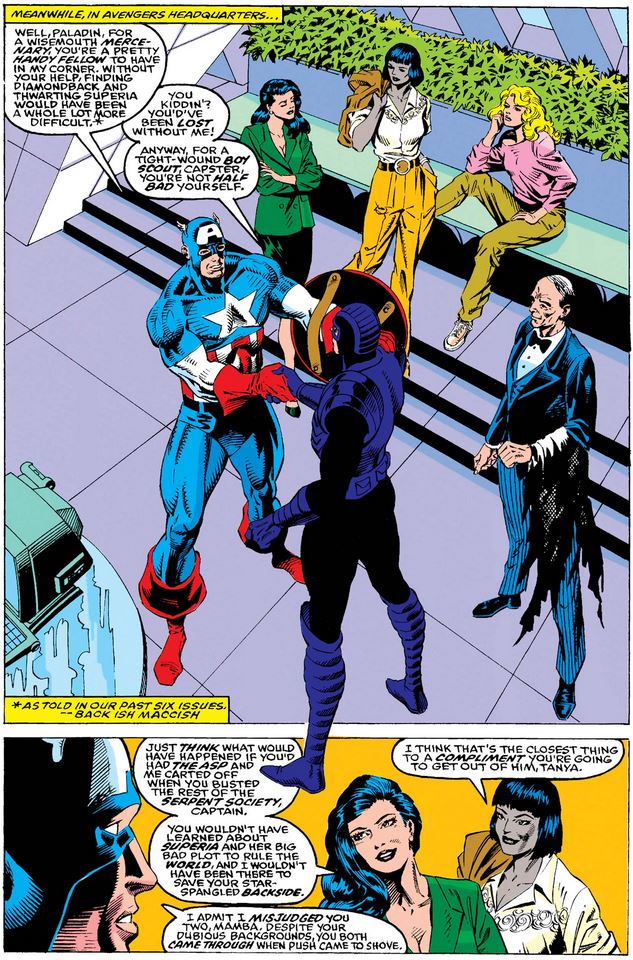 Cap offers to give Black Mamba and Asp letters of reference, but they decline, and before they take off with Paladin, Mamba reminds Cap that he ruined her costume while wearing it in the culmination of the last storyline. 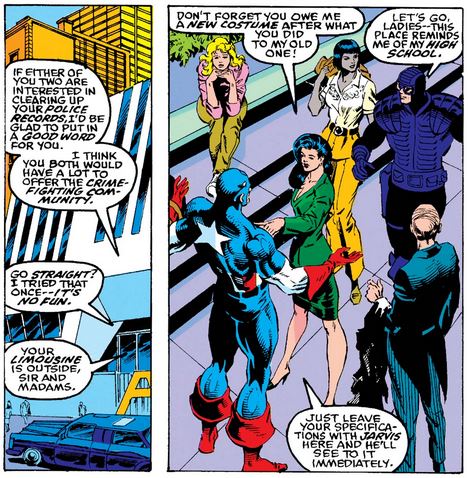 Cap is quite relieved when Rachel lets Paladin leave with her two friends, remembering when she left with Paladin at the end of issue #382 (the last time he saw her before rescuing her from Superia’s cruise ship). 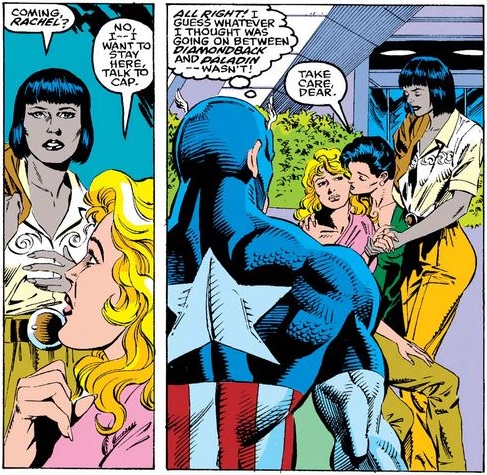 Once they’re alone, Cap lets his cowl down and asks Rachel what’s bothering her, and she lets him in on her decision to get out of costumed adventuring, for good or for bad, which she’s been thinking about since she last saw him. 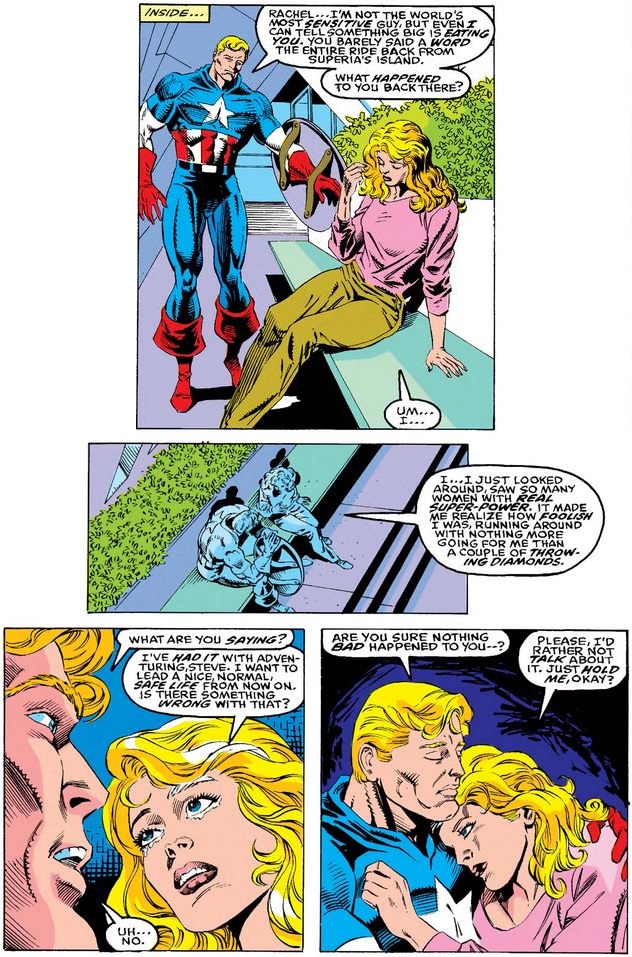 She is not, however, telling him about her run-in with her old enemy Snapdragon on the ship, which has clearly affected her—and not just because Snapdragon threw her overboard in issue #388! (Perhaps opening up about this would reveal details about her past she’d rather Cap not know.)

The next scene is hilarious, like a parent witnessing their kid’s first kiss. 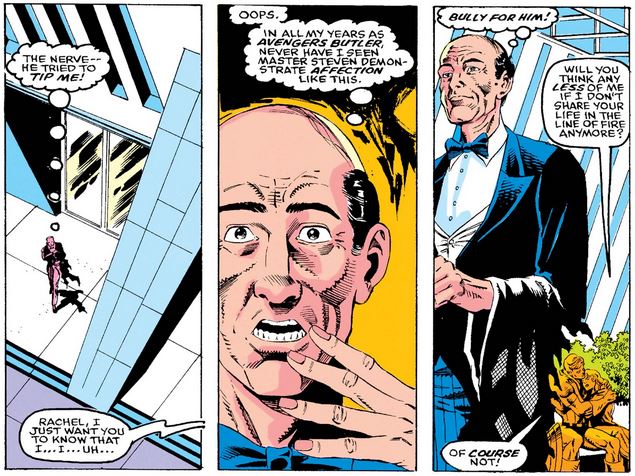 And don’t forget Bernie, who’s still in the picture (although he didn’t see much of her during the Superia business). 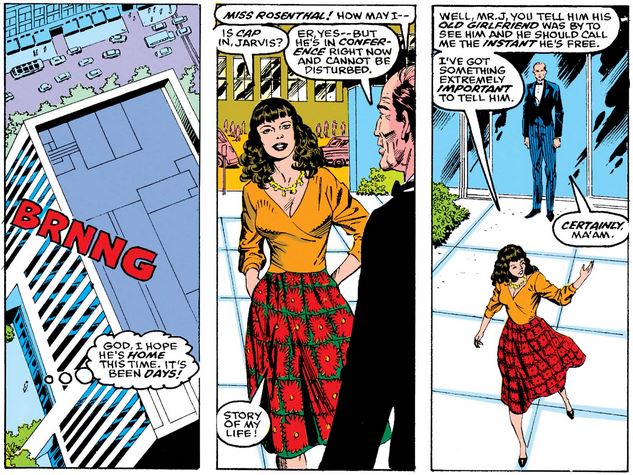 “In conference”… nice one, Jarvis!

Cap asks Jarvis to get Rachel settled in a guest room in Avengers Headquarters, and before Fabian can bend his ear about a new project, he gets a call through Peggy from a Hauptmann Deutschland.

As we often did in the before-times, Cap answers the “unknown caller,” who asks him about the episode with Red Skull recounted earlier before realizing that was not the real Cap and oh gosh how embarrassing for him.

En route to Washington, Cap thinks through the events so far, confirming that there seems to be no record of Hauptmann Deutschland… 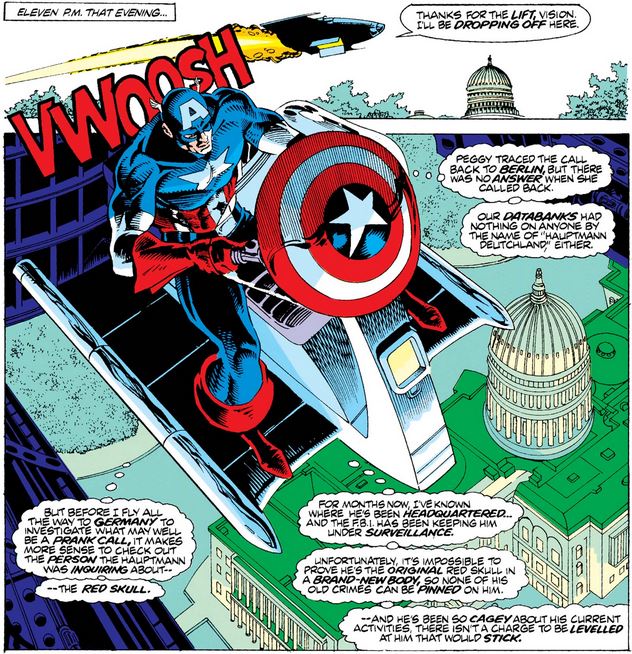 …before he mulls the ethical complexities of busting into the Red Skull’s current base of operations. (And I guess Fabian had a chance to show Cap what he’d been working on after all.)

Before he settles his moral dilemma—hey, they’re not all life or death—Cap is startled by a bright light from above that provides some cover to Hauptmann Deutschland, who assumes this Cap is the fake he met earlier. (If he was embarrassed before… just wait!) 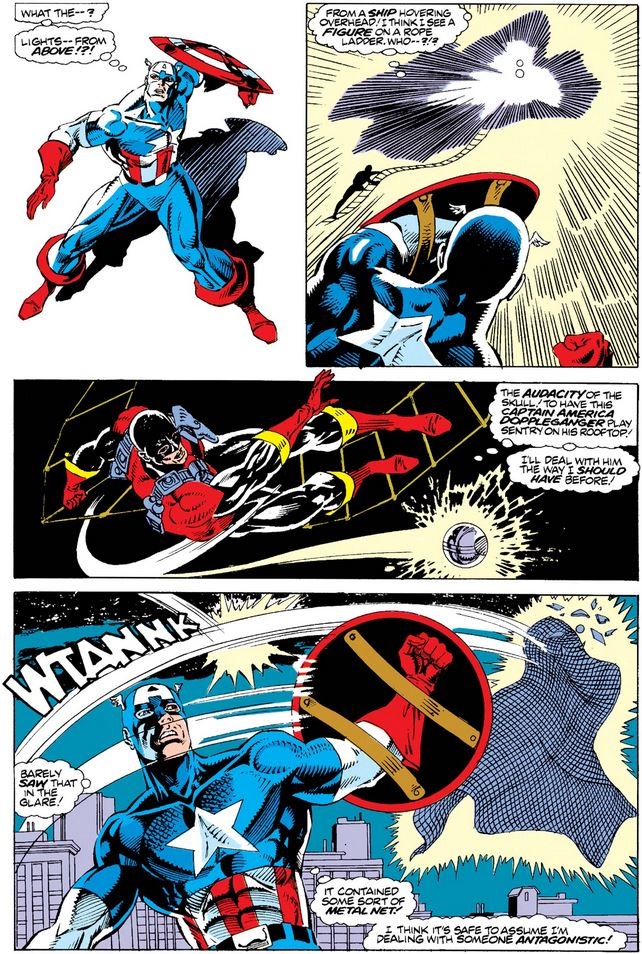 (Yes, I think that’s a safe assumption—I appreciate that Cap gives everyone the benefit of the doubt, but come on.) 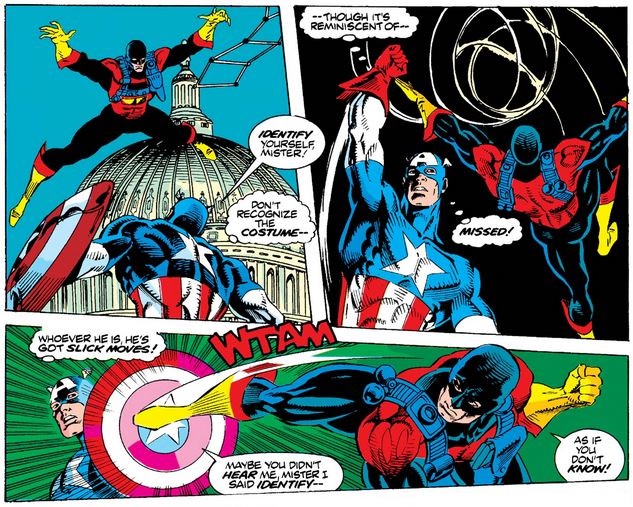 …although he already has it figured out. 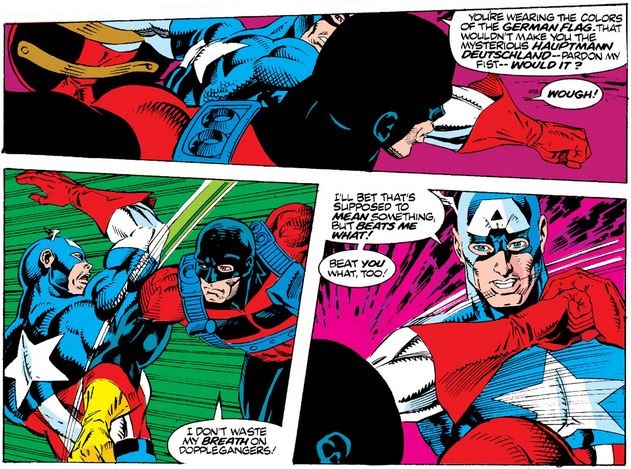 “Pardon my fist” was great, but “beat you what” just didn’t work for me.

Cap discovers that his German counterpart has powers, and we discover that he really wants to get the Red Skull this time. 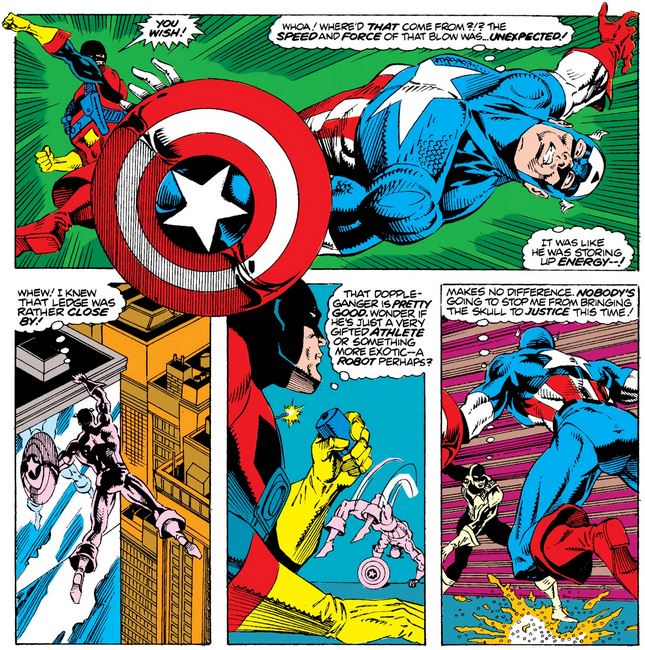 After Cap breaks Haupt’s weapons harness, he starts to adapt to the German’s abilities and fighting style, and eventually gets the upper hand… 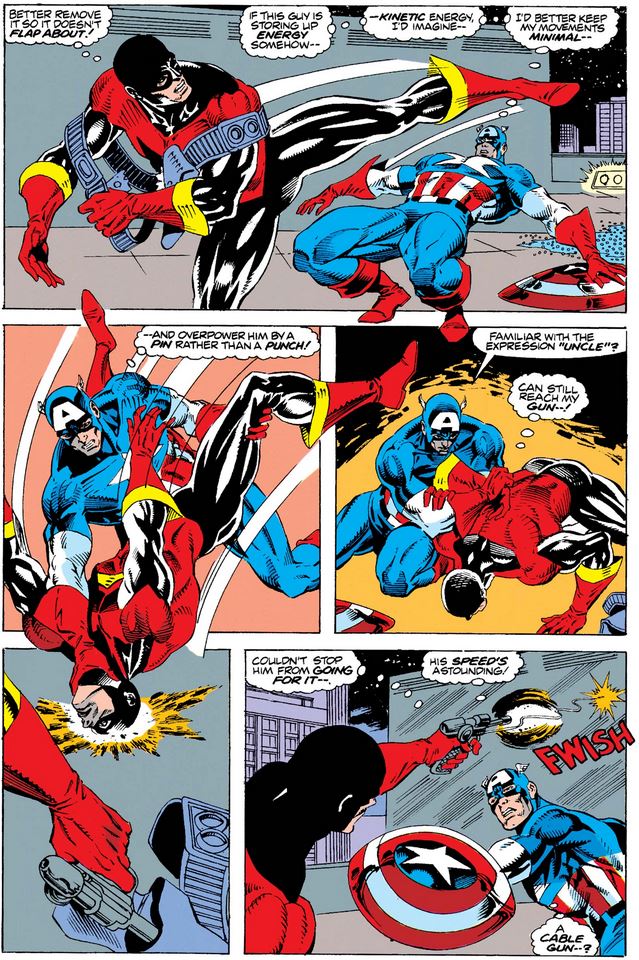 …until his foe changes focus and goes after the Red Skull. 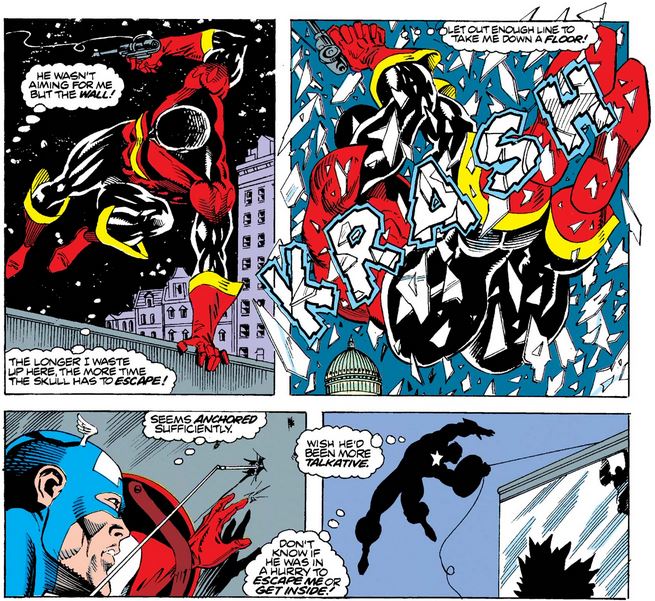 When Cap finds Hauptmann, they’re both in for a shock. 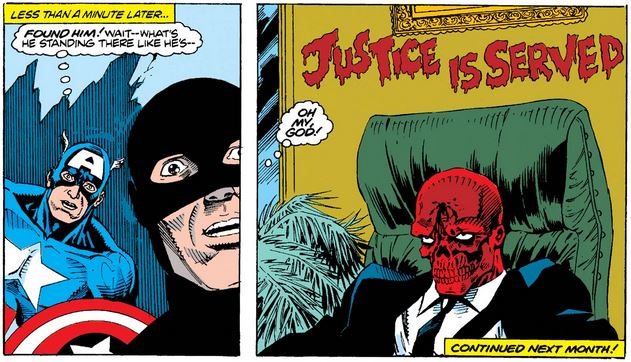 Gee, that message on the wall sounds familiar… make sure you come back for the next issue to see where this is going.