These two issues, guest-starring the New Warriors (including two future Avengers) and written by their regular scribe Fabian Nicieza, focus on Rage amidst heightened racial tensions in New York City, courtesy of the fella on the second cover, who adopts a familiar villain name (unfortunately well deserved). Also, we get a couple issues of Quasar’s book, curiously following up on a recent Alpha Flight story the Avengers were involved in, as well as a quick appearance of the Sentinel of Liberty in Amazing Spider-Man. (Get comfortable: This post is a little longer than most, all for the same low price!)

Avengers #341 begins with a news report of a fifteen-year-old boy named Carmello Martinez being beaten by several NYPD officers, which escalates racial tensions between the black and Latino communities, the police, and a small group of white racists. Rage confronts the last group, and after scaring them off, gives a nearby television reporter a piece of his mind about the local police. The reporter refers to him as the “Avengers’ spokesman,” as we see below when Peggy and Mike watch the report while Rage trains with Captain America and the Falcon in the gym. 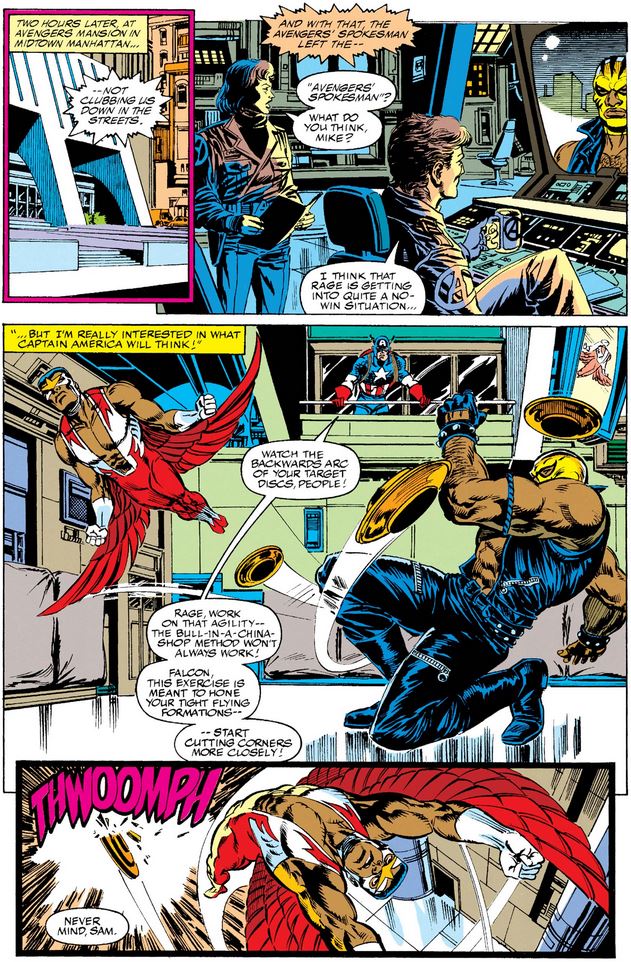 Rage gets enr… umm… frustrated and breaks the boys’ toys, forcing Cap to step in and fix things (getting a little workout himself).

Cap confronts Rage about his outburst, but the younger hero just wants to know why they’re not doing something about the clubbing, consistent with his complaints about the team’s focus when he first met Cap back in issue #326.

This time, Falcon delivers the company line, which might mean more given his background, but Rage couldn’t care less.

Sam doesn’t give up… 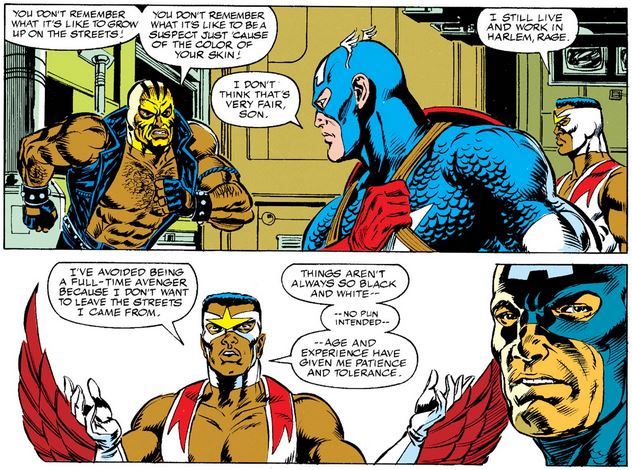 …but Rage is not satisfied with his calls for patience and tolerance, and storms off, leaving both Sam and Cap concerned. 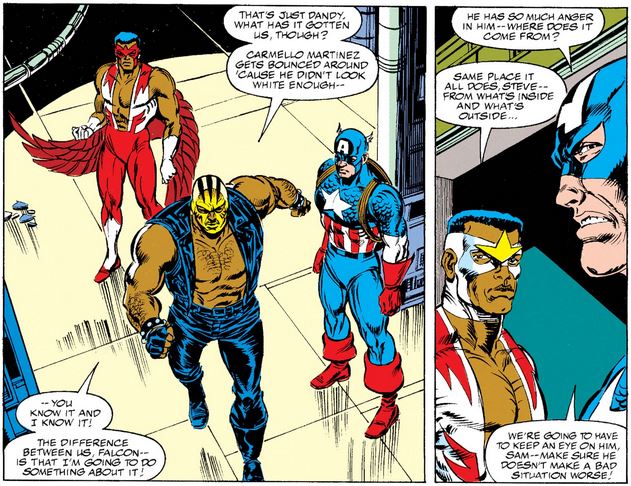 It is safe to assume that Cap is picking up on more anger than usual coming from Rage, to which he refers above, so later he and Sam pay a visit to Rage’s grandmother… 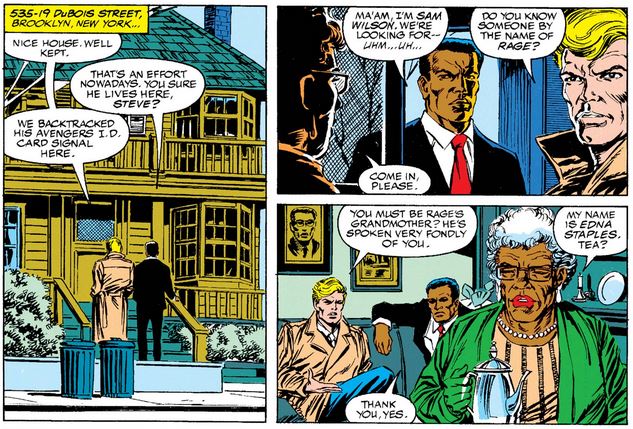 …who tells them that not only were Rage and Carmello good friends (explaining why he took the case so personally), but also that Rage is only fourteen years old (which they obviously did not know).

Later, the Sons of the Serpent, a white supremacist group first seen way back in issues #32-33, show up to contribute to the chaos, and are confronted by the New Warriors, soon joined by Rage. Soon, the heroes notice they are behaving more rashly and violently than normal, due to the fella below, a new Hate Monger…

…for whom the varsity team comes out to play. 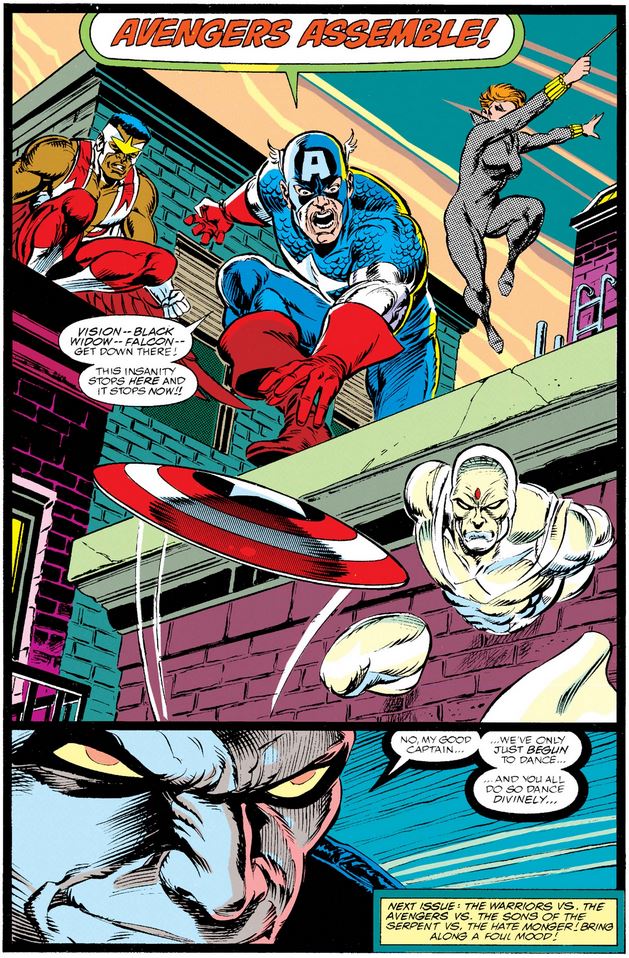 Avengers #342 opens up with a fine splash of Cap’s latest quartet, courtesy of Steve Epting and Tom Palmer, who will be the regular team on this book for the next three years.

The following double-spread is impressive as well…

…leading into a focus on Cap, who tries to calm down the police as well as Night Thrasher and then Marvel Boy, who is particularly conflicted, being one of Cap’s greatest admirers. 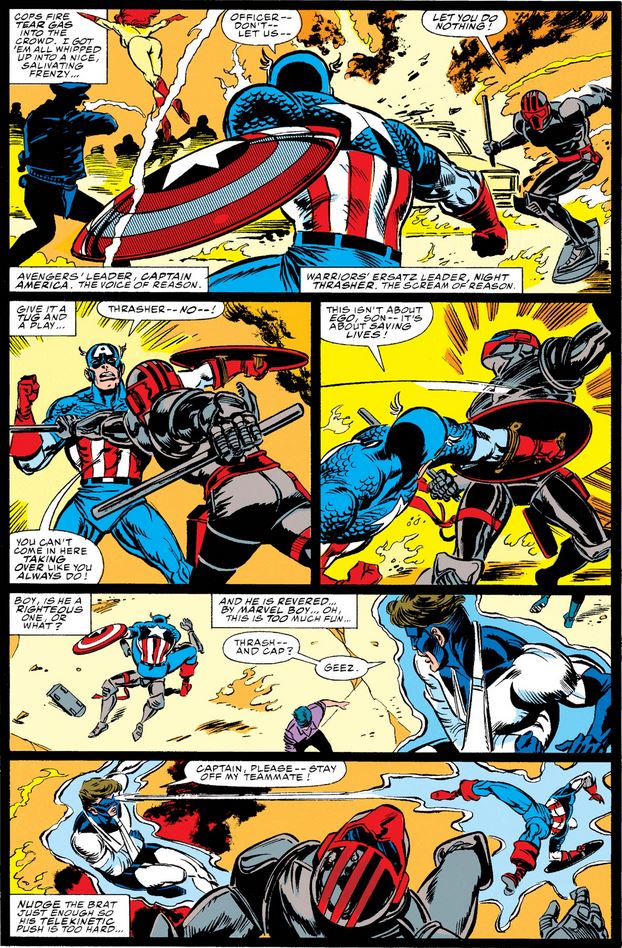 After the Sons of the Serpent are forced to retreat, the Hate Monger leaves as well, and the combatants on the ground start to come to their senses, realizing that something had taken them over… except for Rage, who thinks the aggression was perfectly justified (for obvious reasons).

As you may know, in a few years Marvel Boy (when he goes by Justice) and Firestar will be standing among Cap and the rest as fellow Avengers. (We’re getting there, just be patient!)

The assembled Avengers and New Warriors continue to debate the role of superheroes in addressing community unrest, with Cap and his teammates urging discretion and caution, especially if their presence could make a bad situation worse, while Night Thrasher agrees with Rage that they can’t just stand by “when things are going south.”

…leaving Cap to address the rest of the “kids,” praising their idealism while trying to bring it down to earth at the same time (which only sounds like defeatism to them, I’d imagine).

It doesn’t help that he pulls rank on behalf of the Avengers and basically sends the New Warriors home, and Marvel Boy has to prevent Night Thrasher from fighting with his idol any longer.

Well that’s settled, and I’m sure the New Warriors will never cause any problems again, nor will Cap ever have cause again to lecture young heroes about their lack of experience.

After the New Warriors chase after Rage, the Avengers figure out where the Sons of the Serpent are heading and wait for them there. 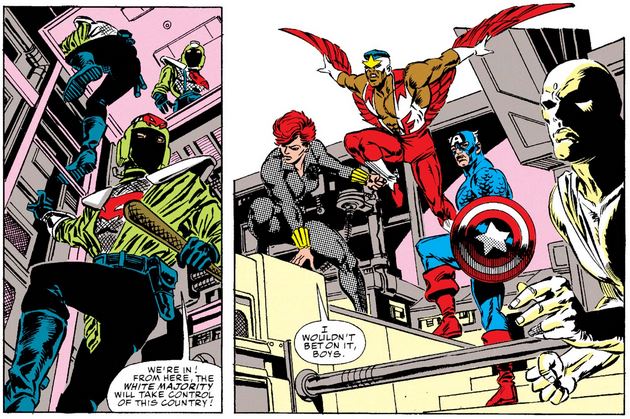 While Sam dismisses a racial epithet from one of the white supremacists, another writes off Cap as a traitor to his race.

After finishing the Sons of the Serpent off, Black Widow and Vision both joke about how easy it was, but Cap stresses it’s better to cut them off now before their movement grows larger… 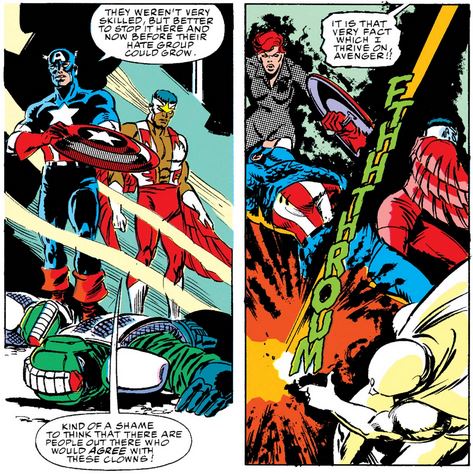 …which is clearly in the reappeared Hate Monger’s interest.

Before the Avengers can engage, the New Warriors and Rage show up; Hate Monger tries to defeat them with blasts of hate (don’t ask me how that works), but Rage has “more than enough hate of my own” to fight him with, which Hate Monger thinks make them friends. Rage disagrees, but it takes Cap’s pleas to make him realize he’s only playing into the Hate Monger’s hands. 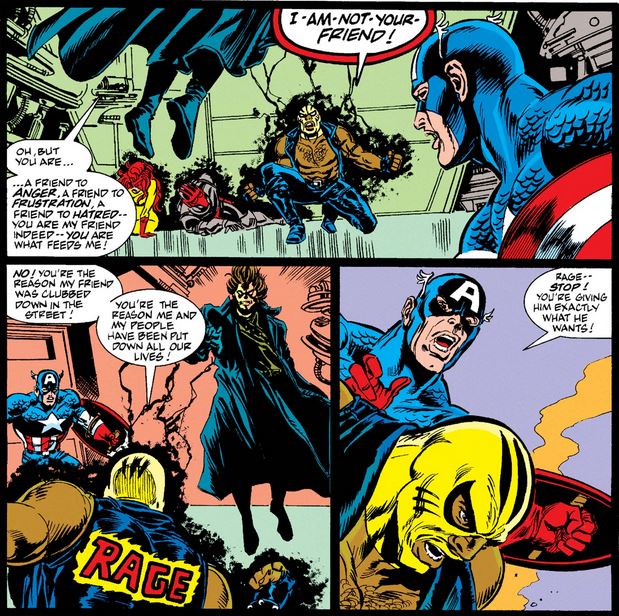 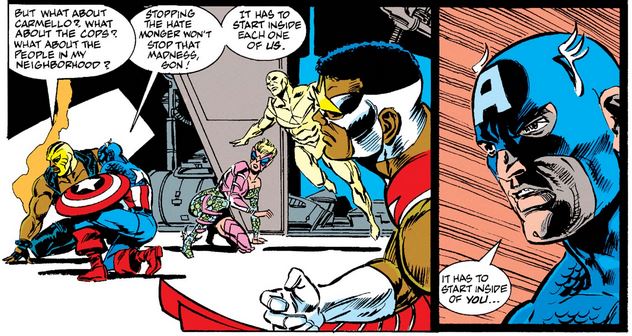 …which Rage accepts, but about which the Hate Monger is more skeptical (of course). 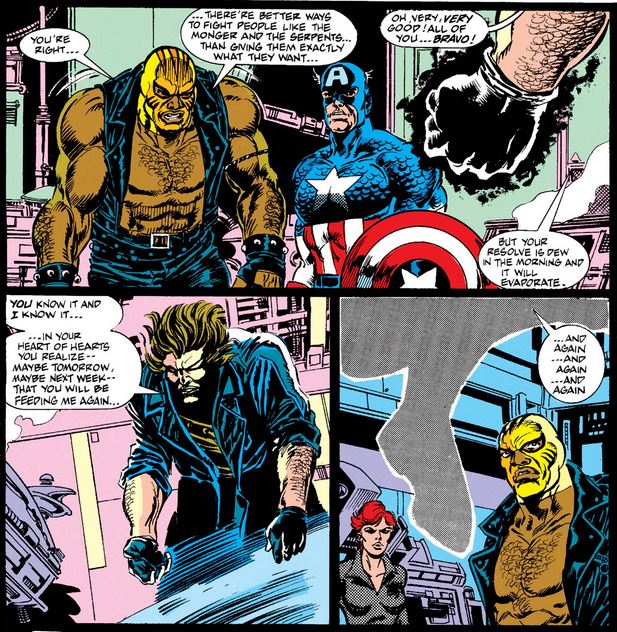 Cap praises Rage for controlling his negative feelings, then not-so-subtly refers to his age. (I suspect there’s a mistake in the text: I think time is something he has plenty of, due to his youth.)

Rage admits to being a teen (and a young one at that), and Cap admits to neglecting his responsibility to help train the next generation of heroes (referring to his earlier dismissal of Marvel Boy in New Warriors #1).

As they all go their separate ways, Night Thrasher gives Rage his card, setting the stage for Rage to join the New Warriors in their own issue #22.

Meanwhile, over in Quasar #28, “Her” has returned—the same “Her” who made the grammar a mess in the post on Alpha Flight #99-100—but first, we get a different view of the scene from Captain America #395, after Thor has his meeting in the principal’s office, and Quasar is not pleased to follow him.

You think I’m joking? It’s like a scene from “Saved by the Bell,” starring Cap as Principal Belding, Quasar as Zack Morris, and Hercules as A.C. Slater.

The intruder is Her, whom Quasar recognizes, but she’s here for someone else…

…at least at first. We soon learn that Her is searching for a mate, and attaches reproductive pods to the backs of several male heroes to see who is worthy of the role. (Dating was very weird in the 1990s.)

This situation naturally invites a wide range of guest-stars, including Squadron Supreme member Hyperion, introduced in Avengers #85, whom we see in Quasar #29 as Cap checks in with the title hero to let him know of more “candidates” chosen by Her.

She has auditioned Wonder Man and Leonard Samson, whom Cap redundantly introduces to each other…

…before Hyperion arrives, announced with a clever nod to his Kryptonian inspiration, before Cap clarifies whether he is a good Hyperion or a bad Hyperion. (There are any number of both, so you can never be too careful.)

Cap calls in Avengers medic Keith Kincaid to try to get the pod off Simon, while Samson uses his training and experience as a licensed therapist to come to a brilliant insight about Hercules.

Finally, in Amazing Spider-Man #354, the webhead uses his Avengers status to try to get in touch with Moon Knight…

…and Captain Belding indulges him, even though he could have done it himself. (A good principal is also a teacher.) 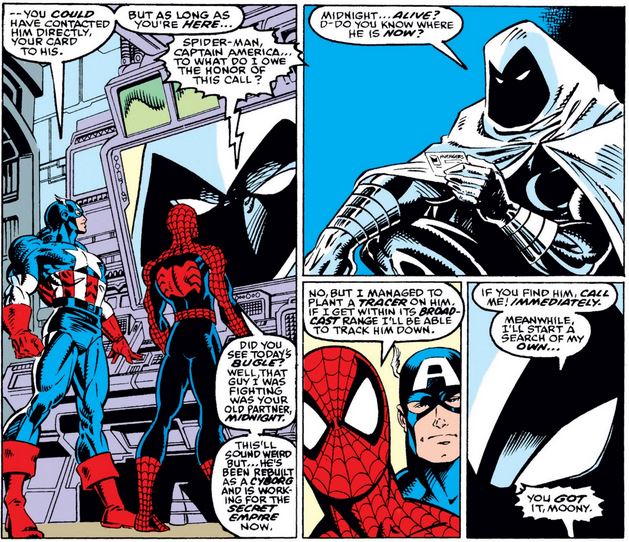 Hearing Spidey mention the Secret Empire must have brought back some memories for our hero!