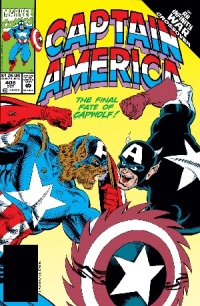 This issue serves several functions: It provides the aftermath to the “Man-Wolf” storyline that began in issue #402, resolving the entire Capwolf fiasco; it wraps up one of Cap’s missing-person cases; it is the title’s sole “Infinity War” tie-in (thankfully); and it reunites former partners as it sets up the next storyline. (And that’s not even counting the short Diamondback story, in which Cap does not appear.)

The first story opens with a useful recap, with particular focus on Moonhunter (the fella in white), who worked for the villain of the Man-Wolf story, Dredmund (whom Cap is carrying), before Doctor Druid released him from Dredmund’s mind control of villain Dredmund, as well as the white werewolf currently on Nightshades’s table. 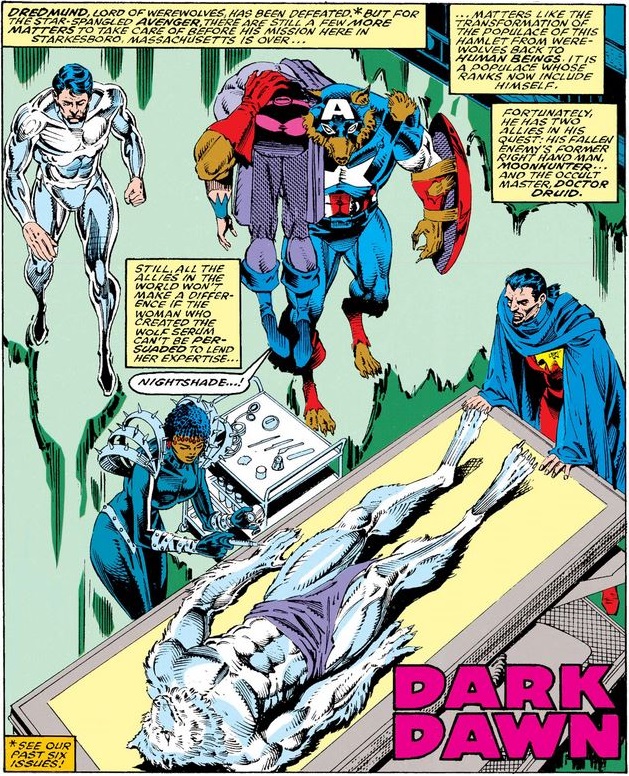 Cap gets an update from Doctor Druid, whose throat was slashed by Dredmund in issue #406—and who seems to have healing powers that even Wolverine would envy. But it is the “white wolf” (not this White Wolf) who deserves our attention and Cap’s… 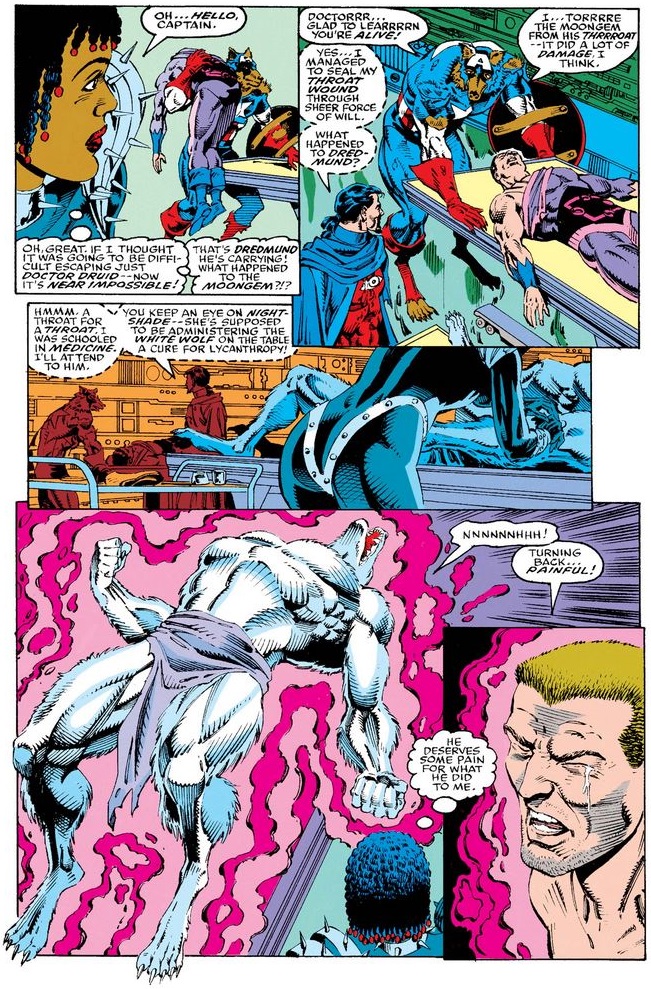 …because, surprise, it’s the guy Cap was searching for this entire time, and also the werewolf Cap fought before he helped rally the other werewolves to Cap’s cause when they fought back against Dredmund, Nightshade, and Moonhunter in the last few issues. 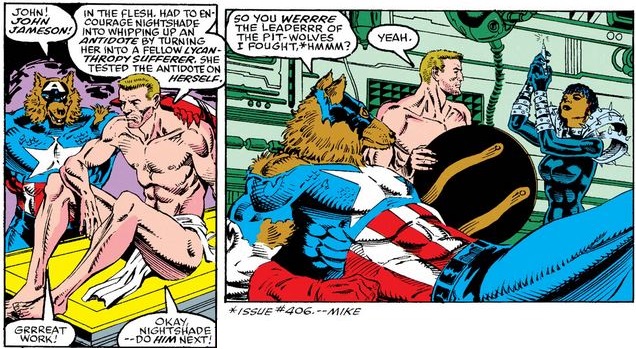 Before Nightshade can administer the antidote to Cap, though, a new player enters the game: an evil duplicate of Cap, courtesy of the Magus from Infinity War. 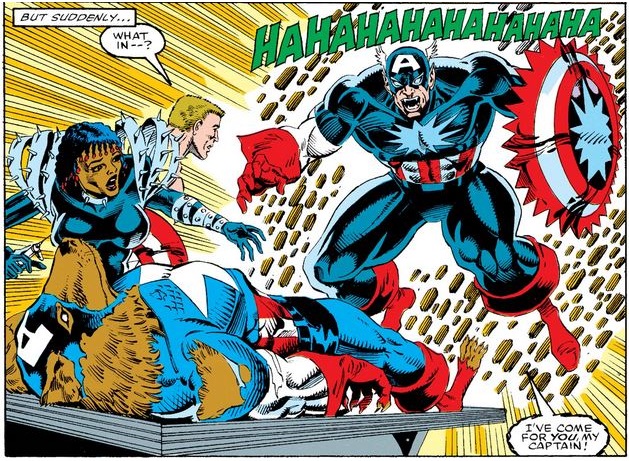 Of course, Cap has yet to get involved in that story, so he is as clueless about this new foe’s identity as the rest are. Luckily, though, Nightshade manages to jab Cap with the needle, so while he tries to figure out what’s going on, he begins to revert to normal (if by “normal” you mean “human physical perfection”). 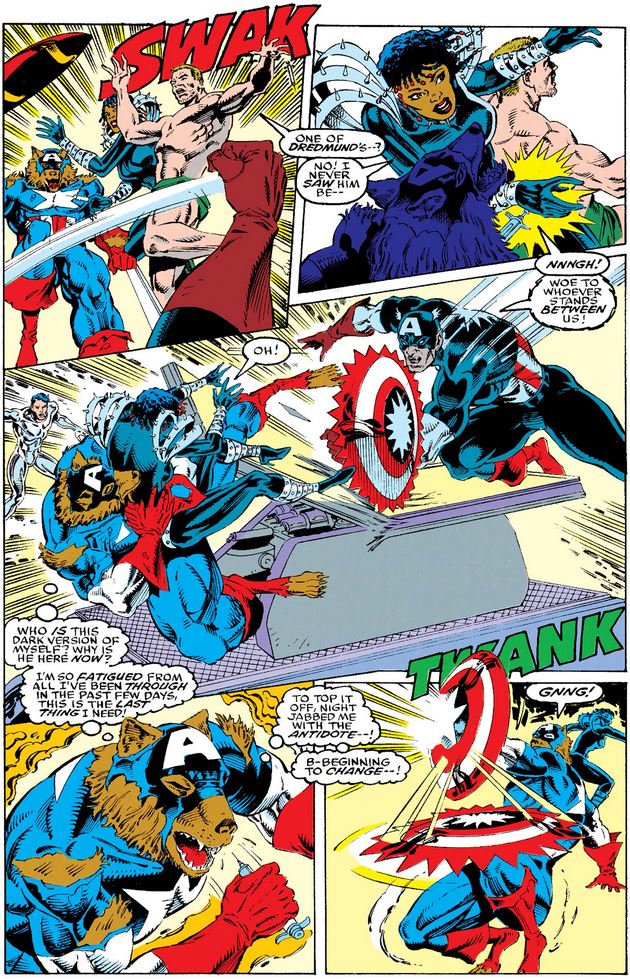 Once Doctor Druid confirms the fake Cap is not alive in any meaningful sense, Cap takes the opportunity and summons up one massive exertion of force to thrust his doppelgänger into his own shield (stuck in the wall after its last toss above). 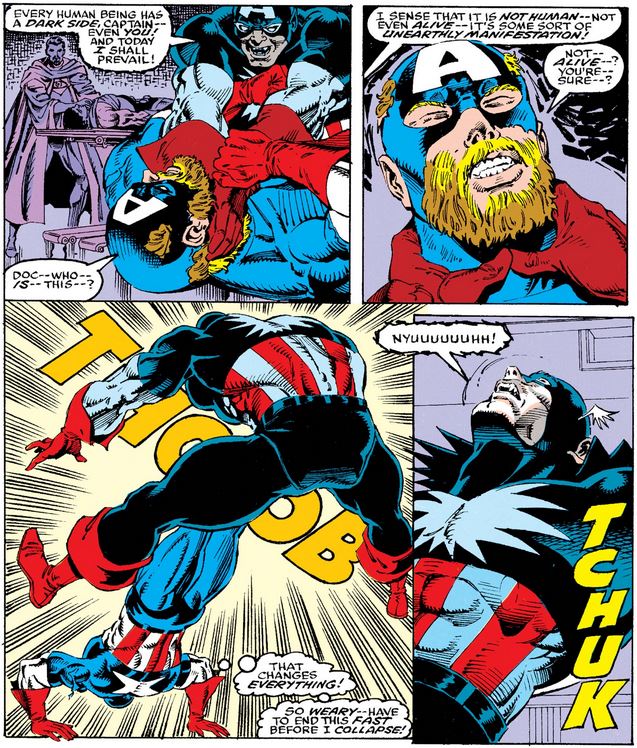 The fake Cap dissolves—as does the real Cap’s beard, the last remnant of his time as a wolf. (That does not explain this, however.) 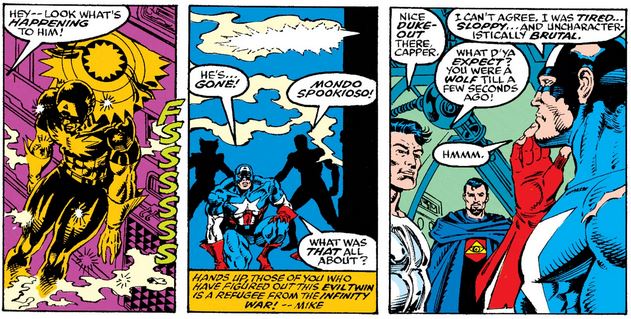 Cap checks with Doctor Druid to make sure that heroes Jack Russell and Wolfsbane—the two werewolves not created by Dredmund—are not taken away for treatment, and then reminds Nightshade of the virtues of the legal system. 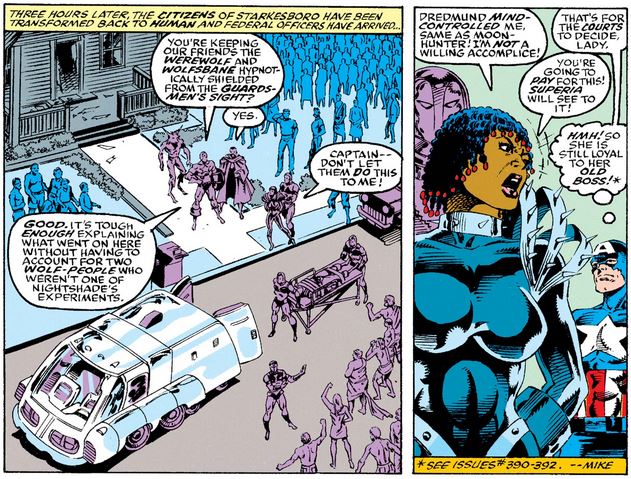 Cap also emphasizes legal procedures when talking to the Naked Mayor about the werewolf murders that first attracted him and Doctor Druid to the town of Starkesboro. Then he checks in with Jack Russell… 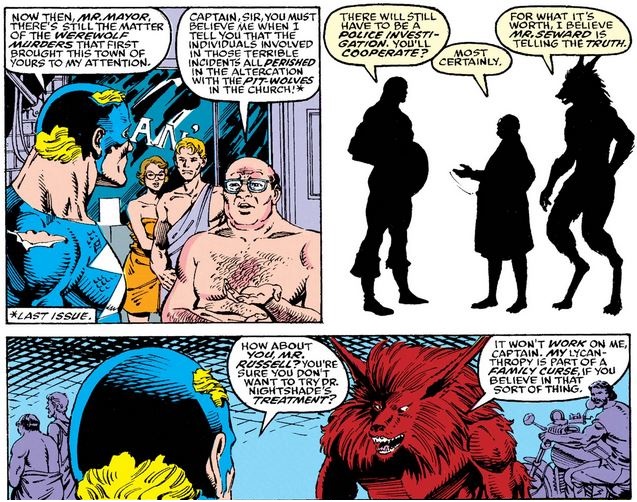 …and the mutant Wolfsbane, before turning to John Jameson himself. (It’s notable that Cap checks in on all these people himself, feeling a sense of responsibility for all of them.)

John does most of the talking below, resigning as the Avengers’ pilot before admitting to a severe case if “superhero envy” as a former astronaut now outshined by Avengers left and right, and then explaining how he got mixed up with Dredmund in the first place. Cap listens, and then assures John he’s still a hero who’s always welcome back to the cockpit of the Quinjet. 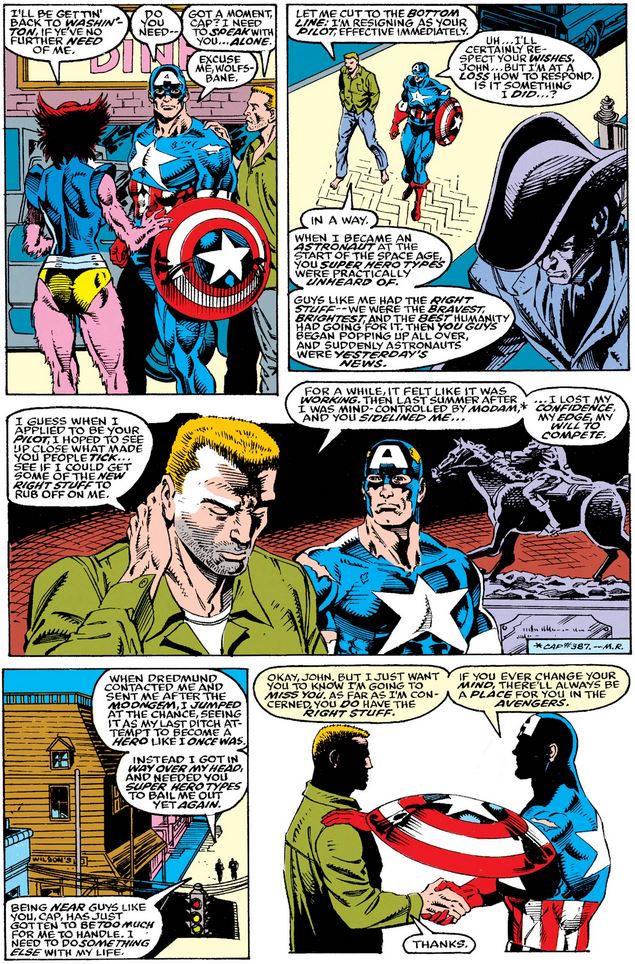 Finally, Moonhunter—who wants be called Zack now—gives Cap and Doctor Druid a ride back to Avengers Mansion on his beat-up skycycle, and Dennis Dunphy, sitting next to a pond in Central Lake after Bernie Rosenthal lost him in issue #405, is attacked by Magus’s duplicate D-Man and dragged underwater, not to be seen again until issue #418 (except for sporadic glimpses not covered here).

After a short Diamondback story—in which Rachel is reunited with her brother, now the criminal Cutthroat, before Crossbones kills him (in a way that’s a bit on the nose)—we get a third story focusing on Falcon, including a new flight-suit he gets in Captain America Annual #11 (also out this month). 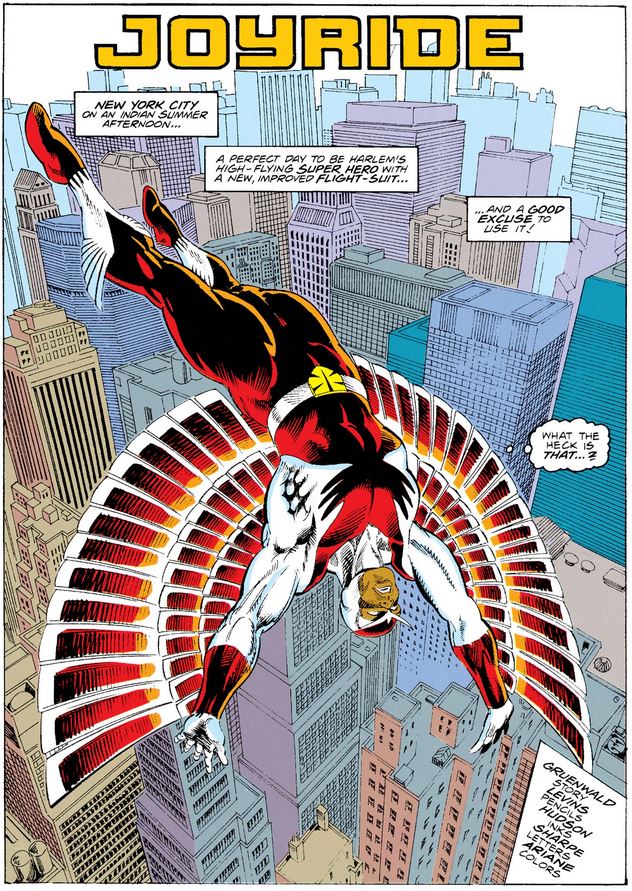 Turns out the person Sam sees is none other than Zack Moonhunter, flying an Avengers skycycle, and learns that he has applied to replace John Jameson as the Avengers’ pilot.

Next, Sam finds Cap and Black Widow catching up on recent events (and Cap’s continued reticence to end his leave of absence from the Avengers). We also learn that some time has passed since Cap returned from Starkesboro, as both the “Infinity War” and “Citizen Kang” storylines took place since then. 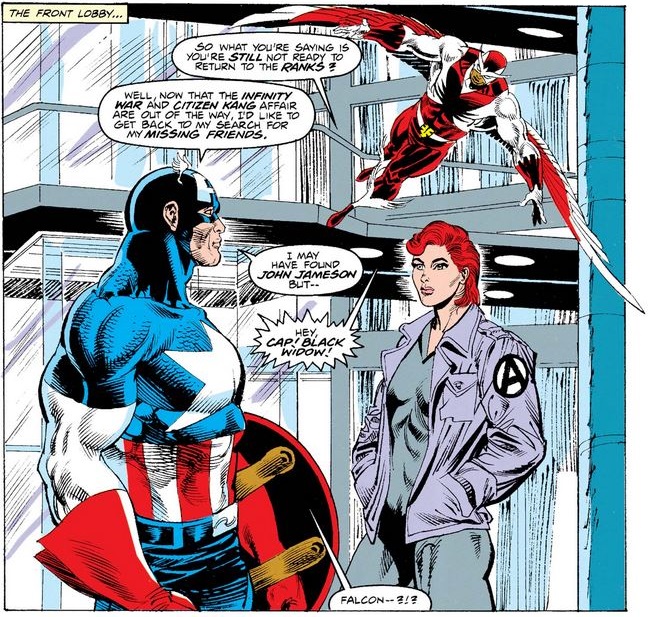 After Tim Gunn gives his seal of approval regarding Sam’s new suit, Black Widow gets down to business…

…and afterwards, Sam offers to help Cap find Rachel and Dennis. (He really needs to keep better track of his friends.) 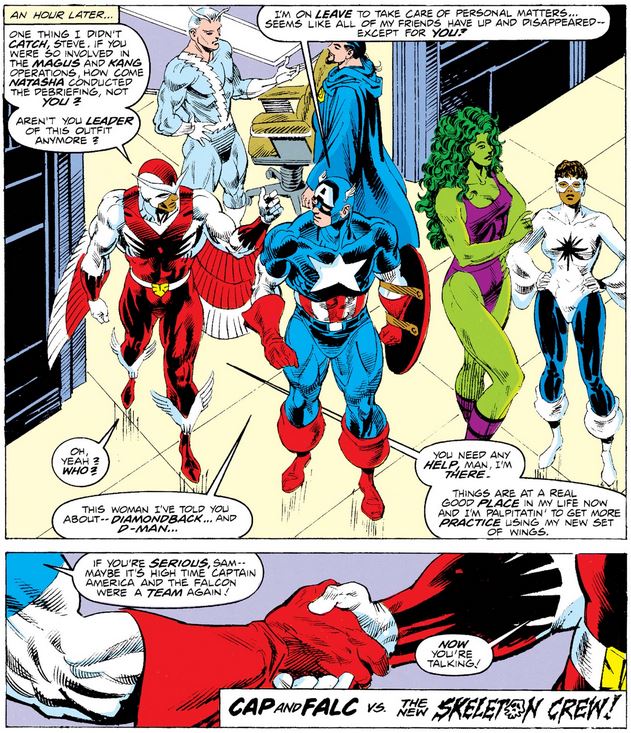 So the team of Captain America and the Falcon is back together and on the search for Rachel (at least) starting in the next issue. (“Friends will be searched for in the order in which they disappeared”… sorry, Dennis, I don’t make the rules.)