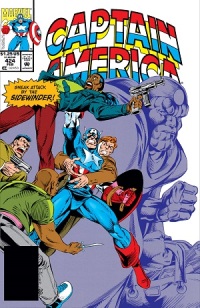 This is the last issue of Captain America before the game-changing “Fighting Chance” storyline begins, and it sees our hero reunite with Diamondback at long last… as well as one of her former Serpent Society colleagues, in a story that reminds me of classic Spider-Man tales in which a member of his rogues gallery is revealed to be a real person with feelings after all.

The reunion begins on the first page (amidst much text, alas).

For the record, Tom DeFalco was the first comics professional I met—and the only one, as of the time of writing, with whom I’ve ridden in a limo—but I do not recall whether or not he is indeed a hugger (on high, low, or in between).

Cap and Rachel catch up: He expresses regret over leaving her in Wakanda (as he thought to himself in issue #422), and she reminds him that she has super-soldier serum in her blood (since issues #409-410), before he tells her that he’s moving to Brooklyn (also as of issue #422). 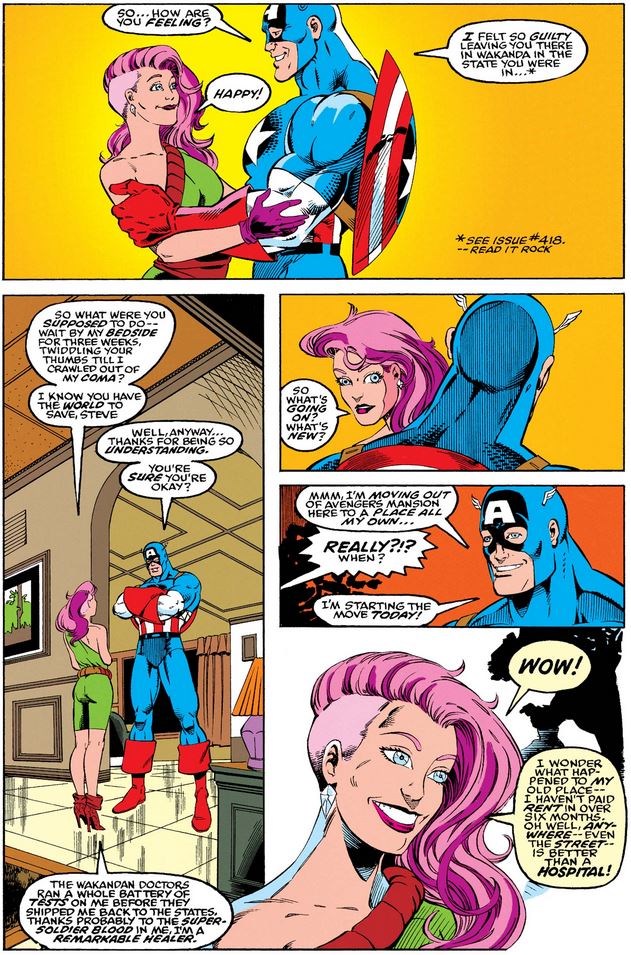 As he packs much more clothes than he ever had a chance to wear or buy, Cap thinks about how he has rarely felt at home anywhere, and wonders if he’s too preoccupied with high concepts to appreciate the simple pleasures. (Maybe he is a philosopher after all!) But these thoughts are interrupted by the Black Widow, who tries (a little bit) to talk Cap out of leaving, and gets a “thanks mom” in return for her trouble.

Once Cap makes it down to Fabian’s lab, Peggy alerts him of a call from the villain Sidewinder, who needs his help.

Naturally, Rachel wants to come along, but first Cap wants to know more about her erratic behavior on recent missions (due to her guilt about murdering Snapdragon in issue #413, which she hasn’t told him about yet).

Cap is still thinking about Rachel’s evasion when Sidewinder arrives and generously plays along with Cap’s “disguise” (like telling small children their Halloween costumes are “so scary”).

Sidewinder explains his problem to Cap, based on scenes involving his young daughter Amelia from earlier in the issue (not shown here).

Sidewinder is referring to the universal health care package that Hillary Clinton spearheaded early in her husband Bill’s first term as U.S. president, which was under discussion for most of 1994 (see here for more).

After Cap says he cannot (or will not) get him the money, Sidewinder threatens to commit crimes instead, and argues that Cap will be responsible for them. This, of course, is ridiculous: It was Sidewinder’s choice to make the extortionary threat (“give me $250,000 or I’ll commit crimes”) and also his choice to follow through with it, not Cap’s.

Sidewinder uses his daughter’s plight to make Cap feel guilty before transporting away, after which Cap asks Rachel to verify his story, ironically using a similar ploy to try to get her to reveal confidential secrets about her former friend.

The discussion continues back at the ranch, revealing that Rachel is concerned not just about betraying Sidewinder’s trust, but also landing him in jail—and I doubt Cap’s clarification did much to put her mind at ease regarding that.

Somehow, Cap learns where Sidewinder’s daughter is and shows up at her hospital room… or, at least, someone does, who can be sure? <comic exaggerated wink>

Oh no, the illness must have affected Amelia’s eyesight—or else she’s just as generous as her father regarding laughable attempts to travel incognito.

Finally convinced of the truth of Sidewinder’s story, Cap wants to help, but Sidewinder’s ex-wife suspects his true motives, and clearly knows what side her bread is buttered on (wherever that butter should come from).

Rachel (the voice on the other “end” of Cap’s Avengers card) takes him to where Sidewinder was trying to steal money from drug dealers, and they arrive to find the villain transporting repeatedly (which he does when injured).

Sure, Rachel may exaggerate the effect of the diluted super-soldier serum in her system just a bit, but I’m more amused by the similarity of their entrance above to this famous panel from March 1987’s Batman #405 by Frank Miller, David Mazzucchelli, and Richmond Lewis:

As he and Rachel engage with the drug dealers, Cap executes an impressive kick…

…followed by a stern lecture about true strength of mind, body, and character, even while he doubts it will do any good.

As more thugs arrive, Cap starts to feel the sudden exhaustion he first experienced in issue #422, and is mindful not to let it show to his opponents. 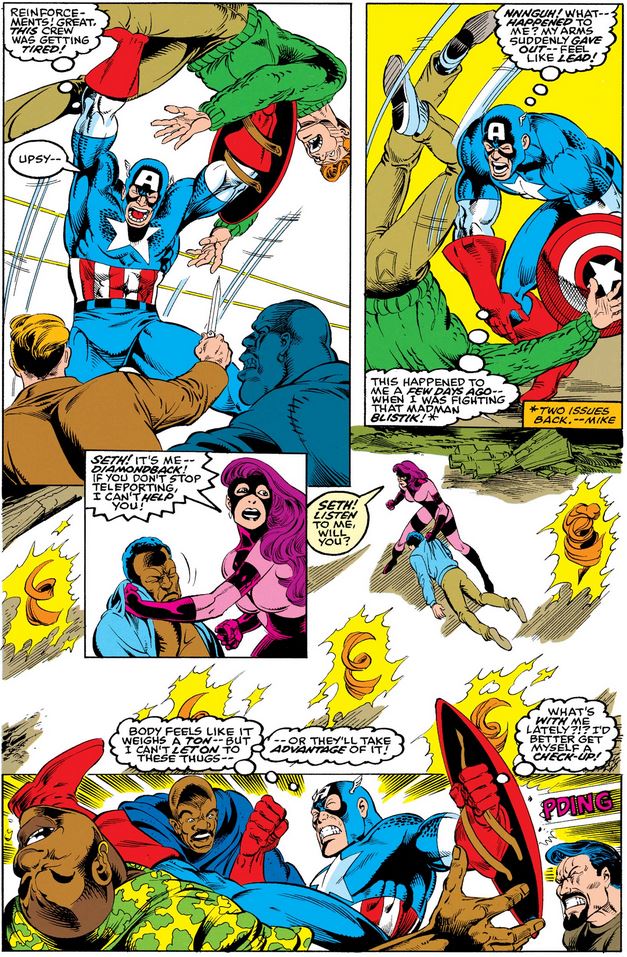 Nonetheless, Cap manages to take care of the drug dealers before he joins Rachel and Sidewinder to make an offer that would save Amelia, satisfy Cap’s thirst for justice—and allow the villain to redeem himself (at least partially).

Cap seems to be showboating a little as he leads Sidewinder out of the building before dangling the possibility of an acquittal in front of him—but most important, he promises to fund Amelia’s care.

I hope Cap meant to say below that he’d hit up his wealthy friends—although, if he’s thinking of Tony Stark, it might very well have been a Freudian slip. After he corrects her again on his role in the law enforcement process, Rachel decides to come clean regarding her earlier actions…

…which she does, to the reader more than to Cap (and very quietly at the end).

To Cap’s dismay, Rachel was not using poetic license when she admitted to killing Snapdragon.

Cap surprises her when he promises to support her and refuses to judge her actions, holding her character in high esteem and implicitly acknowledging that good people do bad things from time to time. (After all, he is still friends with Tony.) 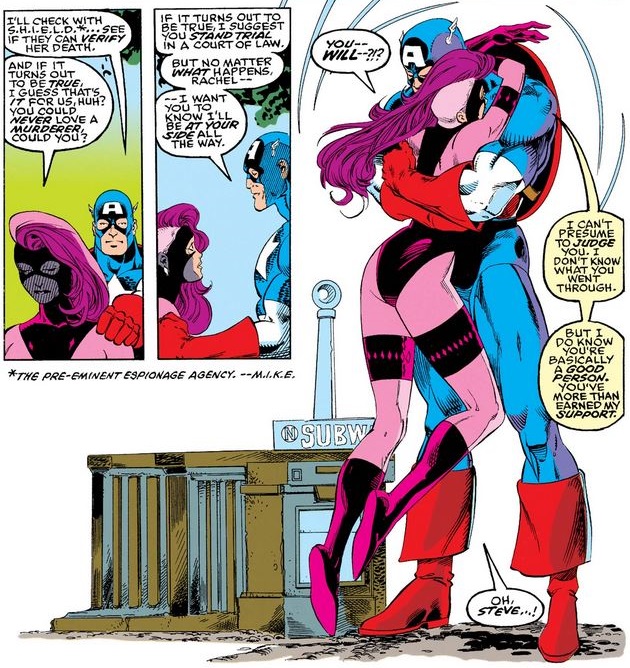 Our story ends of a heartwarming note as Cap visits Amelia’s hospital room weeks later—out of disguise, even—so she can video-chat with her dad, to whom she is just as forgiving as Cap was to Rachel. 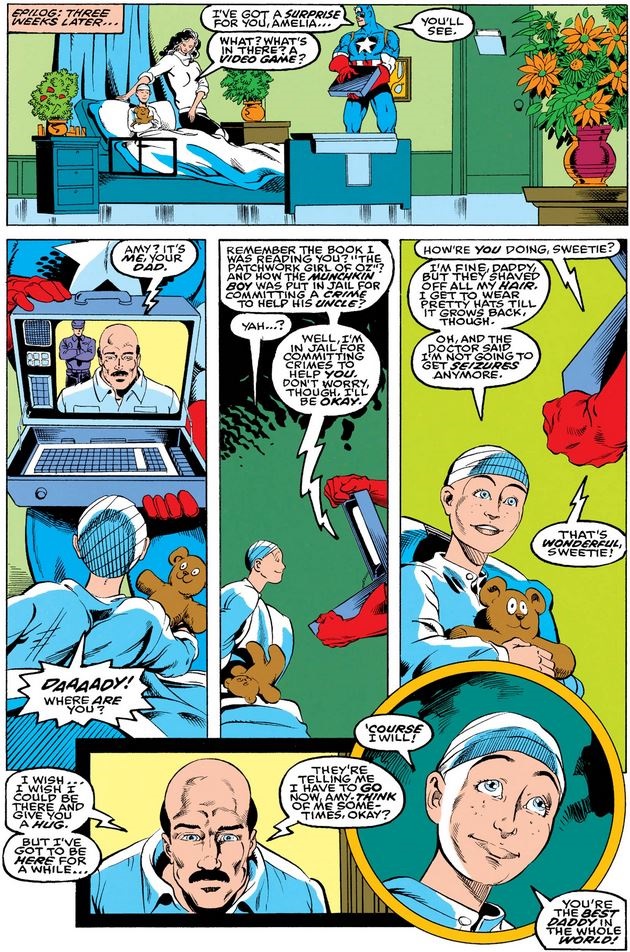 Starting in the next issue, the “Fighting Chance” storyline explores the truth behind Cap’s recent “episodes,” leading to a significant status quo change as Mark Gruenwald’s epic run hurtles towards its stunning conclusion. (Maybe I’ve read too much promotional hype over the years.)