This issue is the first of Steve Englehart’s final story, taking up his last three issues on Captain America, after a run that took the title to a higher level in terms of ethical substance (and sales). It features Cap and Falcon facing off against the Red Skull, allows Cap to get off his chest a lot of the issues built up in the “Secret Empire” and “Nomad” storylines, and beginning in the next issue, reveals some secrets about Sam Wilson.

In the case you missed the end of the last issue…

While searching for the Red Skull, the narration draws an analogy between Cap’s own identity problems and a famous parable from the Taoist philosopher Chuang-Tzu. 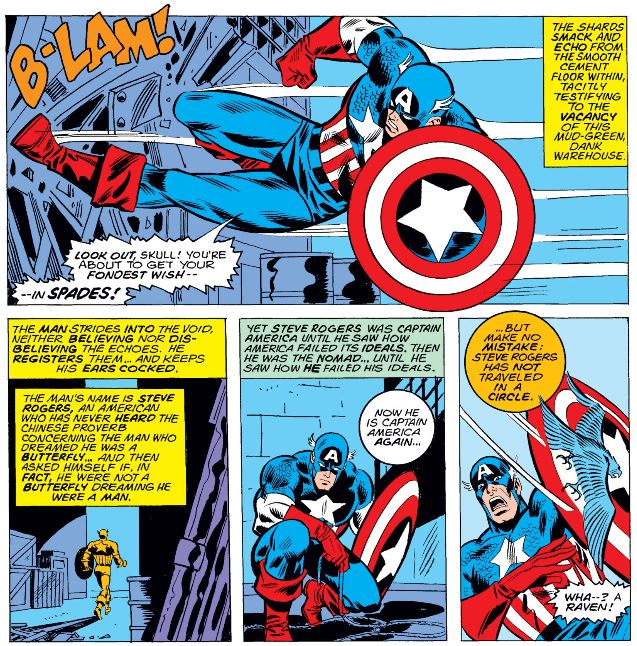 Although I think Englehart was thinking of Cap’s temporary abandonment of his star-spangled identity for that of Nomad, I think the parable applies more to his persistent issues about the line between Cap and Steve Rogers and which he “really” is—in other words, is Steve Rogers imagining being Captain America or the other way around? (A certain caped crusader knows this question very well and confronts it even more often.)

Cap doesn’t find the Skull in person, but he did Skype in, and he and the good Captain have some words, starting with freedom versus tyranny…

…and ending with Cap recounting just two of the lessons he learned over the last dozen or so issues: the true importance and essence of America, which he has sworn to protect, as well as the existence of threats from within as well as without, both of which he must stand ready to fight.

Englehart really nails it in the exposition in the first panel below: Cap follows principles “tempered on the forge of understanding, and honed to the edge of reality.” This stands in stark contrast to the common impression of his ethics as simplistic or “black-and-white”; although they do consist of simple principles of right and wrong, the application of these principles to real-world moral problems demands judgment that must always be sensitive to context (which was one of the central points of my book).

We have to appreciate the odd situation the appearance of television crews represents for Cap. The press was complicit in, if not responsible for, his problems during the Secret Empire’s campaign, but they can also help him regain his reputation and maintain his standing with the American people, regardless of his discomfort with it—and he may able to use his fame and the good publicity it can generate for good. 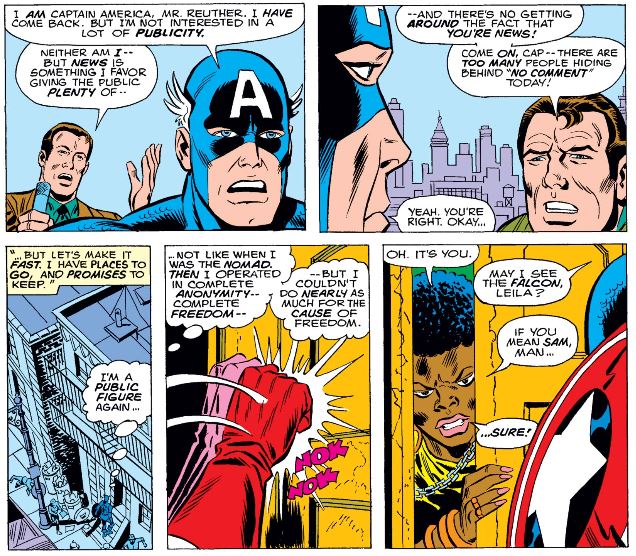 Unfortunately he don’t find out what he says, and anyway there is a more important matter to attend to: his friend.

Like the heroes they are, both Cap and Sam take responsibility for their actions and acknowledge their mistakes… but Leila doesn’t want to let Sam make another one! 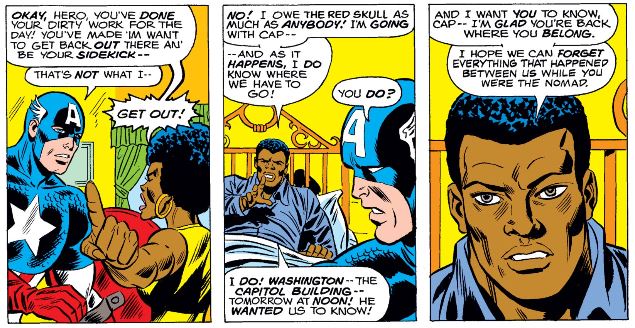 Sam makes clear to Leila that he’s not joining Cap just as his sidekick, but he’s going after the Red Skull for his own reasons… and makes clear to Cap that he hasn’t forgotten the tensions between them while Cap was Nomad, even if he is willing to set them aside.

Cap thinks about this as well as Sam’s implication about the Nomad period, which Cap remembers as difficult but valuable in that it opened his eyes to the realities around him and his true purpose as a hero as the Sentinel of Liberty. 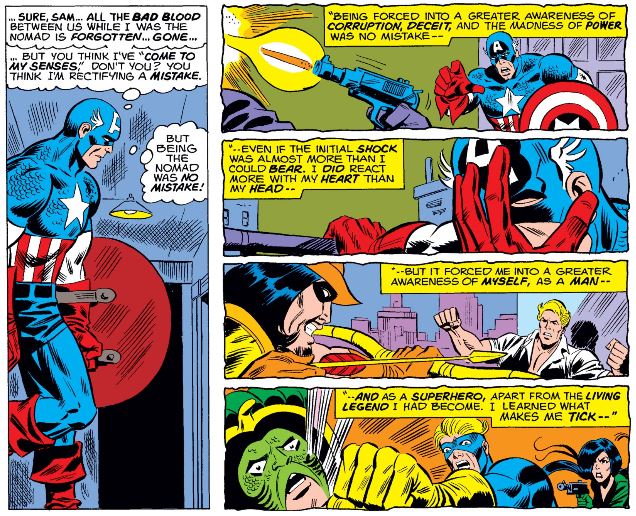 Below we see evidence of the effect of Cap’s retirement on the American people: a symbol “denied them,” their rock in a political and social hurricane.

I trust I don’t need to point out the parallels to the current day, do I? Particularly with the various “takes” on Cap’s reappearance cited below, as well as the choice to ignore events (a choice, as many have pointed out, that is available only to some). 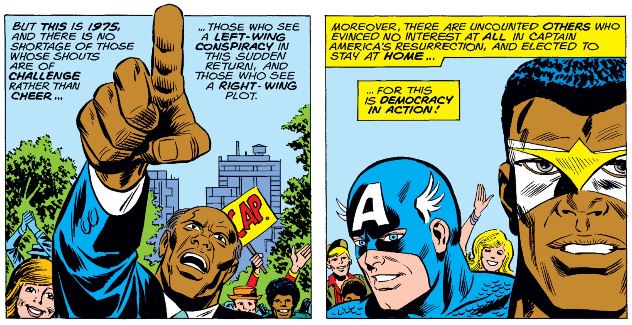 Soon, the Red Skull shows up and sprays killer red dust on Herbert Glass, a member of the Federal Open Market Committee (the arm of the Federal Reserve that meets regularly to determine monetary policy), and after fighting Cap and Sam, escapes after promising to kill more members, declaring his new war on America to be economic rather than military.

Below, Sam silently and succinctly acknowledges Cap’s rock-solid sense of purpose and also the need for judgment to determine how best to further it.

Cap may have patched up things with Sam, but there are still the Carters Sharon and Peggy, each of whom is a distinct matter Cap must resolve. First is Sharon, who’s been at the mansion since she followed Steve there several issues—she was upset that he deserted their civilian life together to become Nomad, and she is no happier now that he’s Cap once again.

Afterwards, Cap and Sam go to the second member of the FOMC targeted by the Red Skull to protect him, and who should show up but Peggy, accompanied by her S.H.I.E.L.D. partner Gabe Jones. 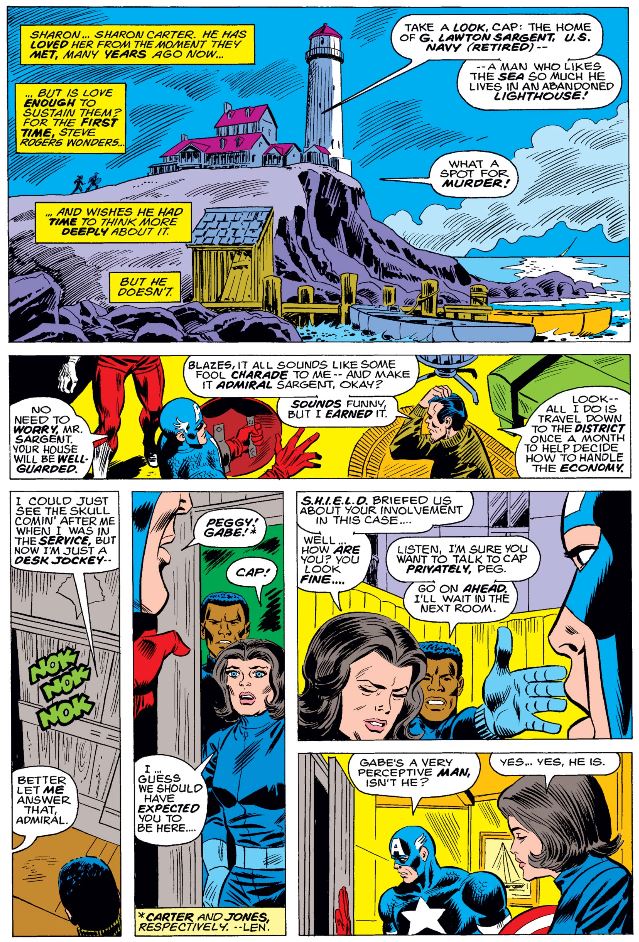 Cap rightfully apologizes for the shameful way he blew Peggy off in issue #179—without telling her about him and Sharon, though, assuming there still is a him and Sharon—and casually mentions what he and Sam have suspected about her and Gabe (about which we’ll see more soon).

Cap’s français parfait references their WWII time together in Paris, when she fought with the French resistance (as seen in Tales of Suspense #77, long before we even knew her name).

Of course, the Red Skull does show up and manages to kill the Admiral right under the heroes’ noses… but not until he takes on Peggy Carter herself, and learns a lesson about underestimating a woman.

Obviously, this story continues in the next issue (and post), where the focus turns to Sam and his true past.