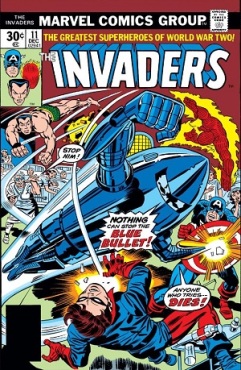 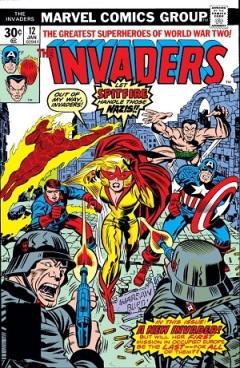 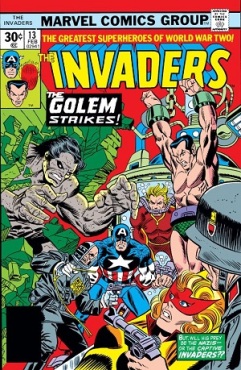 These three issues conclude the saga of the Fallsworths that began in issues #7-10, and brings the end of one superhero career and the start of a new one.

As issue #11 opens, the Invaders are rushing Lord Fallsworth and Jacqueline to the hospital, after the vampire Baron Blood smashed his legs and bit her (respectively). Because Lord Fallsworth was still in his Union Jack costume, Cap and Namor try to protect his secret identity while he undresses, which the nurse hilariously misunderstands.

Below we see a solemn Cap, watching the two Fallsworths being taken for treatment… the solemnity broken, unfortunately, by the exposition at the bottom.

As we saw in the last post, the Human Torch has become smitten with Jacqueline, but Cap only catches on now. 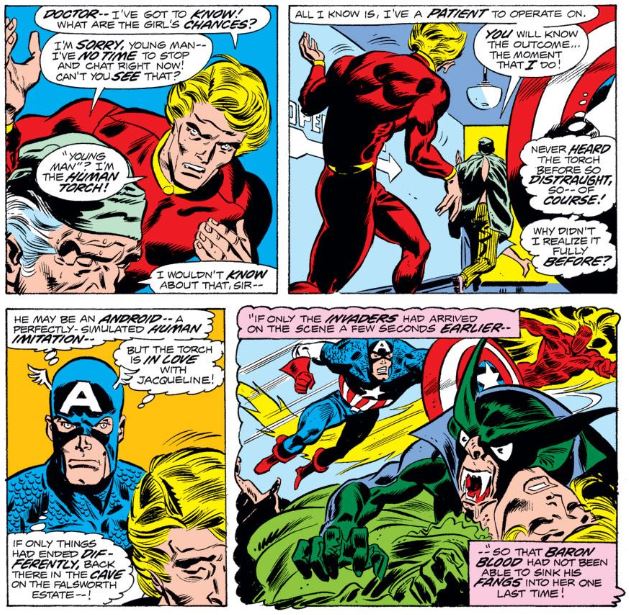 To his credit, Cap does not question his friend’s feelings, despite his synthetic nature, which foreshadows his ready acceptance of the Vision and Scarlet Witch’s love in his later Avengers days (shown here, for instance).

As the Invaders, in the hospital’s observation gallery, closely watch the doctors work, the Torch sees an opportunity to help Jacqueline in a way only a synthetic man could. 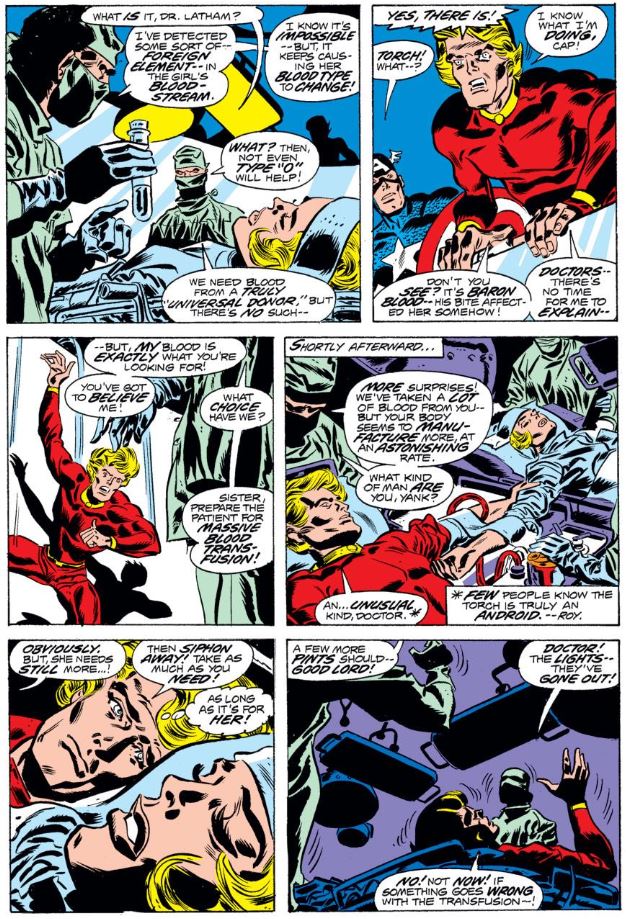 When the lights go out—we’ll see exactly why soon—Cap and Torch come up with a bright idea. (If he ever gives up the superheroing game, Cap can always do lighting for Hollywood.) 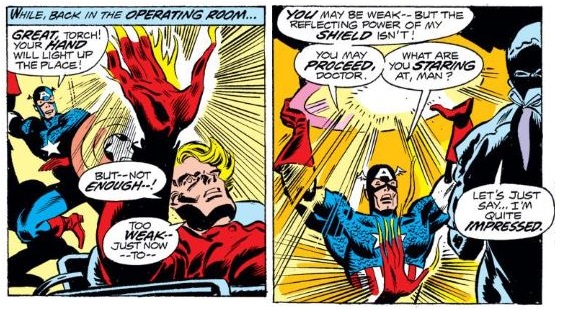 Is that a monkey’s paw in your pocket, Torch? Even though you saved Jacqueline, she doesn’t “see” you when she wakes up. 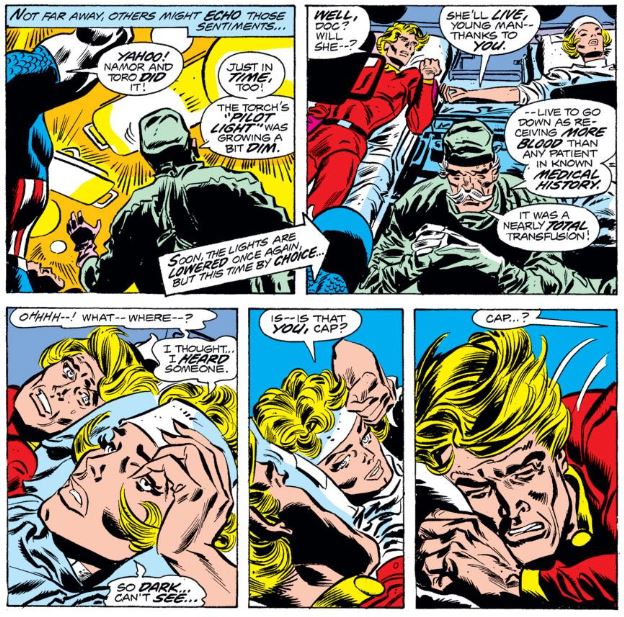 The Torch doesn’t have long to wallow, as the reason for the power outage bursts into the recovery room: the Blue Bullet, a weapon being developed for the British government by Professor Gold in the same hospital (naturally). On the bright side, its appearance elicits quite the reaction from Jacqueline, who got more than she expected from the Torch’s blood transfusion. 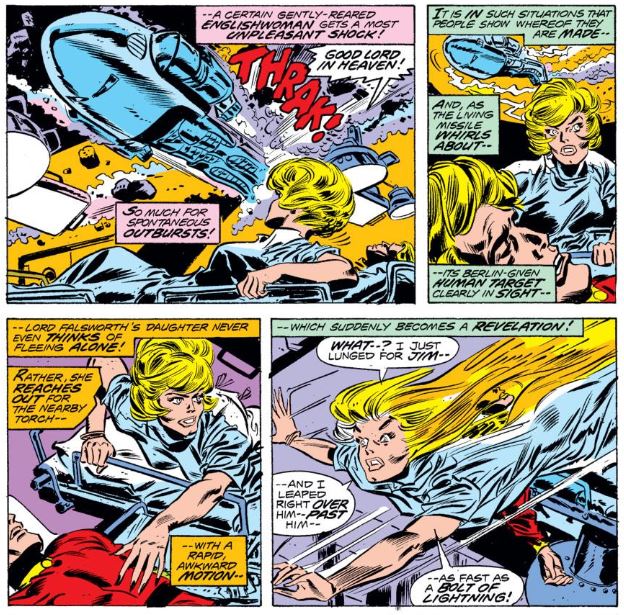 She grabs the Torch and then flies into the room where Cap and Bucky are… and Bucky makes a prophetic comment (not that he’ll ever get credit for it). 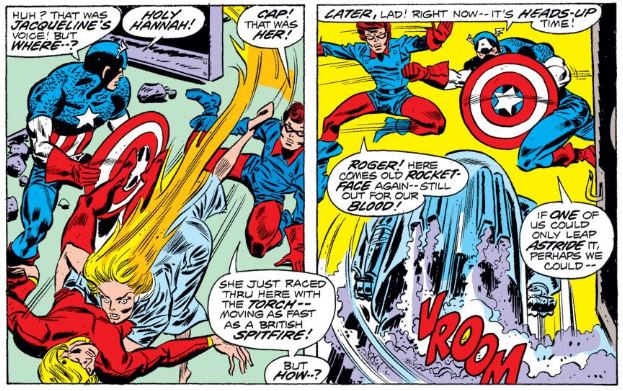 After Namor incapacitates the Blue Bullet by flying head-on into it, they have a Scooby-Doo villain moment. 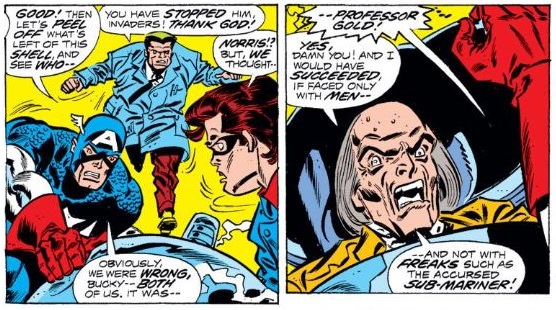 (We’ll see why the not-so-good professor did it in the next issue.)

After Jacqueline asserts herself to be a superheroine to the Invaders and reunites with her father—who is recuperating very nicely, thanks for asking—she again clings to the wrong man, with disastrous results. 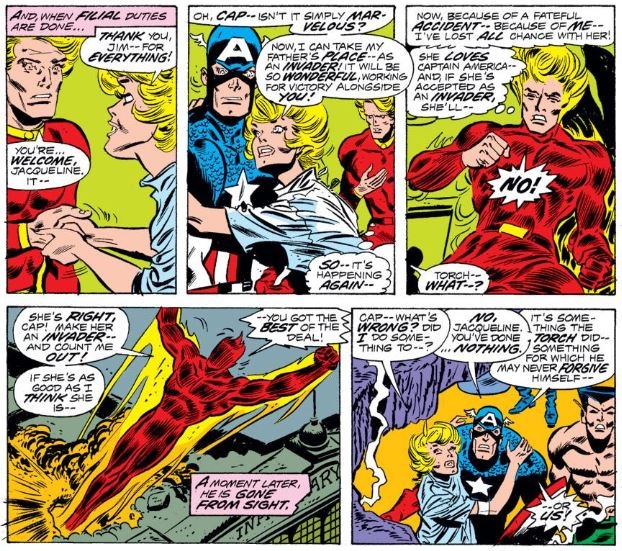 The Human Torch’s drama continues in issue #12 as he visits Professor Gold (née Goldstein) in custody to determine why he turned traitor, working for the Third Reich to protect his brother Jacob, who lives in the Jewish quarter in Warsaw.

After the Torch returns to the rest of our cast at the Fallsworth’s castle, Jacqueline makes her grand debut as a genuine superheroine—costume, codename, and all. 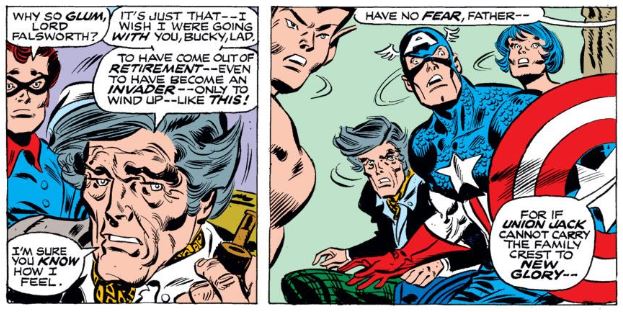 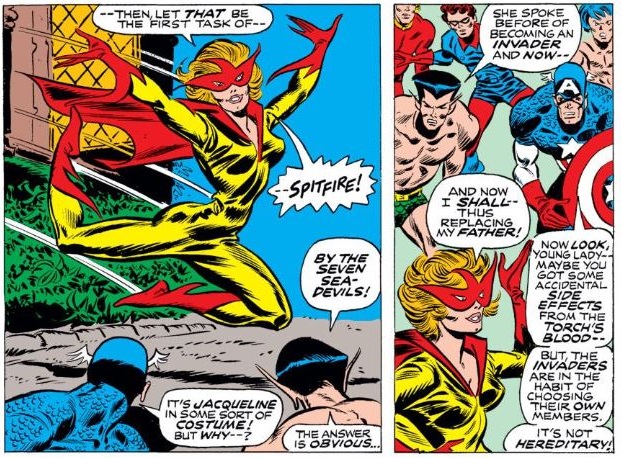 While Jacqueline demonstrates her abilities, Cap considers the downsides of letting her on the team, including his familiar tune of protecting the lives of those he works with—one that only plays more loudly after he wakes up in the 60s and learns of Bucky’s death in the war. 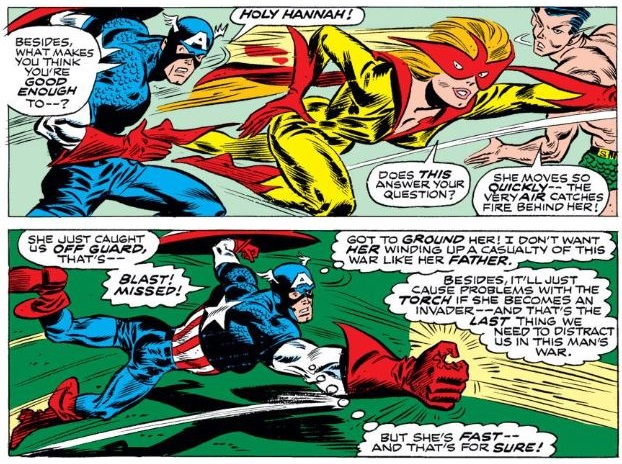 With Spitfire by their side, the Invaders fly to Poland to save Jacob Goldstein, but find him unwilling to leave his home, much to Cap’s frustration. 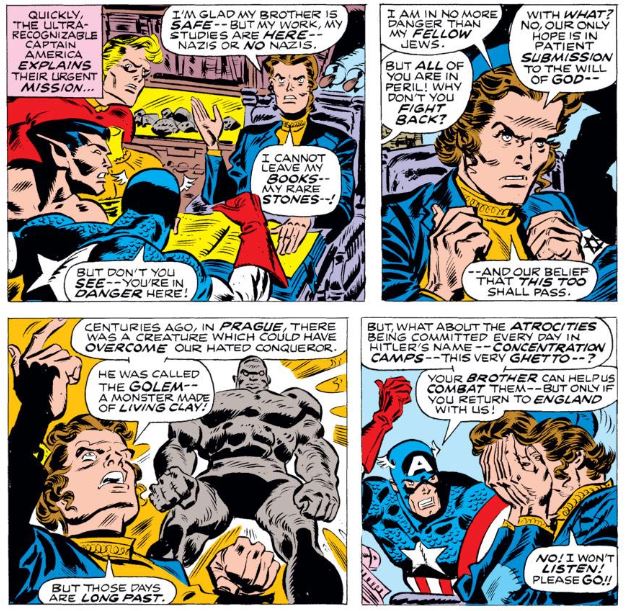 Before Cap has a chance to convince him, Nazi tanks show up, looking for the costumed Amerikaners more than the Jewish residents of the area—although they’re more than willing to use the latter to lure the former. Jacob and his neighbors’ bravery notwithstanding, however, the Invaders do what heroes do: surrender themselves to save others. 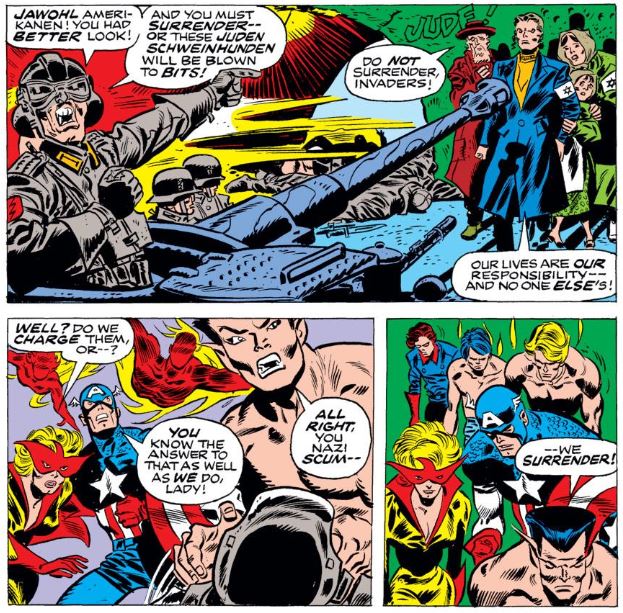 As the Nazis knock out the Invaders with a gas grenade and leave with them, Jacob offers himself to the Nazis in their stead, but is told he is not worth a bullet, which makes him question his pacifist stance.

Issue #13 opens with an extraordinary close-up of Cap from artists Frank Robbins and Frank Springer. 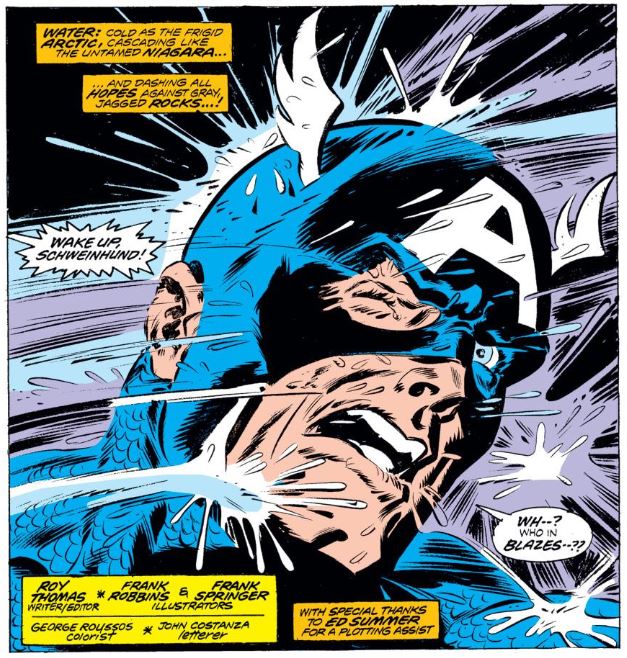 The Invaders are now held captive in a castle in Warsaw: the Torches underwater, Namor encased in concrete and under heat lamps, Spitfire tied to a rack, and Cap… well you can see for yourself. 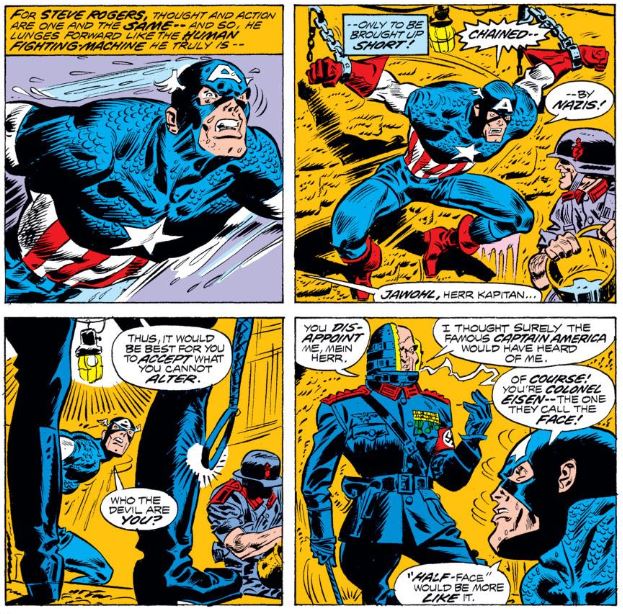 At least Harvey Dent had the self-confidence to be Two-Face rather than Half-Face!

Below we see another hint as to the make-up of Cap’s shield, not yet revealed to us (in 1977). 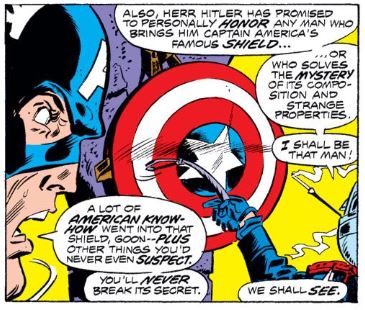 After Spitfire taunts Eisen, the Nazi readies his whip, but then discovers how much a chained Sentinel of Liberty can still do… in the end, however, it is not enough. 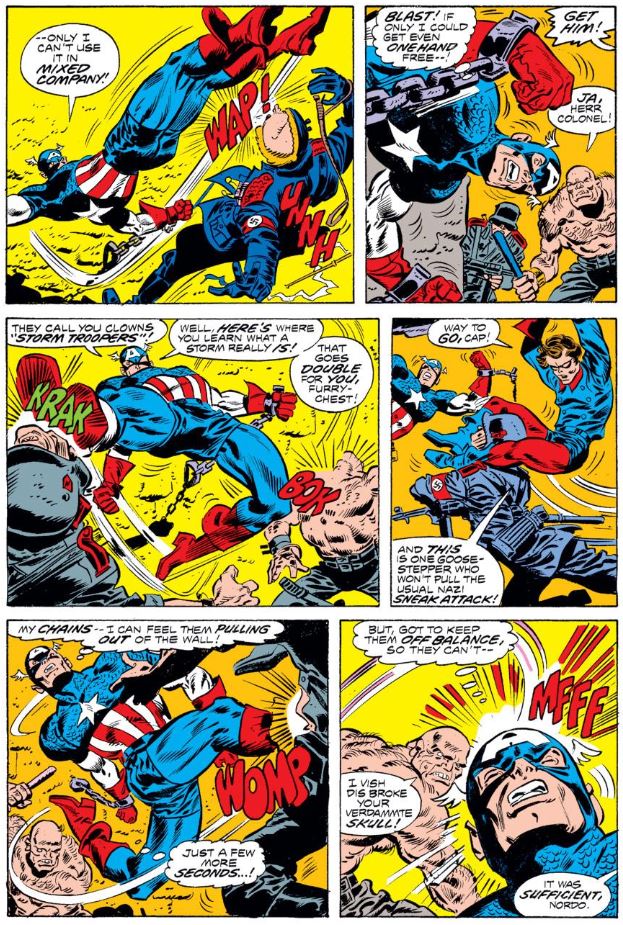 Meanwhile, in the Jewish quarter, Jacob Goldstein has crafted clay and a mysterious liquid into the Golem of legend, which combines with him and attacks the Nazis threatening his neighbors… 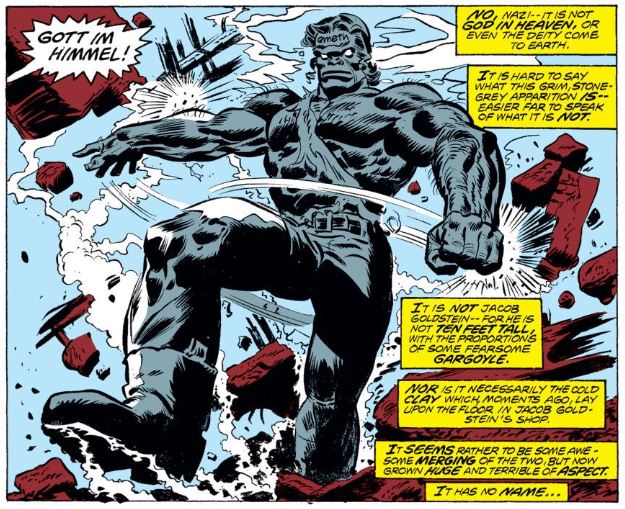 …then storms the castle to free the Invaders and fight Eisen and his cronies at our heroes’ side, killing Eisen before transforming back into Goldstein. 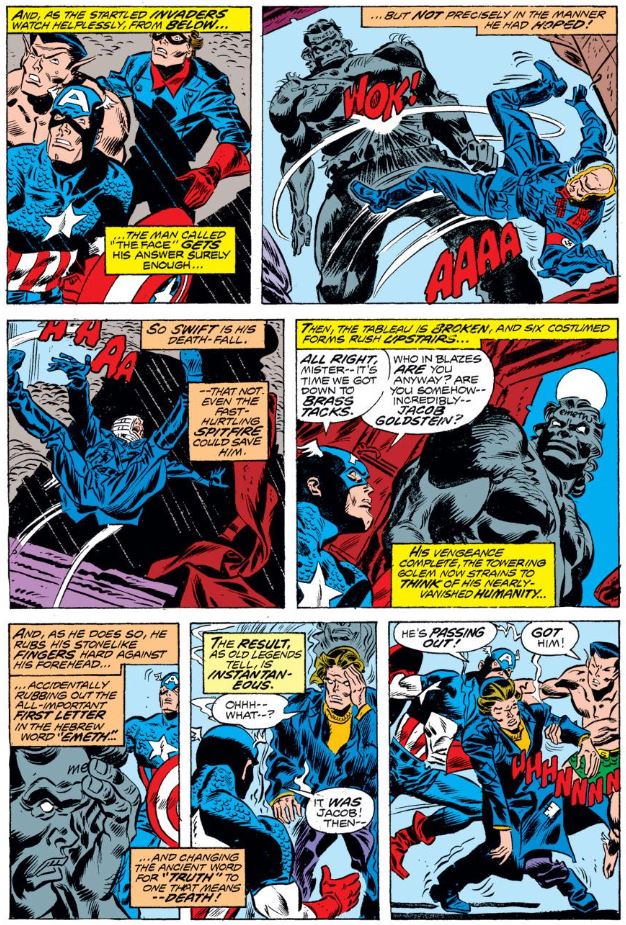 But the experience has not affected his resolve to stay with his neighbors and fight to drive the Nazi threat from their homes—an insistence I would like to think Cap understands and respects (even if he doesn’t show it below). 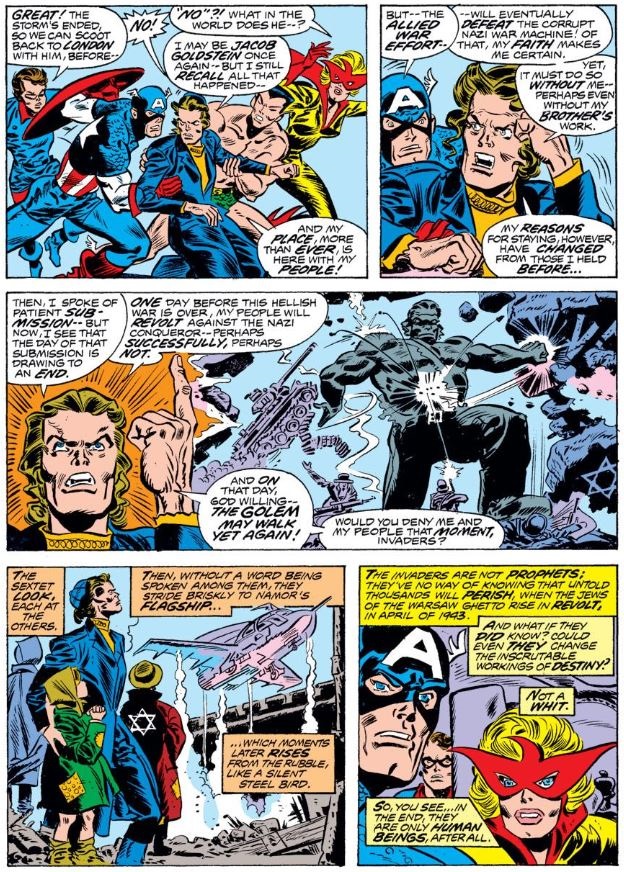