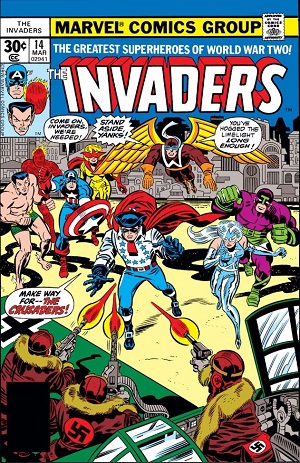 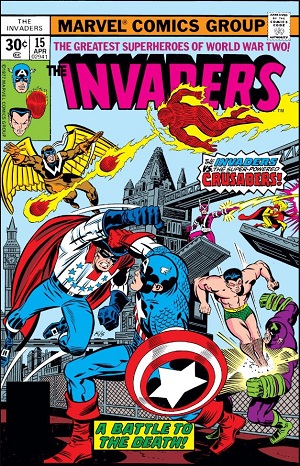 Roy Thomas is up to his old tricks again. These two issues introduce the British WWII team the Crusaders, who bear a striking resemblance to the Freedom Fighters, DC’s team that, like the Invaders themselves, was retroactively formed from 1940s characters—in this case, Quality Comics heroes that DC acquired the rights to, including Uncle Sam, Phantom Lady, Doll Man, Black Condor, the Ray, and the Human Bomb, many of whom Roy would use in his WWII-era book at DC Comics, All-Star Squadron. (At the end of the post, we’ll see this “gag” mirrored at the Distinguished Competition itself at the same time.)

Invaders #14 opens with our heroes finding themselves in the middle of an air battle between British and German planes. I show the panels below just to remind you that Spitfire (Jacqueline Falsworth) is a full member of the team…

…and also because I wanted to get in one image of the stars of the book before the focus shifts to these folks.

“Who in the name of–?” indeed! Let them explain.

In other words (or worlds), it’s Doll Man, Uncle Sam, and Phantom Lady from the Freedom Fighters, reimagined here as half of the brand-new Crusaders—as they tell half of the Invaders when they meet.

So where’s the other half of each team? Don’t worry, it’s all coming together. 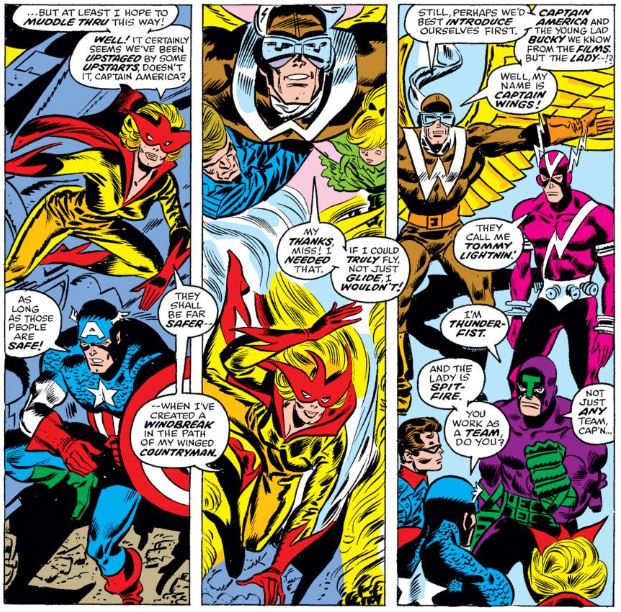 Again, this is essentially Black Condor, the Ray, and the Human Bomb from the Freedom Fighters. (And you know the others.)

After the Crusaders take off (evading Cap’s question about how they got their powers, hmm), the Invaders regroup, and Cap not only pays heed to the Torches’ more defensive abilities, but also expresses superhero solidarity to a passing reporter…

…after which Spitfire tries to engage him in a quote battle, forgetting Cap’s impressive literary background (noted often at this here blog) as well as his love for contemporary film: Casablanca was released in November 1942, conveniently dating the events of this issue. (I seem to remember a recent reference to early 1943, which is consistent. Just checking, Roy!)

When exactly did Cap have a chance to see a movie, anyway?

The Invaders reconnect with Lord Farnsworth—father of Jacqueline and formerly the British hero of World War I known as Union Jack, introduced in issue #7)—who reacts strangely to hearing about Dyna-Mite in particular. Put a pin in that, because the Invaders arrive at what seems to be an assassination attempt on King George VI… thwarted by none other than Dyna-Mite himself.

The Invaders are more than a bit suspicious of the Crusader’s serendipitous presence on the scene, which isn’t helped when the new team manages to usurp the Invaders’ role in protecting the king (a role that, honestly, I didn’t know they had).

Are the Invaders’ suspicions reasonable? Well, issue #15 opens up with a group meeting to discuss just that topic.

Our heroes also bring up the topic of national pride and superhero jurisdiction—both of which, of course, are completely beside the point for our friendly neighborhood Sub-Mariner, who prefers to focus on the mystery behind the new, inexperienced Crusaders, but concedes Jacqueline’s point that none of them are old hands at this. 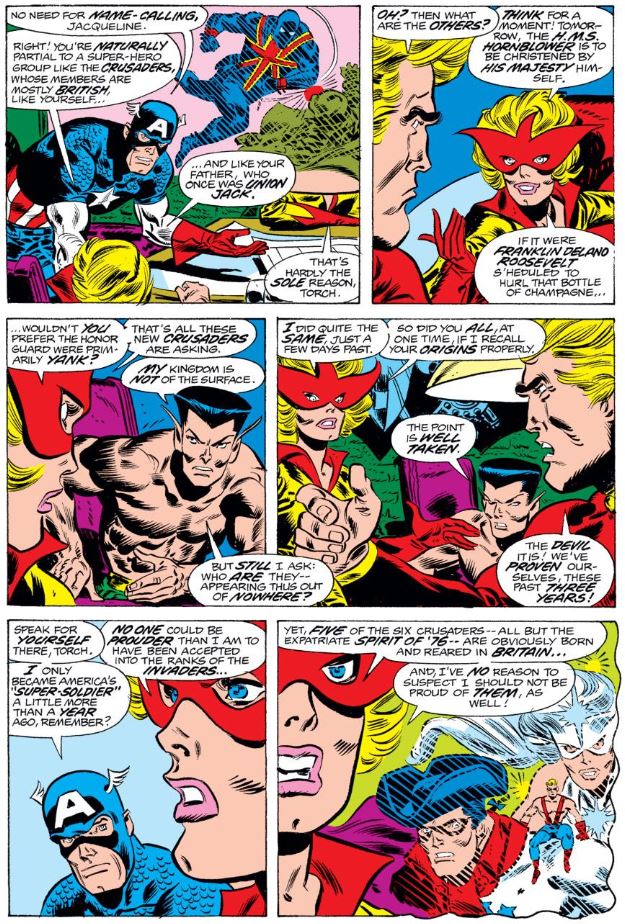 Cap brings it back around to national pride, but eventually accepts Spitfire’s point (but not without a touch of condescension).

And what is up with the Crusaders anyway? Turns out the Invaders were right to be suspicious… and the Crusaders themselves are a bit curious as well.

Might there be a connection between this Alfie and the film of the same name, starring Michael Caine (and later remade with Jude Law)? Or maybe another pastiche, this time of a certain Mr. Pennyworth? Or am I reading too much in things? We may never know!

Anyway, Alfie is not entirely a good guy, as we begin to learn here (alongside the Crusaders).

Although this resembles Captain America’s own origins—all being judged ineligible to serve his or her country despite a deeply felt calling—we soon learn that Alfie not only formed the Crusaders and gave them their powers to discredit the Invaders as Nazi sympathizers, but he is actually working with the Nazis himself, and set up the Crusaders to “protect” the king, knowing they would be less likely to stop an actual assassination attempt than the Invaders would. (The previous one, as you no doubt guessed, was staged by Alfie, without the Crusaders’ knowledge, to put them in exactly that privileged position.)

Dyna-Mite learns this after hearing Alfie talking with his Nazi controllers, and then rushes to the Invaders… 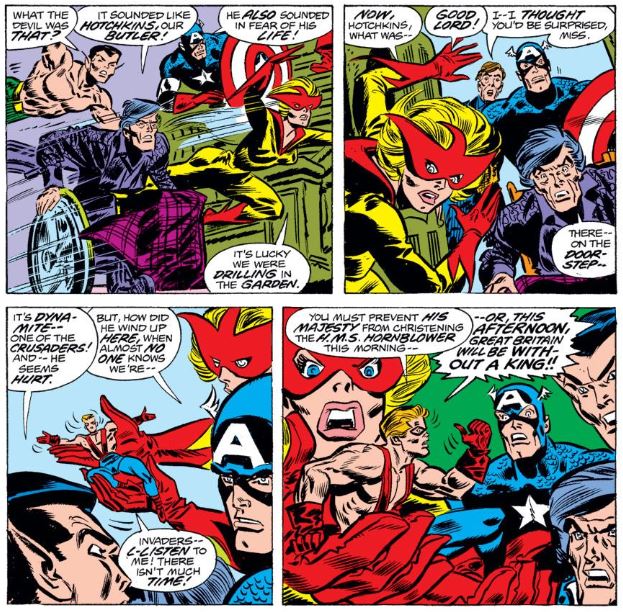 …who make it to the christening in time to stop the king from lobbing the champagne “bomb,” but the rest of the Crusaders have no idea about Alfie’s ruse. 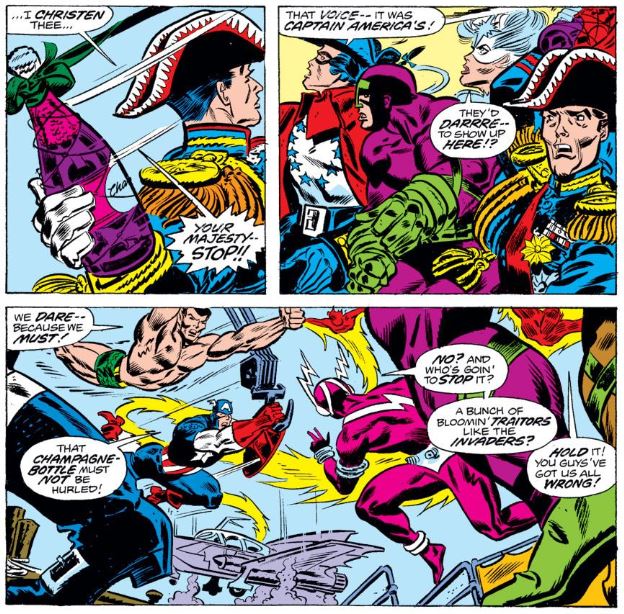 So they pair off and fight, and Cap naturally takes on the Spirit of ’76 (as he did the Patriot when the Invaders, under the control of the Red Skull, took on the Liberty Legion in Marvel Premiere #30).

Coincidentally (or not), both the Spirit of ’76 and the Patriot, in that order, would take on the Captain America identity after Steve Rogers went missing and was presumed dead. (More on that in What If? #4.) And “star-spangled kid” had to be a reference to yet another patriotic-themed Golden Age hero… that Roy Thomas, you really have to keep an eye on him!

In the end, the assassination is prevented and Alfie dies while fleeing the scene, rendering the Crusaders powerless. When the Crusaders beat themselves up for falling for Alfie’s scheme, Cap expresses sympathy, confirming that their hearts were in the right place, making them an easy target for Alfie’s manipulation. 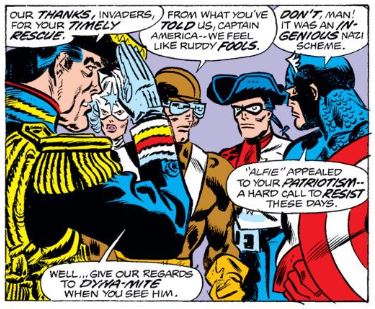 Where did Dyna-Mite go? He disappeared along with the Fallsworths… more on that to come.

BUT THAT’S NOT ALL…

Meanwhile, over at DC Comics, in the relatively new Freedom Fighters title, Uncle Sam and the others meet a new team of heroes named… guess what… the Crusaders, and just from the covers you can see who they were based on.

Need a better clue? Here is the final page from Freedom Fighters #7, which introduced the “new” characters.