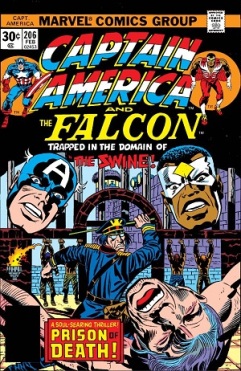 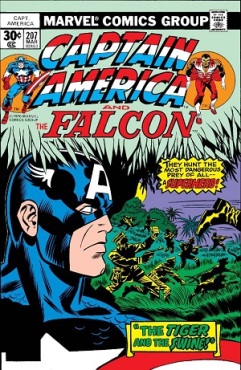 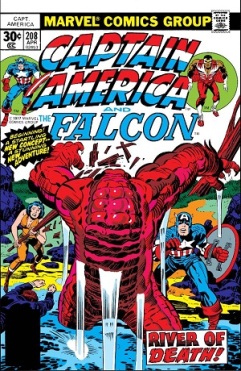 These three issues tell the story of Hector Santiago, a.k.a. “the Swine,” a vicious Latin American prison warden/warlord who actually doesn’t survive issue #208, and appears very little in this post at all. However, the story does leave us with another character who is perhaps the greatest contribution that Jack Kirby gave to the Marvel canon in this run, as well as some great battle scenes with Captain America, who also has some intense drama with Sharon Carter.

As issue #206 opens, we find that Leila, the Falcon’s girlfriend, has finally recovered from the Night People’s brainwashing (in issues #201-203). Cap shows his softer side when he asks the doctor to give them some privacy, but then lapses into some romantic thoughts of his own, which are distinctly less positive… 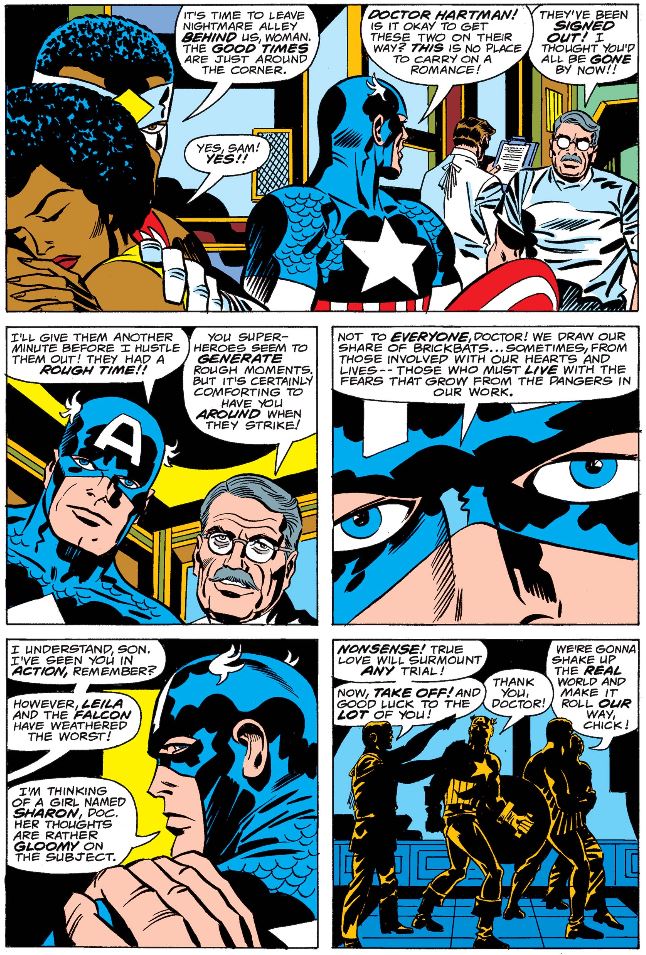 …although the doctor is refreshingly optimistic, as is Leila below. (And the pilot wisely keeps his thoughts to himself.) 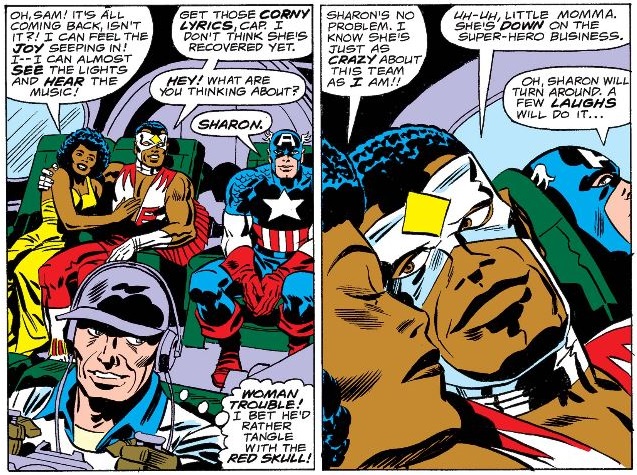 By “a few laughs,” I assume he meant his outfit at dinner, but it still doesn’t work, as Sharon appears to be looking for a fight. (Note Leila’s professional ethics, on behalf of Cap and Sam, on display!) 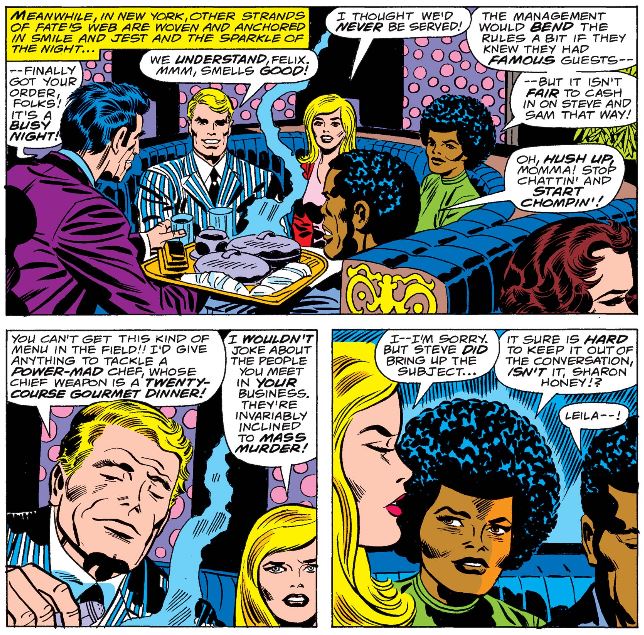 I don’t think a firefight is what she wanted, though. More important, it seems astonishingly naive of Steve to see two men, at least one of them armed, attack Felix in a restaurant and assume Felix is resisting arrest by the police. (Just imagine if it had been Uncle Felix—what a cat-a-strophe that would have been!)

Steve finally overcomes his assumptions when the second guy pulls his gun, and then it’s Sam’s turn to be naive when he questions an obvious criminal’s judgment in firing his weapon in the restaurant and indulging his “killing habits” with women around (?).

Back at Sharon’s apartment building, she accuses Steve of being both a trouble magnet and reveling in it.

In lieu of Felix, the two thugs decide to abduct Steve instead, and not a minute too late, judging from the conversation they interrupted, which focuses on the persistent issue underlying Steve and Sharon’s relationship—namely, the conflict between duty and love, which was originally mainly Sharon’s problem (when she refused to quite S.H.I.E.L.D. for him), and is now Steve’s (as it has been since she did leave her job). Below, he frames his point in terms of dedication to principle, although he claims to weigh his dedication to her just as much, while she continues to accuse him of being in love with the fight. 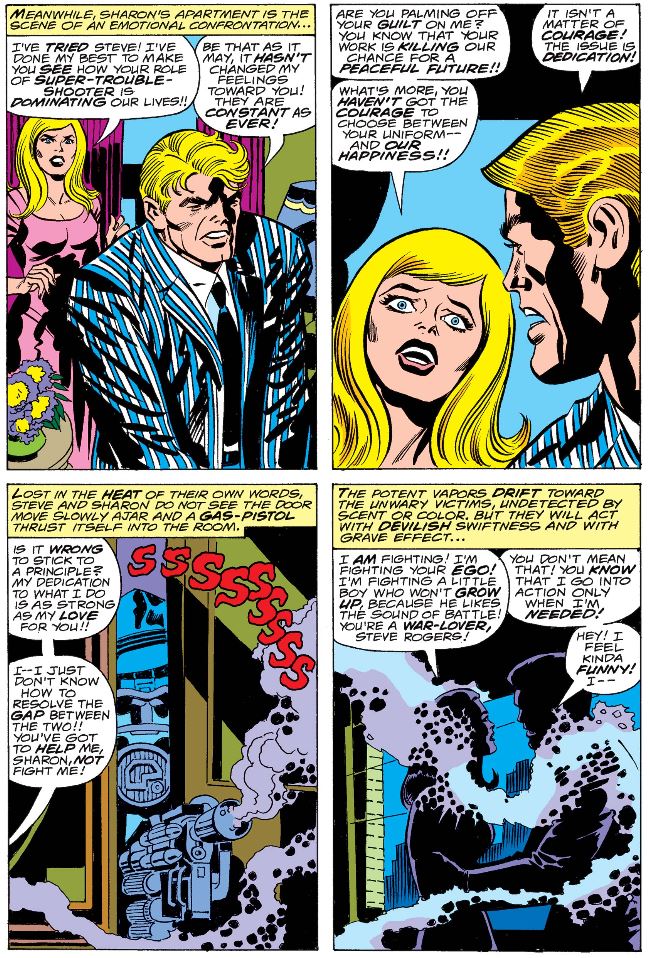 The thugs make off with Steve after he passes out, and at the beginning of issue #207 he wakes up on their airplane… and he’s grouchy! (It’s so hard to sleep well on a plane.)

Once Steve makes it to the pilot, he learns a lesson familiar to superheroes of all stripes: You can’t scare bad guys if they’re more afraid of their boss than they are of you. (This holds especially when whatever you’re willing to threaten—unless you go snikt or bang—it’s a good bet their evil boss is willing to do more.)

Before the Swine even has a chance, though, one of the other thugs shoots the pilot and the plane goes down in the fictional Central American country of Rio De Muerte, leaving Steve grateful to be alive, after which he quickly turns his attention to the safety of his fellow travelers (though they be bad guys).

Escaping from the Swine’s prison guards who arrive to investigate the crash, Steve finally makes the wise tactical decision to get rid of that awful suit and upgrade to a better set of stripes. In the process, he shows that he knows a bully when he sees one, and expresses a welcome political humility regarding the affairs of other countries in which neither side may be obviously deserving of unqualified support.

When Cap and the guards finally meet, we’re treated to some action sequences from the King, paired with snappy banter that Cap only seems to use while fighting. (Could this be a sign that Sharon isn’t completely off-base about his being in love with battle?)

Finally, Cap comes face-to-face with the Swine. (I haven’t shown his face yet in this post, so here it is, such that it is.)

Cap uses his shield to deflect the bullet and push past the Swine, escaping into the jungle only to find evidence of the prison itself, and realizes he has to reveal his presence if he wants something to eat or drink.

After making quick work of the guards, Cap realizes the truth about the Swine’s brutal treatment of his prisoners (and we can trust that, even if it’s a shocking sight, it’s not an unfamiliar one, given his history).

In issue #208, Cap continues to search the jungle for signs of civilization, but instead find only this crimson critter, known to the natives as—checks notes—the Man-Fish. 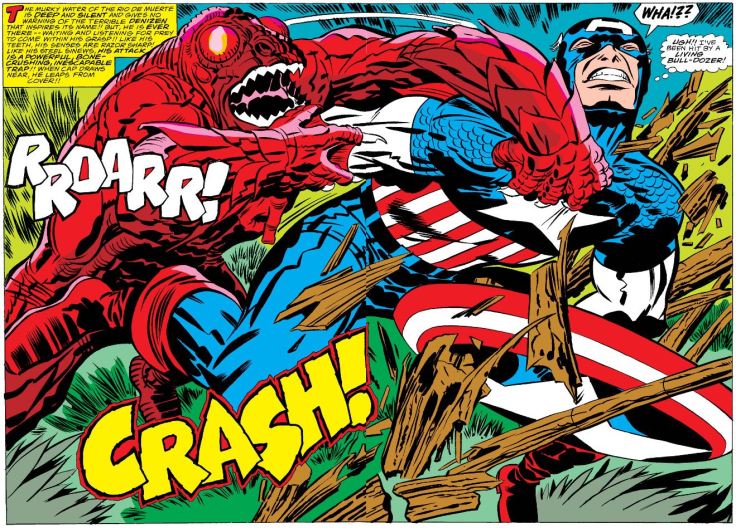 The prison guards, searching for the Sentinel of Liberty, come upon the battle and shoot at the Man-Fish, scaring him into the water and leaving only Cap, depleted yet defiant.

The guards taunt him for a bit, giving their Cap-tive [pause for laughter] a chance to get his second wind, restoring him to full battle and banter mode.

Cap is quick enough to flee gunfire and dynamite, but his luck falls through and he finds himself face-to-face once again with the Swine (and no less defiant for his current predicament). 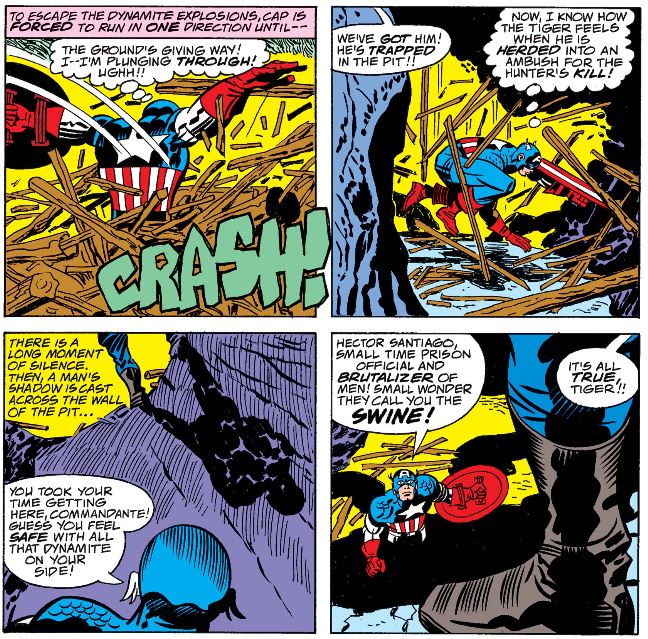 Another character who has appeared alongside the Swine throughout this story (although not until now in this blog post) is Donna Maria Puentes, the Swine’s cousin, who taunts him, challenges his brutality, and celebrates the man who has thwarted him and his guards. (Ain’t family great?) Below, the Swine seems all to happy to introduce them… 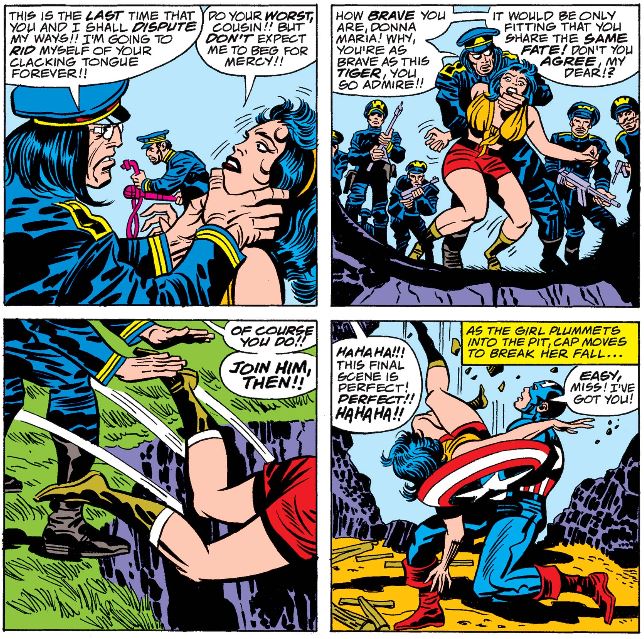 …and naturally, Cap catches her.

As the Swine lights his flame-thrower to threaten Cap and Donna Maria, the Giant-Size Man-Fish returns, and while he attacks the Swine, Cap devises an ingenious way out of the pit, using his shield like a hammer. (Take that, Thor!) 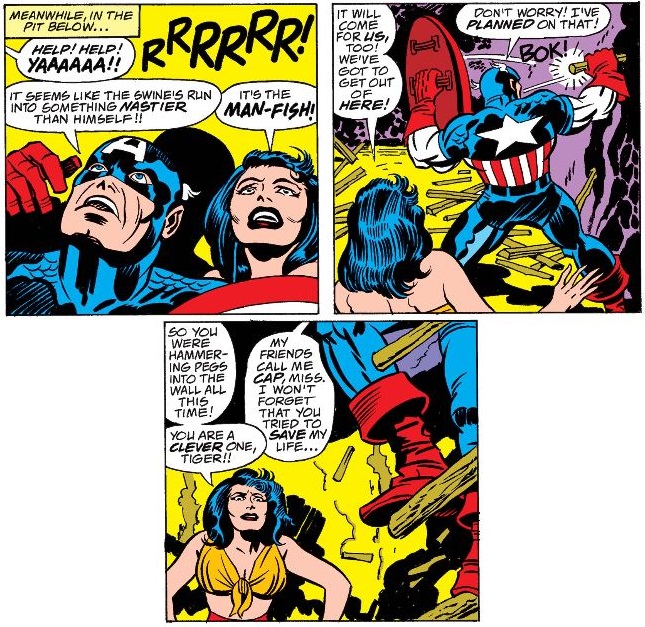 Once they escape, Cap and Donna Maria see that the Swine esta muerto, about which neither is remorseful—and which they soon forget when they have to face his killer themselves. After a quick battle, the Man-Fish turns at the sight of a mysterious signal, returning to the river, and Donna Maria and Cap realize there’s someone behind the creature…

…someone who reveals himself on the final page.

The teaser for the next issue reveals his name to be Arnim Zola, who will become a prominent foe of Captain America in the following decades of comics (and also in the films, as played as Toby Young). His story begins in earnest in the next issue (and the next post).