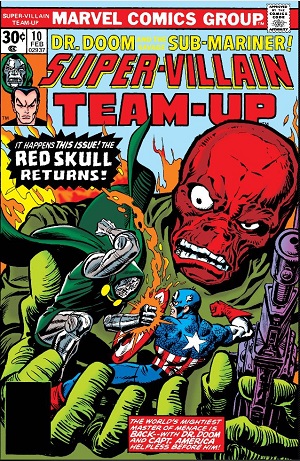 Wait, Captain America… in a supervillain book? Did he “hail Hydra” already? Is this “Secret Empire 1.5”?

Don’t click on that “back” button, my friends: Cap features in these three issues, but not as part of a super-villain team-up. (Whew!) Instead, his archfoe the Red Skull joins Namor and Doctor Doom in “their” book, and where the Skull skulks, Cap is never far behind. And far from a superficial guest appearance, this three-parter actually focuses quite a bit on the Sentinel of Liberty, although the ethical content focuses as much on Doom as on our hero.

The opening splash page to issue #10 drops us right in on the action, and we can only hope Cap knows what’s going on, because we definitely don’t!

His last statement above, continued in the page below, is a fine illustration of how Cap’s legendary humility nonetheless allows him to acknowledge his extraordinary abilities and talents. (For on this paradox within humility or modesty, see my series of blog posts at Psychology Today on the issue, starting here.)

“Indomitable will to win” sounds a bit off to me. “Seek justice,” sure. “Protect the little guy,” “fight tyranny,” “defend liberty,” of course. But… “win”?

Anyhoo… his rather cryptic statement at the bottom of the page above leads to the lengthy explanation of Cap’s current situation below, branching off from the storyline in Avengers #154-156 and Super-Villain Team-Up #9.

Below, we see a unique rationale for direct action, especially when it’s unexpected.

Damn, Doom, that was harsh. (But not unexpected.)

To this point in comics history, Cap and Doom have not faced off many times, so this extended interaction is quite the treat. Our hero has definitely faced villainous arrogance before, of course, but Doom’s has few peers, and his royal demeanor separates him from that of, say, the Red Skull (whom we’ll see very soon).

Luckily for Cap, Doom also shares with the Skull his hesitance to kill his foe at his first chance.

Our first close look at the scepter reveals its source, and also the focus of Cap’s and Doom’s pending temporary team-up. Now, if Doom could only learn to take a compliment! 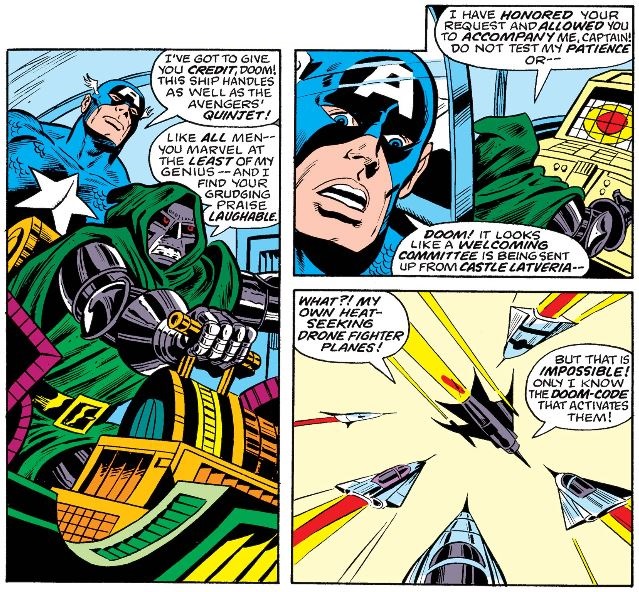 The drone attack gives Cap a chance to revisit a rarely mentioned element of this WWII battle experience.

The final drone, a “Rainbow Missile,” hits the plane and brings it down in issue #11, where we see the additional effect of the missile’s strange rays. 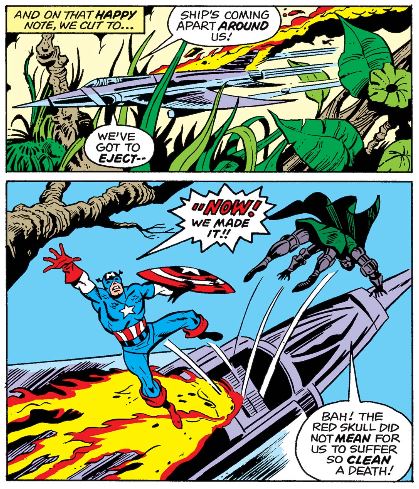 How many other blogs have tiny Cap and Doom fighting snakes? (I don’t know; I’m asking.)

Cap and Doom succeed in bringing the snake down, but Doom takes the success of their cooperation a little too far.

“Bah, Satan! What has he done? He is nothing compared to Doom!” and so on. (Actually, on the next page he does say, “I assure you, Captain, you would scarce notice any difference between the dark lord–and Doom!” This is strange, because Doom rarely regards himself as evil, and instead as humanity’s only hope for survival… under his rule, of course.)

Cap and Doom make it to Doom’s castle, where the Skull is currently operating, and the Nazi villain floods the moat in an attempt to… well, I hope he didn’t expect to kill them, but maybe slow them down at least. Despite his comparisons of himself to Satan, Doom shows the sense of honor that makes him a more interesting villain than most. (Don’t hold your breath for The Virtues of Doctor Doom, but still.) 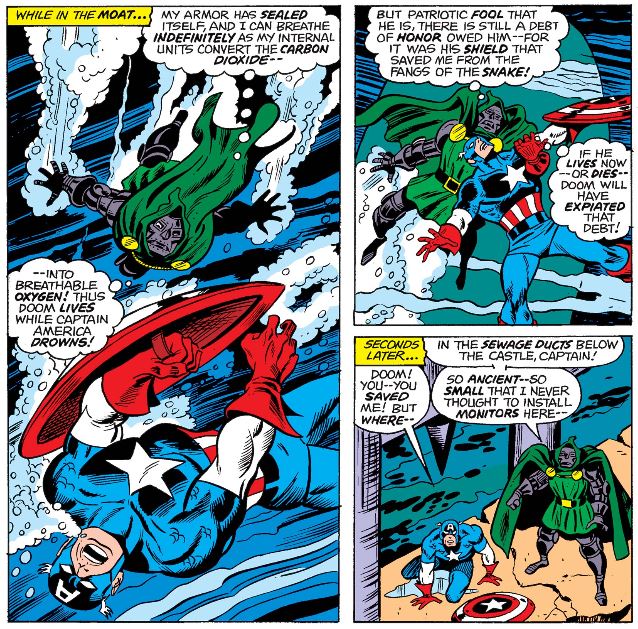 Cap and Doom—who are still tiny, remember—find their way into the dungeon, where the Sentinel of Liberty sees yet another unexpected side of the ruler of Latveria. 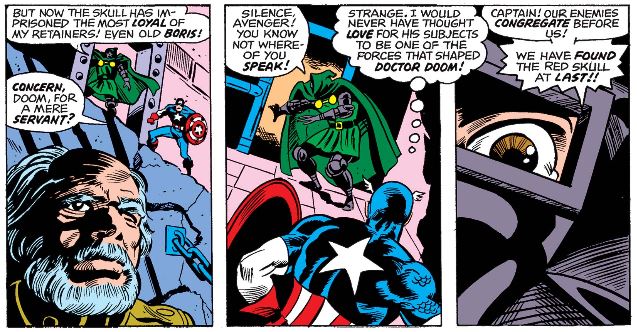 We finally catch sight of the Red Skull, along with Namor and the Shroud, a dark knight of sorts (who is also blind, like Red Batman).

Li’l Doom attacks the Red Skull, but luckily Namor knows the lesser of two evils when he sees him him, and also apparently knows Doom’s control panel well enough to push the one button that reverses the shrinking effect of the Rainbow Missile’s rays.

“Seek not to advise Doom… is your name ‘Doctor America,’ hmm? I didn’t think so!”

It’s everyone versus the Red Skull, but when the Shroud decides to fight Doom as well, Cap finds himself joining Namor in the uncomfortable position of defending Doom against the Skull. (Just imagine him trying to explain that at Ben Grimm’s next poker game.)

Of course, the Shroud drives Cap’s difficult judgment call home, which I assume Cap would have defended at more length if there weren’t still a super-villain to defeat. 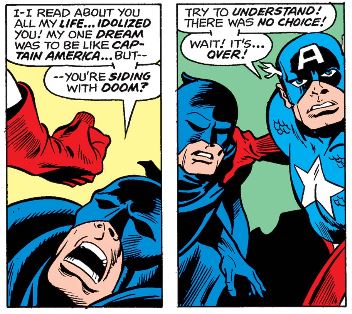 Actually, it was not over, as the Red Skull is transported to the moon, to fire his hypno-ray at the Earth, making mindless zombies out of us all! (Just like Twitter!)

In issue #12, Doctor Doom and the Shroud pursue him, and Cap reminds Doom of the precarious nature of their partnership, which seems to offend Doom’s famously delicate sensibilities. 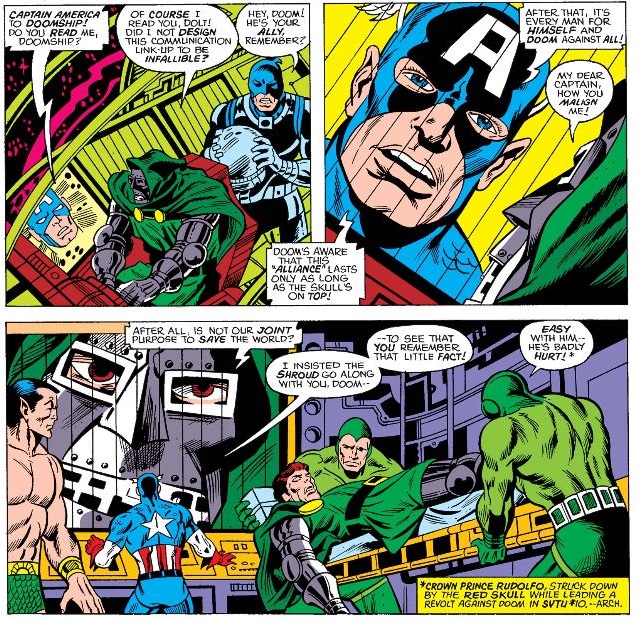 Doom and the Red Skull have a lengthy battle on the moon, and Cap borrows a spaceship from S.H.I.E.L.D. to… help, I guess. (That isn’t made clear.) But it’s a good thing he showed up when he did…

Cap finds the Shroud in bad shape, and swears vengeance… even more vengeance… on his greatest enemy, to be exacted at a later date. 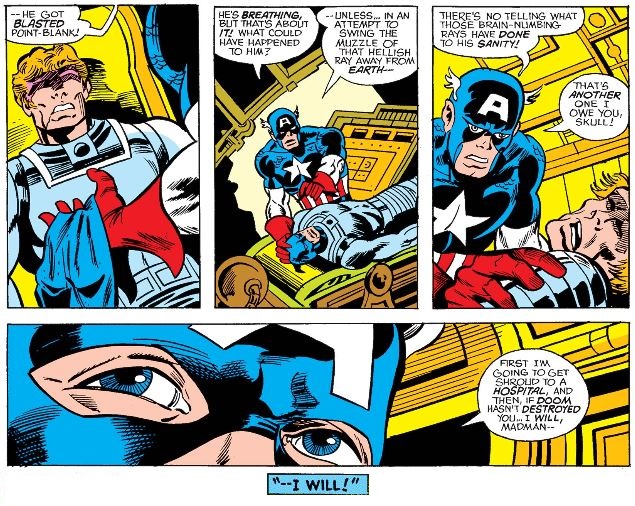