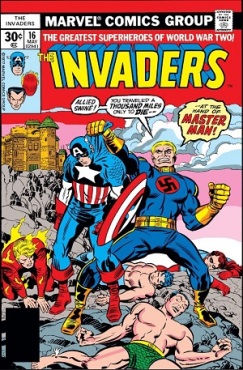 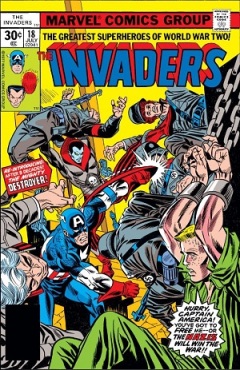 These three issues reintroduce another Golden Age Timely Comics hero to the book, and Captain America has a Superman/Captain Marvel moment when he discovers a comic book character with a strikingly familiar origin to his (and I’m not talking about his own portrayal in the Marvel Universe version of Timely Comics). All of this sets up the return of an Invader in the next post (the continuation of this storyline).

Issue #16 opens with a London moviehouse audience watching a newsreel featuring the Invaders, recalling scenes from Sgt. Fury and His Howling Commandos #13, Tales of Suspense #77, and Captain America #105, the last two involving Cap in the “modern day” revisiting his past adventures. 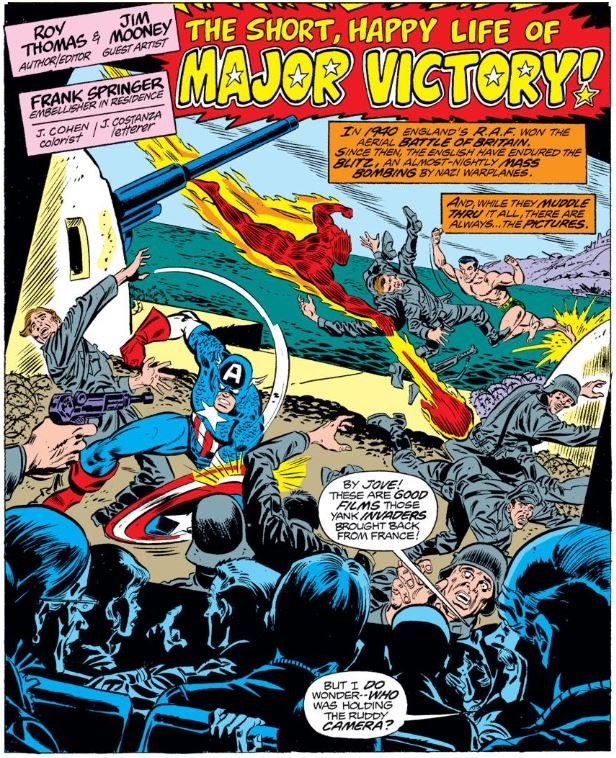 In this scene, two of the Invaders themselves are enjoying the show and the audience’s reactions… well, at least one of them is, while the other is always vigilant. (And he is right to be, as we shall see later.)

Steve is understanding, though, being relatively young himself at this point—even when Bucky essentially reveals their true identities.

Steve and Bucky leave the theater behind Bill and his companion Julia from above, and after Steve notices them disappear suddenly, the city goes dark in anticipation of an air raid. When they hear a scream, our heroes investigate and find their fellow moviegoers being hassled by hooded Nazis, and they jump into action. 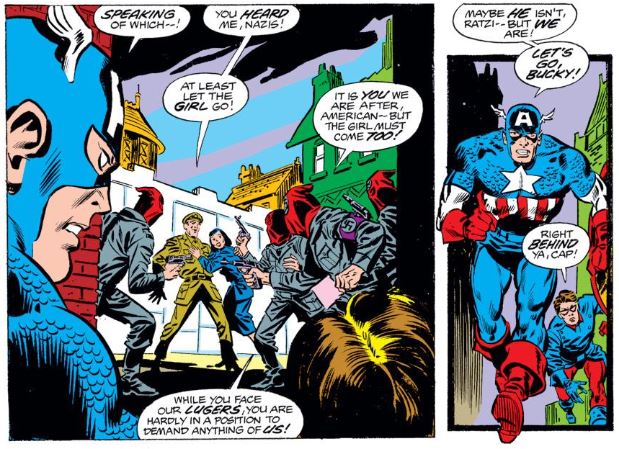 As they fight, Cap makes a point that unfortunately rings just as true today as it did during World War II.

While that fight goes on, Julia makes this a date Bill will never forget. 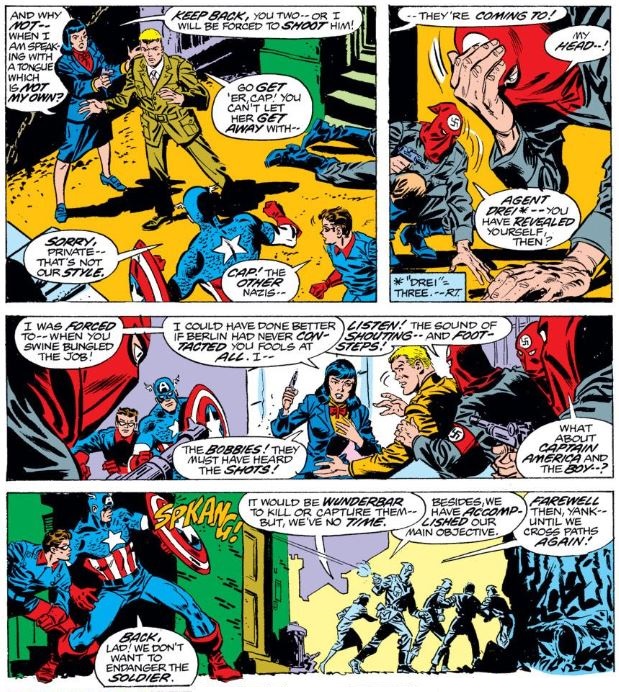 Of course, Cap chooses to protect the hostage rather than endanger his life, even at the cost of letting the Nazis go. The only surprise comes when the Invaders assemble with their liaisons and Toro recognizes Bill’s name (including a particularly fine surname).

Private Lee runs to Forbidden Planet and comes back with “research.” (My kind of research, at least.) 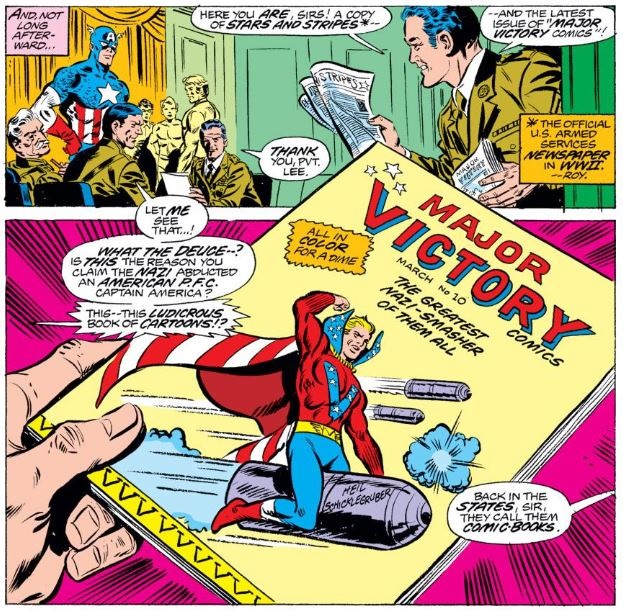 Major Victory certainly wouldn’t be the only Captain America knock-off—and Cap wasn’t even the first patriotic-themed hero, that honor going to the Shield—but this one is uncomfortably close to Cap, as we see below.

Our heroes conclude that the Nazis abducted Biljo White because they suspected he had inside information on the formula for Cap’s super-soldier serum, based on the “details” provided in his comic strips. Cap announces his plans to rescue White, and then the military demurs, he reminds them of the value of one person even in wartime.

To his credit, the man who discouraged Cap from rescuing White admitted to himself in the next panel that he was ashamed of himself. But this blog ain’t about him, so I don’t have to show it. (Maybe he’ll think about that next time he opens his big mouth!)

The rest of the Invaders are along for the ride, as they take Namor’s flagship straight to Hitler’s fortress. (No beating around the bush with these fellas!) But their ship is attacked and destroyed by someone who seems much more powerful than he was when they last met.

Master Man defeats all the Invaders and imprisons them in Hitler’s fortress, yet our heroes are still surprised when the man who lives there actually, you know, shows up at the end of the issue. 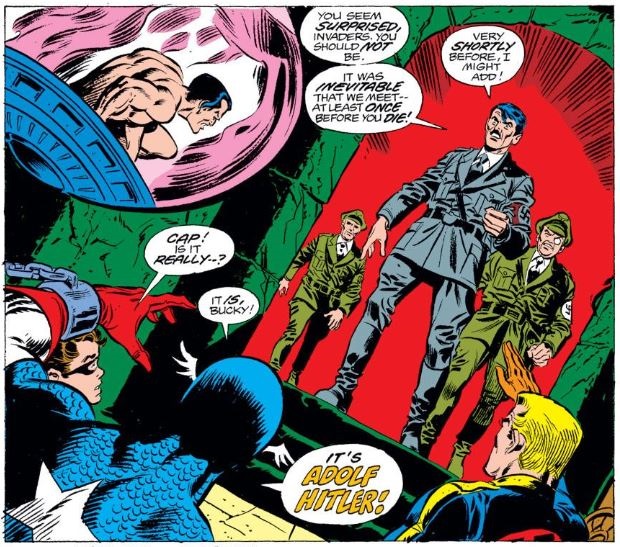 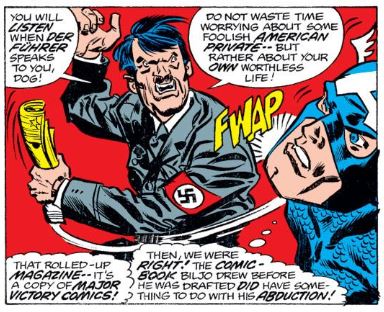 By the way, what ever happened to Biljo and “Julia” (actually Frieda Ratsel)? He is being tortured for the information the Nazis think he has about Project Rebirth, and she is supervising it.

Biljo does give her one component of the super-soldier serum that he heard from a scientist, Dr. Anderson (presumably the same one from Giant-Size Invaders #1 whose knowledge the Nazis used to create Master Man), which she then adds to the Nazi’s experimental serum and uses it on herself to transform into… well, you’ll see.

Meanwhile, the Invaders free themselves and attack the Nazis outside, with Cap and Bucky curiously quippy while fighting Adolf Hitler and his men.

Namor fights Master Man while the Torches find Hitler, offering to let him live if he surrenders, when they are hit by a blast of water, courtesy of the new and improved “Julia.”

Cap clings to his outmoded code of chivalry, and he pays dearly for it.

…who definitely takes the brunt of the collision.

We can only assume that Cap and his cushion had come to and then chose to play possum before the Nazis arrive. 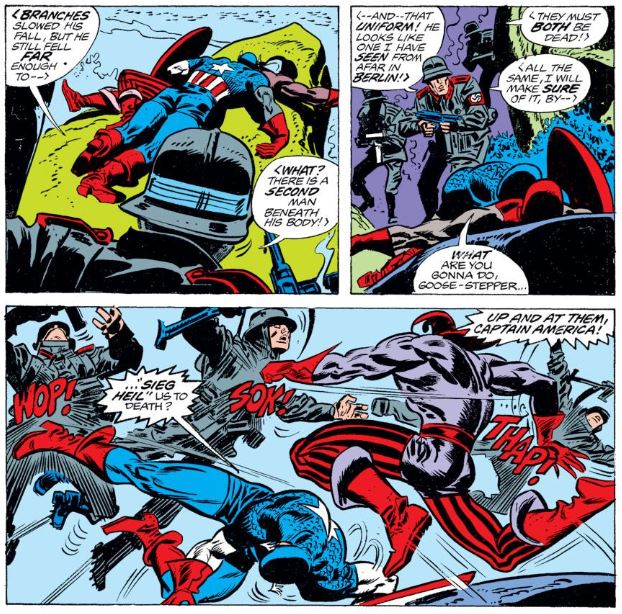 And who is Caps’ savior and new ally?

The Destroyer debuted in Mystic Comics #6 (October 1941) as journalist Kevin Marlow who was captured in Germany by Nazis and received an experimental serum developed by a German scientist, a fellow prisoner who refused to give the serum to the Nazis. As such things do, this serum gave Marlow super-strength, yada yada, and Marlow started fighting the Nazis on their own turf as the Mighty Destroyer.

Here, the Destroyer confirms most of this tale to Cap and reveals that his name is not Kevin Marlow, as believed by the FBI, but rather… well, we’ll find that out in the next post. (The Marlow version of the Destroyer will be revived by Marvel later.) In a tidy bit of retconning, though, the Destroyer confirms that his serum is a variant of the one used on Cap, connecting them together, as well as with Master Man and Warrior Woman. (You never know, you might have gotten the serum as some point too.)

While the other Invaders remain captured—and Spitfire, Dyna-Mite, and Lord Fallsworth, who left at the end of the last storyline, infiltrate Berlin to investigate Dyna-Mite’s origins—Cap wants to return to the fortress to find Biljo, but the Destroyer teaches him a lesson about patience (after which he tells his story and reveals his identity). 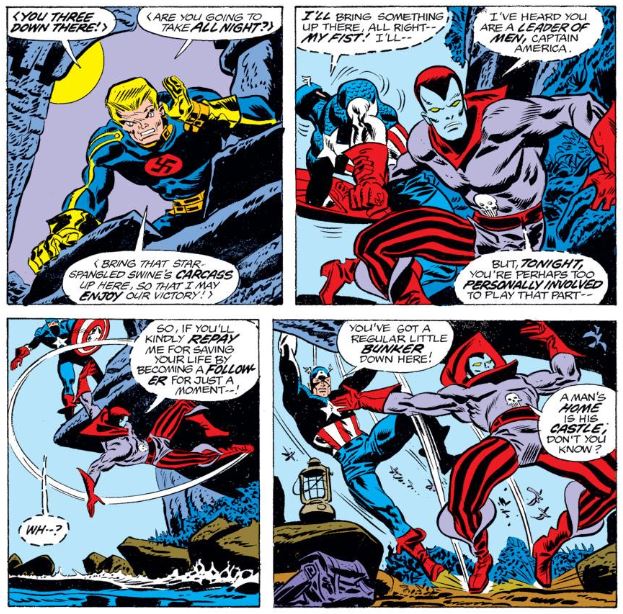 …but they get worse news regarding the other Invaders, to which Cap responds in the spirit of unexpectedly explicit vengeance.

We can chalk this up to the anger of the moment, but it is rather shocking to “hear” him say it out loud. (Wait until the next post to see if he follows through.)