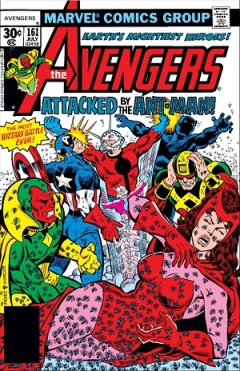 This octet of issues has very minimal Cap content, so please don’t expect much synopsis here (although the stories are very good—be sure to check them out, using the links at the end of the post).

Avengers #157 sees the return of the Black Knight (still in stone form due to a kiss from the Enchantress in the pages of Defenders), who manages to defeat Iron Man, Yellowjacket, and the Beast, before confronting Cap, the Wasp, and Jarvis in the kitchen—where Cap is trying to prevent a civil war from breaking out thirty years too early.

Cap shows he knows when immediate action must take priority over investigation and deliberation… not that it does him much good.

The Black Knight eventually falls to the Vision, the aftermath of which—and a subsequent fight between Vision and Wonder Man—we see in Avengers #158. This time, Tony gets points for the ethical insight (although I like to think Cap was thinking the same thing).

It’s a legitimate point: While I love the soap-opera aspects of team books as much as the next fan, there is a tendency for squabbles between team members to distract our heroes from, you know, being heroes

This issue also sees the introduction of the villain Graviton, who goes on to become a frequent foe of the team in its various incarnations. And he really debuts with a bang, using Cap’s mighty shield against him, 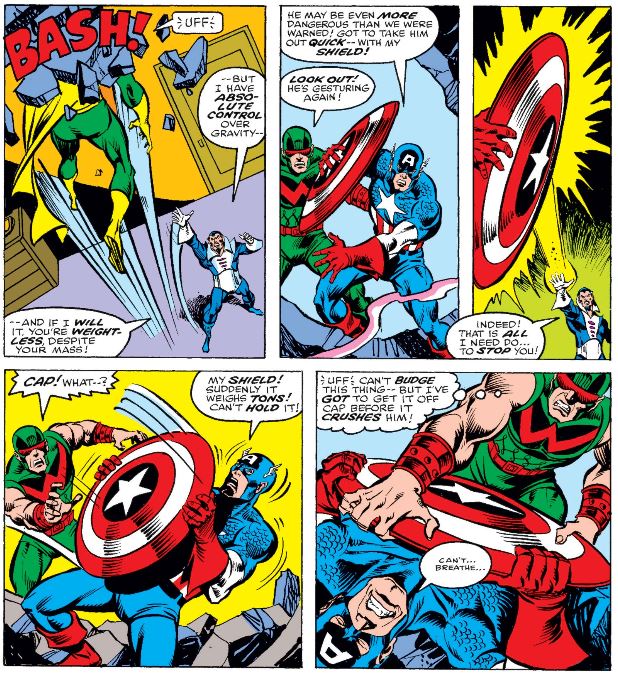 …only to be freed with the help of returning members Black Panther and Thor, after which the team gets their defiant on, Cap included (although I think Wanda shows him up this time).

After the battle is over, we learn who the true hero is (acknowledged, among others, by Cap himself, of course). 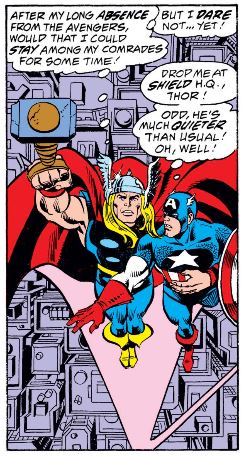 In Avengers #160, Thor leaves, giving Cap a lift—and a chance to realize that something’s bothering his old friend. The rest of the issue deals with the Grim Reaper, his brother Wonder Man, and the Vision, who shares Wonder Man’s brain patterns, as they sort out their family issues.

Cap returns in Avengers #161 to face an out-of-sorts Hank Pym, now back in his Ant-Man outfit for some mysterious reason. (I am devoting a little more time to this issue, not because of relevance to Cap, but because I find Hank’s struggles with mental illness fascinating, which has become part of his legacy, as explored recently in the context of his daughter, the new Wasp.)

But we start with an important lesson: Always let Janet design your costumes. Not the Beast. Never the Beast. 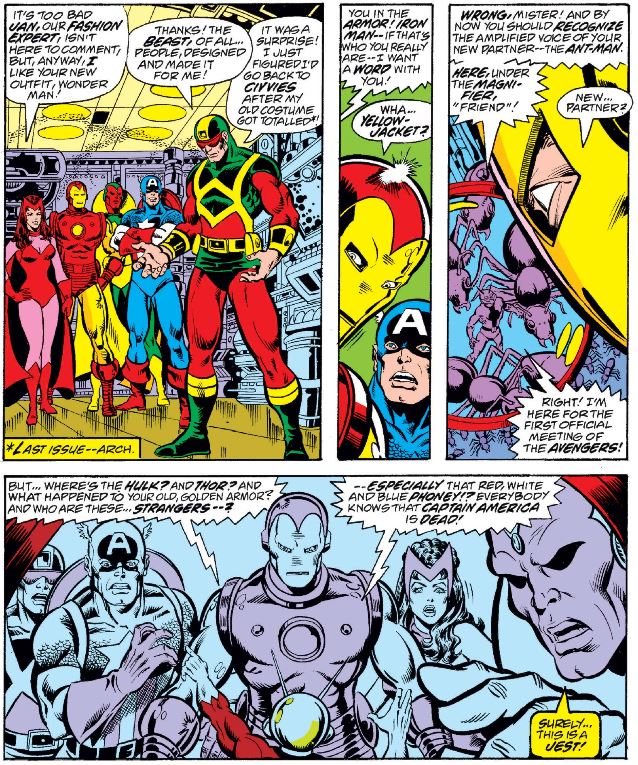 You may suspect that Hank is a version from the past who does not remember anything since Cap was found frozen in Avengers #4, but the truth is much worse.

Hank is keenly aware of the fatal flaw in Tony’s armor (which might explain his shift to in-helmet displays, as seen in recent comics and the films).

You have to appreciate that Hank is so protective of “Cap’s legend”!

Once the other Avengers finally subdue Hank, Janet explains what led to his breakdown. 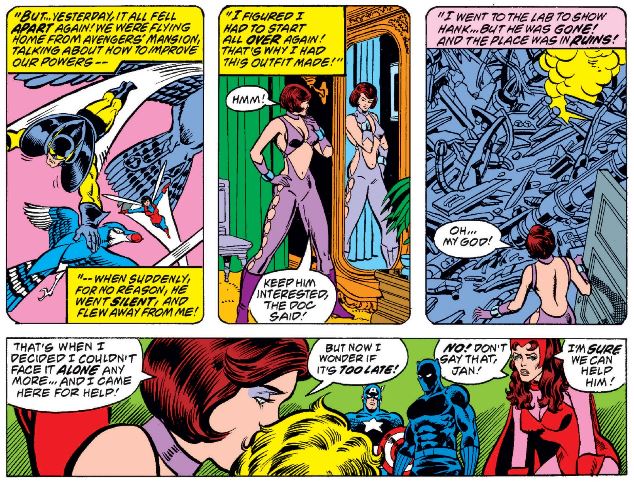 Below, both Cap and Tony question the Beast’s joking, citing the ancient legal doctrine of “there’s a time and place.” (To his credit, the Beast apologizes again to Janet later after the two leave to pick up some of Hank’s things to jog his memory.) 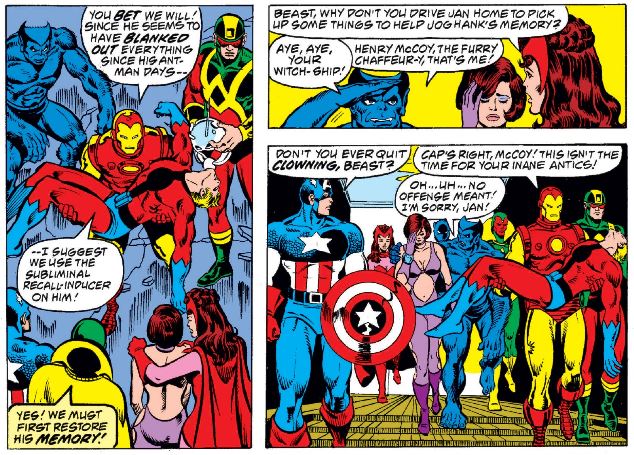 While the Avengers are trying to help Hank, Ultron bursts in, having already abducted Janet at her home, and attacks the rest of the Avengers. The Scarlet Witch fares the best against him (as she also did in the film Avengers: Age of Ultron)… 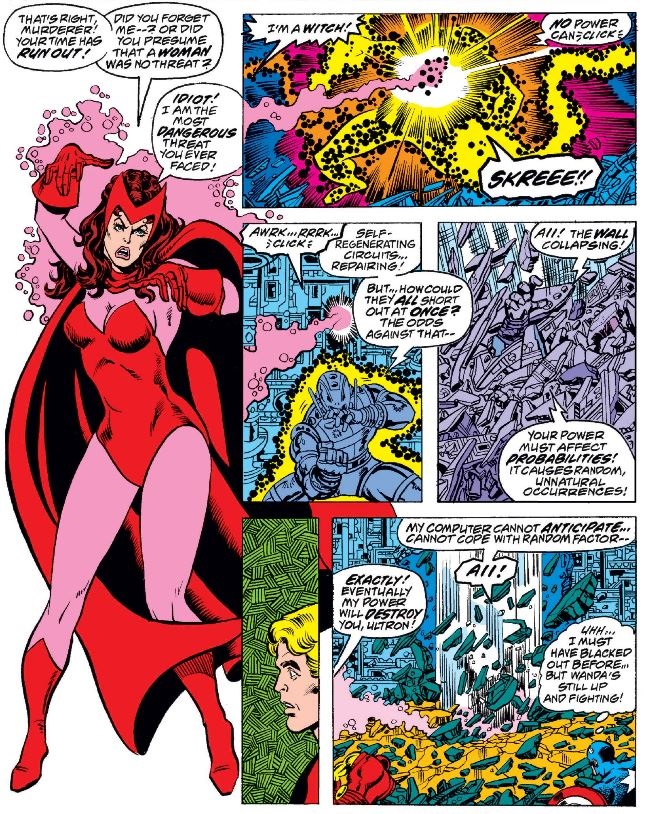 …until Cap nobly but unwittingly stumbles into the middle of their battle, distracting Wanda and handing Ultron the win.

As Avengers #162 opens, we see Cap’s one and only appearance in the issue, being placed in an ambulance. (At least the fella in the brown jacket cares!) 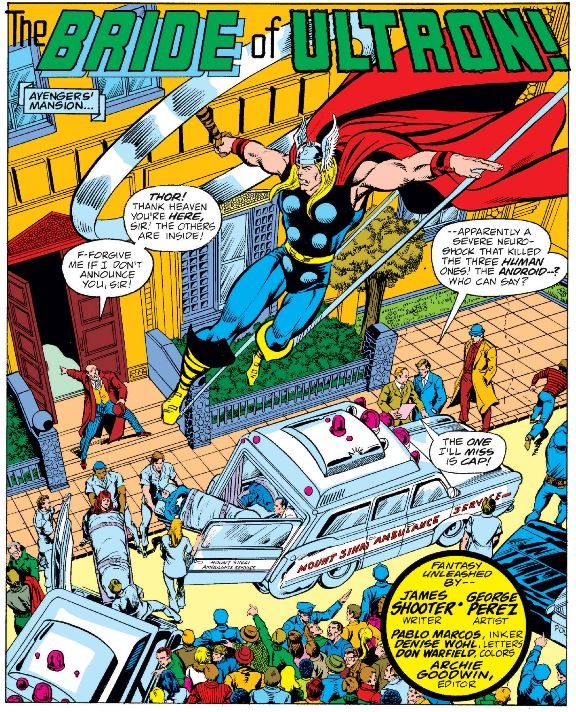 And just to let you know what Ultron’s plan is…

Yes, Hank Pym’s Frankenstein monster is creating a wife for himself, based on the brain patterns of his “stepmother.”

I’d tell you what happens in the rest of the issue (if only because it introduces a major character): Ultron does begin transferring Janet’s mind into the android, and even after the Avengers arrive and interrupt the process, enough of the transfer has occurred to create Jocasta, who will later become an important character in the Avengers canon and other books (including the 2018-2019 storyline in Iron Man’s book, which touches on the ethical status of AI). 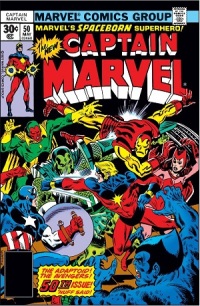 Also during this period, the Avengers showed up in issues #50 and 51 of Captain Marvel’s book, where they fight the Super-Adaptoid, the power-duplicating android who first fought the team way back in Tales of Suspense #82. In issue #50, after fighting Iron Man, the Super-Adaptoid goes to Avengers Mansion to face the rest of the team, and we get a very nice pseudo-3D effect with Cap’s shield, courtesy of artists Al Milgrom and Terry Austin.

Before long, Mar-Vell—”Marv,” to Cap, apparently—shows up, and we see that the Captains work together well.

By the end of the issue, Mar-Vell defeats the Super-Adaptoid by using his Nega-Bands—which normally allow him to switch places with Rick Jones in the Negative Zone (kinda like saying “Shazam!”)—to instead send the android there, and bringing Rick back for good. As we see in issue #51, Rick now faces a normal life for the first time in years, including an offer from his old partner, Captain America. 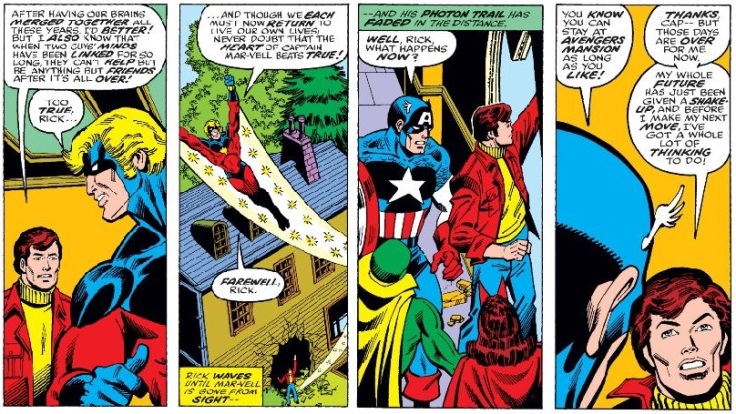 From Avengers #161: When Janet detailed her husband’s feelings of inadequacy and insecurity, she conveniently left out the framed portrait of super-genius Reed Richards hanging in their house.