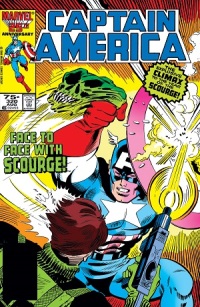 This issue concludes the three-part “Scourge of the Underworld” storyline, as Captain America finally comes face-to-face with the man who’s been killing villains across the Marvel Universe (and in many titles) for the past year. (See the post on issue #318 for more background on the Scourge concept.)

However, we open with Cap facing off against someone else… Is it Hydro-Man, the Spider-Man villain? The Immortal Water Fist? Or maybe Zan from the Wonder Twins? 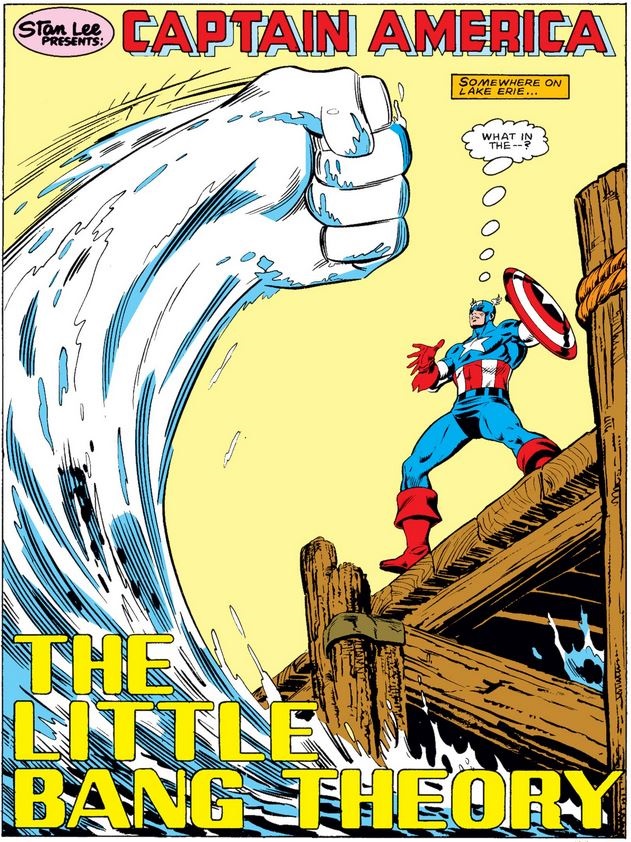 After the fist absorbs him and carries him skyward, Cap finally gets his chance to play Sub-Mariner. (“Imperius Steve!”) At least it’s cool, refreshing Lake Erie water, as clean and clear as… well… hey, it’s better than the Hudson River! 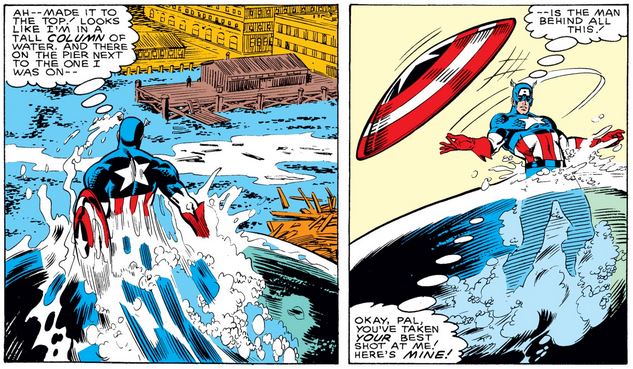 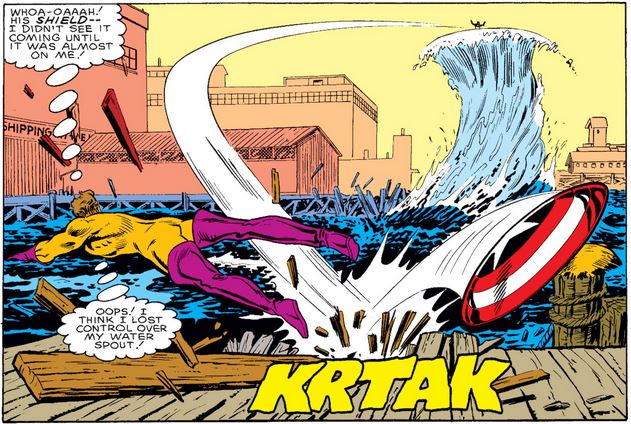 Look at that dive… he has been watching Namor. 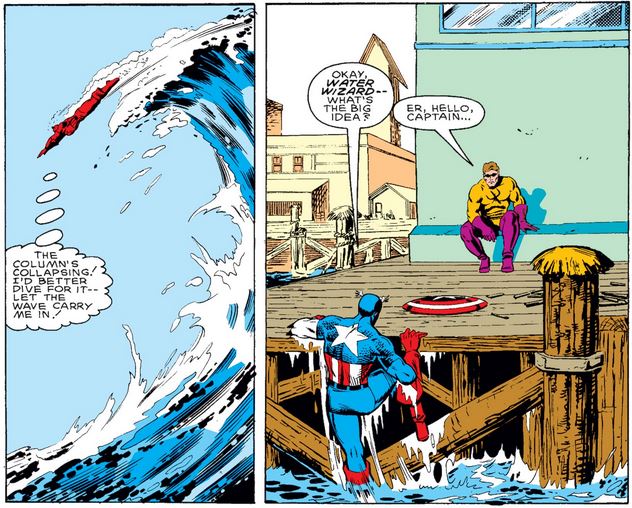 Water Wizard, right… I would have guessed it eventually. (Maybe.)

Turns out Mr. Wizard has a method to his madness, for which he apologizes…

…and then leads Cap to the Bar with No Name, the criminal hangout where the Scourge killed eighteen wrongdoers at the end of the last issue. Water Wizard begs for Cap’s protection, but sells him short: He should realize that Cap doesn’t need to be convinced to help criminals facing danger themselves.

When the authorities arrive on the scene, Cap tells them almost everything, employing restraint that he justifies based on having to balance the principles of being forthcoming with the police and keeping his promise to the Water Wizard. (Not the most earth-shattering of moral dilemmas, to be sure, but Cap is still conscious of the judgment that he has to make.) 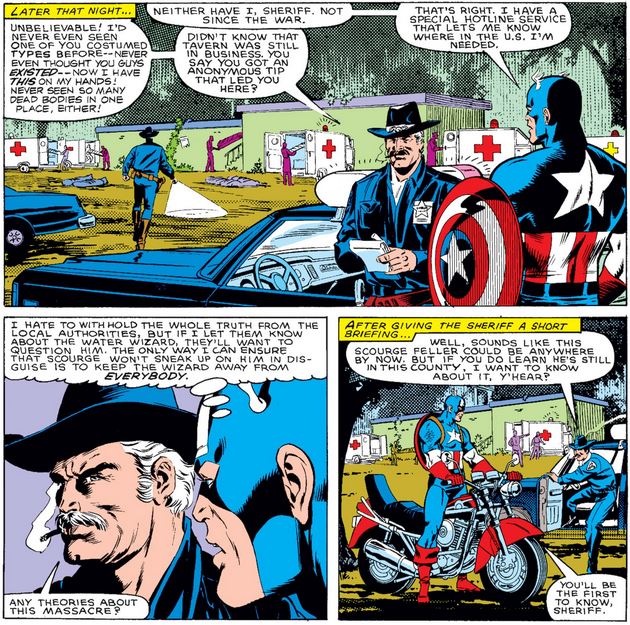 And another part of that promise is checking in to make sure his charge is safe. 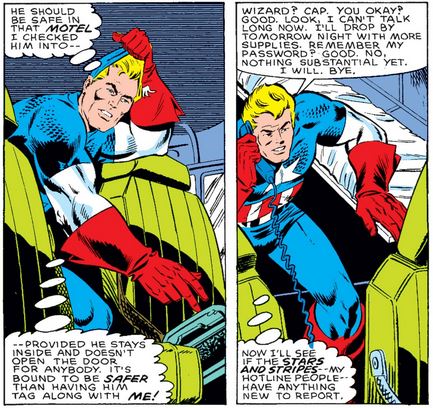 Cap comes up with a plan to trap the Scourge, using himself as bait. 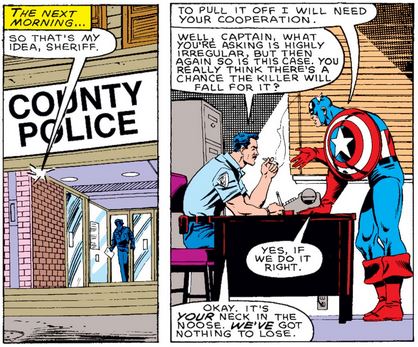 It also involves more than a little subterfuge, with which he is famously uncomfortable—and this time it means giving false information to the media as well, specifically to leak to the press that one criminal, Mirage, survived the massacre at the Bar with No Name, so Cap can pose as him. As before, Cap justifies this in the name of a greater cause, making his thought process explicit. 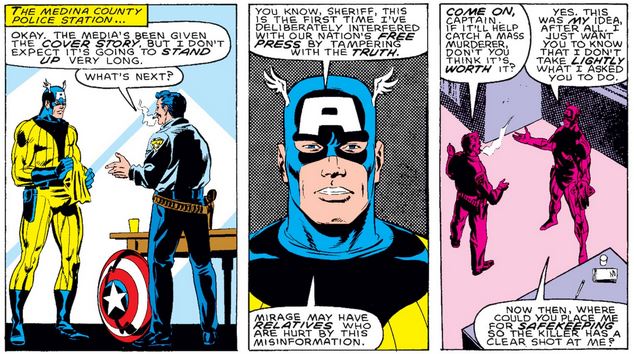 Cap hides in a nearby hunting lodge, and while he waits for the Scourge, he gets a little work in. (Even his work habits are admirable!) 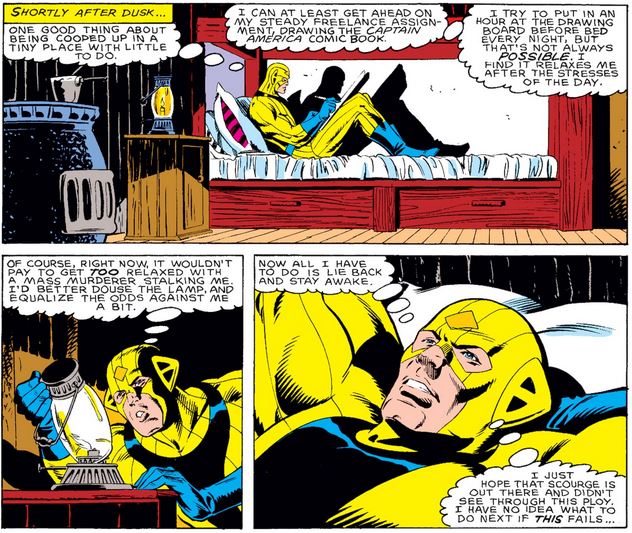 Even as he considers the possibility that his plan will fail, a spray of gunfire tells him it didn’t. 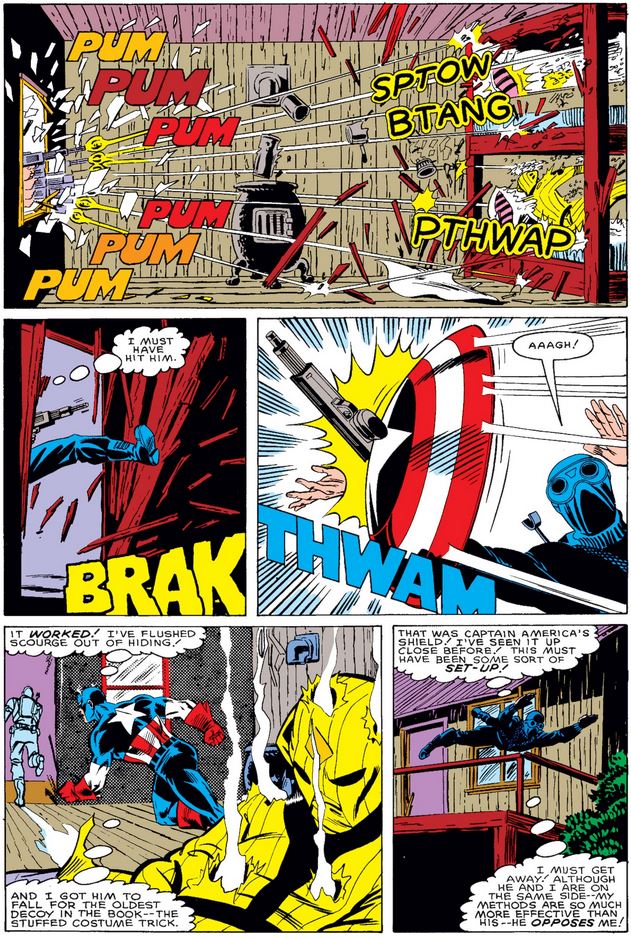 Like the Punisher, the Scourge feels a kinship with Cap, thinking that they both fight the same war, and is surprised that Cap disagrees with his methods. This naturally creates a conflict for the Scourge, who considers Cap an obstacle but also an ally. 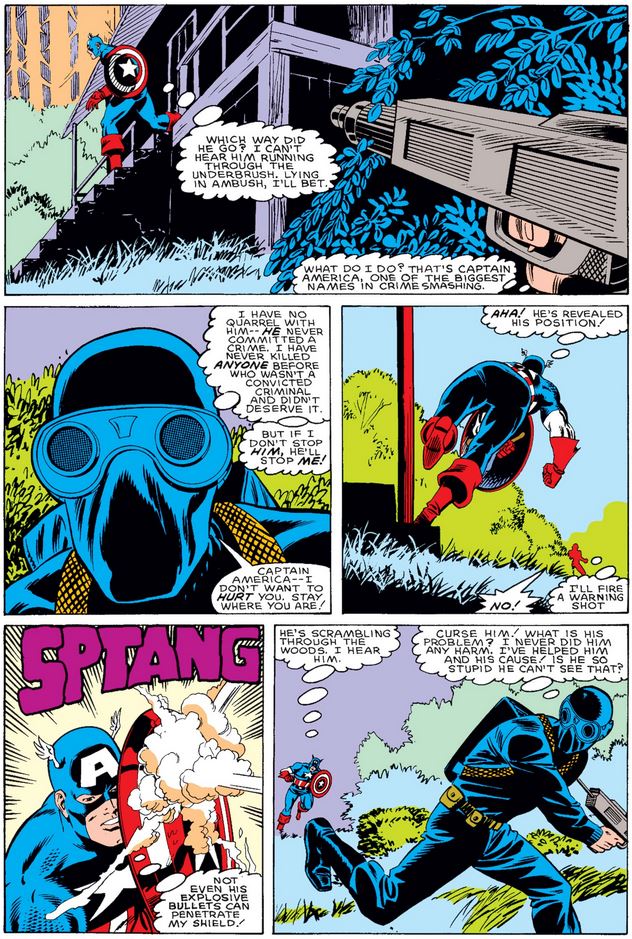 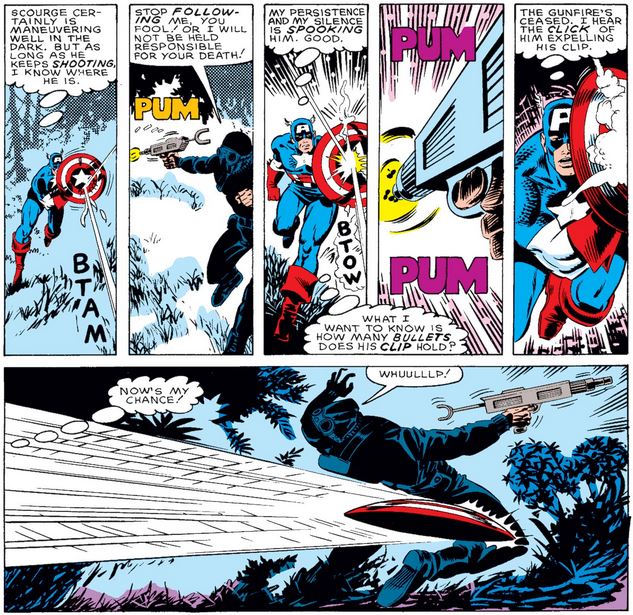 …but underestimates his foe. 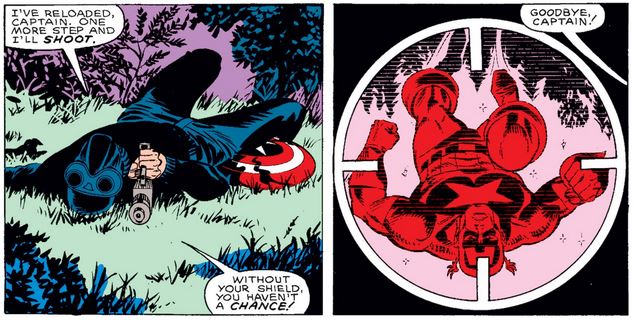 The Scourge’s inner conflict about killing Cap gets the best of him, though…

…giving Cap a chance to subdue him, and also gives the Scourge a chance to defend his methods to Cap. 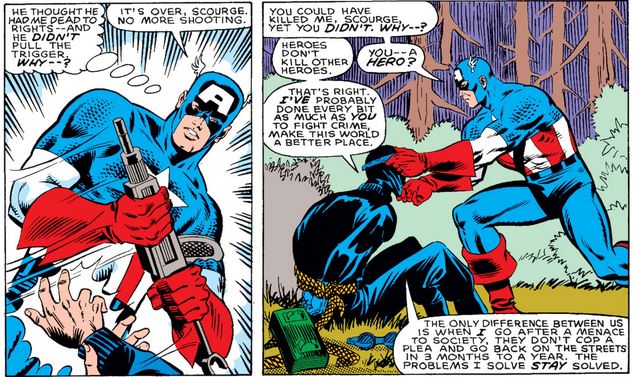 Cap asks the standard “judge, jury, and executioner” question, and the Scourge denies the first two and embraces the third, but without explaining why all convicted criminals deserve to die, which is contrary to the concept of proportionality at the heart of most philosophies of punishment.

Before Cap can press the issue of why it falls on the Scourge to exact this punishment when the state already rejected it—but not before the Scourge tells his origin story, including killing his own brother after he adopted a life of crime—a mysterious shooter turns the tables on the murderer, forcing Cap into another dilemma, which he frames in terms of following the Scourge’s principles or his own (which is really no choice at all). 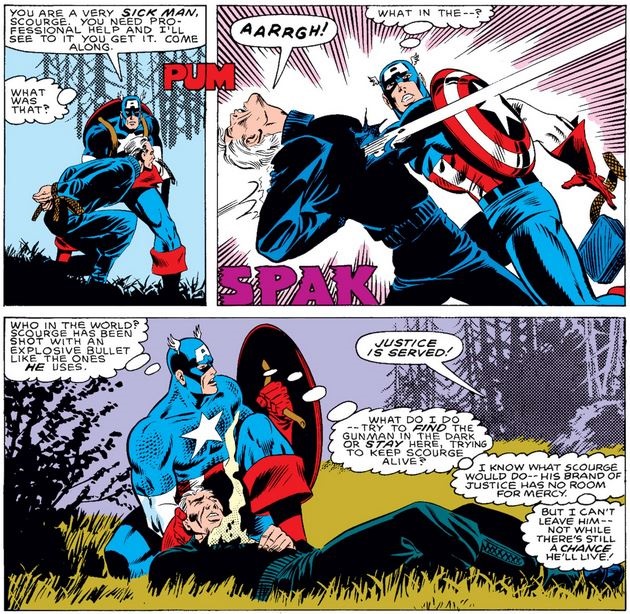 Like a good detective, Cap considers all the possible explanation for this latest murder, and the last one is definitely the most worrisome. 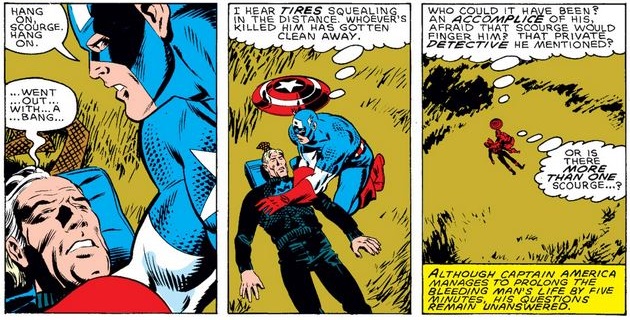 Could there be? We shall see…