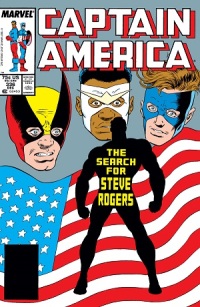 After three issues without his presence (but not without his influence), Steve Rogers returns to his title, as he chooses what to do with his life now that he’s longer Captain America. Meanwhile, his Partners Three, shown in floating heads on the cover, band together to look for him as well. (Does anyone remember the last story titled “The Search for Steve Rogers“? Different type of search this time, but still—don’t wear it out!)

After a TV report on (the new) Captain America’s ongoing fight against the terrorist Watchdogs—with “some people” wondering how Cap always knows exactly where they’re going to strike next, unaware that the government Commission he works for sends him there—the anchor talks about Brother Nature, an “environmental saboteur” who has the loggers in one Washington state bar quite upset. 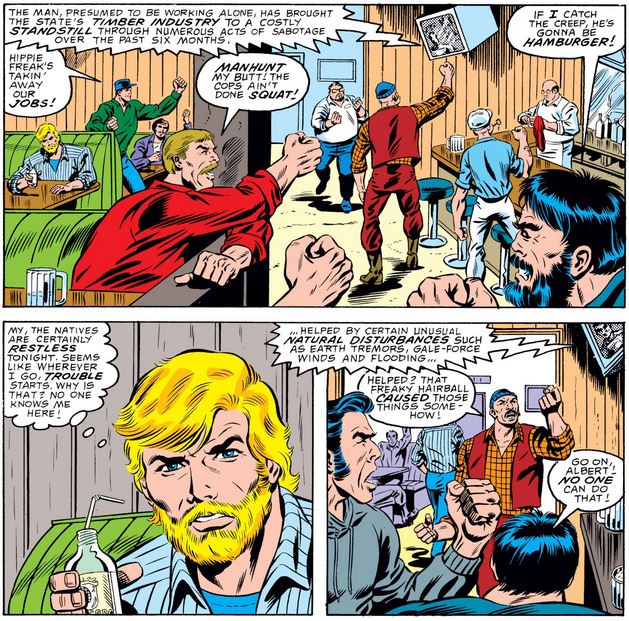 No one knows you at all, scruffy sir—holy cats, that’s Steve Rogers!

Whoever thought he would go into hiding, on the run from the government, only to resurface with facial hair? Why, that’s crazy! That would never hap— 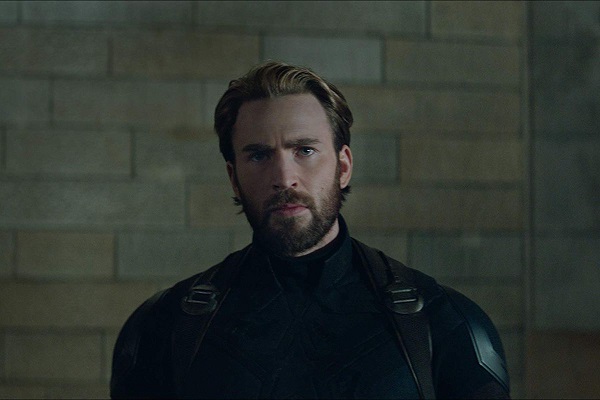 Before the loggers can confront the park rangers, who they assume are harboring Brother Nature, Steve steps in and delivers a lesson in basic civics. (That must have felt good.) 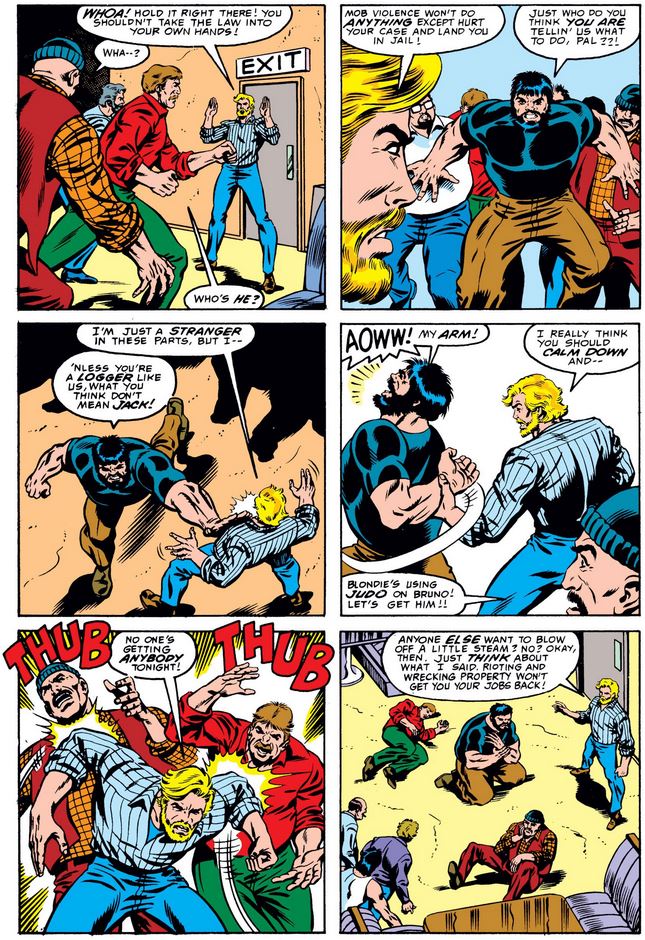 (That looks more like aikido to me than judo, but I’m no E. Paul Zehr.)

Steve leaves the bar, rehearsing his “if I see a situation pointed south, I can’t ignore it” line from Captain America: Civil War, and reflects on his state of mind since leaving his name, costume, and shield in Washington, DC, months ago—especially now that he’s seen his replacement on the news. 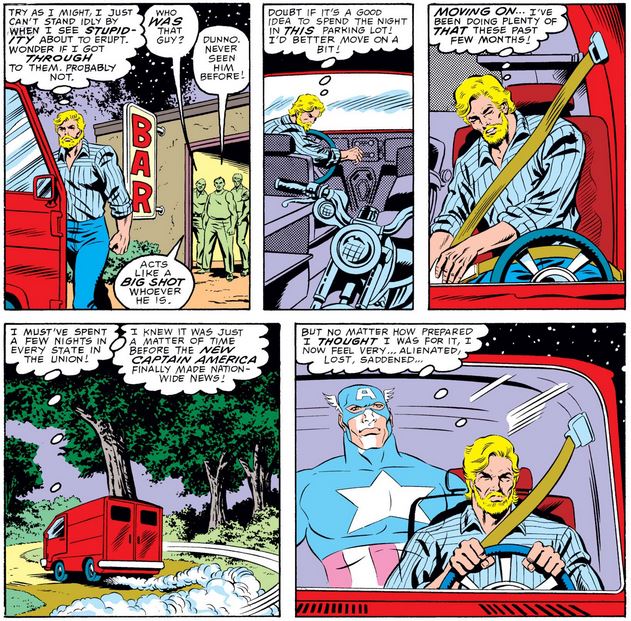 He summarizes issue #332 very concisely, remembering how difficult it was to give up the mission he’d lived for since he took part in Project Rebirth…

…and reiterates his focus on principles over politics, as well as how he’s become so much more than a super-soldier since coming out of the ice all those years ago. 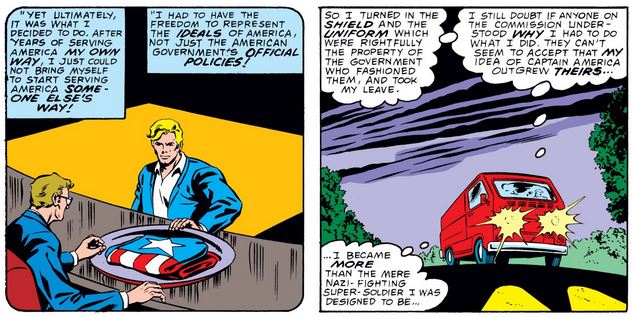 Although he couldn’t get hold of his ex, Bernie, by phone in issue #332, he stopped by for a chat on his way across the country. (I wonder if he stayed for the weekend? You know, a weekend… at Bernie’s… forget it.) He explains that he can’t imagine giving up being a hero but isn’t sure how to go about it, and bless her, she launches into full-on lawyer mode. 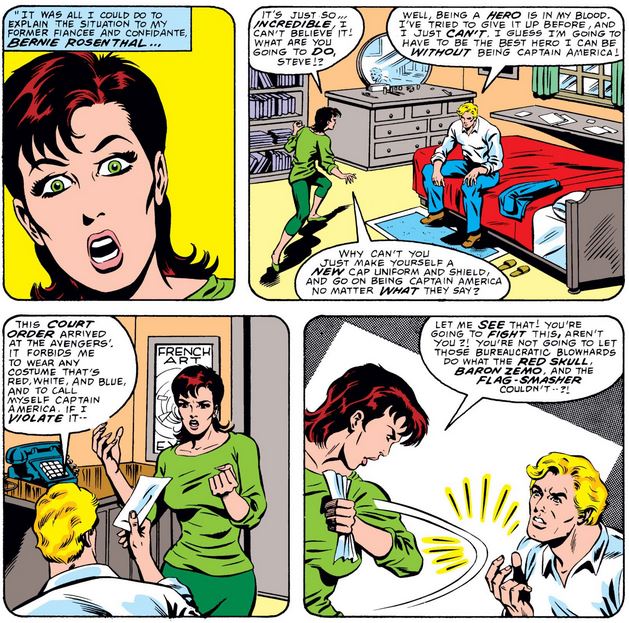 Steve shows his naive, trusting side, especially when it comes to authority—never mind the entire Secret Empire experience—and Bernie tries to snap him out of it, so he flips to the other extreme.

There is a way to challenge the government within the law, as Bernie explains, which it turns out he already has someone working on—but he balks at going public about his situation, in part to protect the institution of government itself (even if certain agents within it are corrupt). And then she plays the ultimate card… ouch! 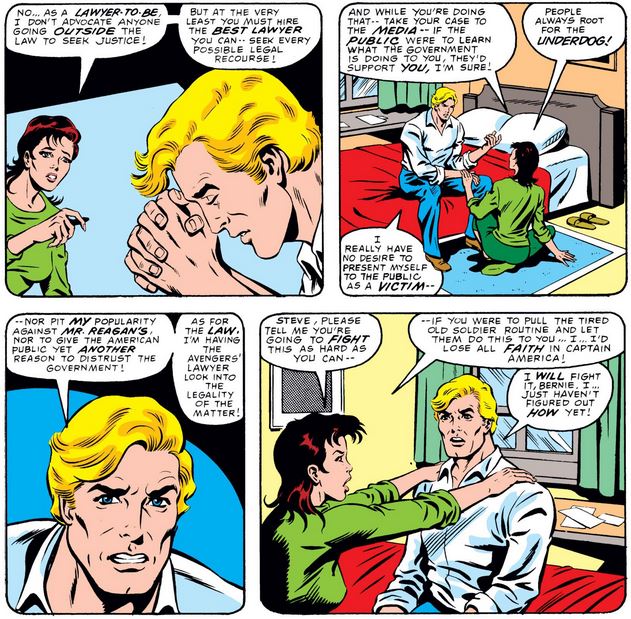 Before they parted, I can only assume they discussed their relationship, given that Steve remembers the conversation as having been with his former fiancée, which hadn’t been settled before.

Next he remembers what his three buds each said, with Sam and Jack drawing on their respective formative time periods—but giving fairly similar advice about standing up to the Commission—while Dennis just wants to run out the clock… 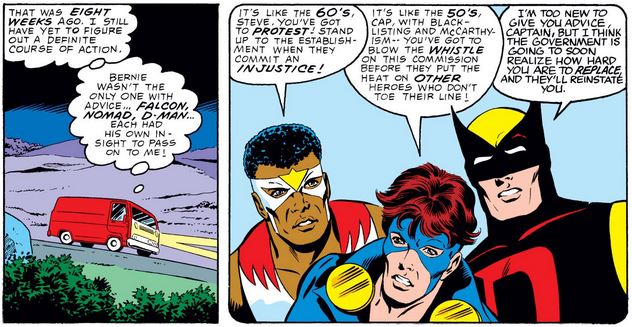 …advice so helpful that it made Steve give up on the whole enterprise! We also learn that he stopped his penciling gig for the in-universe Marvel Comics, which he’d had since issue #311.

Steve and the Big Red Van end up in that crevice in the road, and while he works out a way out, let’s check in with his pals, who have gathered at D-Man’s lavish house and get him to fess up about his personal fortune and taking over Cap’s hotline after Sam turned it down. 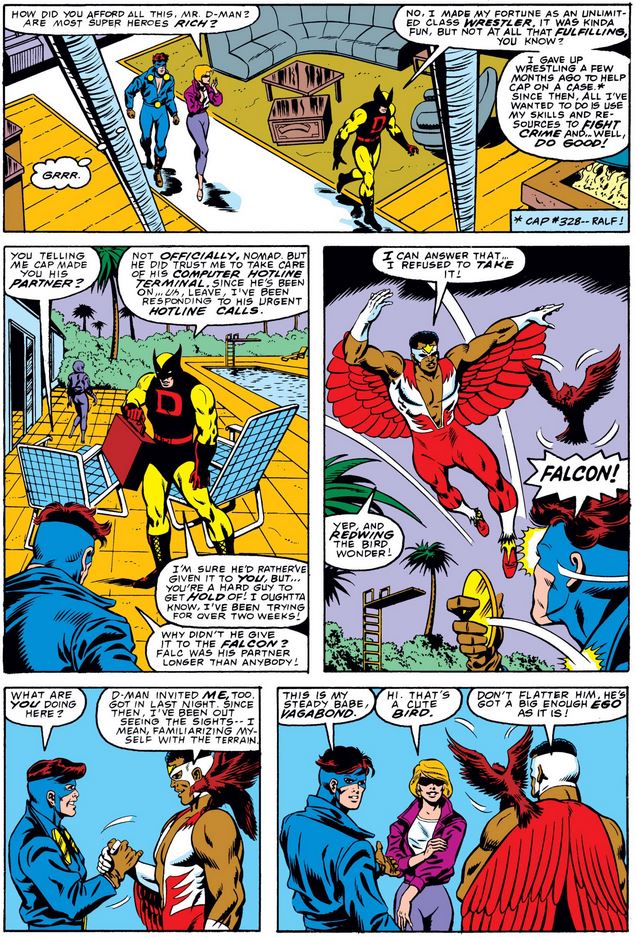 Back to Steve: After driving his motorcycle out of the van and up the wall of the crevice, he comes face to face with Brother Nature, who is like totally bummed out about Steve’s ride, man…

…before taking credit for the crevice itself, which clues Steve in as to whom he’s talking to. 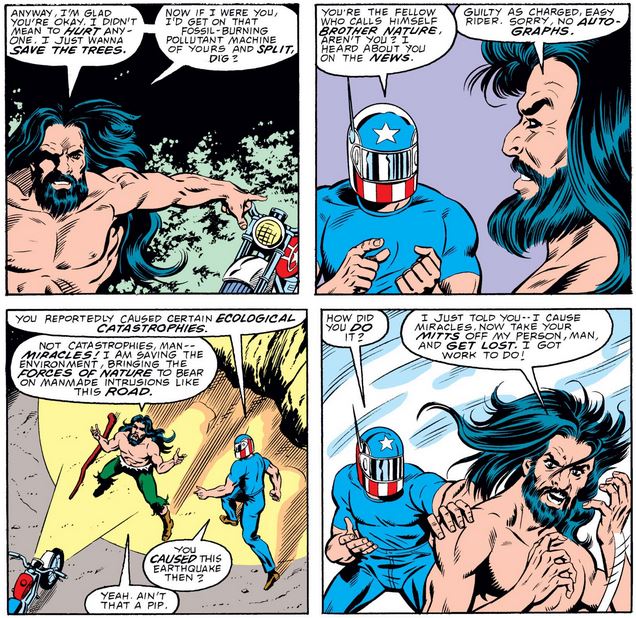 Brother Nature whips up a windstorm to cover his escape, and Steve launches into pursuit before he wonders why… and then remembers. (Shortest existentialist crisis ever.) 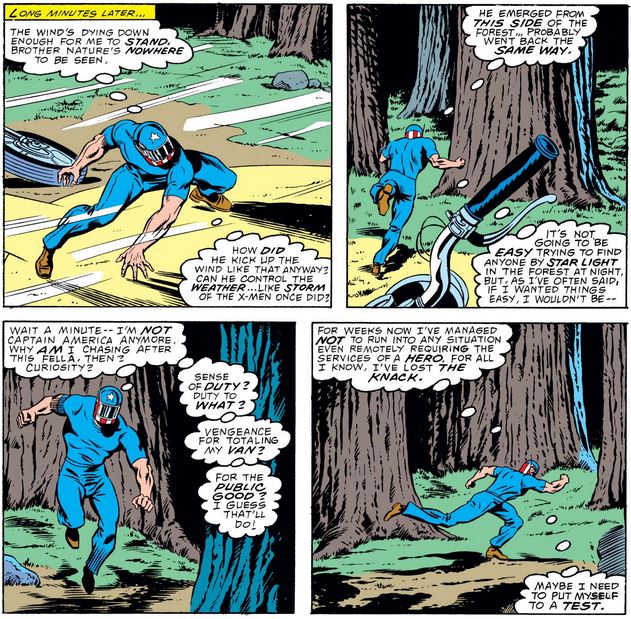 “I’m the new sheriff in these here parts,” he says (basically). (And “Easy Rider,” really? There hadn’t been another motorcycle movie since 1969? At least he could’ve called him “Ponch.”)

After Brother Nature sends the deer after Steve, who makes a “vaulting bucks” joke (similar to pommel horses in gymnastics) before he almost announces himself as Captain America, before catching himself and shortening it to simply “The Captain.” And a new superhero identity is born!

Brother Nature ends up hoist by his own petard when he falls in the crevice he made, and when he comes to he’s surprised that Steve didn’t kill him when he had the chance—at least until he finds out what “the Captain” is short for, which leads to sharing his life story… 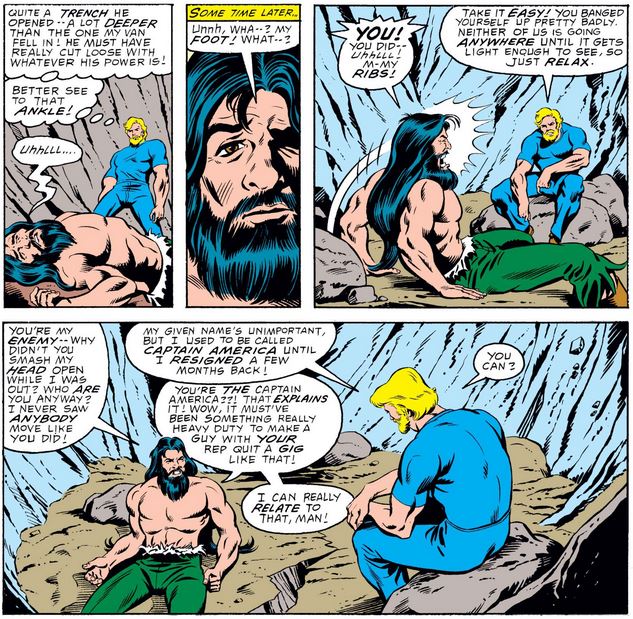 …being a park ranger who tried to fight the logging industry in the courts but ended up sabotaging their business instead, after which they dumped him in a ditch and buried him alive. And then…

Steve draws an interesting parallel between the ideals each man serves—and note that he doesn’t dismiss his extralegal methods too quickly.

As he climbs with Brother Nature out of the crevice, he considers whether he should do the same, but without considering the difference between the two men’s ends, which is essential to determining if they can ever justify the means. (In other words, lawbreaking is justified in some cases but not others; the reason the law is being broken must be weighed against the lawbreaking itself, and should be based on some more important principle, such as saving a life.) 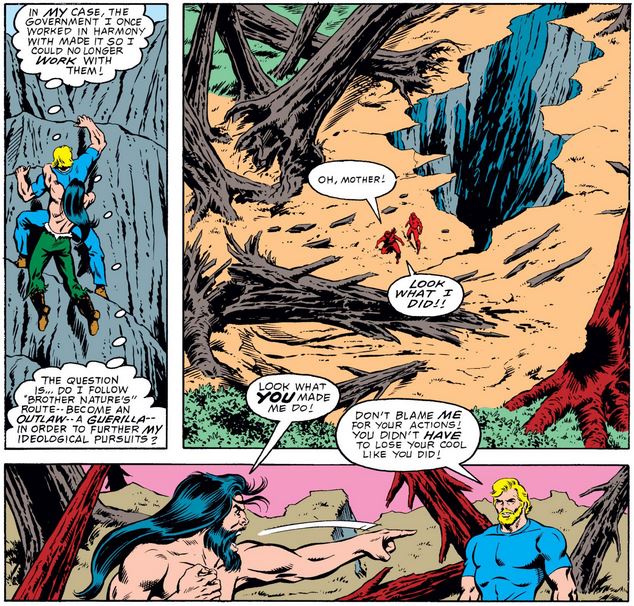 Steve explains that even in justified cases of civil disobedience, one has to take responsibility for one’s actions, and then uses a slippery-slope argument against breaking the law (two ideas we’ll see him cite again in the next issue). 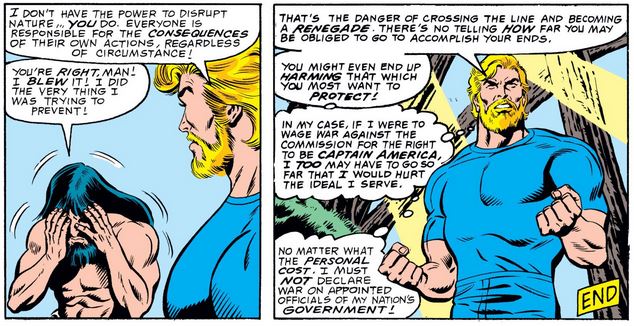 Note he doesn’t address lawbreaking per se, but only swears not to “go to war” against the government—and there’s a lot of space between those two options!

How far does Steve go? Keep reading and see!