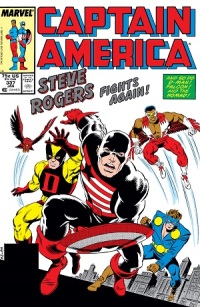 After the last issue debuted Steve Rogers’ new hero identity, “The Captain,” this issue reveals his new costume, shown on the cover to the right, itself an homage to Cap’s first modern appearance in Avengers #4. We also see Cap pushed even closer to the side of lawbreaking—and not because he’s almost violating the court order prohibiting him from appearing as Captain America or wearing the familiar costume.

The issue opens with the Partners Three finding Steve Rogers’ van, which changed colors from red to blue since the last issue. (We don’t know why, but we do know it can do that, as revealed in issue #318—so where’s my No-Prize, huh?) After D-Man tosses it out of the crevice in which Steve left it last issue, the three discuss what they’ll say to their friend when they find him. Jack focuses on his options to remain a hero (and also schools D-Man on the history of the name “Nomad”) while Sam is more concerned about what tomfoolery went on in Washington D.C. that led to this debacle, and fighting back against it. 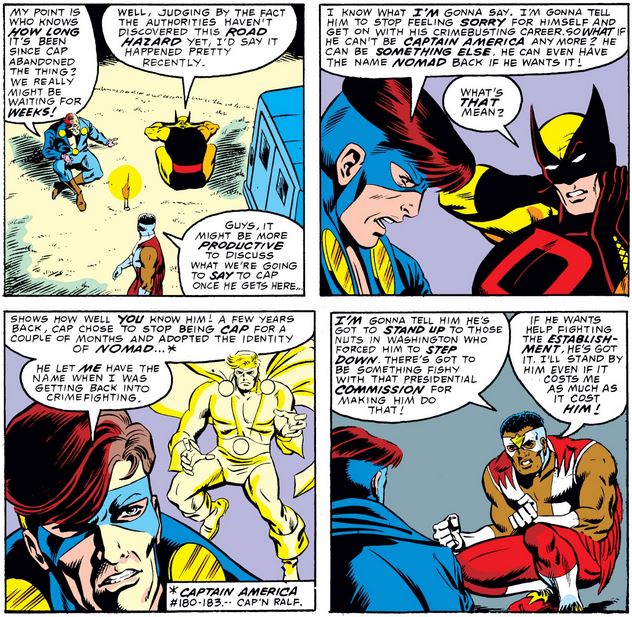 D-Man pledges his wrestling fortune to Cap, and I think Jack’s just playing with him with his “objection.”

Redwing warns them of a new arrival…

…who makes quite the entrance. 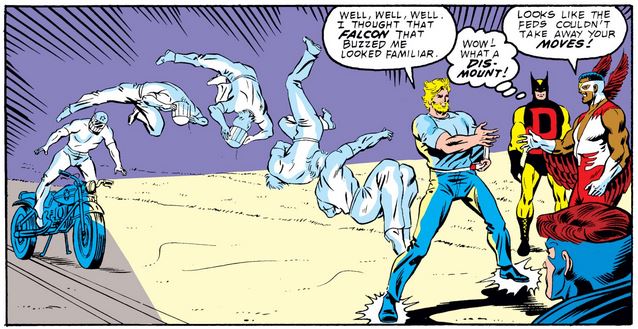 The four friends catch up, with Steve updating the others last issue’s encounter with Brother Nature, a classic bad patient, and Sam ribbing him about his beard… 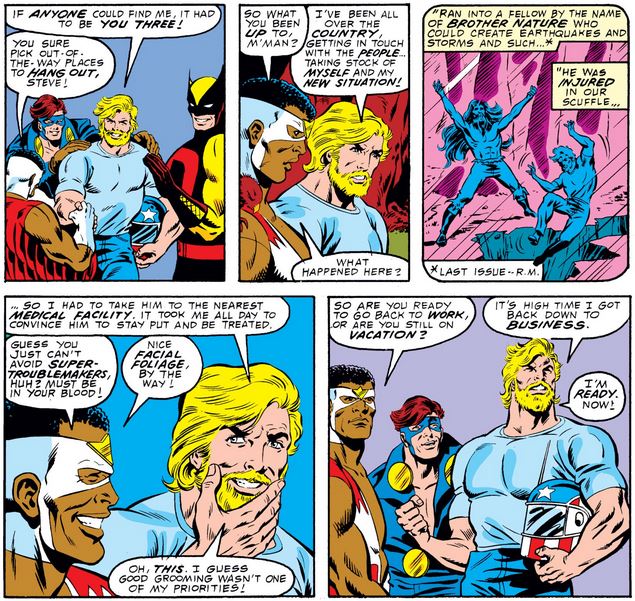 …until it’s time to get back to work. (If the dialogue didn’t make this clear, the fist pump really drives it home.)

Steve explains why he doesn’t want to be Nomad again, glancing toward the difference between the current situation, in which the U.S. government has rejected against him but did so legally (as far as he knows), and the Secret Empire story, in which the highest levels of the government turned out to be corrupt.

He shares his new ID of “The Captain,” and D-Man has a gift to go along with it. 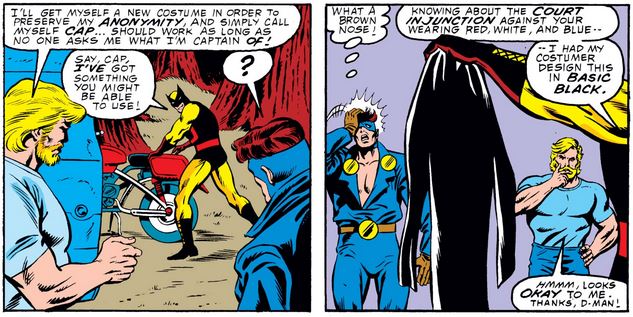 Sam makes good on his word earlier and urges Steve to go to Washington, DC, and fight back against the Commission, but Steve stresses that, while things seem shady, and are definitely wrong as far as he’s concerned, what the Commission did is on the level legally, and he responded in kind—and will continue to do so until it’s time to do differently. (Thank you, Roadhouse.)

As the four (and Jack’s friend Vagabond) drive away in the Scooby Van, they hear a news report of four snake-themed villains knocking over a casino, and they jump into action—including the Captain in his new duds! 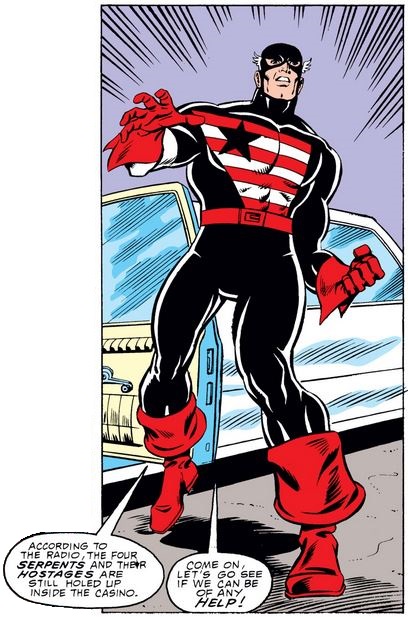 I guess it is different enough from his old costume, because no one recognizes him, much less any of his friends. After they’re kicked out, Jack asks the obvious question, leading Cap to consider the unthinkable, while Sam’s just offended. 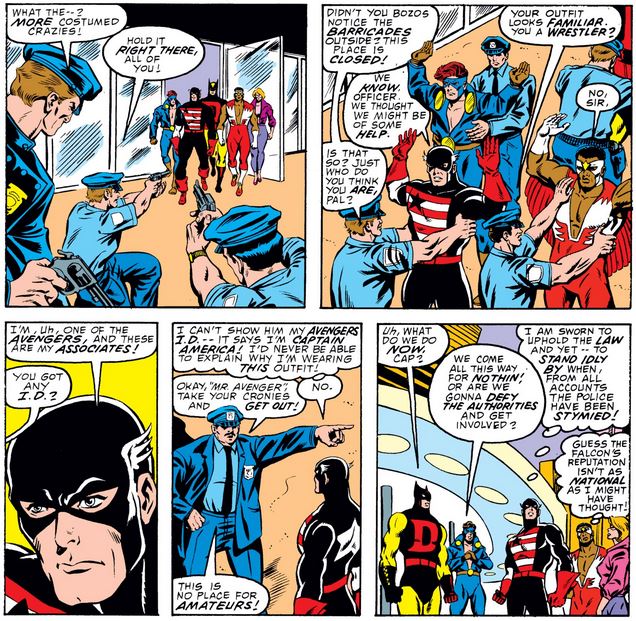 Too bad he doesn’t have time to call Spider-Man, who is more than used to being considered an outlaw. Of course, it’s one thing to oppose the police if they’re doing something illegal or immoral, but this is different: It’s entirely within their authority to control a crime scene and keep some costumed goofballs from interfering, even if you’re sure you can help. I don’t think this is quite the moral hill Cap wants to die on.

Nonetheless, once they learn that the crooks are on the top floor, Cap asks Sam to fly him up to the roof to get around the police—a move that Jack silently cheers, having crossed that particular line long ago.

Cap easily assumes command of the group, as is his wont. 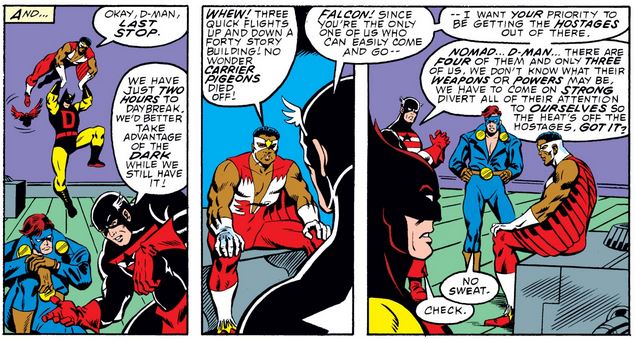 After Cap’s New Kooky Quartet break in through the skylight and start fighting the four wannabe Serpents, Cap realizes what he’s missing. 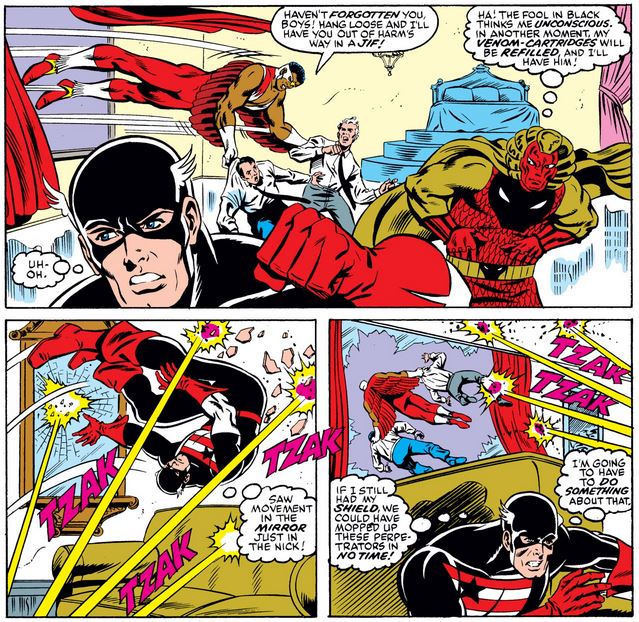 (We’ll see exactly what he does about that in the next post.)

After they finish off the Faux Serpents and Cap calls the police to let them know about it, he shares their reaction with the group, as well as his own discomfort with what they did. 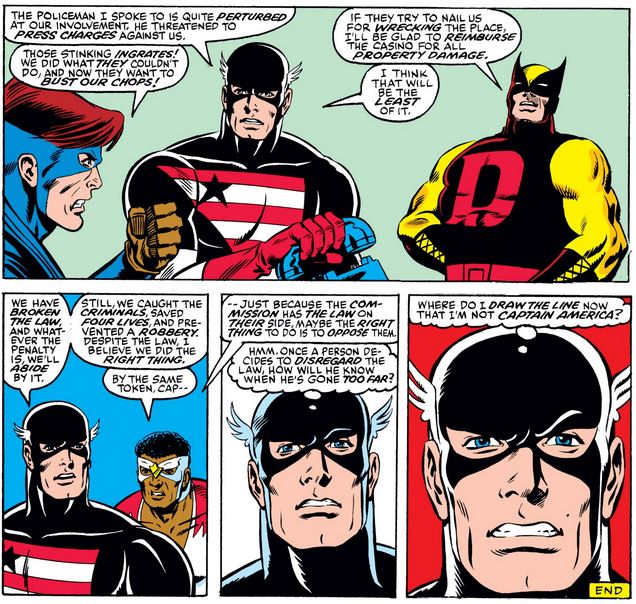 This is very dramatic but conflates a lot of issues. As I said before, the police did nothing wrong in keeping Cap and his friends from the crime scene—yes, in the end they caught the crooks, but they did violate the law to do it. (Like Cap said, he’ll accept whatever the penalty is, as we’ll see in the next post.) Opposing the Commission doesn’t necessarily have to involve breaking the law, though, only challenging it using official channels (most likely court). This isn’t disregarding the law as much as disagreeing with it and trying to change it, certainly a legitimate and patriotic act if ever there was one.

Finally, regarding his last question: He’s still the same man (and still Captain America at heart), with the same moral code and sound judgment. He’ll go on to challenge and even defy the law a number of times in the future, always with solid justification. It’s a sign of his humility that he worries he’ll succumb to the “taste” for lawbreaking once he starts… but I’m not worried.