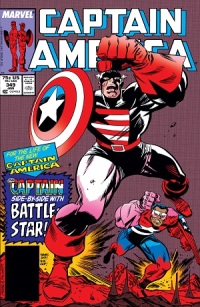 This issue of Captain America brings Steve Rogers and Lemar Hoskins together for the first time, and reunites Rogers with Flag-Smasher and ULTIMATUM, which only reminds him of the catastrophic events of issue #321… and all of this happens in the last issue before the pivotal #350. (Also, note the cover by Ron Frenz and Al Milgrom, an homage to the cover to issue #193 by Jack Kirby and John Romita Sr.) Plus, we see a brief scene from an issue of Iron Man after the conclusion of “Armor Wars,” in which Tony and Steve touch base on what happened, mainly in Iron Man #228.

The issue opens immediately after the events of Avengers Annual #17 (although the editorial footnote says #18), showing Cap taking a quick dip. (The new suit must be very stealthy at night, even in the moonlight.) 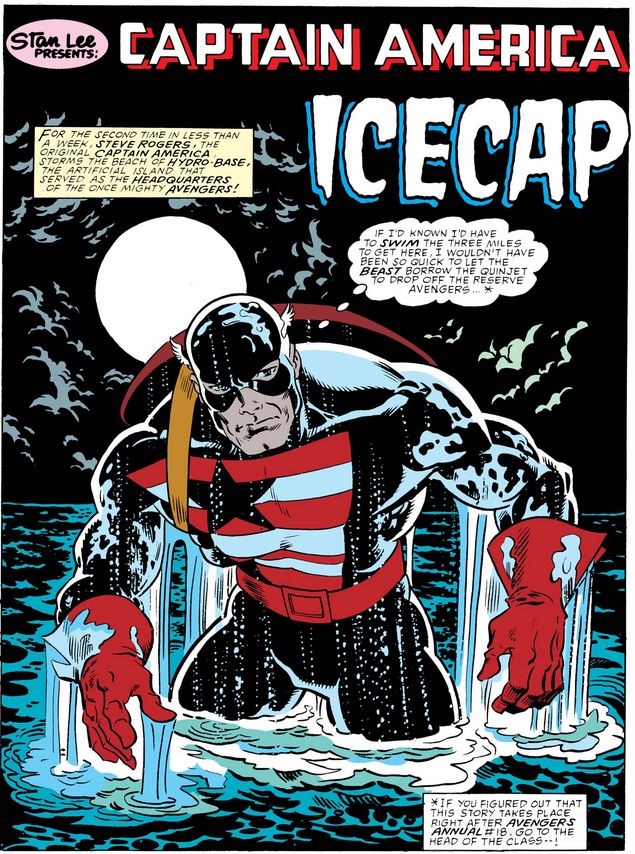 The Ironman Triathlon starts with just a 2.4 mile swim—so take that Tony!

Cap emerges from the deep wondering why the Avengers are no more, but also acknowledges he’s been out of touch (and probably hasn’t picked up his pull list in a while).

He sees the demolished headquarters on Hydrobase and links it, somewhat unreasonably, to his own “abandonment” of the Captain America identity, which we’ve seen him come to regret more and more over recent issues, as well as giving him a new resolve to reassemble some Avengers. 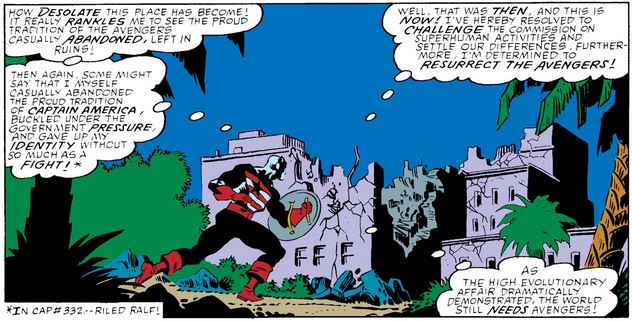 …by a welcome sight. After getting D-Man up to speed on the events of Avengers Annual #17, Cap invites him to be the newest Avenger. 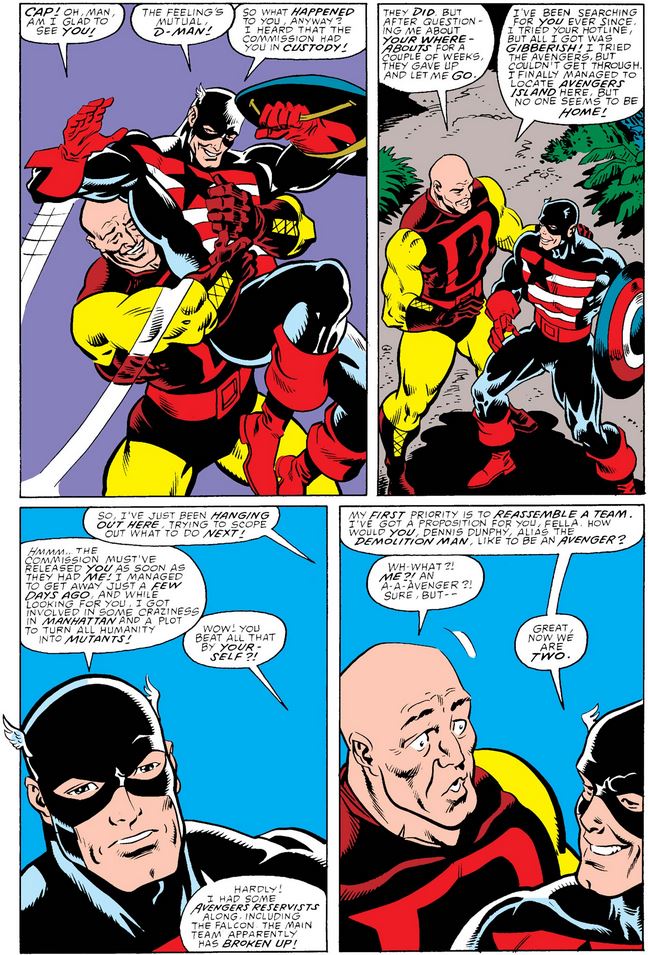 D-Man hardly has time to bask in pride before Lemar Hoskins shows up, and D-Man has a chance to return the “favor” of being subdued by Hoskins in issue #344. After Cap breaks them up with a toss of his shield, he and Hoskins get to know each other… 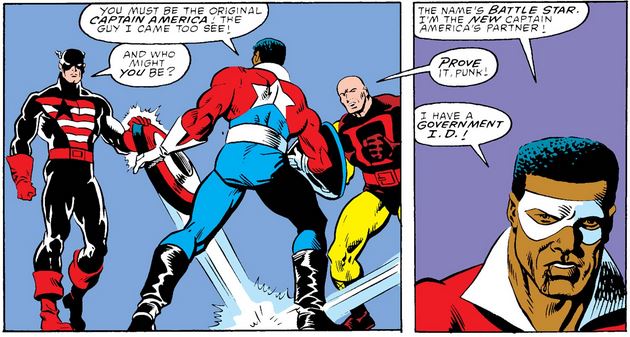 …before Hoskins reveals why he’s looking for Cap (which we know from the last issue). 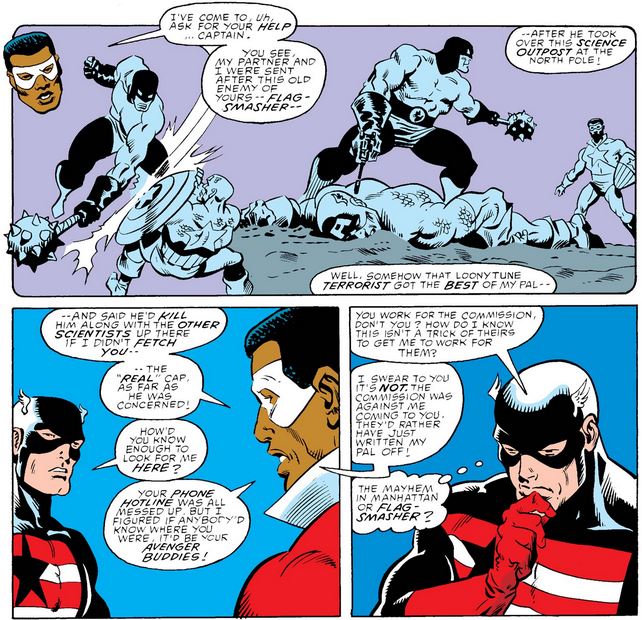 Cap is suspicious, due to his now-hardened distrust of the Commission and anyone who works for them, but he seems intrigued by the prospect of facing Flag-Smasher again—although he is also torn between him and the ongoing “Inferno” in Manhattan (which he dealt with a bit in Avengers #298).

Apparently having decided to go after Flag-Smasher first (and return to Manhattan in Avengers #299), Cap then asks Hoskins about his original name (which he rejected in issue #341) and whether he’s lived up to it. 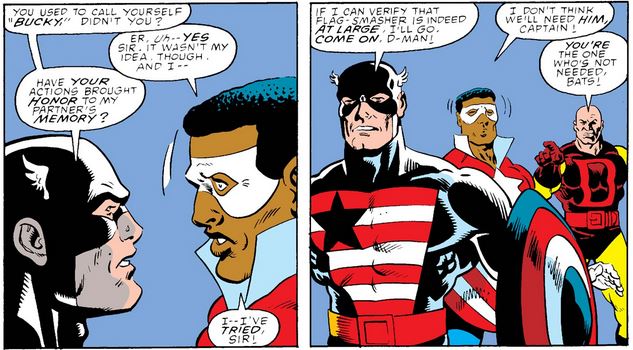 It may be a strange association, but the sudden sentimental turn Cap’s questioning takes  reminds me of a scene from JLA Year One (recalled from memory) in which an aquarium worker tries to ask a brash young Aquaman a question. He initially snaps at her, but when she finally asks, “Are they happy? The fish, I mean,” he instantly softens, takes a moment, and says gently, “yes, they’re very happy, and they feel cared for.”

When they arrive at Flag-Smasher’s location, our heroes find it under assault by ULTIMATUM agents, which in addition to raising the question why Flag-Smasher’s old crew is attacking him, also reminds Cap of the time he was forced to kill one of them, hardly a pleasant memory. 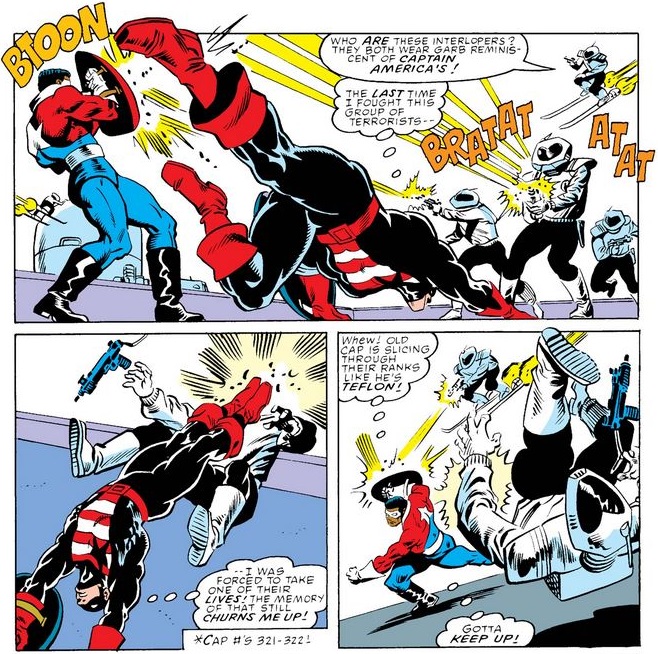 Cap’s powers of observation and quick reflexes save him once again, and he reflects on the benefits of counterintuitive strategy. 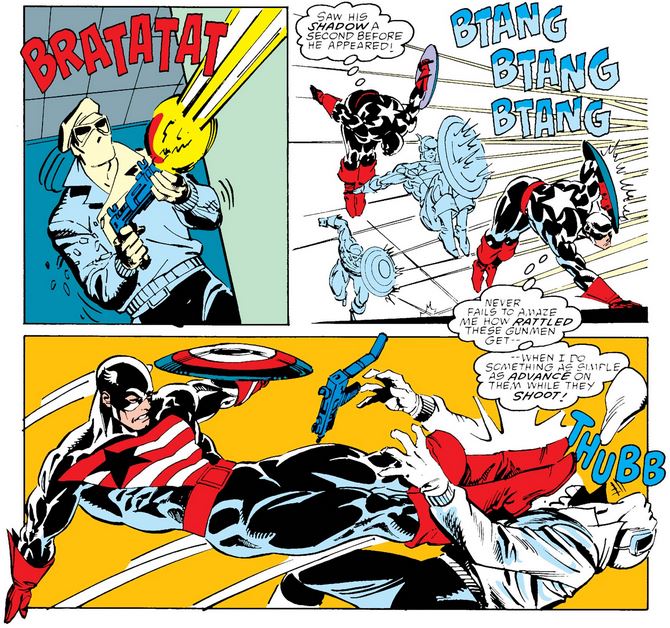 Cap easily takes out another ULTIMATUM agent with the flick of a wrist before he finds Flag-Smasher himself… and his long-lost BFF. 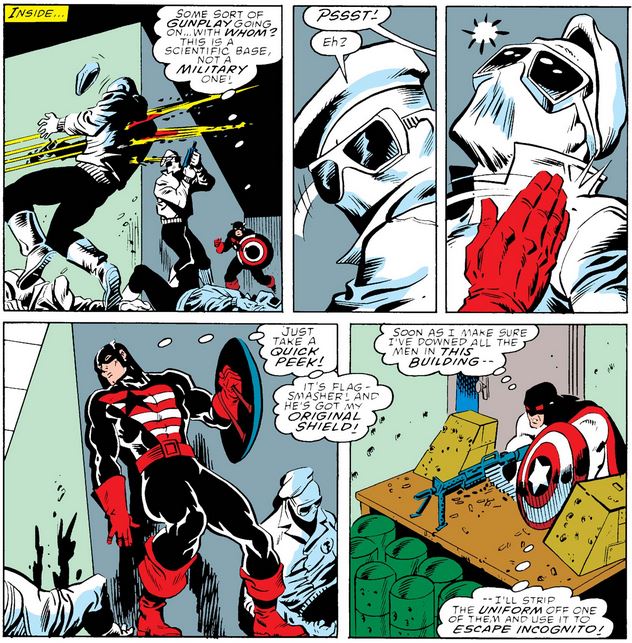 Flag-Smasher thinks it’s the real Cap—if not for those wild new threads—and he asks him a question only the real Cap could answer, oroviding Cap access to the next level of the game in which he learns a valuable secret. 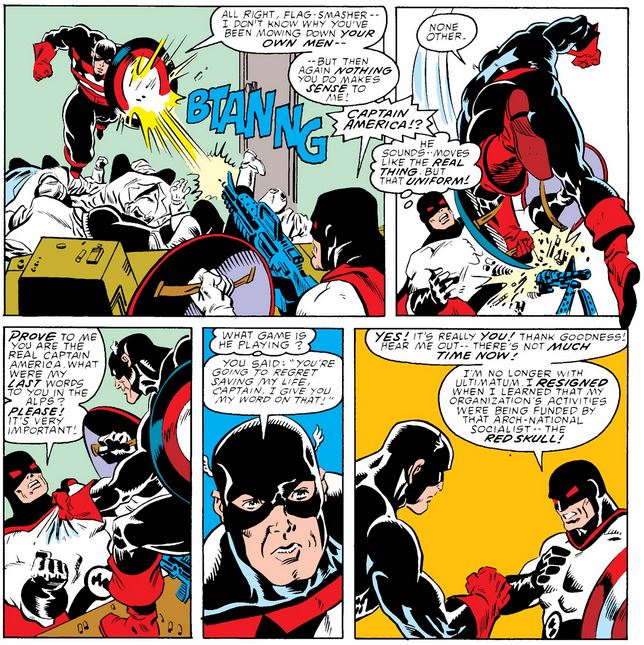 Cap can’t believe it could be the Red Skull—and recall that the 50s version was also killed by the Scourge in issue #347—but we’ll find out more soon enough. Meanwhile, it turns out Flag-Smasher is a man of principle as well, regardless of what anyone may think of those principles… which helps Cap believe him when he says he needs help destroying his own diabolical device.

Of course, Cap is not comfortable working with an enemy even when they share a common goal, but he realizes this is a less important principle than furthering that goal itself.

Cap, D-Man, and Flag-Smasher rush to the ULTIMATUM base with the Doomsday Machine, but before they jump out of the Quinjet on sky-skies—which Cap apparently takes to very easily—he asks for his buddy back. 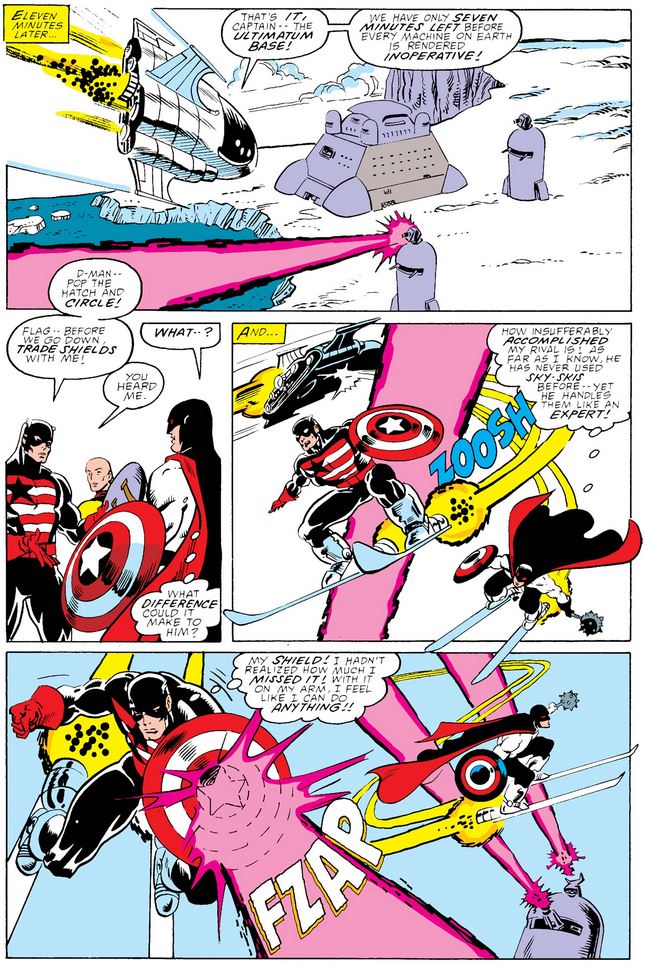 Once inside, Flag-Smasher explains what an EMP is (although they had been a mainstay in popular culture for almost a decade by then), and then shows that he’s a big fan of Watchmen. Unlike his hero Ozymandias, however, Flag-Smasher is no technical genius. 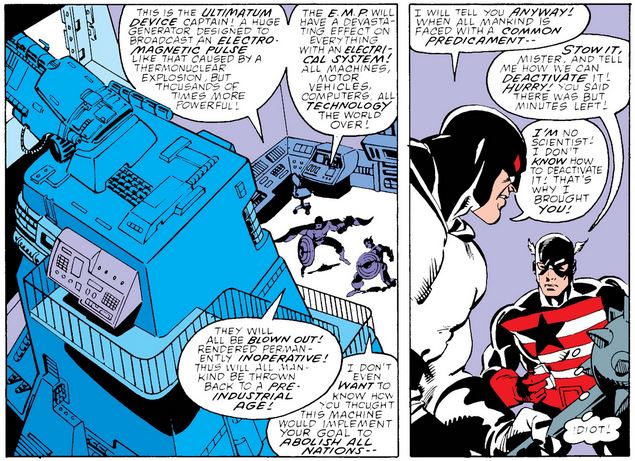 Predicting that Tony Stark probably won’t take his call—at least not until they have their little talk, which we’ll see soon—Cap comes up with his own best plan: Hit the machine with something big! But D-Man, charged with implementing the plan, also has to worry about the guys latched onto the Quinjet, and finds himself confronting a very Cap-like moral dilemma. 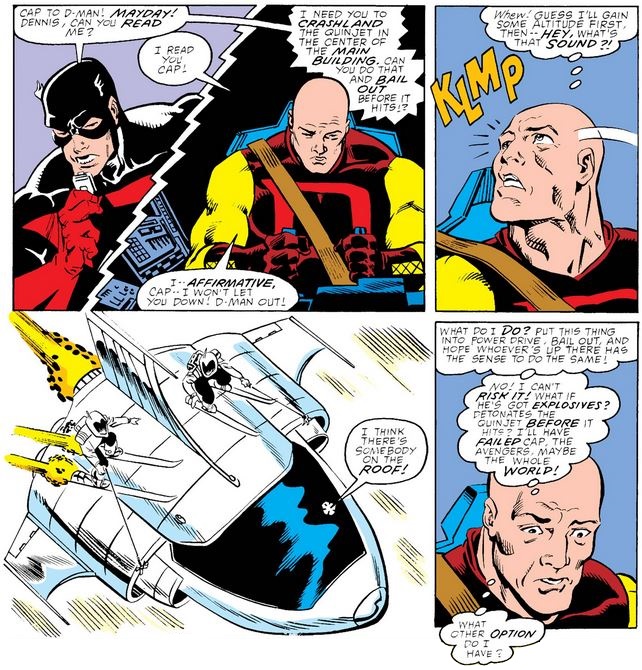 D-Man steps outside to take care of the ULTIMATUM agents, but one is caught on the ship, and D-Man is determined not to let him die when it hits the base—or when the bomb planted on the jet explodes, with no sight of D-Man parachuting away. 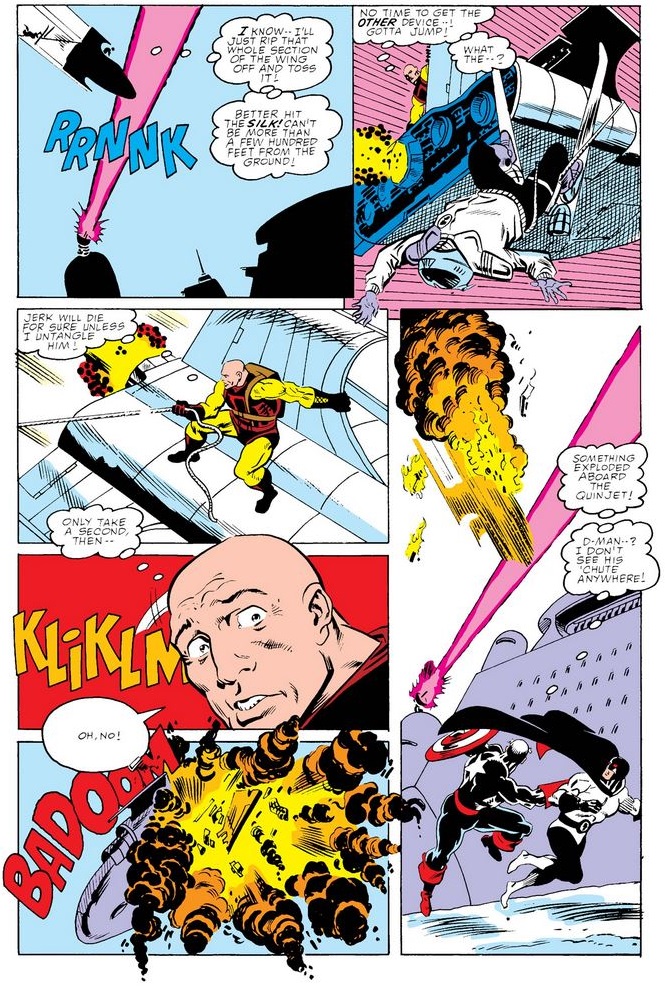 Cap can only watch as yet another partner apparently dies in a fiery aircraft explosion. 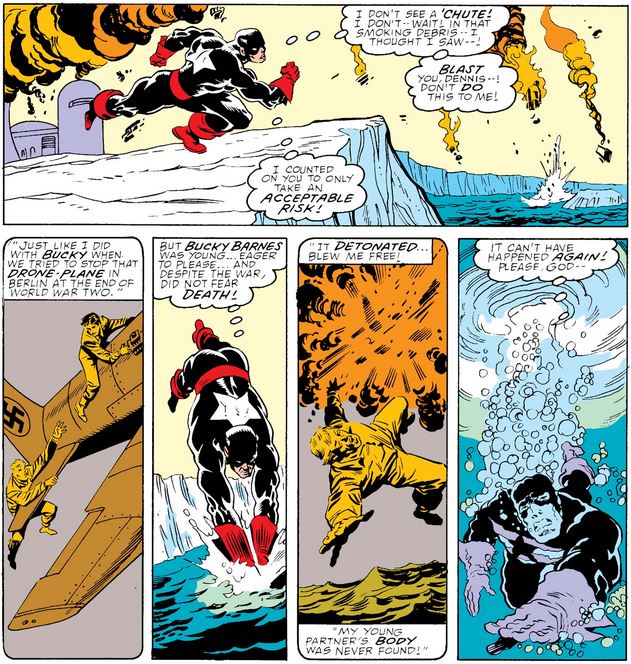 Before we finish, we should check in on Tony Stark in Iron Man #238, published the same month but actually taking place after Captain America #350. (Good job, editorial.) Luckily, this issue doesn’t directly reference anything that happens in that pivotal upcoming comic, so it’s safe to take a peek as Tony tries to patch up a valuable friendship now that the “Armor Wars” are over, and Steve generously and gracefully agrees. 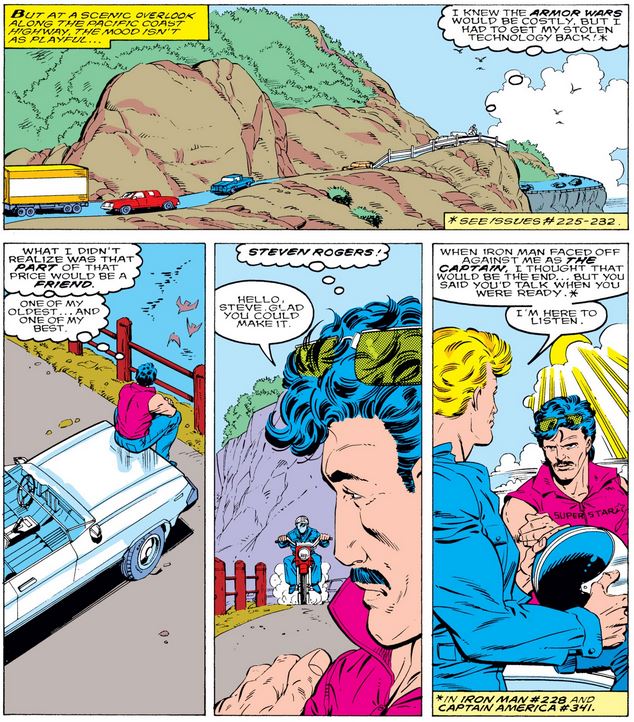 Tony seems more concerned about their effectiveness as Avengers, so he suggests that they keep their “disagreements” separate from “work.” Cap seems to agree, citing his pragmatic side as well as his principled one, although I don’t see what this decision has to do with the latter (which is usually his more characteristic aspect, to be sure).

Perhaps he is more concerned with saving lives and fighting evil as Avengers than prosecuting past wrongs, or maybe he just misses his old friend. (And Tony takes the whole Armor “Wars” thing a little too seriously.) 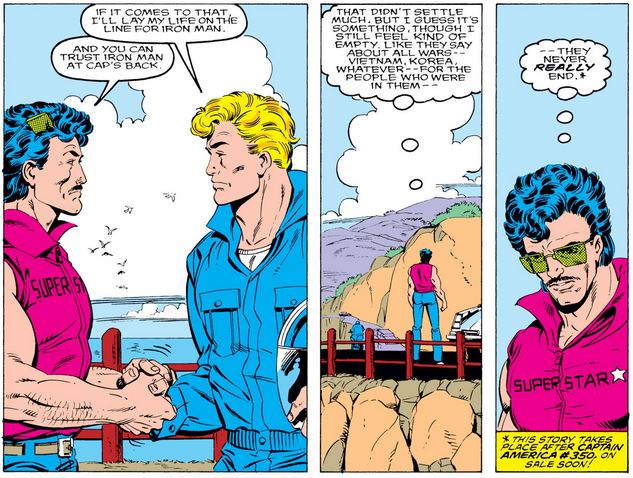 Get over yourself, “Superstar.”

Collected in: Iron Man Epic Collection: Return of the Ghost