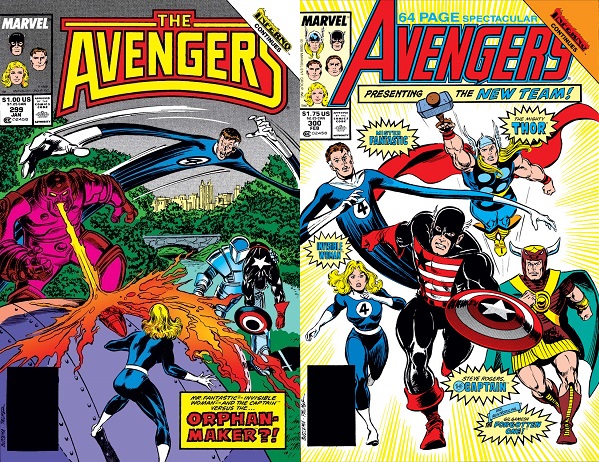 These two issues see the Captain assemble the latest Avengers team and it is… definitely something. It is also his last story before the landmark Captain America #350, after which everything changes (in Stan Lee’s sense of “change,” at least).

I’m impressed by how tightly the Avengers and Captain America comics were coordinated in these several months*, shuttling Cap back and forth between Washington, Hydrobase, the Arctic, and Manhattan over the last few issues of each title (and the 1988 Avengers Annual), with editorial footnotes galore to assure the reader it all fits (even if the old man must need a nap by now).

* This does not include Iron Man #238, which was released the month before Captain America #350, to which it serves as a minor epilogue.

Cap rides on to the next battle…

…and does not recognize the New Mutants, despite having met at least some of them (briefly) in Secret Wars II #9 and New Mutants #40. (Magik does look rather different, to be fair.) 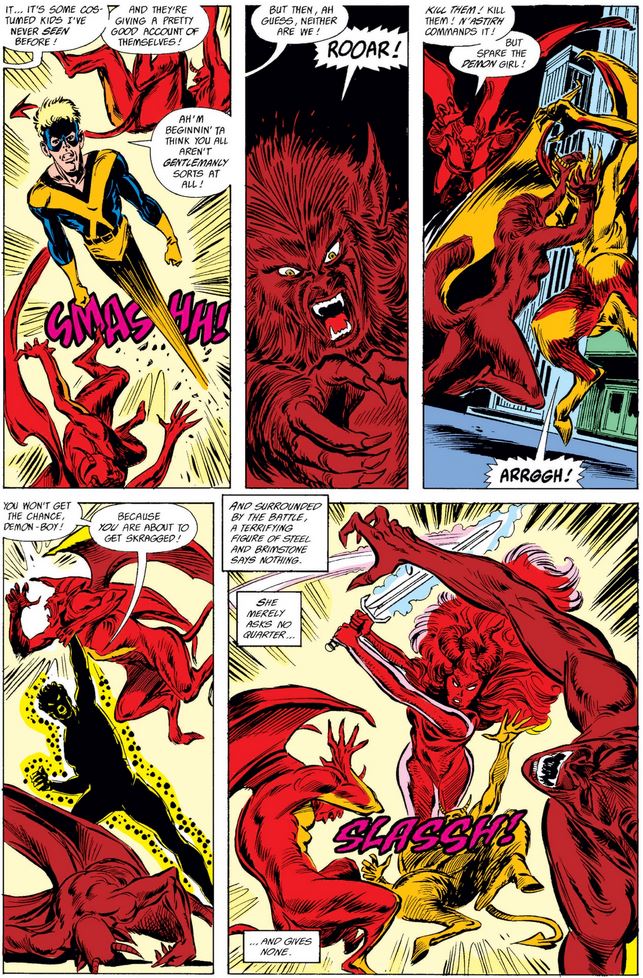 Many years later (Avengers, vol. 5, #2, February 2013), Cap will invite Cannonball and Sunspot to be Avengers. But for now, he doesn’t recognize them, and Cannonball’s not sure who Cap is either. <face palm>

“We’re friends from work,” got it.

In a clear sign that every other option has been thoroughly investigated and exhausted, Cap seeks out the help of Reed Richards (now living with Sue in Connecticut, where they moved in Fantastic Four #263 to give their son Franklin a normal life, ha ha).

Case in point: Just before Cap’s arrival, a mysterious figure named the Orphan-Maker abducted Franklin right out of Reed and Sue’s bed and then tried to shoot them, with Franklin’s psychic warning triggering Sue’s forcefield just in time. (This is why Cap finds the window open and Reed and Sue sleeping in a bubble.)

By now, Cap is understandably astonished whenever somebody sees through his clever disguise, and Reed is a little too proud of himself for it.

Reed tracks Orphan-Maker’s craft to New York City, and after the three arrive, Cap is the first to engage, with Reed assuring Sue that he’ll be just fine.

Orphan-Maker picks up Cap and prepares to fling him aside, but Reed grabs him just in time, and the two heroes show how well they can work together. (Hmm, maybe Cap ought to ask Reed to join… nah, that’s crazy talk!)

The battle continues while two new players arrive: first, a red-armored creature similar to Orphan-Maker, and then the big fella with the horns below, an Eternal named Gilgamesh (soon to be a big movie star), who shows up just in time to save Sue from Big Red, whom she realizes is actually Franklin. The complete cast is gathered together at the end of Act I below, including the fiend literally behind Orphan-Maker and Iron Franklin, a mutant named Nanny on a mission to save mutant children (as a part of the ongoing “Inferno” crossover).

If that weren’t wild enough, Kang the Conquerer joins the festivities in issue #300 (although he has little to do with the rest of the story as far as we’re concerned). But I have to point out that he too recognizes Cap almost immediately. (It’s not that hard.)

I don’t know exactly Cap is using “leverage” below…

…but I do appreciate his identification of Reed’s strategy as leverage below.

Eventually, Nanny and Orphan-Maker escape, leaving Franklin behind, sealed in his armor. Cap acknowledges the continuing danger for the young Richards (despite living a normal life in Connecticut), then turns to their new friend who, like the New Mutants, Cap has no recollection of meeting. (Walt Simonson does, however, having written both stories!)

Gilgamesh offers his services to Cap for his new Avengers team, and even though no asked him, Reed declines on behalf of himself and his wife, while ignorant of his son once again being abducted, this time by the demon N’Astirh (another aspect of the Inferno crossover).

Cap’s the first one to notice but isn’t fast enough to stop it, and naturally he assumes full flame, which Reed tries to lessen (while very smoothly deflecting any blame from himself). 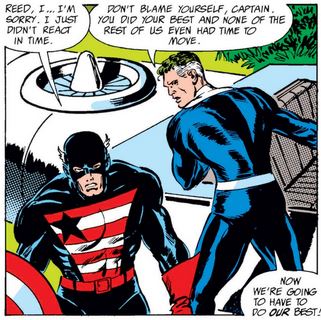 Cap’s latest Kooky Quartet gets to Manhattan just in time for Cap to see some familiar lightning.

Verily, ’tis the Mighty Thor, battling demons and, like everyone else, wondering who Gilgamesh is. Cap tells him not to worry about it, no one remembers him, and then recruits the Asgardian to their cause(s).

Speaking of which, Cap confronts the tragic dilemma of choosing which cause to pursue…

…until Reed makes the obvious suggestion that they split up. (That’s why he’s the genius.) But when they are attacked by yet another demon, who insists on tearing down building after building, they find themselves united again, and Sue reminds the others how powerful she actually is (while channeling Anita O’Day and Roy Eldridge).

The Incipient Avengers battle even more demons, and Cap takes a risk to let Thor fight at full strength…

…and seems to do more good on his own.

While he and Thor engage in glorious battle, Cap feels the “spirit” in him, and makes the call. 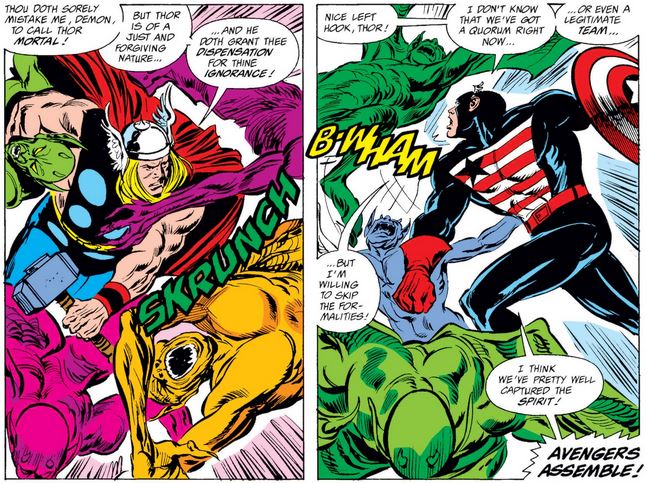 After Sue rescues Franklin from having his life force drained to help power the demons’ portal to limbo, the non-FF Avengers take the chance to teach the abandoned demons some lessons (or not, in the case of Cap).

Cap all but invites Gilgamesh to formally join the team… and is that a reference to Tigger from “Winnie the Pooh” at the end? (Cap can never resist a good literary quote.)

Cap makes the invitation official several pages later, reiterating that yes, Gilgamesh, there will be monsters. (Obsessed much?)

Crisis averted, Reed and Sue invite the boys over for milk and cookies… and we learn that Cap is very picky about his cookies. 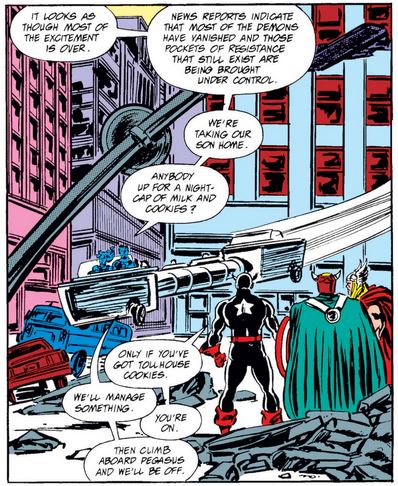 Cap finally asks the question Reed pre-emptively answered above, but that answer has changed, and he even “lets” Sue answer it this time.

As we will see in upcoming issues, Cap will come to regret praising Reed’s “leadership experience,” as it will come to clash with his own.

Finally, we have a new Avengers team (such as it is).