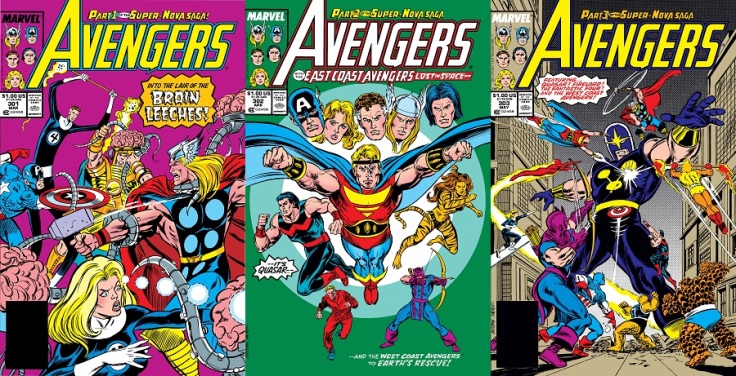 For our purposes, these three issues of Avengers are notable mainly for the conflict they show between Captain America and Reed Richards, both accustomed to leading their teams while only one presently does. As a bonus, we see the opening page from an issue of Thor that does not seem to fit where it’s supposed to, but that is the mystery of a shared universe mapped onto funny books in real time!

After an opening splash of Thor, Avengers #301 features a two-page spread showing the team’s aquatic headquarters Hydrobase being relocated in New York Harbor, after which it is renamed Avengers Island. (I would also highlight the return of classic Avengers penciller Don Heck on inks in this issue.) The panels at the bottom of the image are of interest here: In the leftmost one, the exposition emphasizes Cap’s role in the new line-up as well as his resumption of the Captain America identity in Captain America #350 (which is an abrupt change since the last issue of Avengers).

Cap already sees trouble coming between him and Reed, although he does value the contribution Reed and Sue stand to make to the team. (Although, note that he does not cite Reed’s intelligence as one of their contributions!)

Before long the team is summoned into space by Starfox to confront Super-Nova, a man possessed of all the powers of the Nova Corps who is searching for Nebula and already defeated Firelord in the process… none of which matters for our purposes, especially when Cap is assuming the Thing’s customary role of giving Reed a hard time for going overboard with his scientific explanations (for which Sue is appreciative).

After the Avengers find Super-Nova’s ship and they board it, Reed takes charge, which bothers Cap even while he admits that Reed may be better suited to guide the team on a space mission (much as the Wasp, when she led the team, often ceded leadership to Cap on the battlefield). 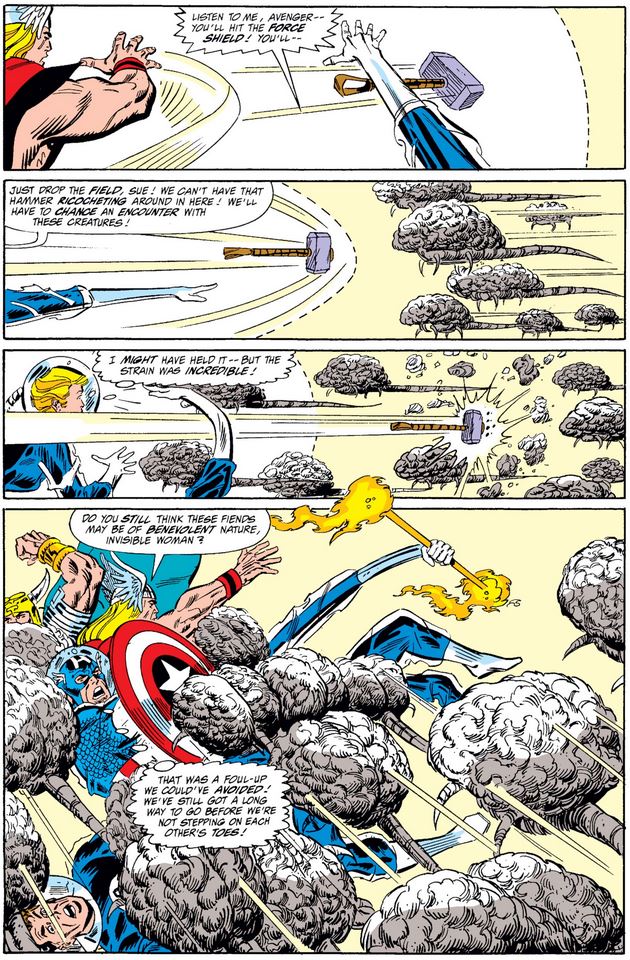 Above, Cap bemoans the lack of teamwork among the latest assemblage of Avengers, as he often does when membership changes—and even after they defeat the strange creatures, Cap continues his thought below.

Reed has a theory regarding what the wee noggins were, but he is too interested in studying them for Cap’s taste…

…which reflects the difference between the Avengers, the prototypical superhero team, and the Fantastic Four, more often characterized as adventurers and explorers.

When they find Firelord, Reed takes it upon himself to free him using Firelord’s own baton, which is the last straw for Cap.

Super-Nova shows up at the end of the issue and… well, goes super-nova, blowing up his ship in the process, with the Avengers inside it.

Avengers #302 starts out focusing mostly on Quasar and the West Coast Avengers getting involved, especially after Hawkeye calls Peggy. 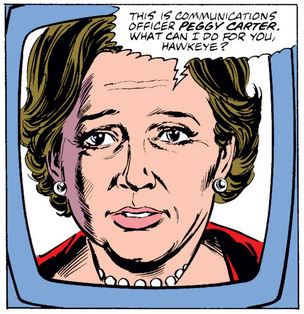 Eventually we see how the Avengers survived the explosion: in Sue’s force bubble, which she heroically holds together through space and then as it descends through Earth’s atmosphere. Note how Sue silently acknowledges her own accomplishment while Reed admires Thor (although, to be fair, Reed did praise Sue’s quick thinking in the first panel). 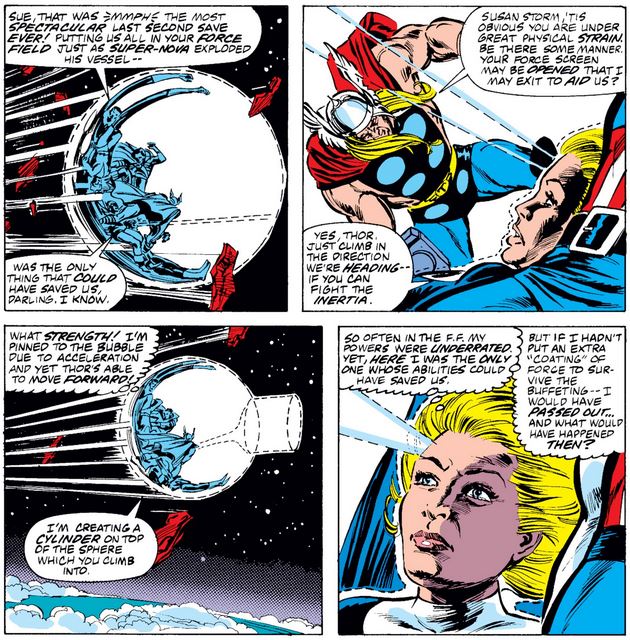 Even Thor has to respect Sue’s abilities (in his own way).

Cap has been unconscious this entire time, but revives once they are closer to the ground and Sue can let bubble go. Thor not only catches his own friend but pays him a grand compliment at the same time.

In Avengers #303, the battle against Super-Nova reaches fever pitch, with the West Coast Avengers and Quasar joined first by the Fantastic Four—now three, with Cap’s old friend Sharon Ventura, now She-Thing, taking the place of Reed and Sue—and then the Avengers, with our hero easily taking command of the situation, liaising with the military while sending out his own “troops.” 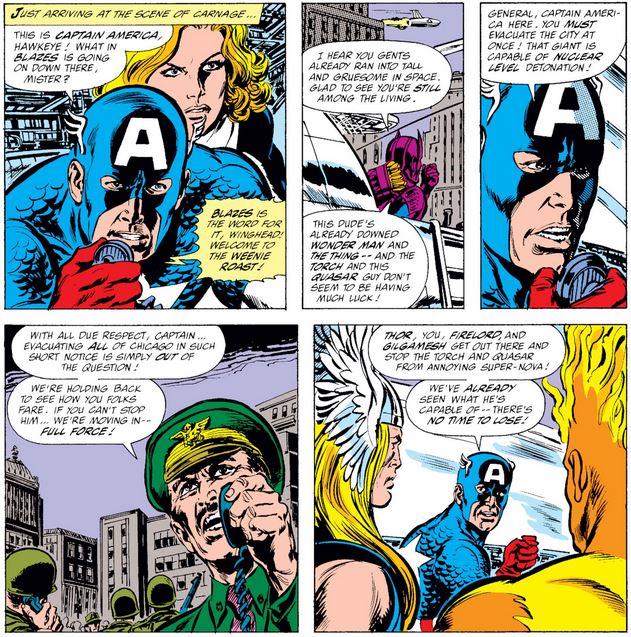 When he directs Sue to a defensive position, Reed offers to support her, but Cap needs him elsewhere…

…and when Reed resists, Cap has just about had it (which Sue understands). 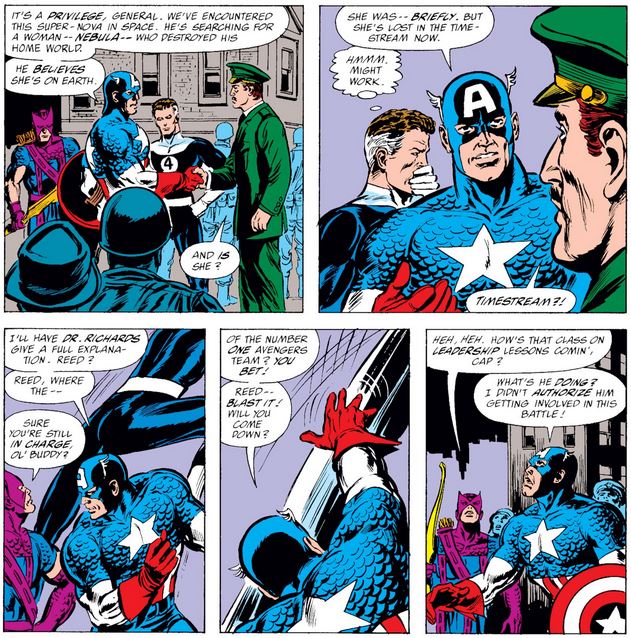 In the end, Reed does save the day by tricking Super-Nova into the timestream using Doctor Doom’s time platform. Unfortunately, Cap cannot join the others in the ensuing congratulation.

Finally, in Thor #402, the Asgardian bids farewell to his teammates after “his first adventure with newly reformed Avengers,” but the setting, as well as Cap’s costume, seems to indicate this follows the adventure recounted above, which would be his second, rather than Avengers #299-300 as indicated in the editorial footnote. And Cap tries to get his number at the palace, but with no luck. 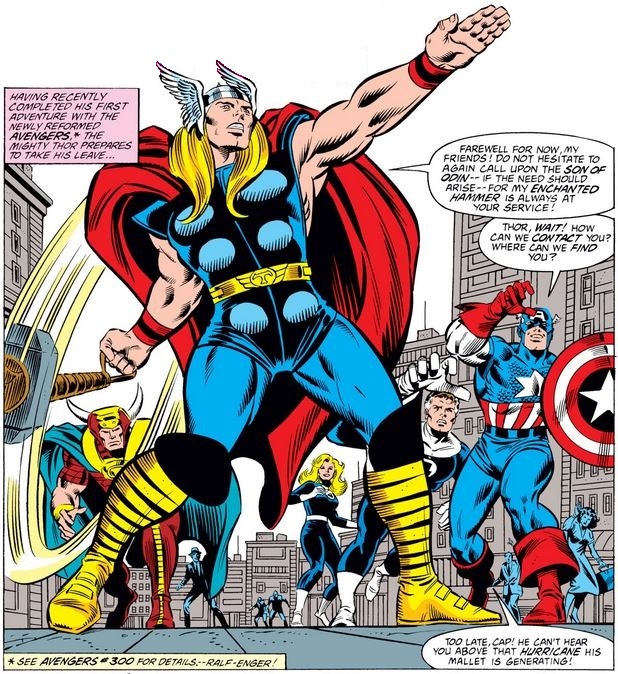 Thor returns in Avengers #304—maybe Peggy knew how to get a hold of him!