This issue serves as an aftermath to last month’s game-changing issue #350, a breather if you will, that reintroduces a beloved classic supporting character, reconnects Captain America with an old pal (and explains the recent tensions between them), and signals a change in the fortunes of one John Walker after his abbreviated term as the Sentinel of Liberty.

Speaking of whom, the issue opens on a press conference to announce the return to Classic Coke, led by Valerie Cooper, who appears sorely out of her depth with public speaking. (Don’t miss Battlestar seated behind them.)

Note several things with respect to the panels below: 1) How artists Kieron Dwyer and Al Milgrom draw the two Caps’ faces and builds differently in the first two panels—always appreciated, especially in this context; 2) how Cooper glosses over the history of Rogers’ resignation and Walker’s recruitment, and 3) how Walker implies his personal discomfort with the expectations of the role even as he puts it in terms of how best to serve the American people.

Cap sees the assassin in the uniform of the Watchdogs, the domestic terror group Walker faced off against several times as Captain America, and starts his pursuit with an impressive vault. 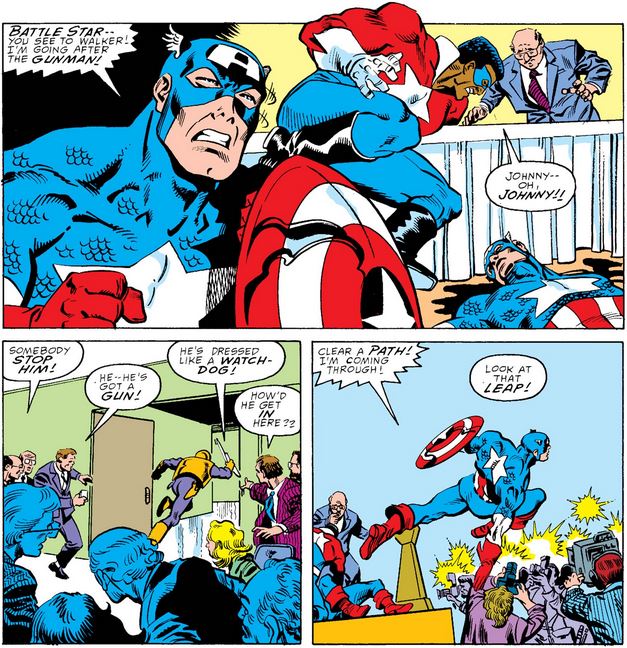 But the gathered press want a soundbite, hardly endearing themselves with the returned hero, who is more concerned with catching the killer while protecting the surviving innocents.

…only to see him killed as well, by someone Cap has assumed was dead (in what is becoming a disturbing trend).

…and then interviews Cap, introducing him as the leader of the Avengers, which I didn’t know was made public or even official yet, seeing that the team was just reconstituted last month in Avengers #300. 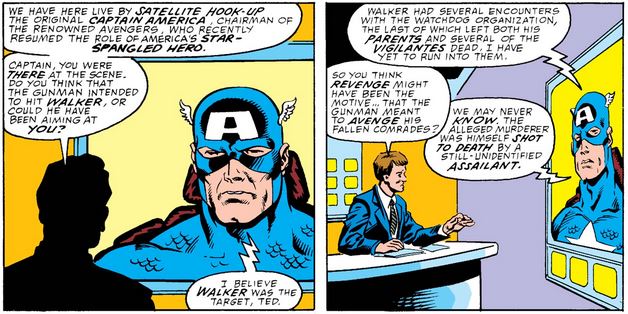 After asking about the target and motive of the assassination, Koppel presses Cap on what Walker’s next move might have been had we lived, and then Battlestar’s… maybe they should have used Barbara Walters instead!

Cap couldn’t end that interview quickly enough, because he has some important pondering about death to do before updating himself on recent Avengers events (as a newly appointed chair would do).

Before we get to what he learns from the files, let’s spend a moment on his ruminations above. First, he thinks to himself that, regardless of how he felt about Walker or what he stood for, he wouldn’t have wished him dead (of course), but also that he “never would have denied him his right to life, liberty, and the pursuit of happiness, even if his acts denied others theirs.” But that’s exactly what criminal punishment is, and the last part implies he believed Walker committed criminal acts.

Second, and far less serious, his comment about villains returning from the dead while, when heroes die, “it’s for good,” is hilarious given his history of superhero comics in general, and especially the fact that all three of the departed friends he thinks of do eventually “come back from the dead.”

Anyway, back to the files: Cap reads something about his pal Nick Fury that he just cannot believe, and can’t contact anyone at SHIELD, so he reaches out to another old friend.

Remember how Ted Koppel started his report by saying how the original Captain America’s secret identity was “a closely guarded secret”? Not for long, judging from how he dresses below as he shares a coffee with his first true love.

Peggy isn’t exactly sure, but cites recent trouble on the SHIELD satellite that resulted in the death of a third of the agents (seen in the Nick Fury Vs. SHIELD miniseries), triggering Steve’s current preoccupation with death before he notices Nick Fury’s car outside.

The two friends leap into action, with Steve reminiscing about his time with SHIELD in the past, before they head into SHIELD’s old Manhattan base…

…finding Nick’s car but no Nick. But this does lead Peggy to ask Cap (after he sheds his meager attempt at a disguise) why he’d been on the outs with Fury and SHIELD lately (which I’d wondered about in the post of issue #321), and his answers are interesting, especially his first one about a national symbol for freedom and justice working for a covert spy agency. (Fair point!) 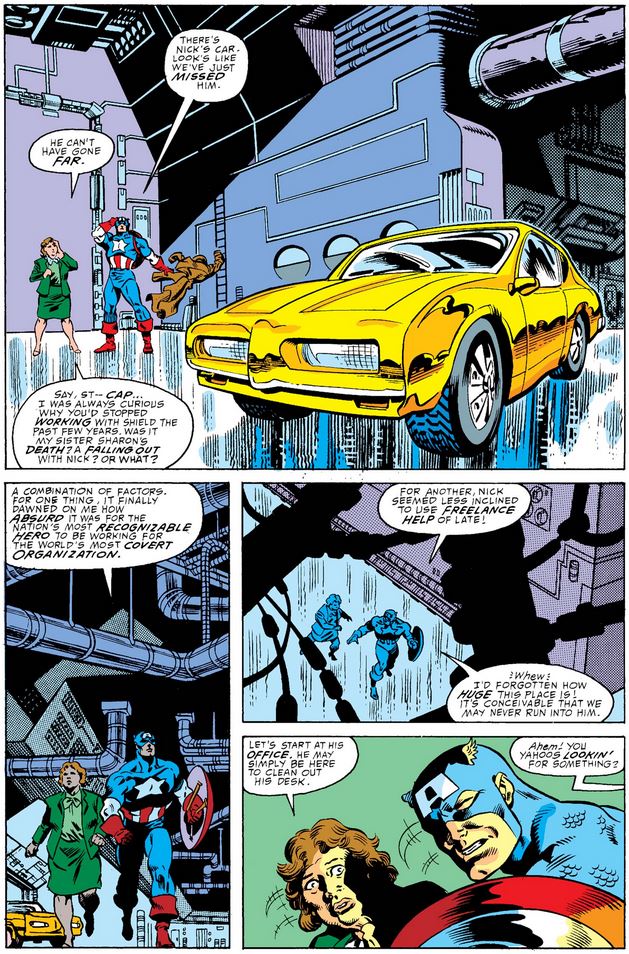 Nick Fury shows up, along with Dum Dum Dugan and Gabe Jones, and Cap admits that his recent troubles don’t compare to SHIELD’s.

The World War II veterans start cleaning out the SHIELD facility, with Cap relieved that their cache of high-tech weapons will be destroyed…

…but admirably is just as concerned that the raw materials don’t go to waste, and Fury reveals his heart is really green.

That noise is the facility, specifically all the machinery and computers, turning against Cap and His Amazing Friends, incapacitating Peggy, Gabe, and Dum-Dum, and apparently killing Fury. (Just what Cap needs at this particular moment.) 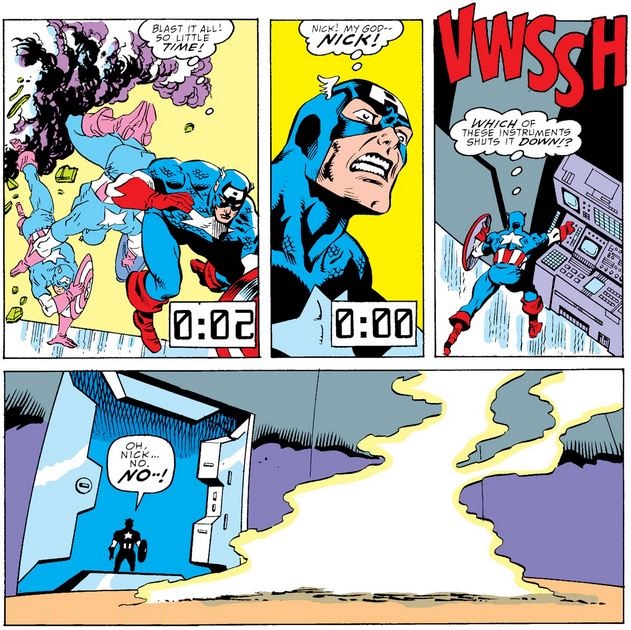 “Why does this keep happening to me?”

Cap considers who could be behind this before he is rescued by a recently departed friend. 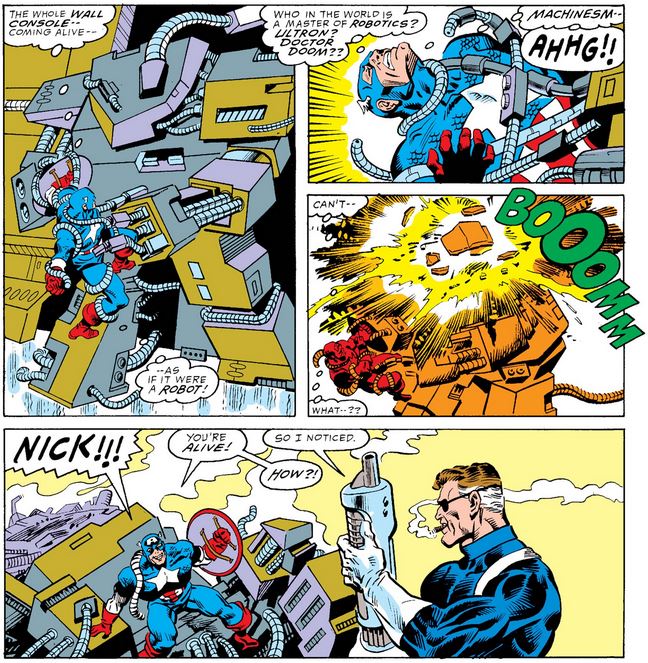 See, Cap—heroes do come back!

The attack ends after Fury destroys the mainframe, after which Cap offers Peggy a job. 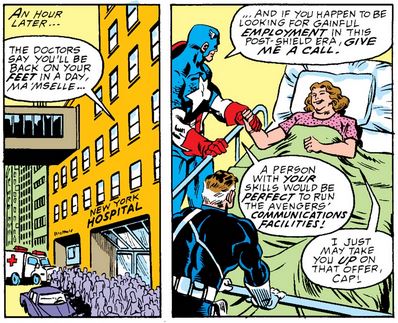 Next, he invites Fury to join the Avengers, which gets the same reaction my former college provost got when he asked me if I’d be interested in becoming a dean.

The issue ends with news about John Walker.

Come on, you knew he wasn’t dead—and we’ll find out what happens next in issue #354, after a strange two-part story involving a lot of super-powered Russians.