This is it: the issue we’ve been waiting for ever since Steve Rogers resigned his identity of Captain America to the Commission on Superhuman Activities in issue #332 and the Commission replaced him with the former Super-Patriot, John Walker in the following issue. Whatever else happens in this issue—I’ll get to it in a second, settle down—at least we see Rogers and Walker face to face for the first time as Captains. (And I have no idea what the cover means by “the dramatic return of the Red Skull”… I’m pretty sure he’s dead. You guys at Marvel, always foolin’ around.)

I mean, I’m sure the Steve Rogers lookalike below, facing a boy-band full of Caps, has nothing to do with the Red Skull…

…although he does defeat them all, then kills them, and celebrates it while reveling in the way he’s managed to take advantage of America’s political system to advance his own goals: domination and destruction of the country itself.

Sure sounds like the Red Skull… must be a coincidence, though.

Meanwhile, Cap is reluctantly buying the Daily Bugle and checking in on his neighbors, while young Bernie takes a break from reading Tales of the Black Freighter.

Cap laments the fact that mutants are being vilified once again, this time for the recent Inferno craziness (seen in Avengers #298 and Avengers #299-300), and comes up with the idea for the Avengers Unity Division, only 23 years before he actually puts it into effect. (Better late than never!).

Just as he begins to affirm his commitment to find the people behind his Commission difficulties, were it not for the never-ending emergencies that seem to pop up on a monthly basis, an emergency pops up, and he goes into action.

Annnnnd we’re back to people not recognizing him again… sigh.

Apple pie—nice touch! (I suspect the kid wants to go again.) A welcome bit of levity after an intense year-and-a-half in this title.

In Washington, Douglas Rockwell fails to persuade the rest of the Commission to keep Walker on as Captain America, which he then has to report to his real boss, not the president but the imitation-Steve Rogers seen above. But just then the real Steve Rogers shows up, threatening to expose Rockwell’s duplicity to the Commission, and dropping off his shield, which he got from Flag-Smasher in the last issue (after he took it away from Walker in issue #348). 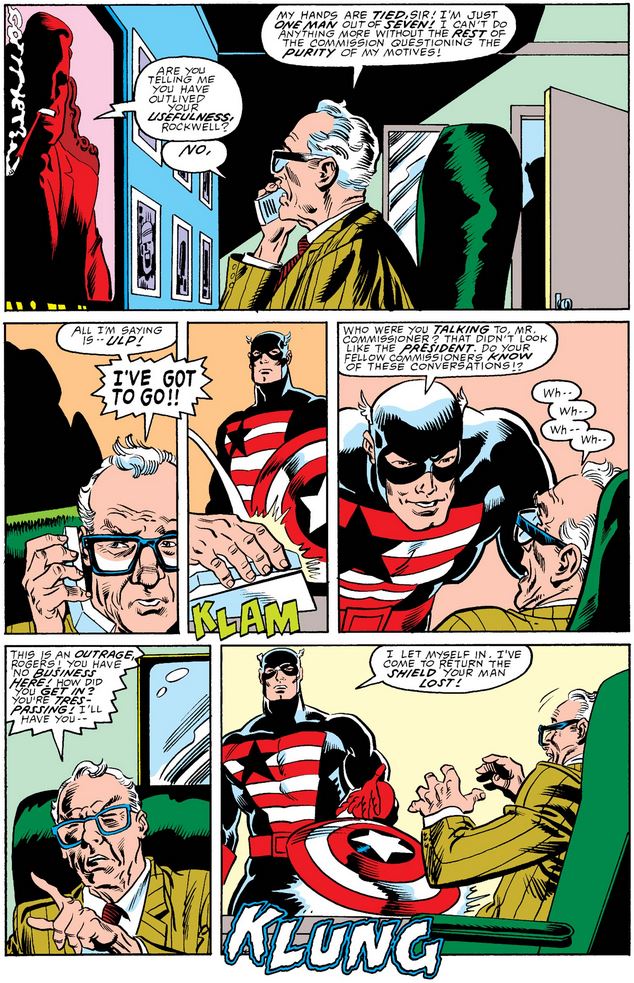 Cap tries to get to the bottom of the vendetta Rockwell, or whomever he’s working for, has against him, but they are interrupted when Rockwell gets an ominous call…

…that helps explain why no one likes to answer their phones these days.

Cap gets the subtle hint, but he also remembers that the Red Skull died in issue #300, so concludes that it must be someone using the Skull’s tricks. This is not naive but quite reasonable, given the nature of his death and the subsequent destruction of his body by his daughter Sinthea in issue #301. (The Skull has been presumed dead before, only to reappear alive, but his body was never found those times.)

Meanwhile, the Rogers lookalike calls Walker in and pretends to be the real deal before doing the job Rockwell couldn’t: taking care of Walker by forcing him to fight armed men dressed like the Watchdogs, ULTIMATUM, the Scourge, and other groups Walker faced.

We’ll see what happens to Walker later, but for now, Cap went to where he traced the call to, and is greeted by the false Steve Rogers, who’s not as surprised to see him as Cap had hoped. 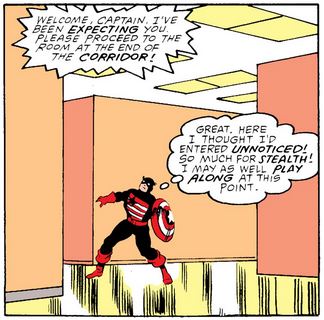 “Please to meet you,” the false Steve says, “hope you guess my name.” Cap admits what he’s been led to think…

…but claims it’s impossible, which is only confirmed when he’s shown the video footage. What’s puzzling Cap now is the nature of the false Rogers’ game, although he won’t admit it, even when his foe claims to be both the Red Skull and Steve Rogers.

Cap plays himself a deep cut in his head before the supposed Red Skull goes full Bond villain, delivering a classic movie line before explaining how he has been behind everything that’s gone wrong for Cap for long before he gave up his identity…

…and culminating in how the broken Walker has dragged the name of Captain America through the mud, all according to plan, as he is doing to the name of Steve Rogers himself. (Sure sounds like something the Red Skull would do. If he weren’t dead, I mean.)

Cap apparently doesn’t think this guy “acts” like the Red Skull—I wonder if the fact that the Skull now wears Cap’s face is affecting his judgment. But for now, Cap is more concerned about Walker, having been unaware until now that the former Super-Patriot is the current Captain America, and is determined to find him, no matter how long he has to… 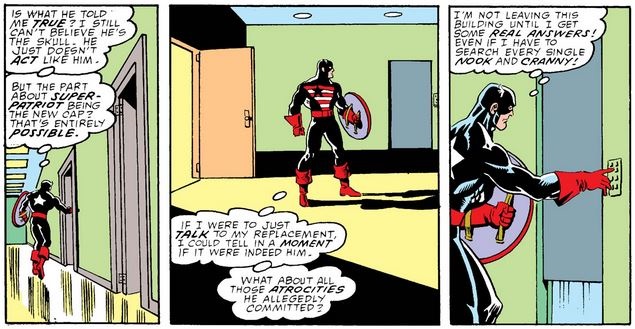 …look for him ohnevermindthereheis. Unfortunately for Cap, Walker has just finished beating up (and possibly killing, from the sight of all the blood) the guys “Steve Rogers” sicked on him, and he’s not very happy about it.

As their long-awaited battle starts, Cap puts two and two together, and also remembers that Walker is much stronger than him (and a little off his rocker to boot). 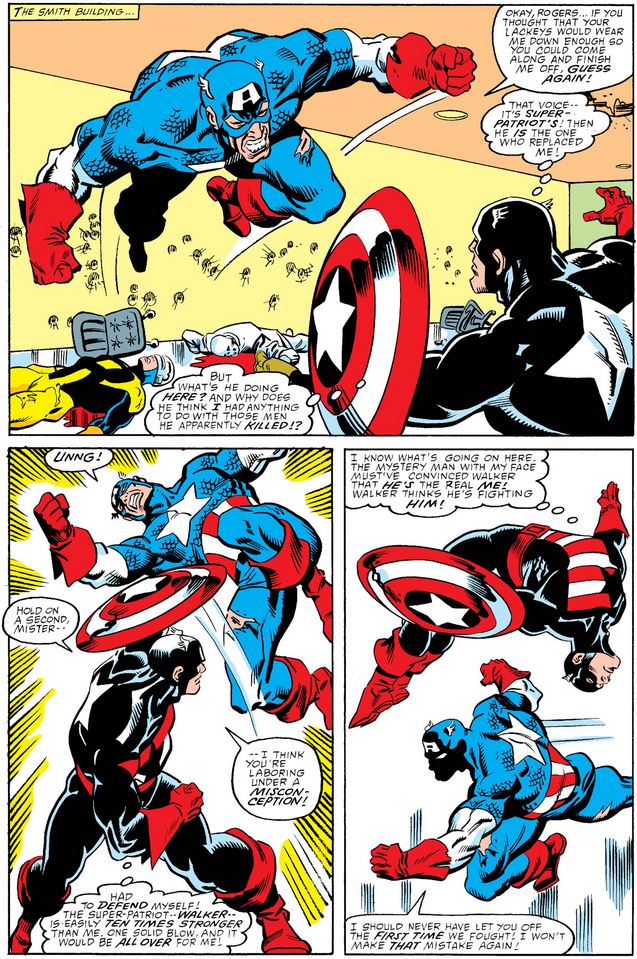 They fight for a good while before Cap is confronted with visual evidence of how Walker bloodied the name of Captain America. He wonders why he’s being shown the scenes now…

…and all but answers his own question.

The page below calls back to Cap’s early fights with Walker as he takes the chance to prove to himself, after all this time rebuilding himself as the Captain, that he’s worthy, at least in a physical sense, of reclaiming the title of Captain America that he all too easily gave up before. 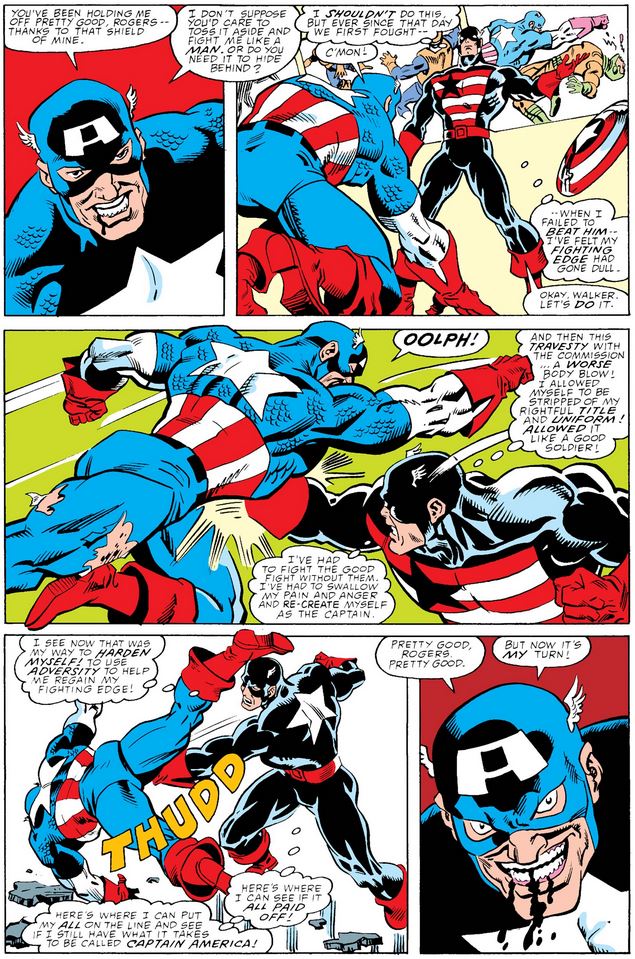 They continue to fight until Cap tricks Walker into putting his fist into an electrical panel, which electrocutes him temporarily, but in the end he withdraws his fist with some electrical wiring and strangles Cap with it, cackling with mad glee. Cap has one more chance… 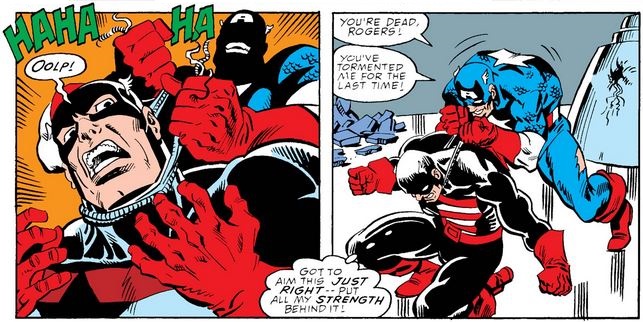 …and he takes it. (Did they both yell “EAAH!” at the same time, or is Cap echoing Walker… even mocking him? Nah.) The victory has tremendous symbolic meaning for Cap, but he doesn’t have time to reflect on it.

At least, Cap meets his lookalike face to face…

…and has to endure a continuation of the false Rogers’ Bond-villain speech, this time emphasizing that he’ll achieve his destructive ends from inside the system, now that he looks like America’s golden boy himself. 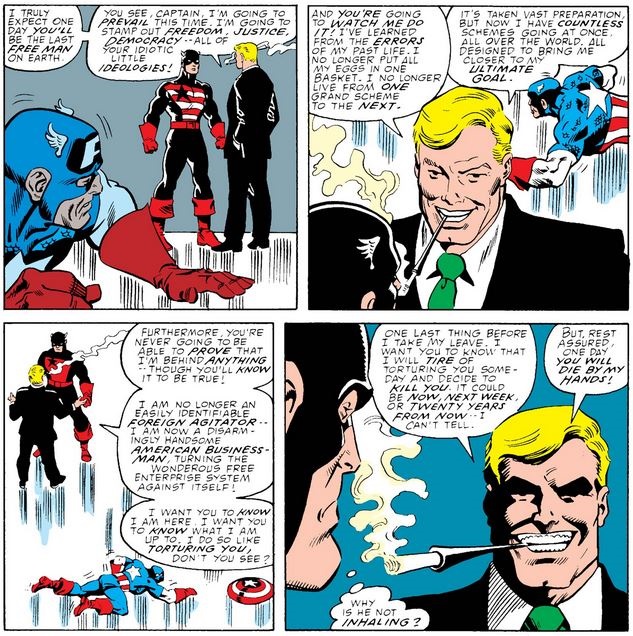 Although it is Cap who notices his lookalike’s quirk, it is Walker who inadvertently exploits it when he attacks the fiend with the shield, forcing him to inhale what Cap recognizes as the Red Skull’s poison gas.

The false Rogers’ face is transformed into the Red Skull’s… but unlike previous victims such as Rockwell, he does not die, which is just one more reason for Cap to believe that this may actually be his arch enemy in the not-so-dead flesh.

After whoever-he-is escapes, Cap reconnects with Walker, admitting that he’s still not sure his lookalike was actually the Red Skull, but is more concerned with settling the matter of who will wield the shield? (Amazing how often this question comes up.)

Soon, Cap and Walker stand before what remains of the Commission—note the difference in their stances, Walker tight at attention while Cap is striking more of a “power pose”—whom Cap updates on what he discovered about Rockwell and his true boss. In turn, Valerie Cooper acknowledges that Steve Rogers was responsible for vesting the identity, costume, and shield of Captain America with its meaning…

…and tells Walker to render unto Cap what is Cap’s. But Cap doesn’t seem to want it anymore. 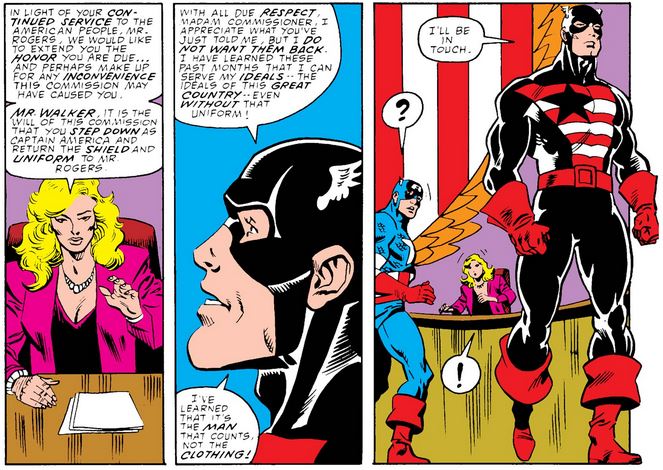 Frankly, I find this a bit confounding, but I try to keep in mind that Cap is experiencing many conflicting emotions in this moment. On the one hand, as he says above, he has performed well as the Captain, and his victory over Walker earlier restored his self-confidence. In addition, there may be some lingering resentment toward the government that rejected him—a government that was manipulated by outside forces, to be sure, but also a government that let itself be manipulated, and fairly easily from the looks of it. On the other hand, he has also come to realize over the last few issues how much he misses serving the American people, not just as a costumed hero but as Captain America—a name that definitely needs redeeming after Walker’s recent actions, as was all too clearly shown to Cap earlier.

In the end, it takes the most unlikely person to convince him to reconsider.

Rather than convincing Steve Rogers that he needs to be Captain America again, as we might expect, Walker makes him think about who might get a job next… possibly someone even less well suited to the job than Walker (by his own admission).

Walker helps Rogers realize that he must redeem and protect the legacy of Captain America by reclaiming it, and so, for the first time since issue #332, Steve Rogers is once again Captain America… and he sure looks happy about it.

Note that the exposition above implies that D-Man, who gave Rogers the black uniform he wore as the Captain in issue #337, is dead. I wouldn’t be so sure…

So… was the Rogers lookalike actually the Red Skull? (I mean, he is dead.)

Although Cap is still not sure, the back-up story in this issue confirms that it was in fact the Red Skull, and explains his return to life (as well as his entire history to that point). In short, Arnim Zola “saved” the Red Skull’s consciousness from his dead body and transferred it into a clone of Steve Rogers, grown from DNA taken from him while he was the Skull’s captive in issue #297, complete with the effects of the super-soldier serum. (I know, I know—just go along with it.)

Also in this issue are several profile pages of supporting characters, including Cap’s love interests (drawn by Ron Frenz and Joe Sinnott).

Some of these are a bit of a stretch, although I guess they were all technically “in his life” to some extent (although I think there is a strong implication of more). Holly Riddley, mother of Cap’s computer pal Ram, gets a place, even though they only had one almost-date,. Donna Maria Puentes worked with Cap in one story, although she will soon join Peggy Carter—who returns in the next issue, by the way—in the “Avengers Support Crew.” And Diamondback’s inclusion is a little premature at this point (but Mark Gruenwald obviously knows what’s coming!).

We also get a helpful spread of all the (ahem) Captains America to this point (drawn by Tom Morgan), although it is disturbing to see the 50s Cap, William Burnside (not yet named in the comics), in his Grand Director outfit, complete with swastika armband.